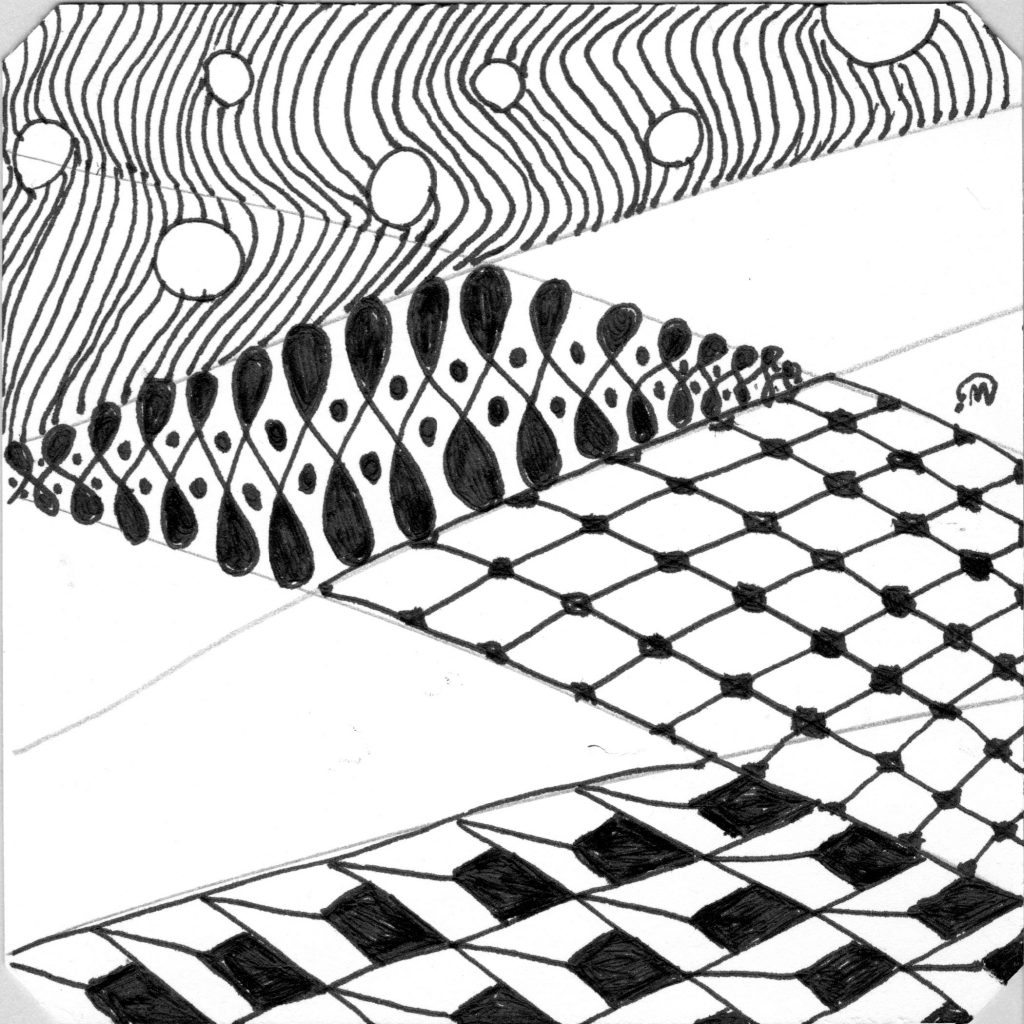 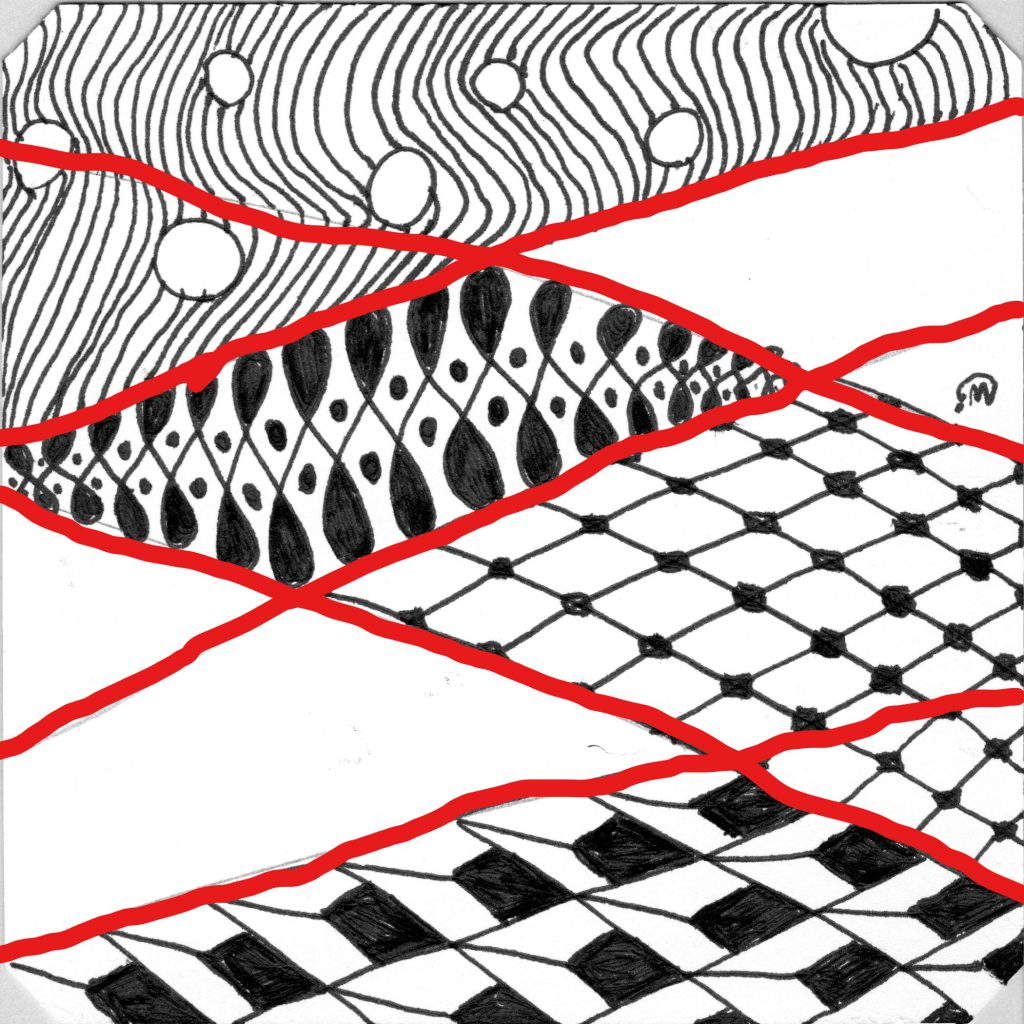 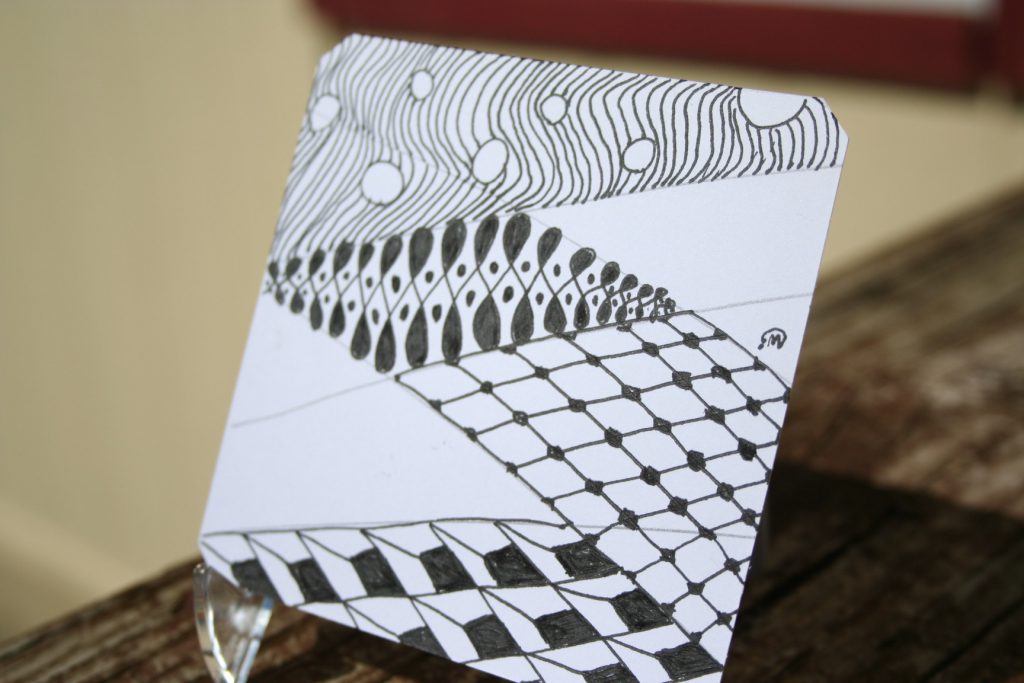 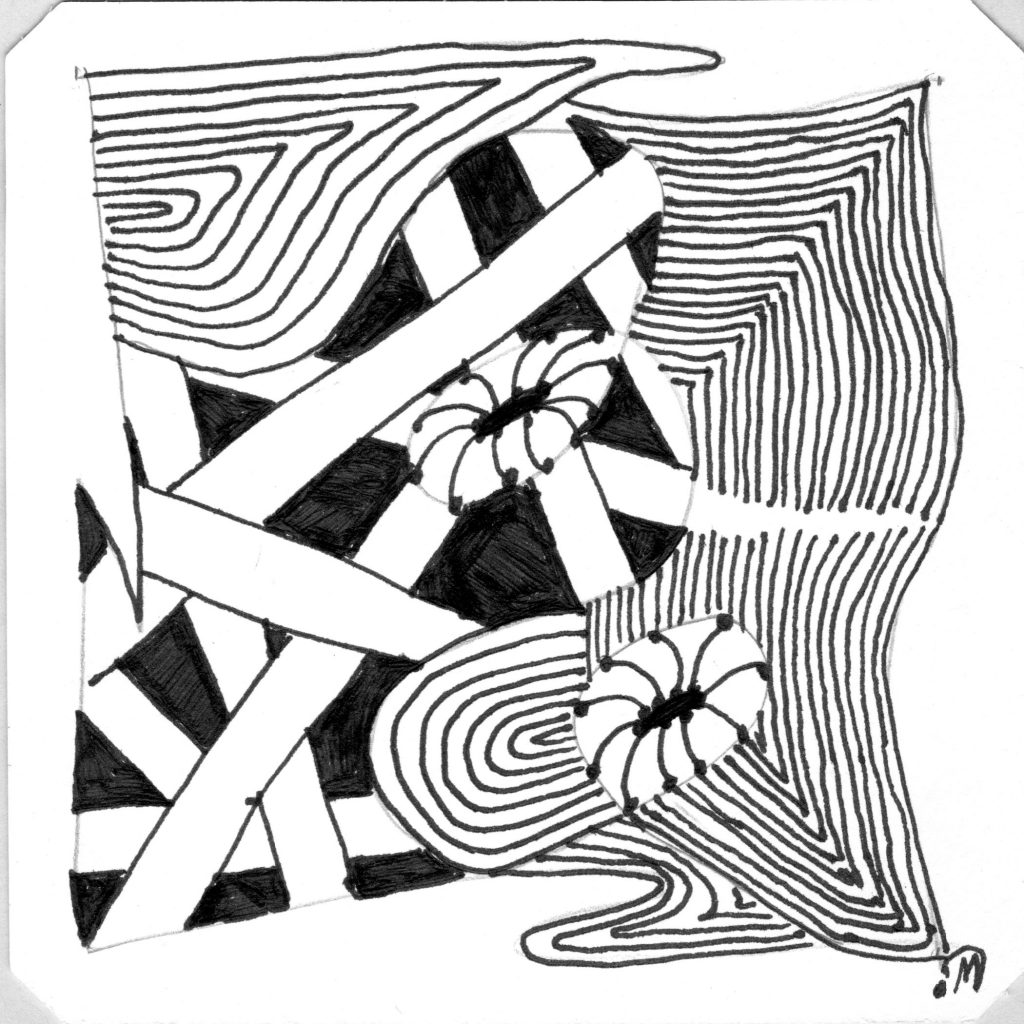 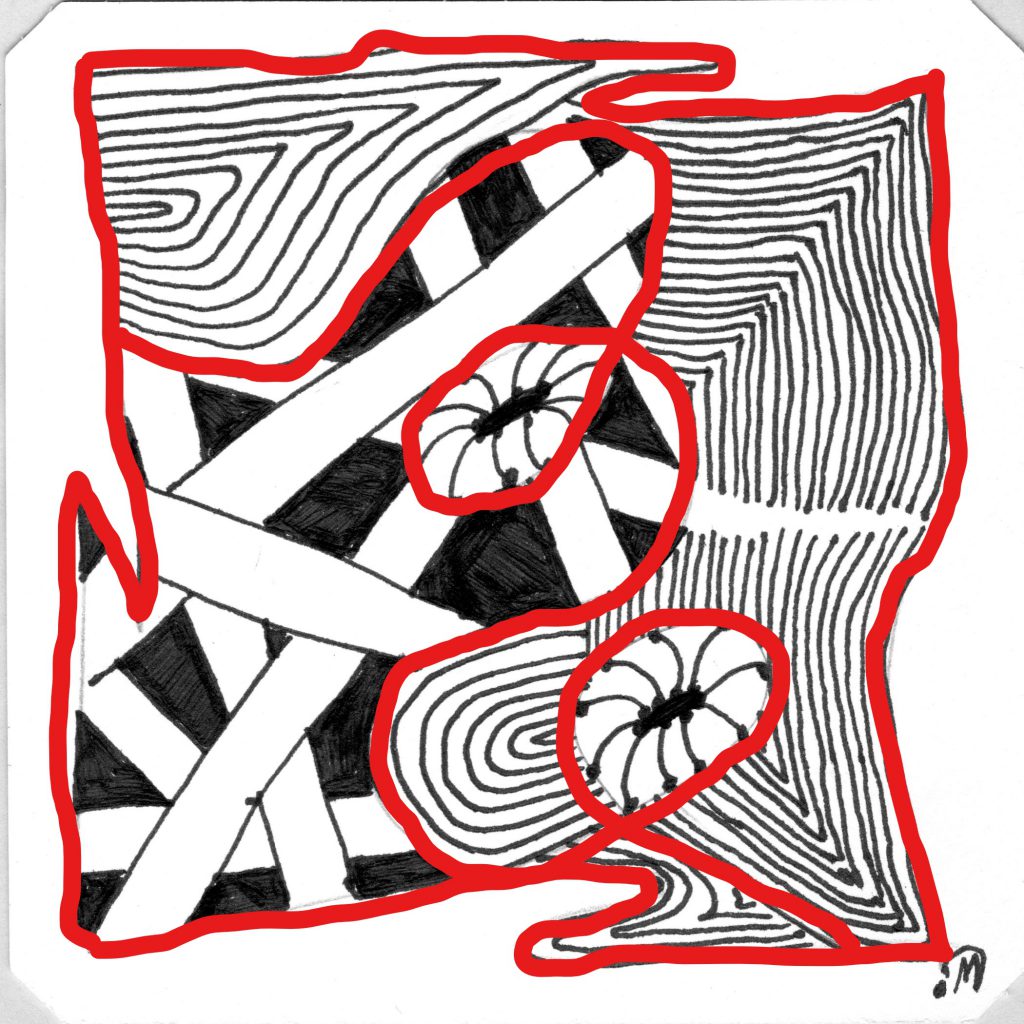 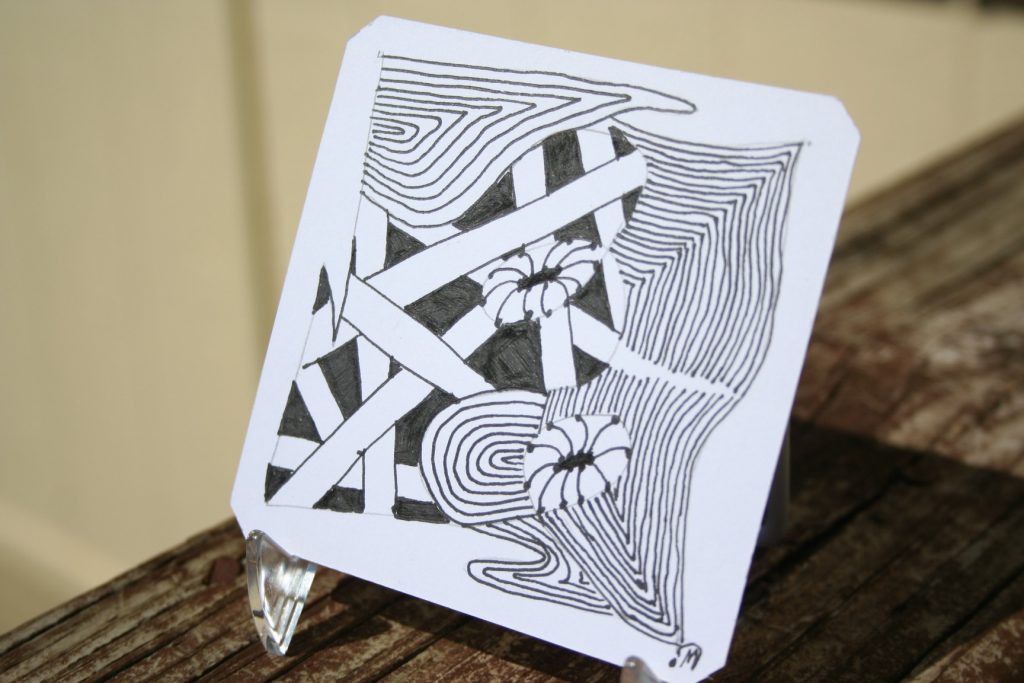 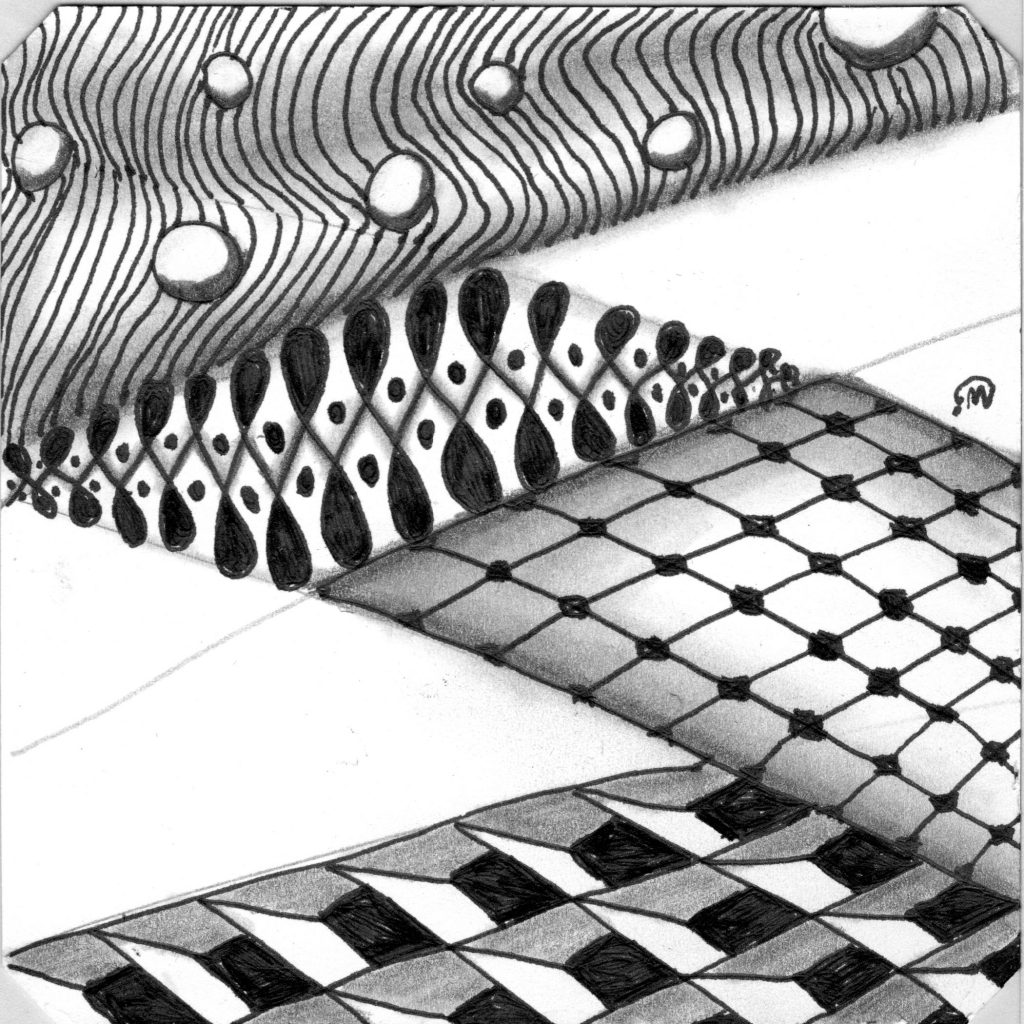 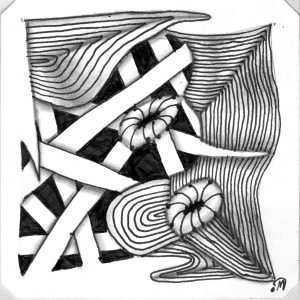 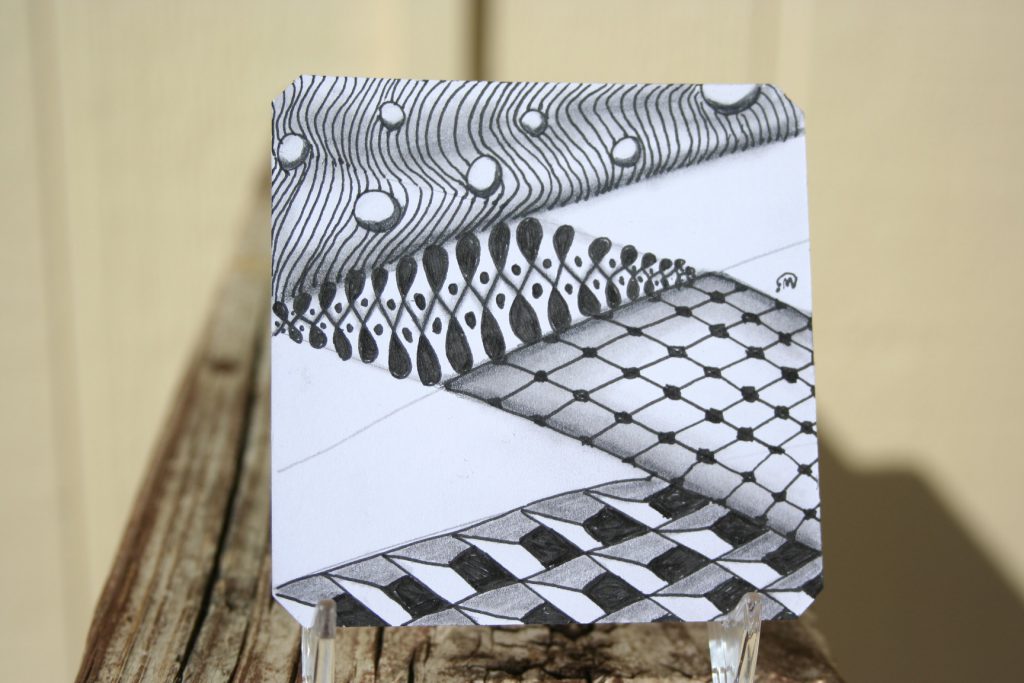 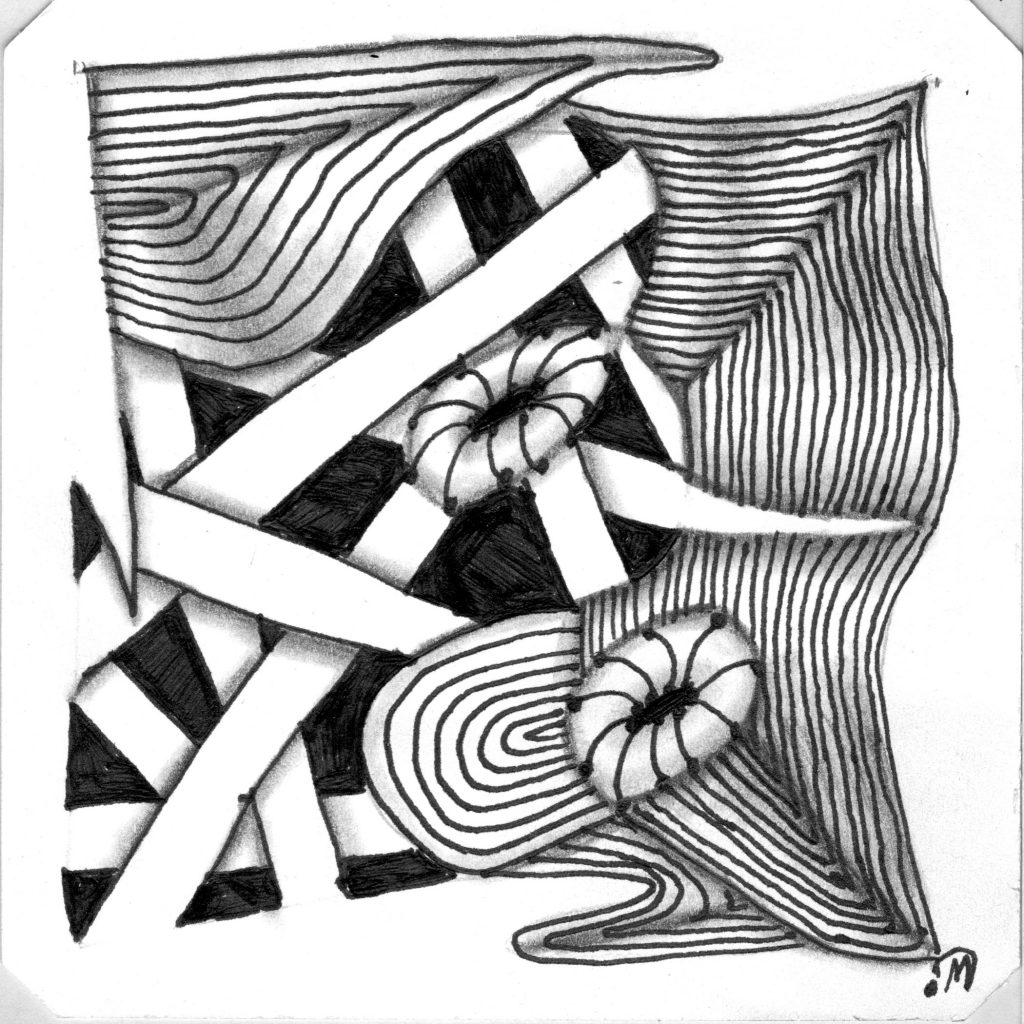 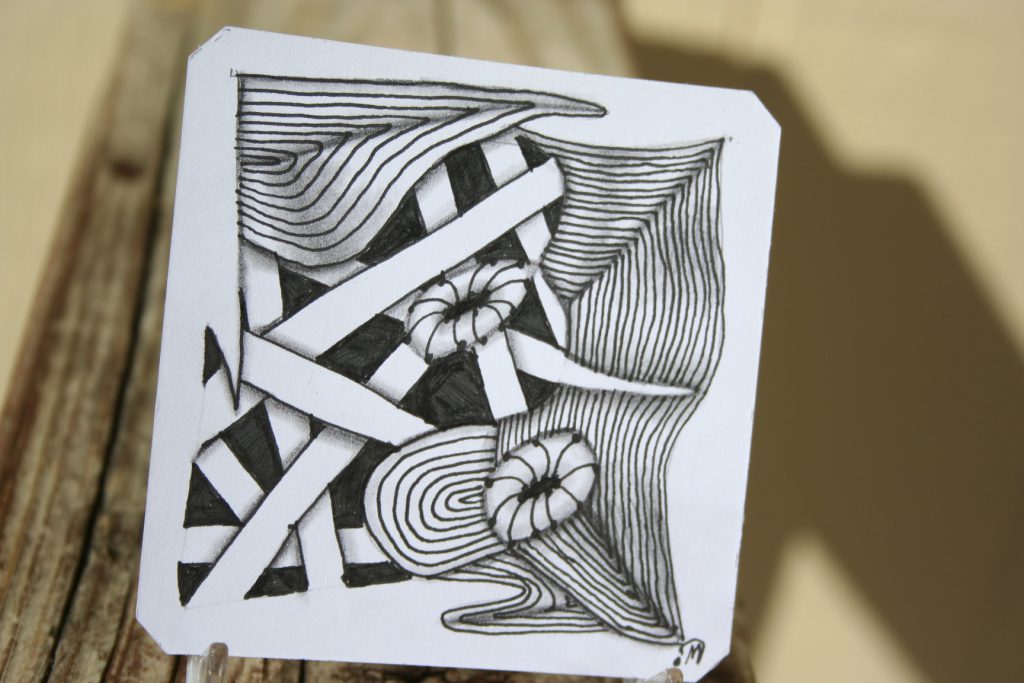 Officially this is week 4 of Zen-Untangled on the facebook group Tangle All Around but I’m just finishing up week 3.

Between this and Show Me Your Skills lettering class, I’m behind on one or the other each week. I guess I should show some of that here too. Well, maybe I’ll do that next week. It is the final week of the beginning lettering class. I have decided to continue on though, so between the two, I’ve got a daily activity for the next several months.

This week’s tangles are Flux (both Rick and Maria’s versions), Cubine, Frondous, Ynix, Ixorus, Hollibaugh, and Echoism. I already have ATC stepouts for both versions of Flux, Cubine, Ixorus, Echoism, and Hollibagh. Consequently I only had to make stepout ATC for Frondous and Ynix (I sure would like to know how to pronounce those . . . I pronounced Printemps like it looks until I heard Rick pronounce it on a project pack video.

Here are the fronts of my ATC for the two new-to-me tangles. 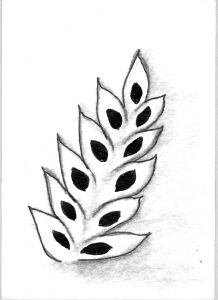 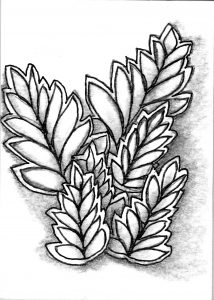 And this one is Ynix. (Please tell me how to pronounce it!)

This week’s string was a diagonal line from one corner to the opposite corner through a medium circle in the middle and once again, I forgot to scan it before I started.

I did “cheat” a little bid and used my helix to make the circle in the middle.

I decided that Ixorus would work great in the circle. I actually thought that Frondous, Ynix, and Flux would all be a bit larger but when I drew them, they came out on the small side. It worked out though because I was able to get all seven tangles plus the variation of Flux on this one tile. Echoism isn’t very visible though. I really like that tangle because it flows so well.

At any rate, here is the scanned tile before shading. 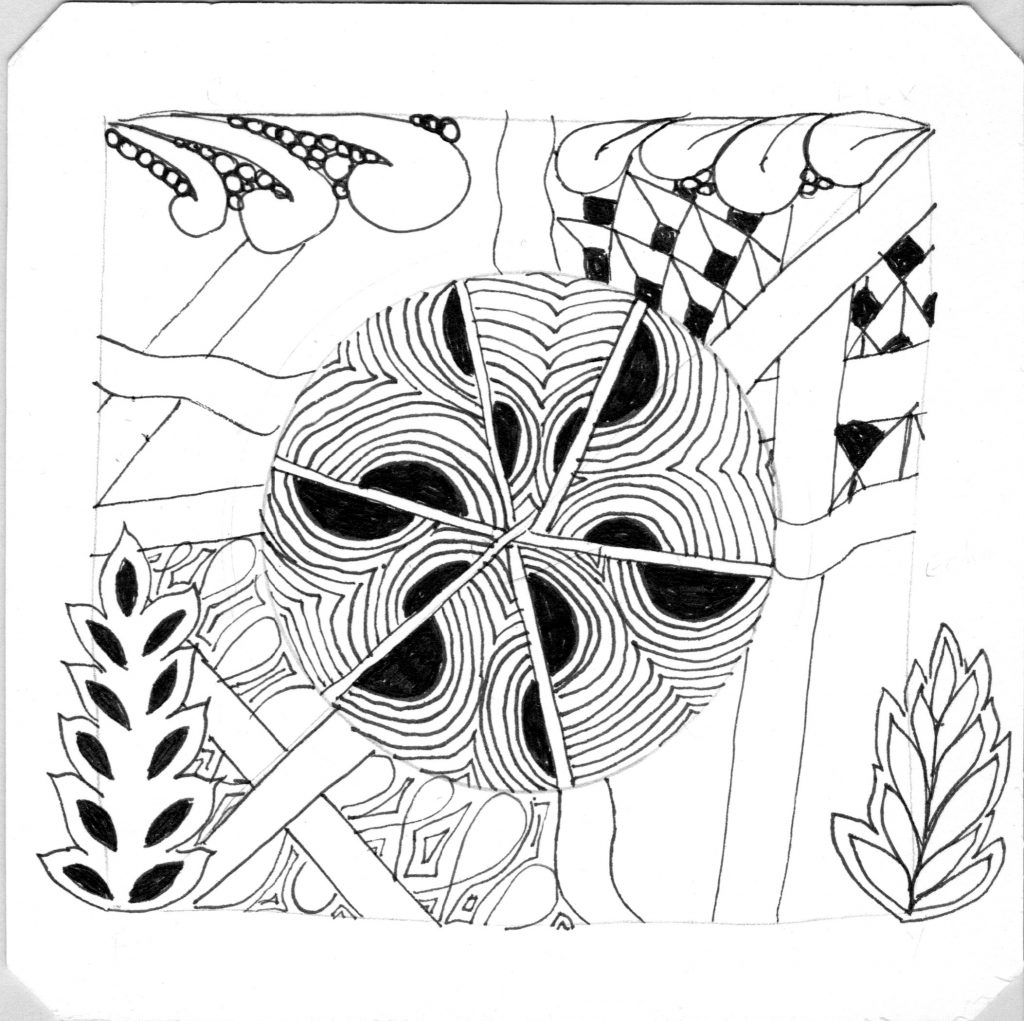 In hindsight, I probably should have started Ynix a little further inside the border instead of centered on the border. But, I think it balanced out okay. Here it is in natural light. 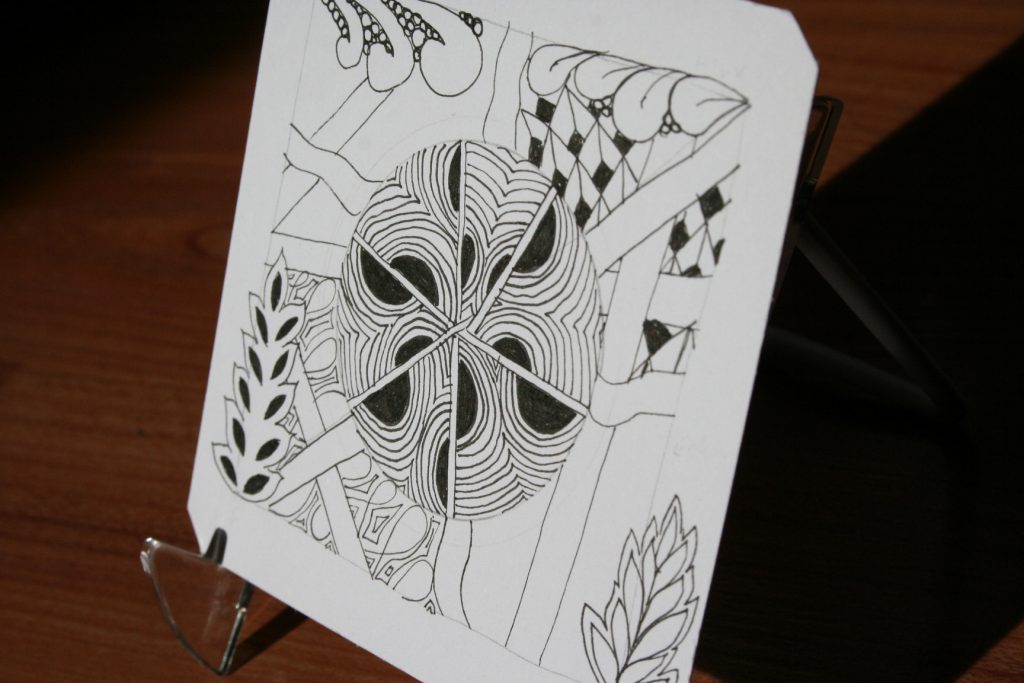 I started to do some curvy Hollibaugh (actually did two lines) and decided I wanted the rest to be straight lines.

Here is the finished tile scanned. 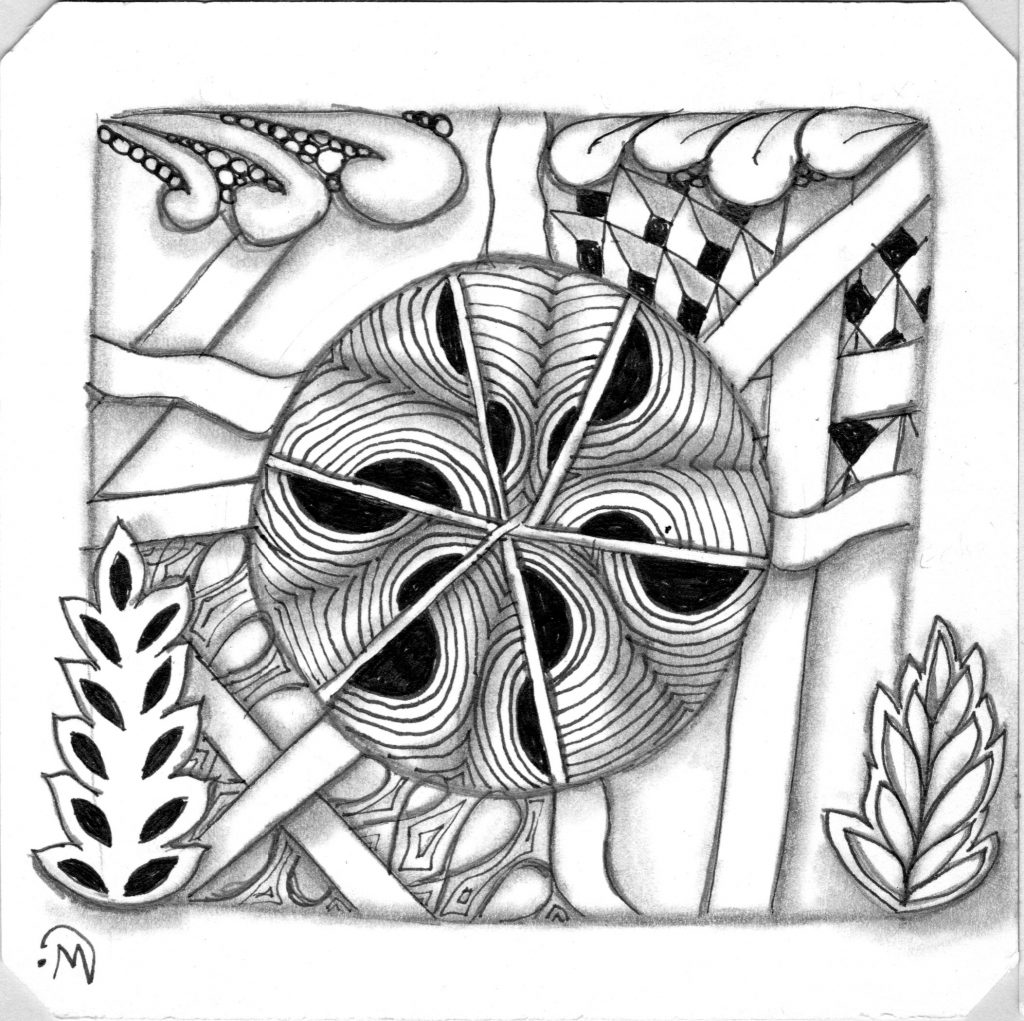 The natural light had set by the time I finished shading the tile, so I took it inside with the best lighting (and unfortunately a flash) I could get inside. 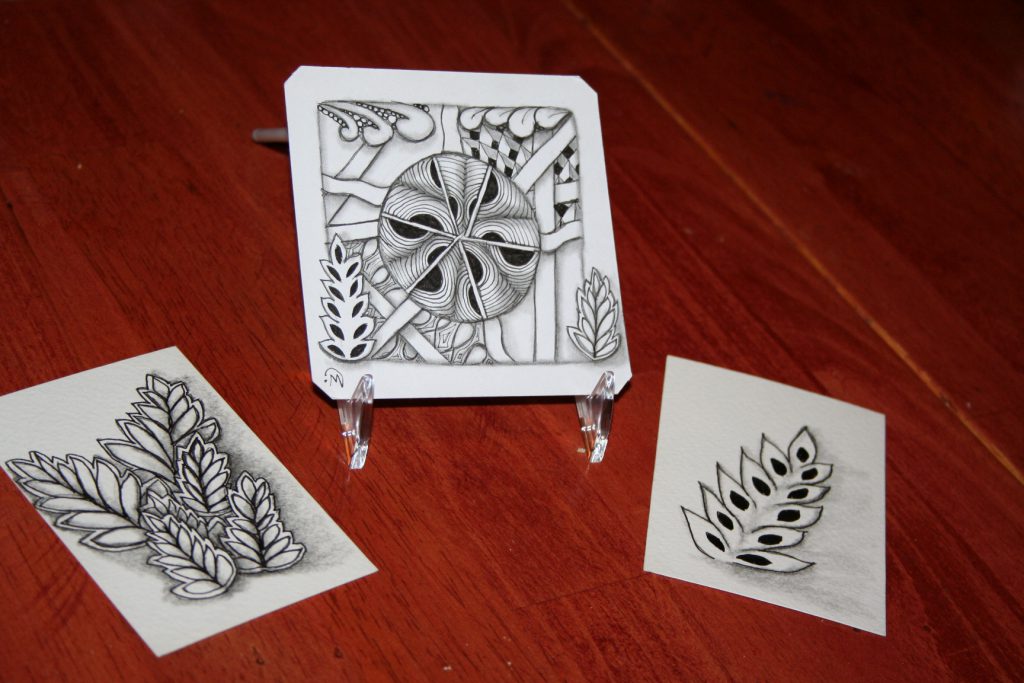 I’m still learning how to shade Frondous and Ynix. Have you seen these tangles before? How do you shade them?

Well, I’ll run for now. Thanks for stopping by.