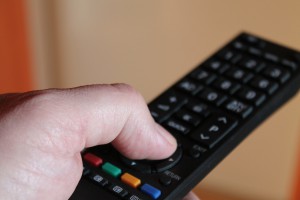 I have a simple thought today. Some times it is best to do something other than what you want to do, to show your hubby that you place him as a priority. Even if he doesn’t seem to see it or get it, it is good to make this kind of sacrifice from time to time.

Let me explain what I mean:

Mike likes to flick channels. He always has. This bothers me. It always has. It caused us a bit of trouble in the beginning of our marriage as we learned to cohabitate.

I learned to compensate for this frustrating behavior by doing other things as we watched television together. I crocheted, read books, did word puzzles, and eventually I played Nintendo.

Through the years I have added and subtracted activities from my list of things to do during the evening hours, while watching television with my hubby. Eventually it grew to me working on my computer but this became a frustration to Mike causing him to say things about only ever seeing the back of my head but I thought I was doing good because I was in the same room and aware of all that was going on.

Thankfully several years ago I got a laptop and thus Mike no longer saw the back of my head.

As you might have guessed though, this did not end his frustration with what I do while we watch television. Through the years, we have come to an agreement that during certain shows he will not flick channels but by this time I already had the habit of doing other things while watching television.

So, the point of all of this? The other day I purposefully stayed off my computer. I didn’t work on my blog, check my email or facebook, or play any of my games. I felt good about my choices even if it wasn’t noticed. I don’t know if he noticed or not but I do know I gave him more attention that I usually do.  It is important to give and take in a marriage, giving up without expectation of anything. Don’t expect him to notice or say anything about what you do or expecting him to do anything in return. Do what the Lord leads you to do and that is it.

What it boils down to is doing something for your beloved just because . . . that’s it. I think that is enough said.