These ribs are delicious, tender, relatively quick, and simple to make.

Glenda Goff of Around the Family Table blog talked about how much she loves her Ninja Foodi. Then she shared that the model she loves was on sale, direct from the company. I happened to have some money left over from my Christmas budget, so I was tempted to purchase it.

We had a Cruisinart Toaster Oven/Air Fryer and I was never pleased with how it air fried things. Things either didn’t get crispy enough or got burnt. I was not impressed with air frying. Then several months ago it died. We’d had it about a year and a half–not good.

So I’ve been wanting an air fryer. This Ninja Foodi is an air fryer but I have an 8 quart Instant Pot. Thus I didn’t think that I needed another pressure cooker, which the Foodi is also. BUT it is also a dehydrator and I’d love a dehydrator. I have a very old one but the lid is cracked and parts are broken and melted. (Hey, it was a great deal MANY years ago, at only $3 at a garage sale . . . awesome stocking stuffer from my sister and hubby.)

The foodi is a 6.5 quart machine, which is something I’ve been wanting too. As I mentioned, my IP is an 8 quart and I didn’t realize when I got it that things would take longer to cook in it than a 6 quart machine. I’ll keep my 8qt IP but I think this Foodi is going to be used a lot more.

So . . . I’d gotten a decent deal on the ribs and did a quick internet search to see how best to make them. Foodi to the stage!

So according to the recipe I found, the first step was to remove the membrane on the one side of the ribs. This proved to take longer expected. Also, my ribs were about 5 pounds and the recipe used about 3 pounds, if I remember correctly. 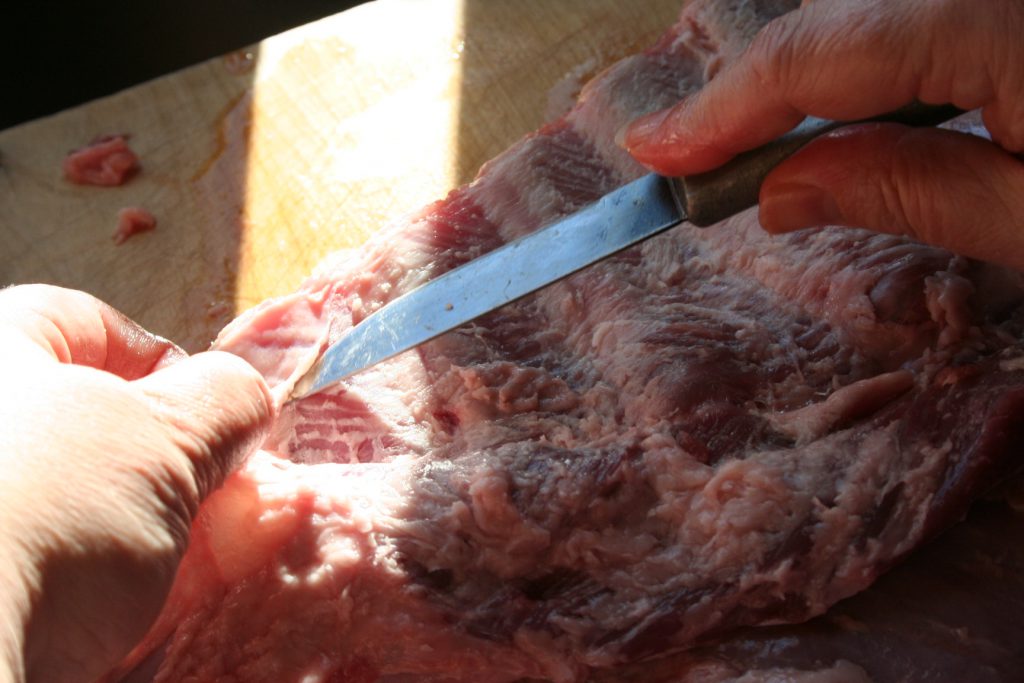 I’d gotten it off of all the meat on the right and was working on this part when I asked Tiffany to get some pictures for me.

She made up the rub for me to put on it. I decided to use a rub instead of a lot of barbecue sauce, which I didn’t have at the time. 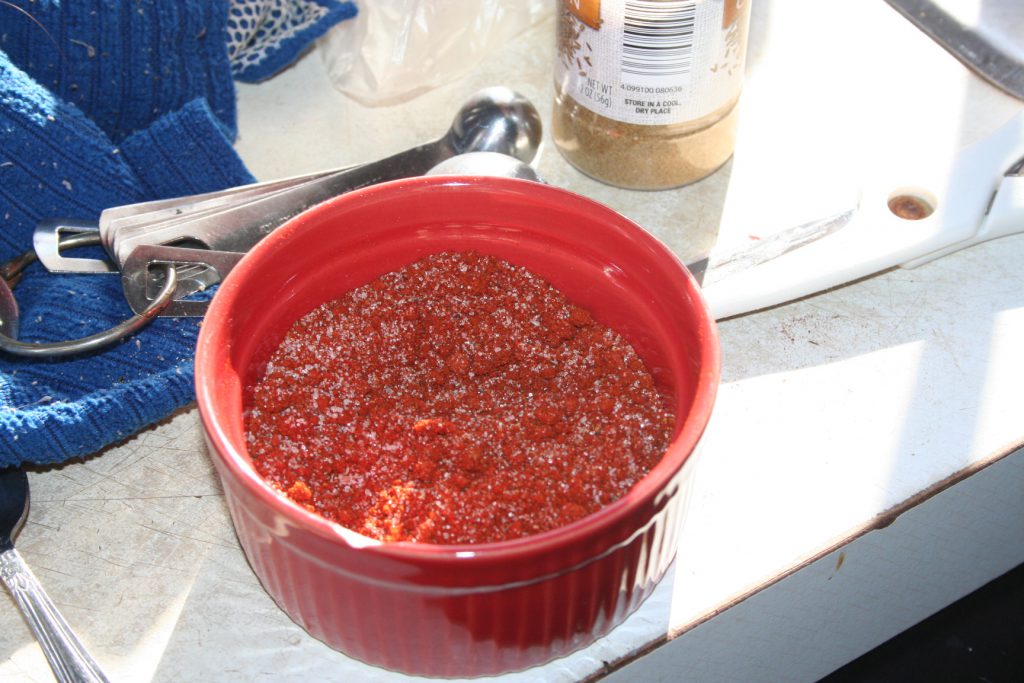 I used this recipe for the spice rub. I’ve used it before and liked it, so it was Tried and True. 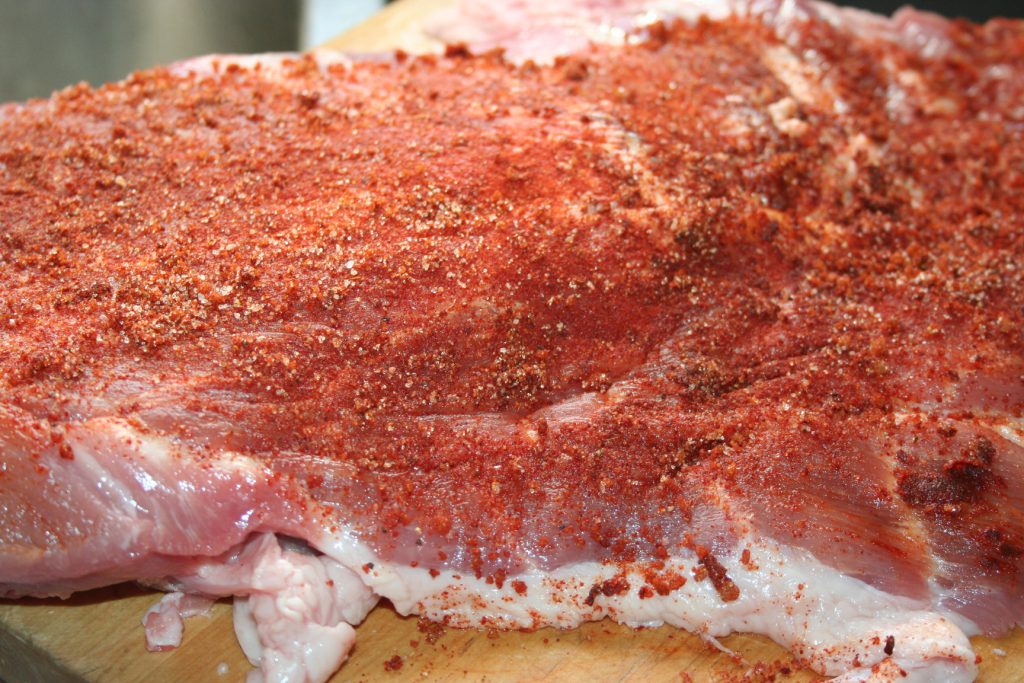 Once I got off the membrane and rubbed the spice mix on it I realized mine was bigger and it wasn’t going to stand in the foodi the way they did on the recipe I was following. I decided to just let it fall over on itself.

Now, I am not one for sour things and usually reduce vinegar when called for but I knew that without the barbecue sauce for liquid in the pressure cooker (Foodi), I would NEED the the whole amount of vinegar. I hoped I’d just make up for it later in the sauce I was going to create. So I added the 1/2 cup of ACV (apple cider vinegar).

The recipe called for pressure cooking it for 30 minutes for 3-4 pounds of ribs, so I set mine for 40 minutes. They were super tender.

While it was cooking I whipped up a barbecue sauce with some tomato sauce I had–it turned out pretty good. I’ll share it after I make it again, so I can get the measurements right. I just put a bit of this and a bit of that and a bit more of this and mixed them all together.

When they were done, I did as the recipe stated and poured out the juices from the pot and cleaned it out. Added the rack, placed some of the ribs on it with some bbq sauce and let the air crisper do its thing!

Here’s the recipe I followed: https://temeculablogs.com/ninja-foodi-ribs/ She has a ton of other Ninja Foodi recipes there. I’m looking forward to trying them out. 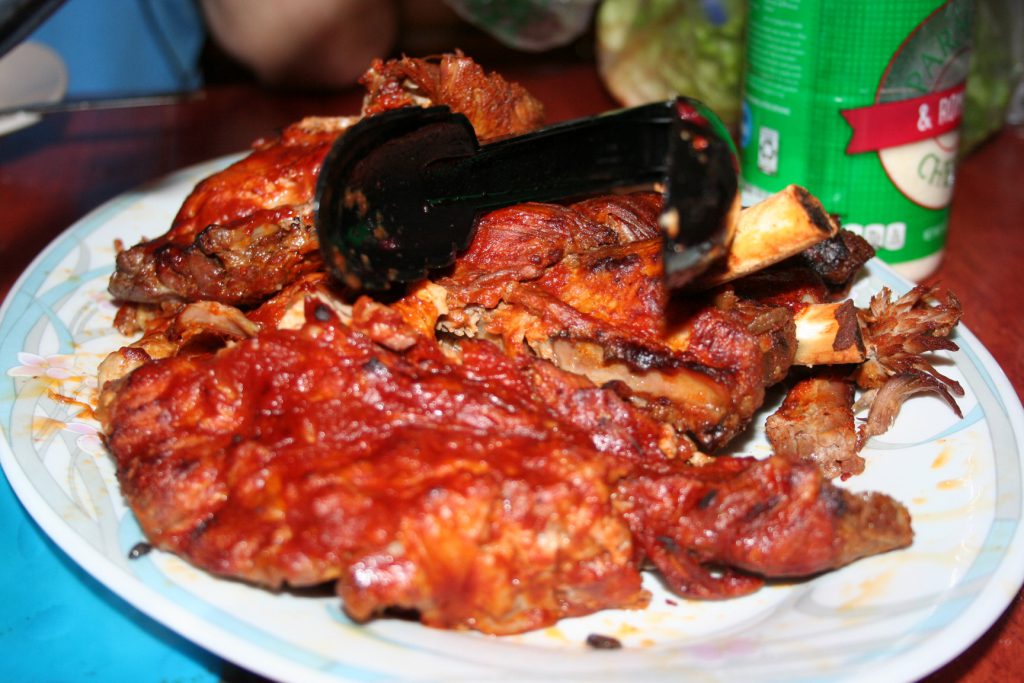 Tiffany and I had leftovers for lunch the next day and I had the little bit that was left on Tuesday. Yummo!

If you’ve thought about getting the Ninja Foodi, go ahead–I’m loving mine. It’s earned its place on the counter. I heated up my bit of ribs with the fryer function and added some seasoned cauliflower. Tasty in a fraction of the time it takes to make in the oven and quite a bit cooler too.