We had a wonderful Christmas holiday! I hope you did as well. I procrastinated getting my gifts wrapped again this year! Every year I say I’m going to do differently next year and I end up doing the same thing over and over again. So, in an effort not to procrastinate next year, I wrote a note on two different dates in my 5-year journal. On December 7th, I wrote, “Start wrapping gifts!” and then on the 18th, “Finish wrapping ALL gifts today!” I sincerely hope I listen to myself next year.

Brian and Lauren volunteered at their church before coming out for the night. I still had a few gifts to wrap by the time they and sweet Liam arrived. Of course, I took a few minutes to snuggle and love on my sweet grandson and then back to those last few packages. 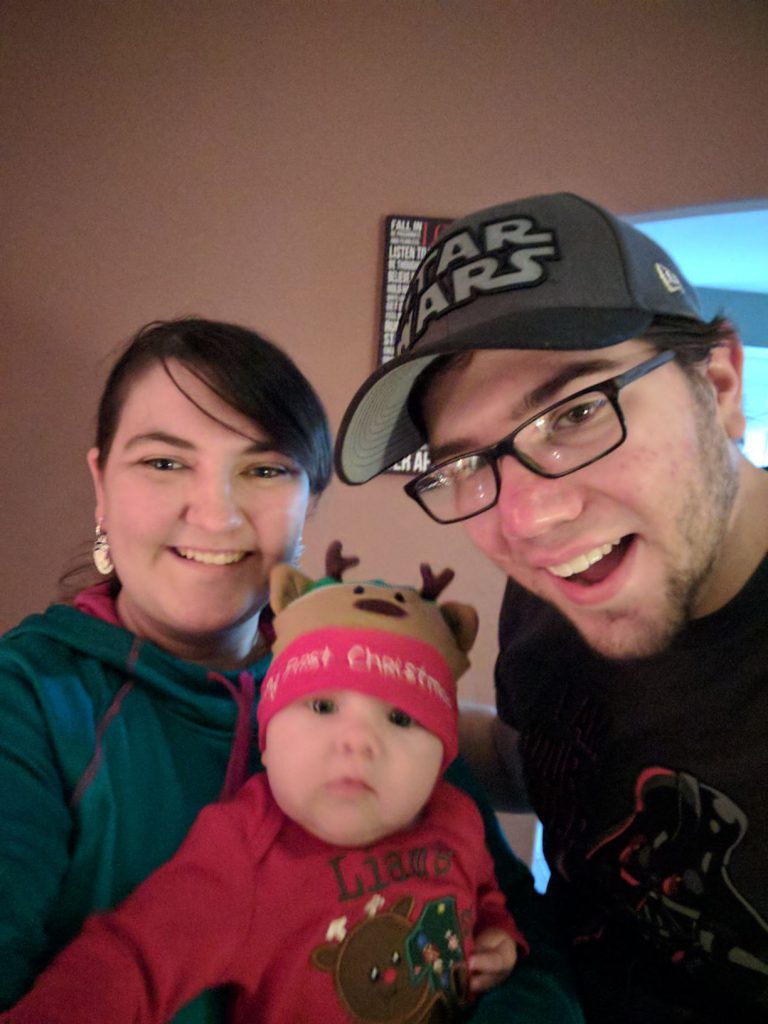 Sean and Michael had run into town to pick up Sean’s last gifts for Tiffany. Tiffany began making Sausage Sandwich and Lauren helped her make the queso. We played some Tenzi after dinner. 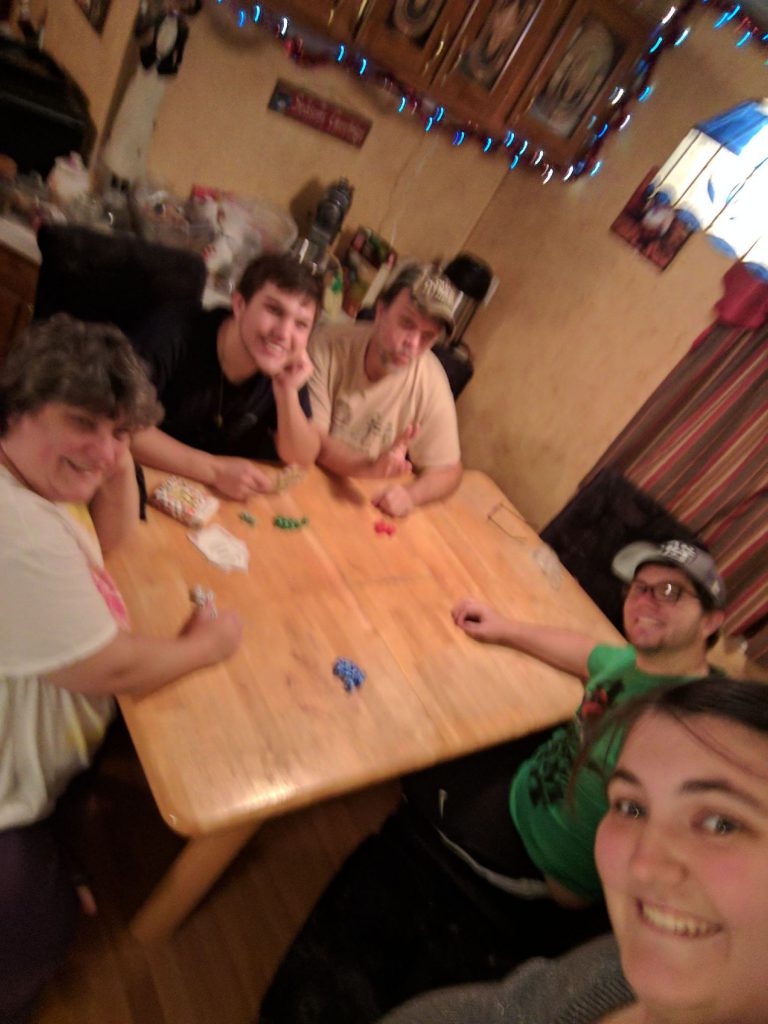 (Sorry, it’s a bit blurry but the best one I have.)

And then she had some quality time with Liam. 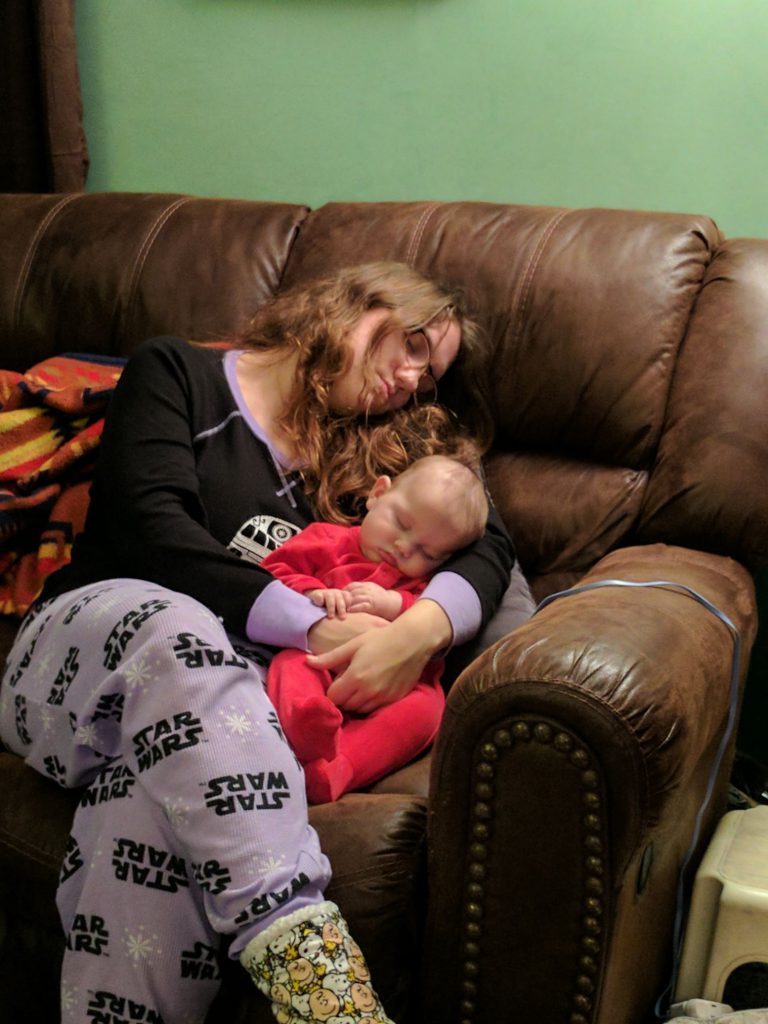 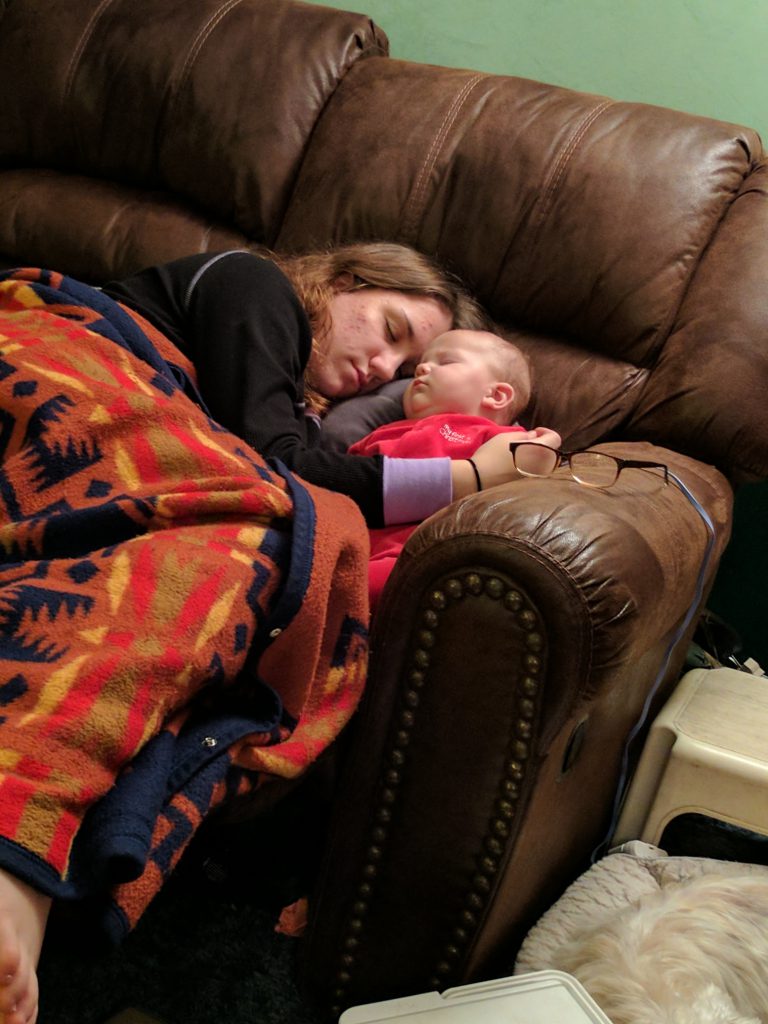 Shortly after that picture was taken, Liam awoke and Tiff went to bed.

We open gifts on Christmas Eve morning. (I wrote all about that here.) For the last several years, the boys have helped me make breakfast before we open gifts. They make the Bubble Bread and I put together the Breakfast Burrito Bake.

Evidently Brian and Lauren had to wake up sweet Liam. He was not thrilled but eventually warmed up.

We prayed together, opened stocking stuffers, opened gifts, and then ate breakfast. Afterwards, we packed up and went to visit my sister and her family.

The guys went and brought home food from Long John Silvers, we had a nice visit, and then the four of us came back home. Sean recently purchased The Hobbit and The Lord of the Rings extended edition videos. We agreed to start a marathon of watching these on Christmas Eve night.

Tiffany made the apple crumble pie for me while I was still wrapping gifts the day before but I still had the pumpkin pie and apple cake to make. When we got home from Tracie’s I took some time to just chill as we watched a movie – we’d borrowed one from Tracie that we hadn’t seen yet. I planned to do my baking afterwards. (By my choice of words, I’m guessing that you’ve figured out that all did not go as planned.

The movie finished and I’m not sure what I was doing as the kids put in the first Hobbit movie. I may have been reading the new art ebook I got from Michael that I really wanted or I could have been playing a Christmas game on my laptop but the end result was that I forgot all about doing any baking at all until it was time for bed!

Sean stayed up and helped me. Thankfully pumpkin pie is uber easy. We were out of apples, as I had miscalculated how many I needed, so I could not make the apple cake. Instead I took some of the leftover Breakfast Burrito Bake for Lauren to eat the next morning. Mom has made some breakfast casseroles for the last several years, so the cake really isn’t needed.

Liam looked adorable on Christmas Day. Mom held him as she read the children’s pop-up book. 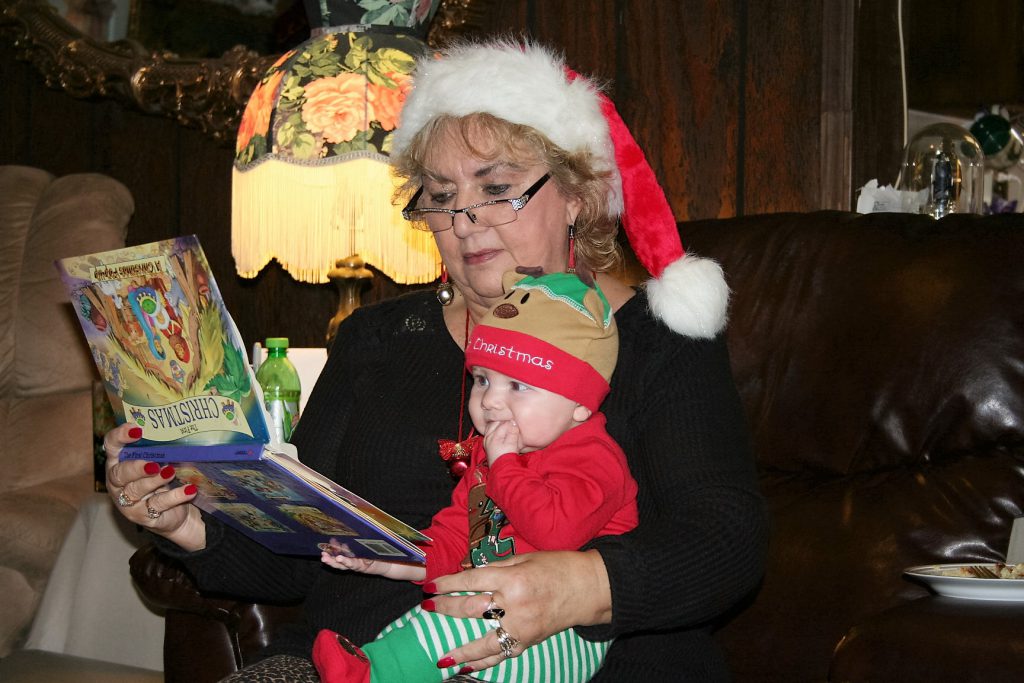 Lauren reads to him a lot, so he already has a love of books! I’m so happy about that!

It was a very warm day for Christmas.

I do not like it to be so warm. I even wore flipflops! Ugh! 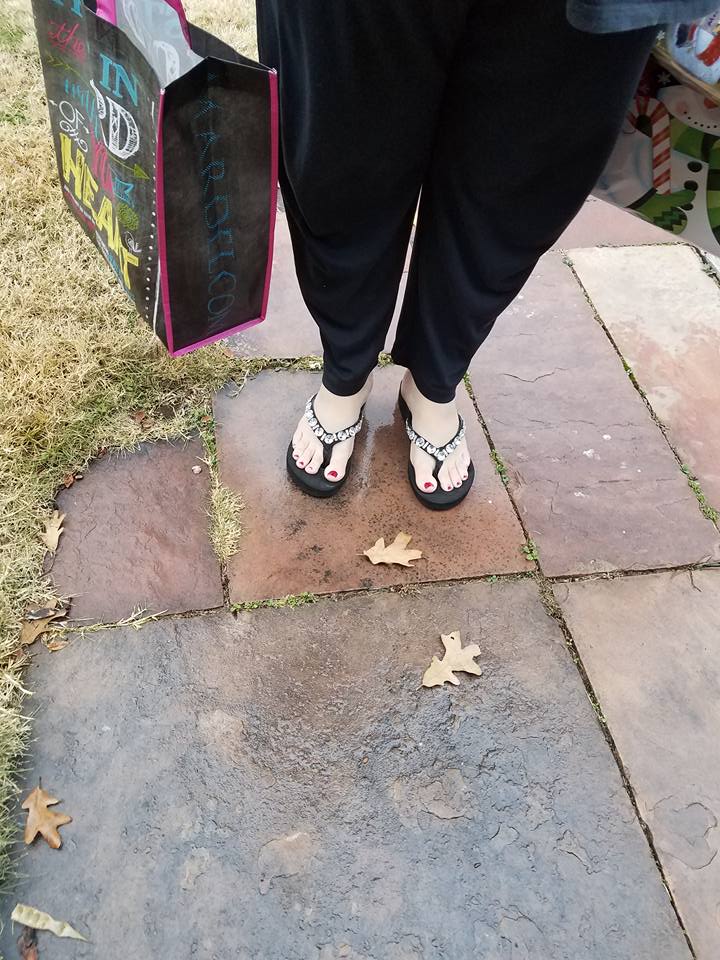 It got so warm that Tracie had to pull up the pant legs on her comfy pants! 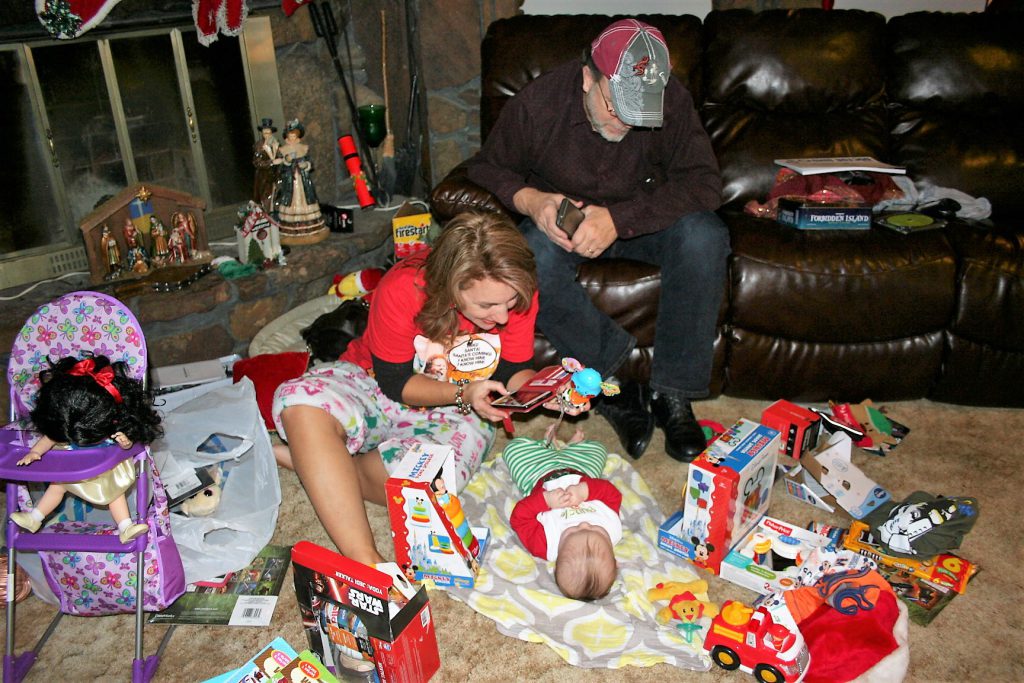 As you can tell, Liam does not lack for attention or love. 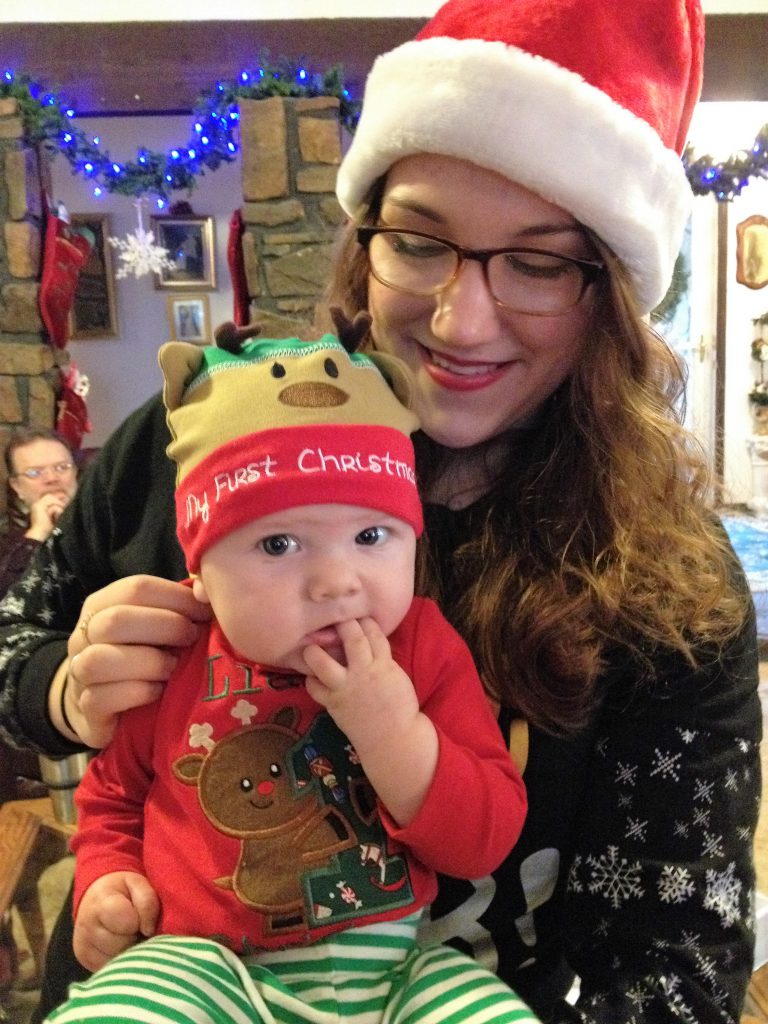 After presents, we had a little time before we needed to get the pizza going. The guys went outside and did some target practice with the pellet rifle while we gals played some Tenzi. 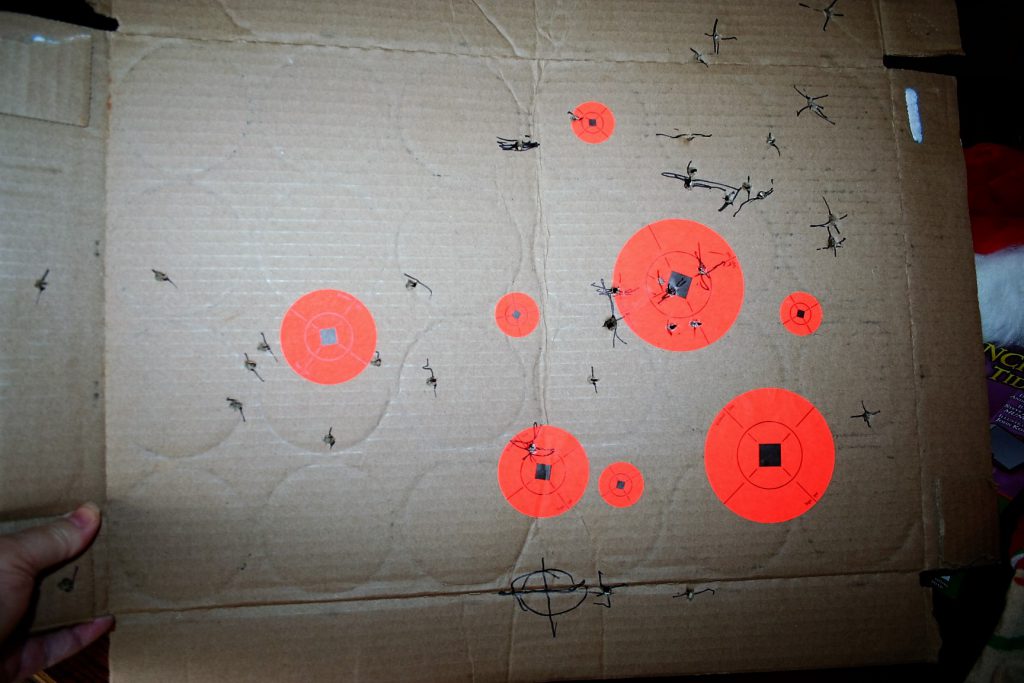 Then some of us gals decided to give it a shot too. 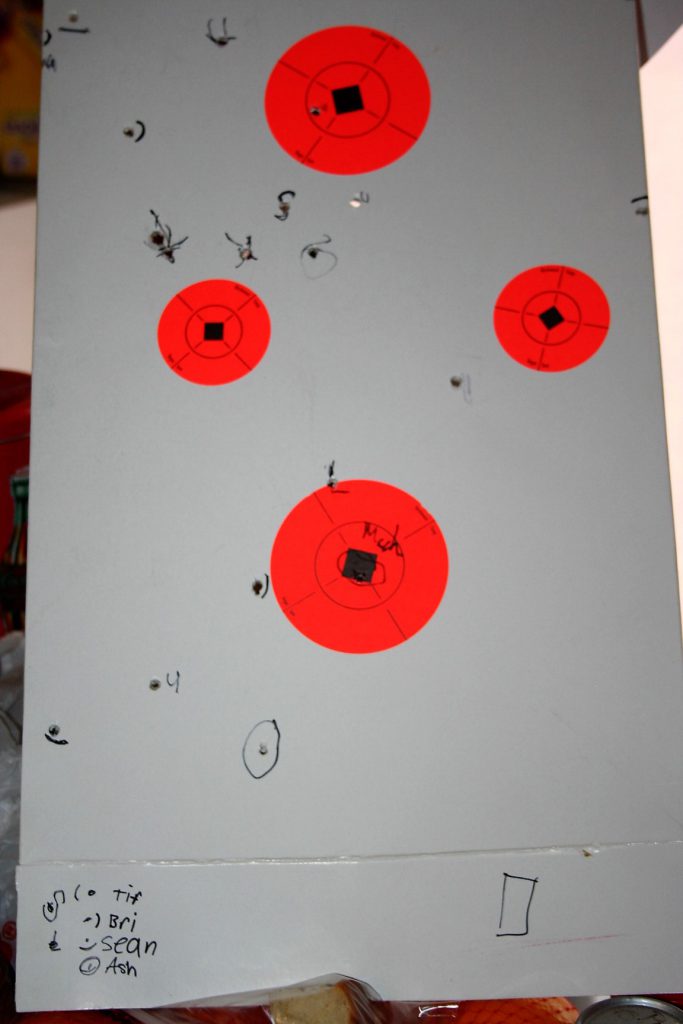 I tried it once or twice. The first time, I figured I didn’t even hit the cardboard. My brother-in-law Mike said that the reason he couldn’t find it was because I hit the bull’s eye! 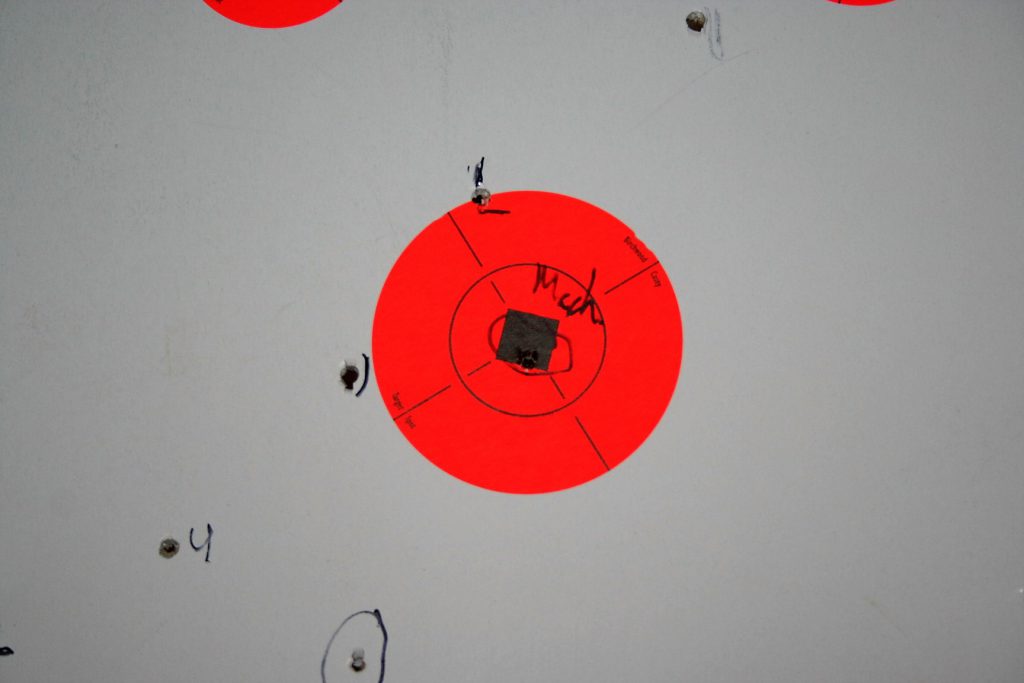 LOL! It was a lot of fun! BTW, my parents live out in the country on five acres of land.

Mom made some delicious pizza, assisted by my sisters and I. I really love the pizza tradition. And as an added benefit, there’s very little to clean up afterwards! Win-Win!

This post has gotten rather lengthy, so I think I’ll quit for now. I hope you have a fun evening planned tomorrow to ring in the new year. We’ll be at my parents’ playing games together. I hope I get some good pictures to share next week.