I like games. I didn’t usually have anyone to play board games with me and then there came the lovely event of the video game! I could enjoy playing games without having to pester someone else to play with me. It was wonderful!

To this day, I enjoy playing video games. There are some games that I don’t even understand why I like them. Animal Crossing is one such game. When it first came out we rented it from Blockbuster. (See how long ago that was!) I was surprised how much I enjoyed that silly little game that basically had you going and doing errands, building a house, paying off your mortgage, planting flowers and trees, and maintaining the yards. Seriously, silly little game. Two of the three of my grown kids still love it today.

Then that silly game came out with another silly game: Animal Crossing Amiibo Festival. This silly little game has a ‘gameboard’ but is not like Mario Party where there are a lot of mini-games, this is just a board game. I don’t know why but Sean, Tiffany, and I enjoy playing this too.

I play most of the casual games by Microsoft: Solitaire, Sudoku, Minesweeper, Jigsaw, MahJong, and Taptiles, along with Wordament and Snap Attack (the latter less frequently). For these games, I have a reason. Each one helps me keep my brain and/or reflexes engaged, which is important as one ages. 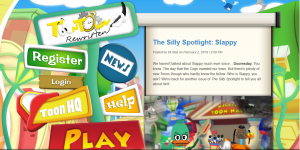 Well, this week we found out that an old favorite game is available to play once again. This is another of those games that I just don’t know why I like it. It really is kind of a kid’s game but nevertheless I still really enjoy it. Wonder what it is?  Toontown! Yep! I knew some time ago that there was an effort to bring back the beloved game and Sean checked the other day and Whoo Hooo!!! It’s up and running!!! Now it is called Toontown Rewritten; although I don’t know why. I think it would have been better called Toontown Rebooted because it is the same game.

For those that are unfamiliar with the game, it is a turn based game. Now, generally I don’t like that kind of game but I love it for this game!!! You get to customize your own character. I am a tall purple dog named Lady Lily Loopendoodle.

In the game you can meet up with friends and play together. too 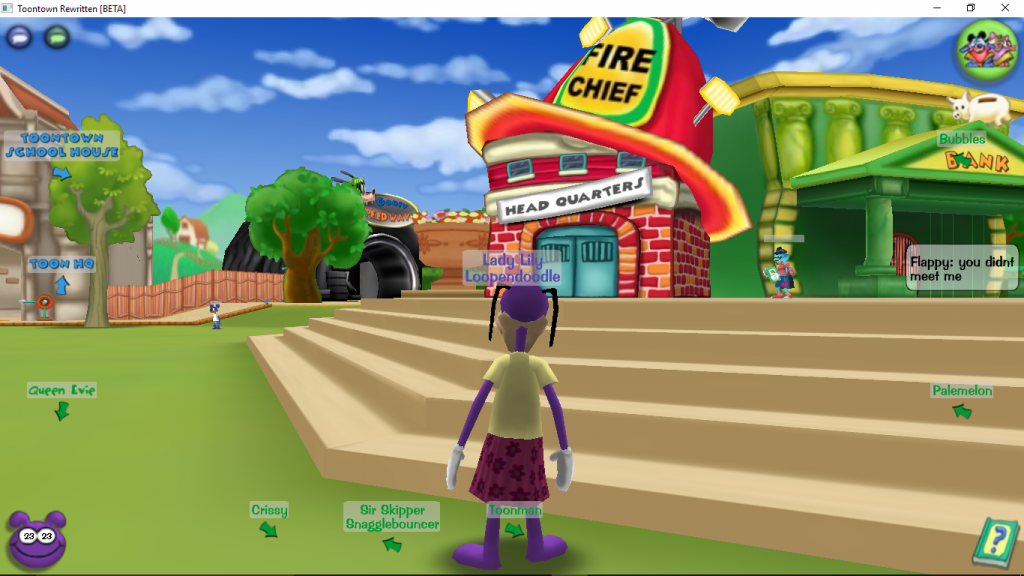 The premise is that robots called Cogs have invaded Toontown and you help save it by playing gags on the cogs. You can work alone or with other toon players. You get better and better gags to use and have a laugh meter for your health meter. It is really a fun game. Check it out!

Oh! There is little educational value . . . wait! If I work at it a bit I’m sure I can come up with something . . . strategy, teamwork, follow directions, turns, ‘money’ management, and staying on the sidewalk (to avoid oncoming cogs).

There I did it! Now it is even a better idea for your kids to play.

Well, I’m off to finish my task so that I can get another frame of my filmstrip to learn a new gag — sound gags, here I come!

Have a great weekend! Until next time, God bless,