My hubby’s birthday is today, so this will be short and sweet. 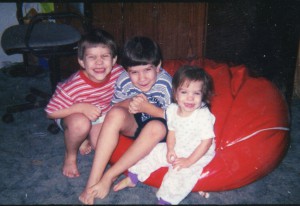 I remember reading an article some time ago about how the French parent different than Americans. It was very interesting and made me think about how I raised my kids. Remarkably, there is much that she mentioned in the article that I remembered doing with my kids but I did see some things I could have done differently.

The article is kind of a teaser for her book but lucky for us, it came out two and a half YEARS ago.

The title of the article is Why French Parents are Superior and was written by Pamela Druckerman but the title of her book on the same subject is Bringing Up Bébé: One American Mother Discovers the Wisdom of French Parenting which is available on Amazon and other book sellers.

One of my ‘take-aways’ from the article is that the French refer to child rearing as “educating” instead of “disciplining”. They teach children to be polite and respectful. One of the ways they do this is by having them address familiar adults when they enter or depart.  Another is not allowing the children to interrupt when adults are speaking but yet addressing the child by telling them to wait a couple of minutes.

Another thing that stuck with me is how they say no with authority and an accompanying look that lets the child know you mean it. Another interesting thing is how she said they eat in ‘courses’ and start with vegetables, even the young children, and don’t eat but predetermined times, three meals and an afternoon snack.

One thing that I have seen so many American parents do is tell their child to do something and then count to three before enforcing it. This teaches children that you don’t really mean for them to obey you until you get to three. I caught myself doing this early on and rectified it. I wanted my children to know that I say what I mean. I also was careful to think about what I was going to say before I said it, to ensure that I was ready to back-up/enforce what I was saying. Thus sometimes I took a little bit of time to answer my children’s questions. I needed my children to believe the things I said . . . consequently I did not tell my children there was a Santa Claus or Easter Bunny or other such characters because I wanted them to believe me when I told them there was a God and that Jesus is our savior. I did tell them about Saint Nick and they did watch Santa Claus cartoons in the same manner that they watched Toy Story or Megaman shows.

I thought this article was interesting and I just found out that my library system has it available, so I’ve requested it. I look forward to seeing what else she has gleaned and what I might have done differently.