Two years ago we ordered some fruit trees. We went cheaper and got the younger trees, at least we thought we did. The pear tree had a much larger root than all of the others. We think we must have order that one a year older than the others.

It’s looking good but still no blossoms. Unfortunately, all the other trees we got that year did not survive. There was a year warranty but they said with younger trees it was normal for them not to leaf that year, so we didn’t realize they hadn’t made it right away. At least one of the trees met its demise from Mike and his lawn mowing; he said he may have run over it.

Last year we saw some fruit trees at Sprouts, a local ‘farmers market’, as they call themselves. I call it a natural foods store. ANYWAY . . . they had a plum tree that Tiffany believed was a good one; she’d done all the research on the fruit trees the year before so I relied heavily on her for choosing the trees. We have lots of cedar trees and we needed to be sure we were getting ones that would not get diseased from them (cedar rust or apple scab). So, we bought one of the plum trees, brought it home and planted it near the plum tree we’d planted they year before, hoping that both would live.

This year the plum tree from Sprouts blossomed! I wish I’d have gotten a picture but alas, I did not. But I did get a picture yesterday of a little plum beginning to grow. See? There are actually several on these few branches. (It is still helped by the stick that it was tied to when we bought it.) 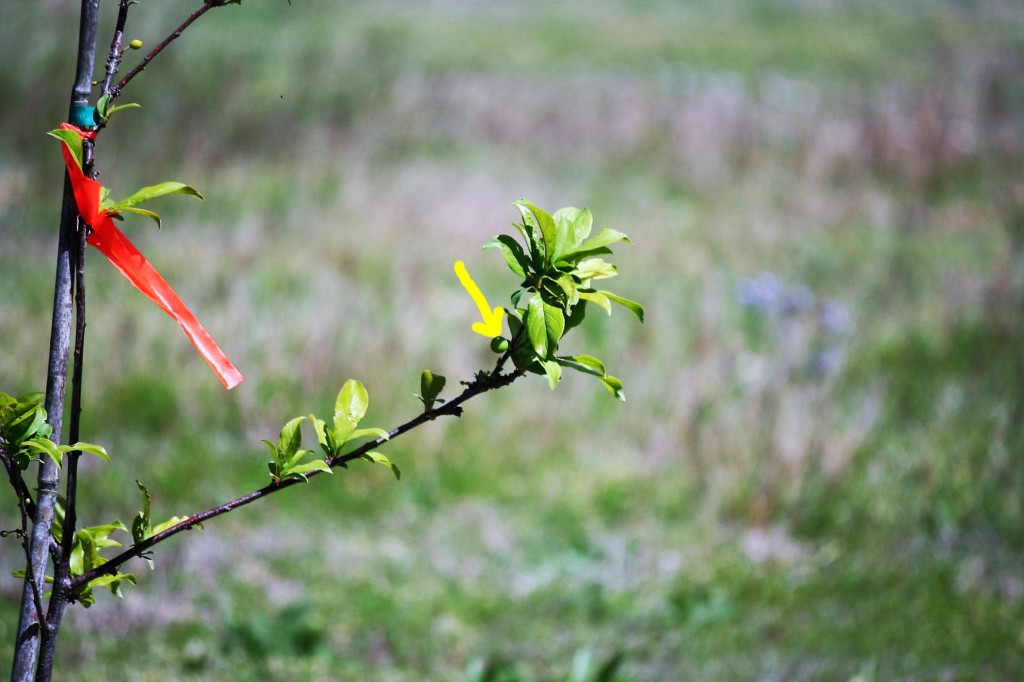 It was VERY hard to get that picture because the camera kept focusing on the neighbor’s chicken coop and everything, including the grass, except my precious little fruit.

So, this year we decided to try again and re-order the fruit trees. We wanted an Arkansas Black Apple tree because it is supposed to have SWEET apples. It supposedly needs three other trees with it for proper pollination; so we got it, two red delicious trees and intend to get a Pricilla apple tree as well, which is supposed to taste similar to a Pink Lady apple, as soon as there are any available.

We also purchased another plum tree and a nectarine tree. I prefer nectarines over peaches because of the fuzz on the outside of a peach. Sean and Tiffany do not agree with this but were vetoed. We ordered all of these a little older than what we had ordered before.

When they arrived, most already had leaves on them or at least leaf buds ready to emerge. We are pleased with these and glad we paid the extra bit for them being older.

When we planted them we made sure to put a good bit of mulch around each one so that Mike will not bump into these with his mower. We tried to keep them all in the same vicinity so as to cause as little interruption in his mowing method as possible.

When we went to Wal-Mart to get our mulch and extra soil, I saw they had some fruit trees. Only these fruit trees had blossoms on them already. We looked and one of them was an Arkansas Black! I couldn’t help myself . . . we bought it! (Allowance money put to good use.) 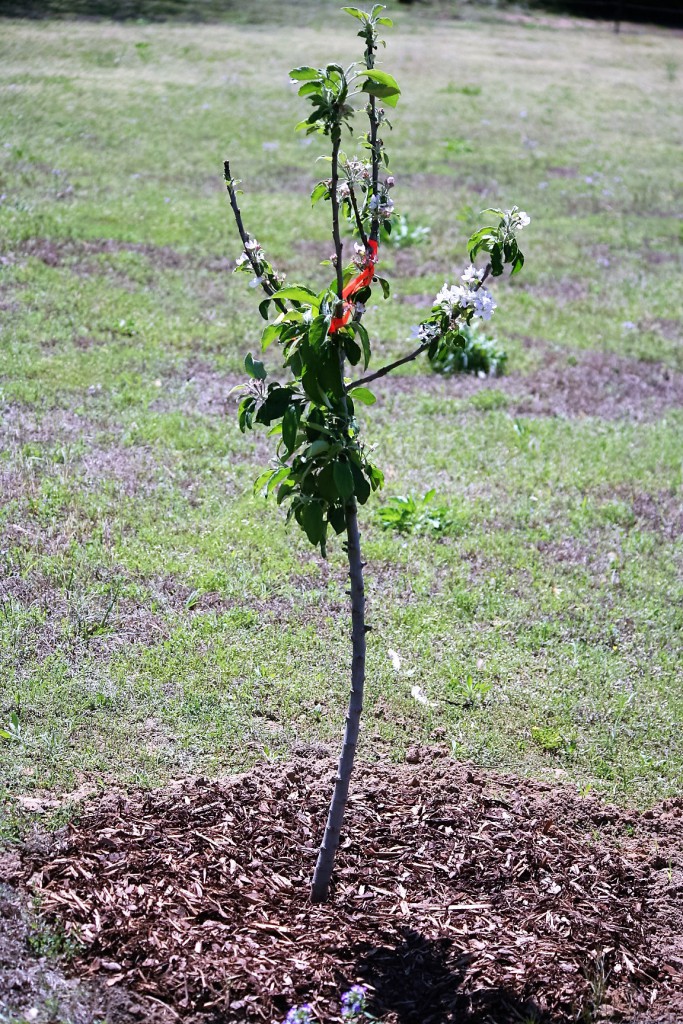 Here are some of its blossoms! 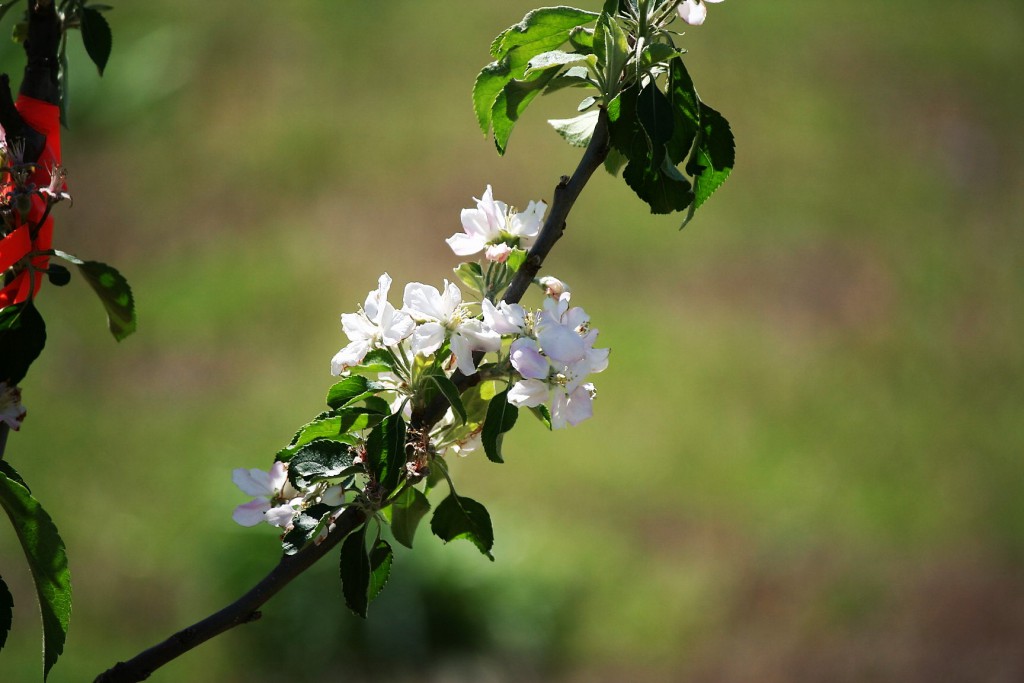 As if that weren’t enough, I was drawn to a peach tree. This particular one is supposed to produce LOTS of VERY SWEET peaches. We shall see because I bought it too.

The nectarine tree arrived with blossoms also!!! Nectarines this year! Woo hoo! I didn’t get any pictures of it because the blossoms are all gone and my camera does not want to take closeups of the fruit on the branches; it keeps trying to help me out and focus on the background. Ugh!!! I even have it set on plant. I guess I should have followed through on the New Year’s resolution to learn about my camera LAST YEAR.

I think this one is more of the apple tree. I was trying to find the fruit near the spent blossoms but don’t think I managed it. But it could be either the peach or the nectarine . . . I forget and it wasn’t that long ago that I took the pictures. Ugh! 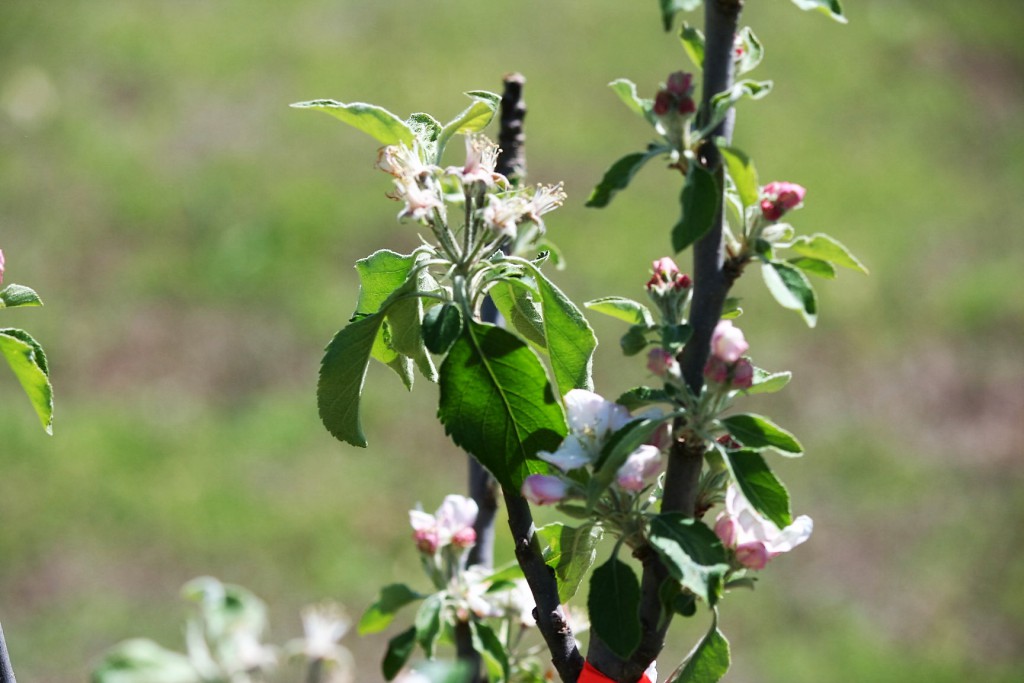 Well, I’ve rambled long enough for today. I need to run. I’ll tell you about the other things we got and show you some of the pretty wild flowers we have in our yard next time.