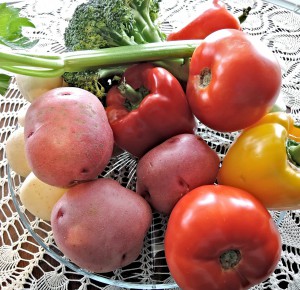 It is hard to believe this week has already come to an end and that January is coming to a close as well. I wish I had been a bit more productive in it. I guess there is always next month.

I’ve been preoccupied with vegetable dishes lately. Although yesterday we enjoyed Sticky Garlic Noodles. Very simple ingredients but too much brown sugar, which made it a little bit  too sweet but still delicious! Of course the sugar was not Daniel’s Fast compliant but it was only a little bit.

We had roasted root vegetables this week which were very good. Red potatoes, carrots, turnip, rutabaga, onion, garlic, and a couple of mushrooms. Mike declared these a keeper. Tiff and I both really enjoyed them too.

Another day we had roasted broccoli, cauliflower, brussels sprouts, onion and garlic. This too was very good although the broccoli and cauliflower doesn’t sit well with Mike – he gets heartburn soon after eating them.

We have decided that wild brown rice is delicious, another item we will continue to incorporate in our menus. We had it for dinner twice this last week and Tiffany and I had some of the leftovers with lunch a couple of days too.

Last week Tiff and I picked up some spinach wraps and some sun-dried tomato wraps. We have had these for lunch filled with spinach, alfalfa sprouts, and various other veggies. Delicious! I put so many veggies in Mike’s that I had a hard time rolling it up. I’m sure it was a bit messy for him to eat.

I had some recipes I wanted to try this week but didn’t get around to it. I was going to make a red pepper pasta that looks very creamy and yummy, but it takes over an hour to make. Yesterday when I was getting ready to make it, Tiffany and I both decided we were too hungry to wait over an hour to eat, so we settled on the sticky garlic noodles instead.

Some other things I had seen and wanted to fix  were corn fritters, spaghetti squash with marinara, and some kind of veggie burger. The good thing is that these now go onto next week’s menu.

Oh! Another recipe I want to try is Butternut Squash Macaroni and Cheese. It too looks very creamy but I have my doubts as to its claim of being macaroni and cheese though. I do intend to try it this coming week though.

One reason I didn’t have it yet is because we’ve had pasta several times this week. Actually, we had whole wheat angel hair pasta once and brown rice pasta two or three times.

We did have mushrooms nearly every day over the last week though and I think it caused Tiffany and I to have some stuffiness. So yesterday we did a test and chose not eat any mushrooms all day. By bedtime Tiffany announced that she had no nasal pressure nor stuffiness. So I guess that we need to limit our consumption of them from here on out.

I’ll share some of these recipes on Tuesdays before long.