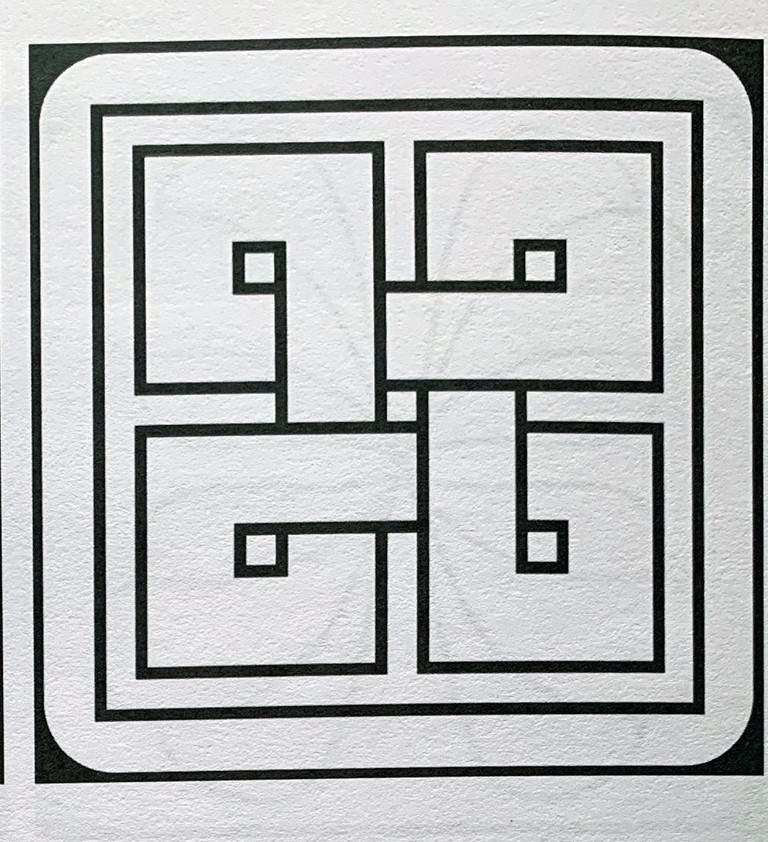 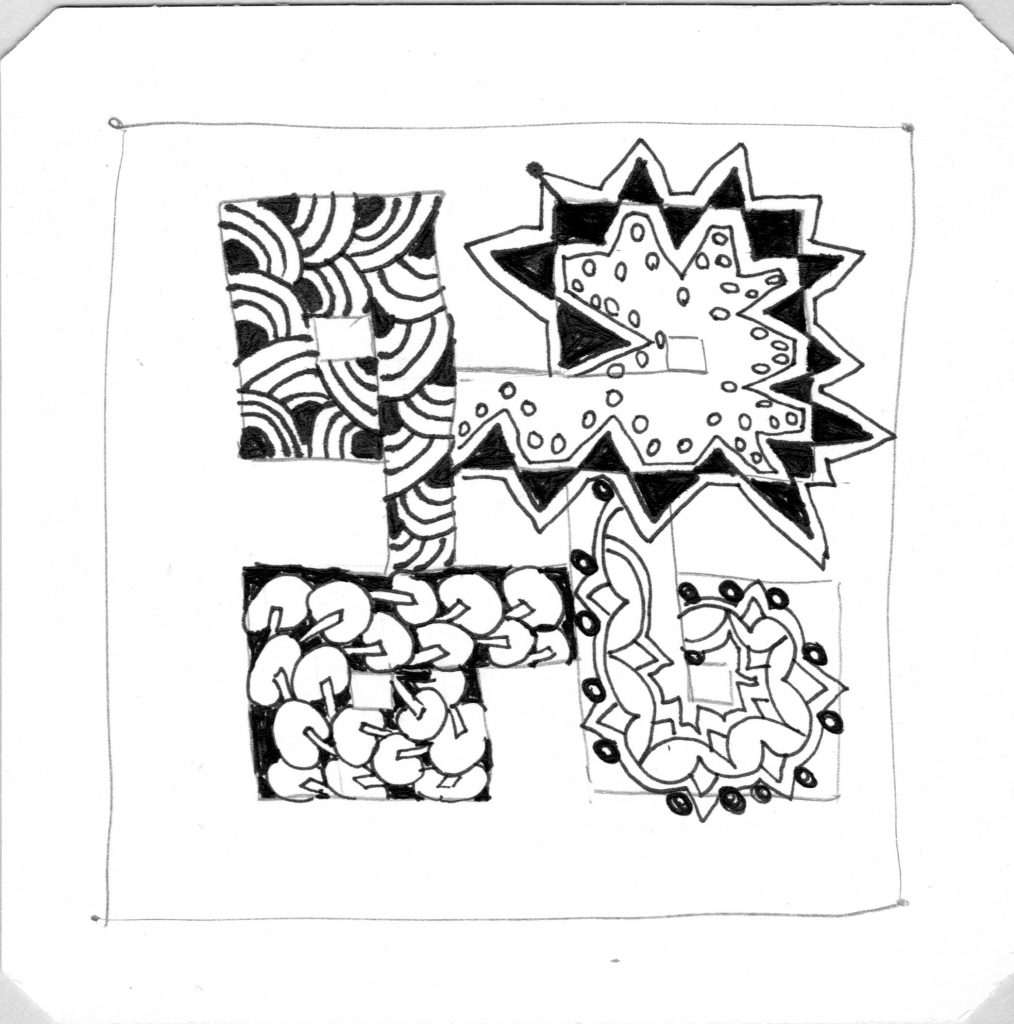 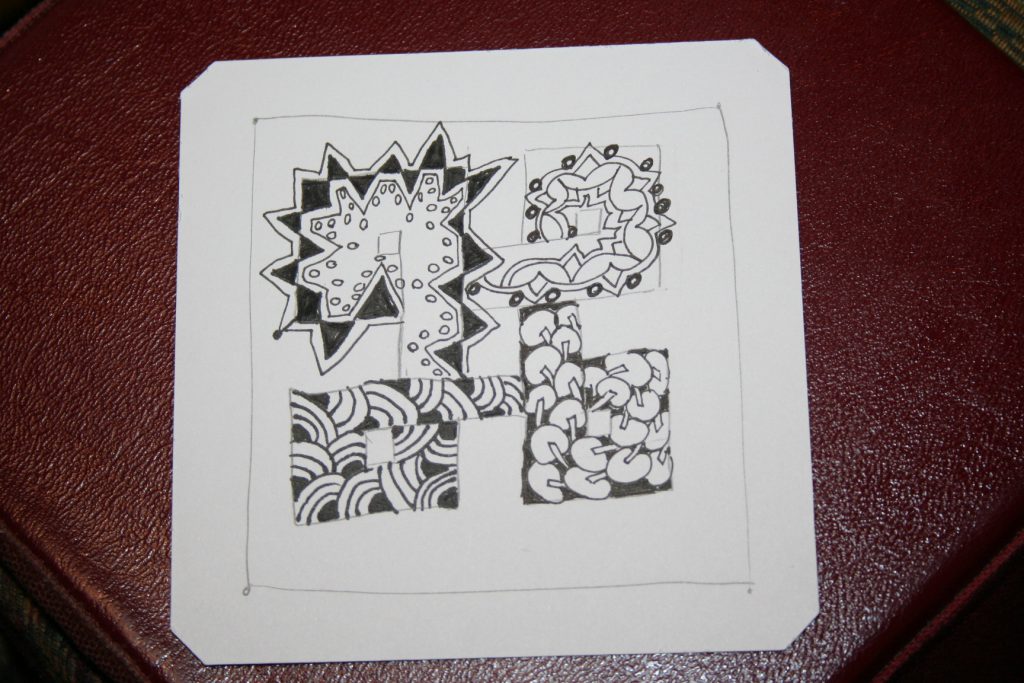 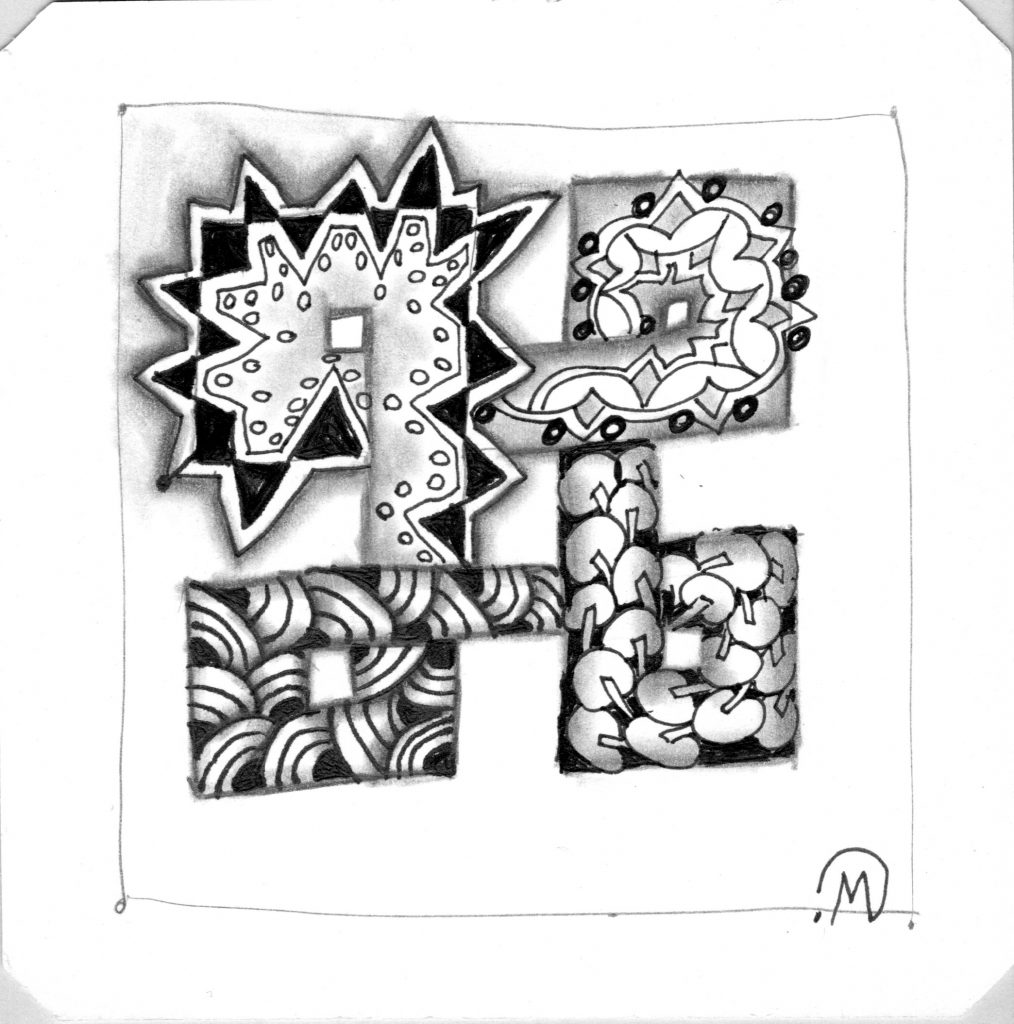 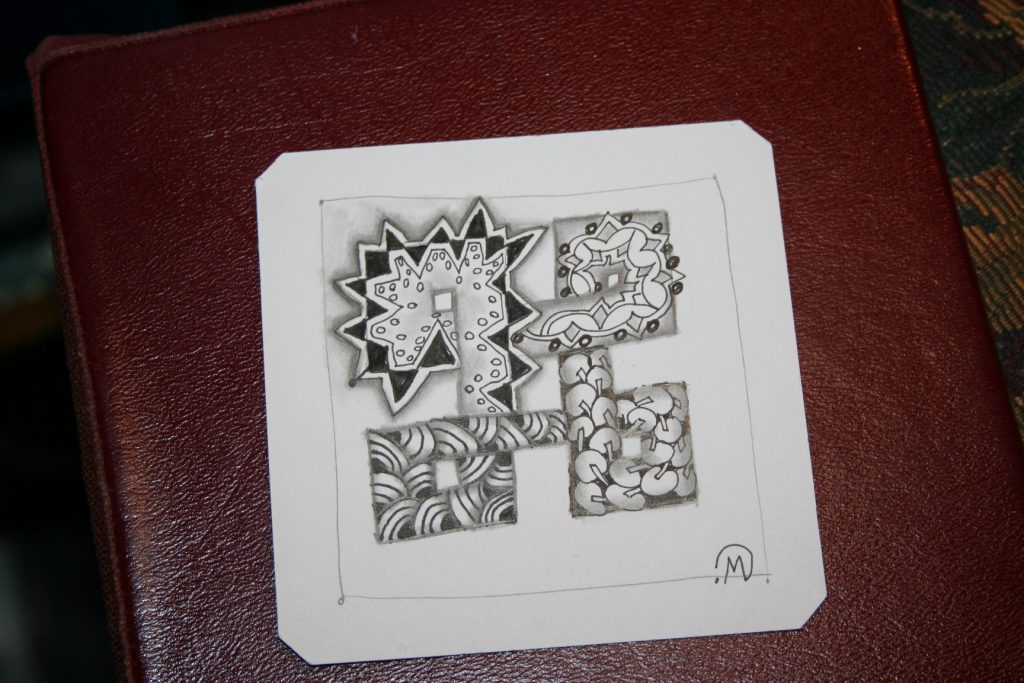 Our dear friends are here this week and Stephanie is a big crafter. She makes amazing and beautiful cards. She does stamping and has used Copic markers for years and years.

Several years ago I got a set of gray neutral copic sketch markers for Christmas. They were suggested in a book by Eni Oken on shading Zentangles. I got them and was intimidated by them and have never used them. (I didn’t get that book back out and see what Eni suggested.) So on their second day here she gave me a bit of a training session on using the copic markers. 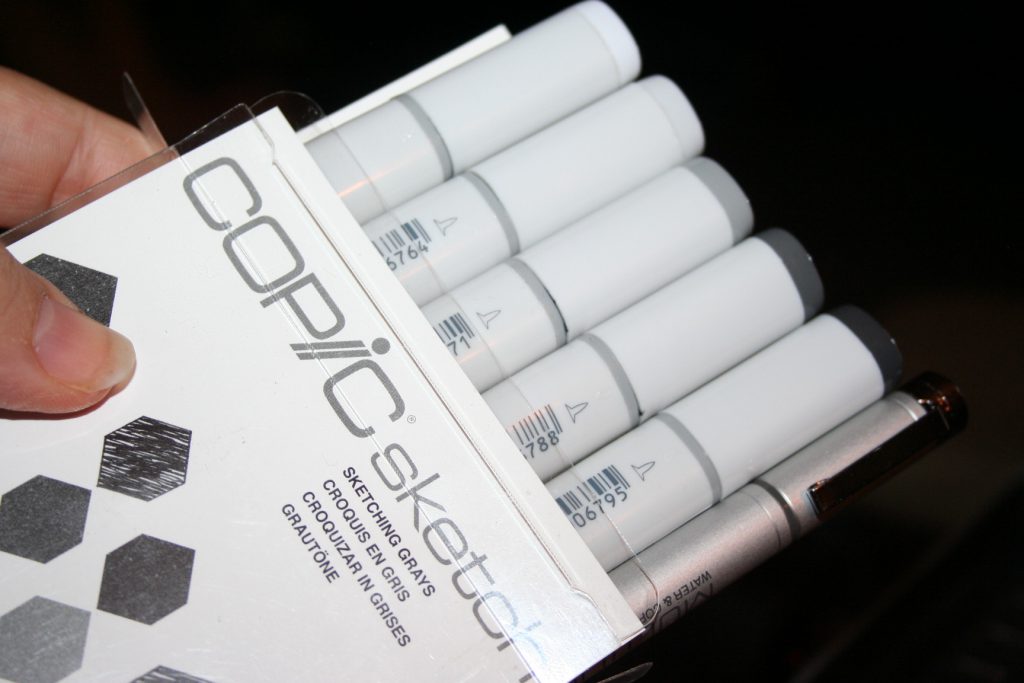 I grabbed a 3.5 x 3.5 bristol vellum tile (one I cut from a larger sheet of vellum), put my corner dots, border, and then drew in a quick string without thinking about it. I decided to use several different kinds of tangles to try out some different methods of shading.

I was so focused on learning how to use the markers that I completely forgot about taking a before scan or picture.

I used Shattuck, Umble, Zander, and some Tipple (?) or at least that is what I think the tangles were.

The first shading I did was on the right hand side on (straight-line) Shattuck.

Here’s part of the scanned tile. 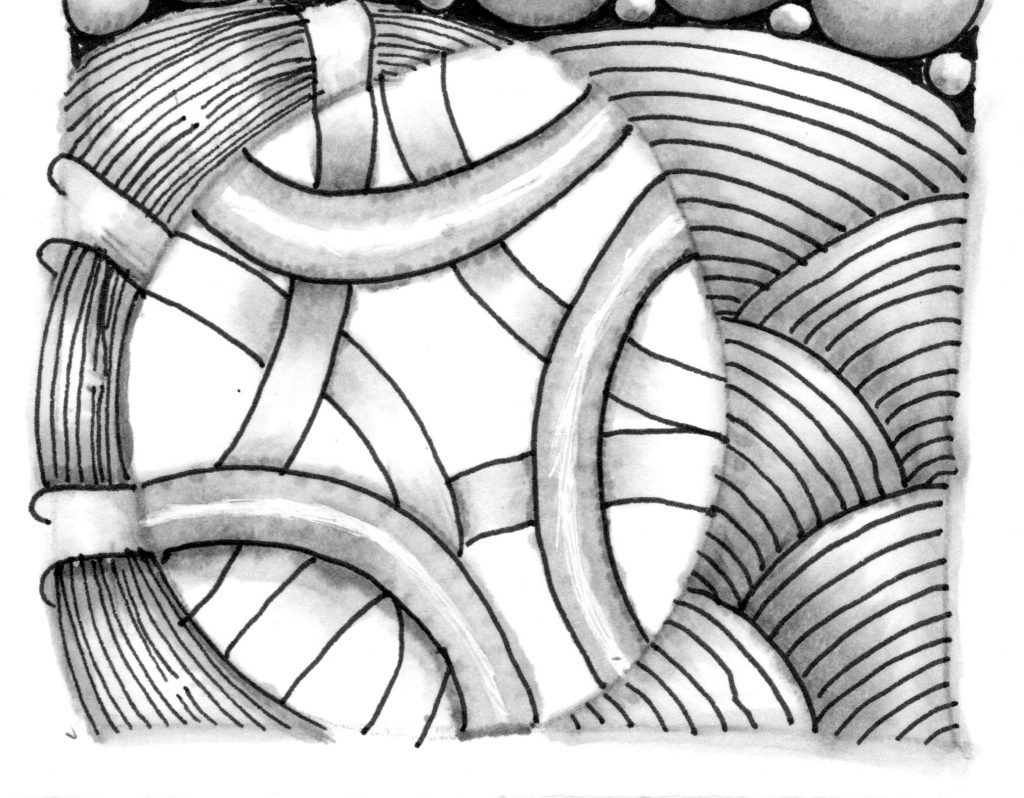 I was pretty happy with the shading there. Then I decided to try something a little different with Umble, there in the white center section. I did the overlapping areas and then decided to try shading the top most parts to be rounded. It didn’t work so good. Then I added a line of white and that only made it worse. Then I shaded the curved zander on the side and it was okay.

The last thing was the orbs on the top and I wasn’t too sure about them. I figured they were going to be the hardest and I wasn’t expecting much.

I was amazed! Here’s the whole scanned tile and then the picture I took outside in natural sunlight. 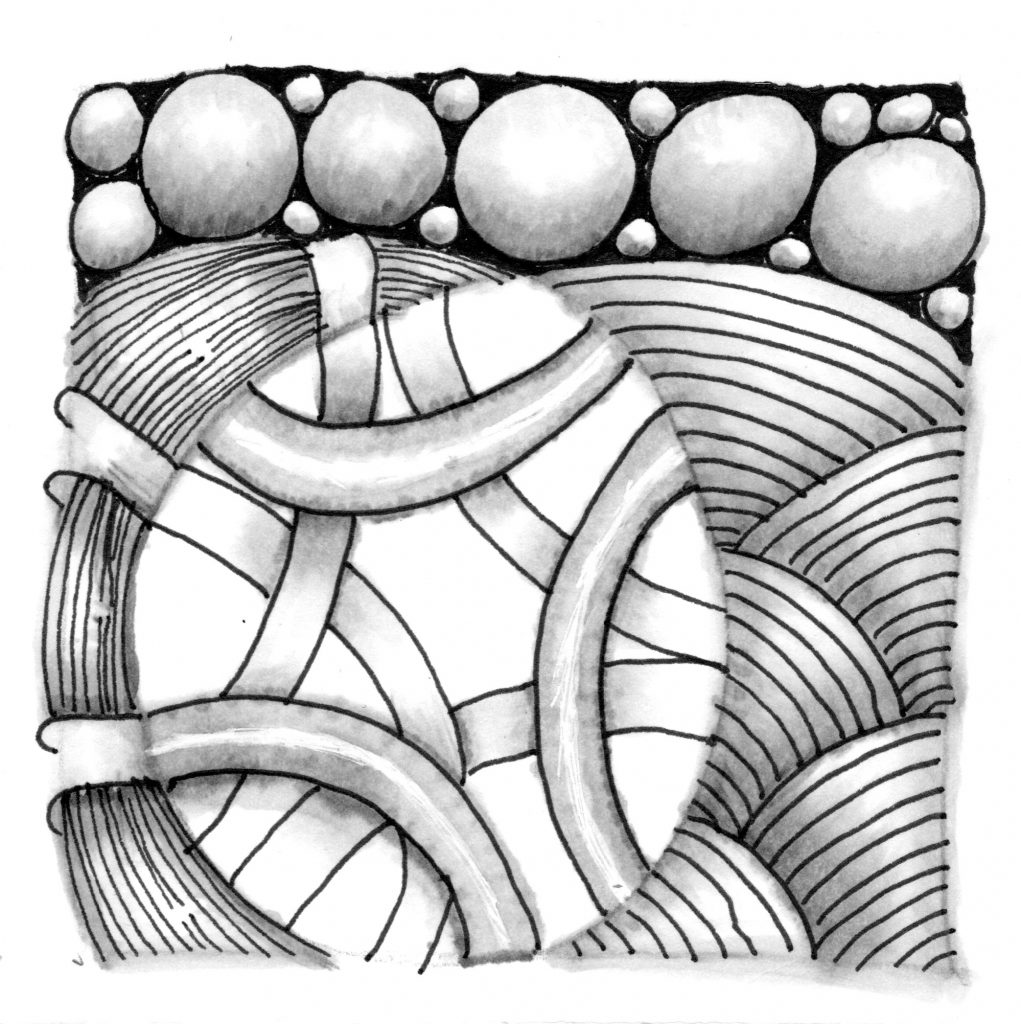 As usual, the scan is a bit harsher and shows all the flaws.

But it looks pretty good from a normal distance. 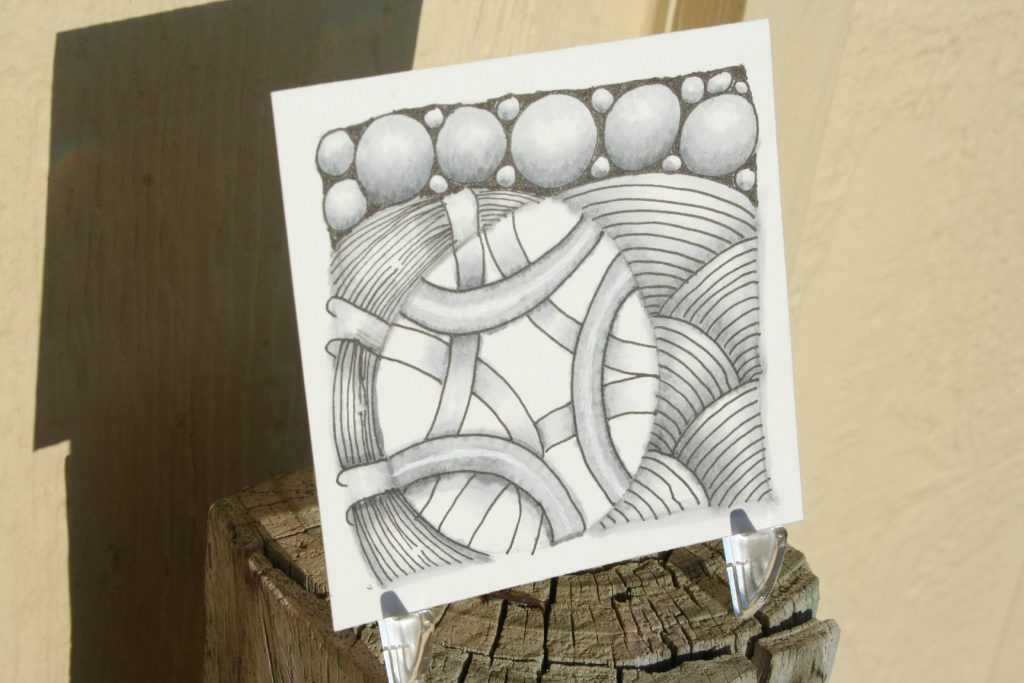 This was definitely something that was worth doing and I will try it again in the future.

It’s not easy trying something new, but it is very rewarding. I encourage you to take time for yourself and do something artistic, even if the first results are as nice as you’d like. Go easy on yourself and let it help you de-stress from your day.

Well, I think I’ve given up on Inktober.

Considering there’s only one day left and I haven’t done any drawing in a week, so I basically did half of Inktober.

I decided to see what the prompt was at Today’s Tangles: Keeping it Classic. That prompt was a very simple one: draw some connected loops.

I went with ‘Nzepple, Shattuck, and Florz for fill tangles. 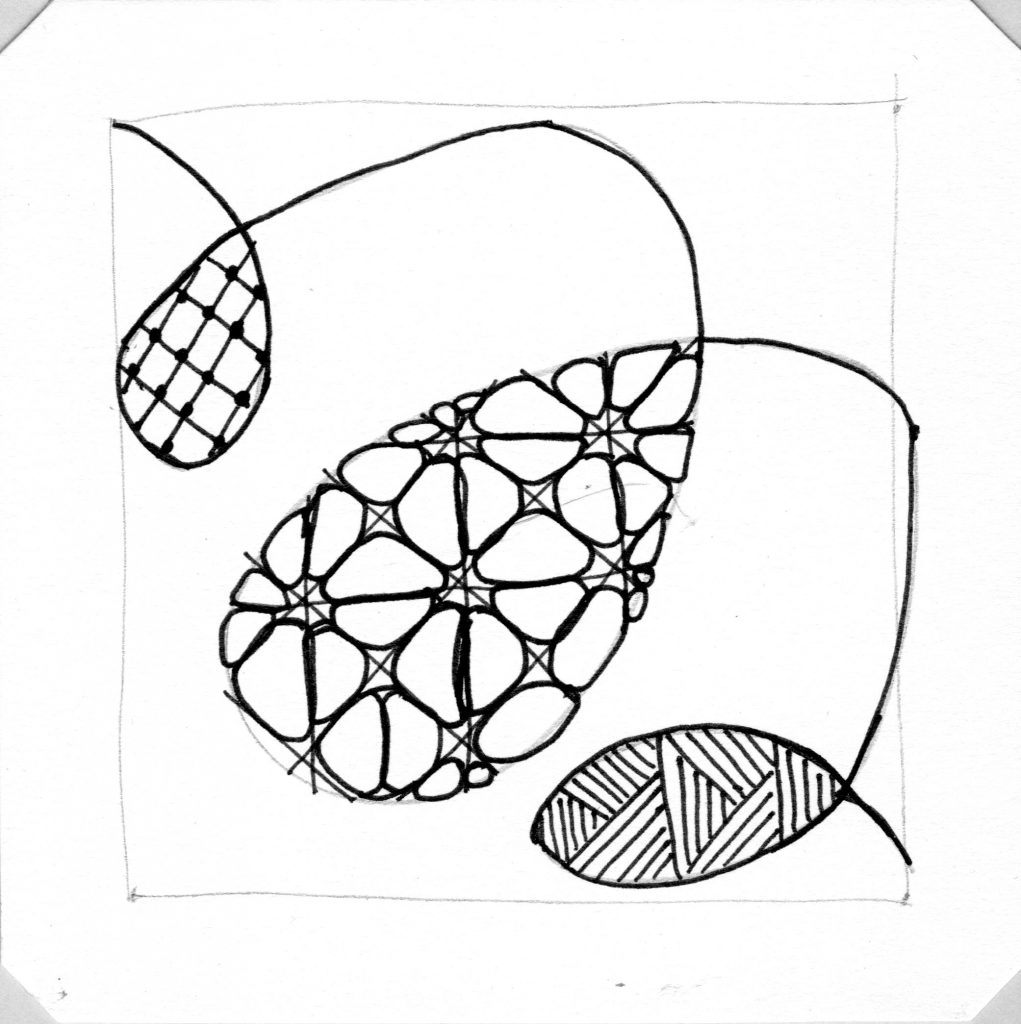 I didn’t actually get a picture in natural light but I did take a picture. 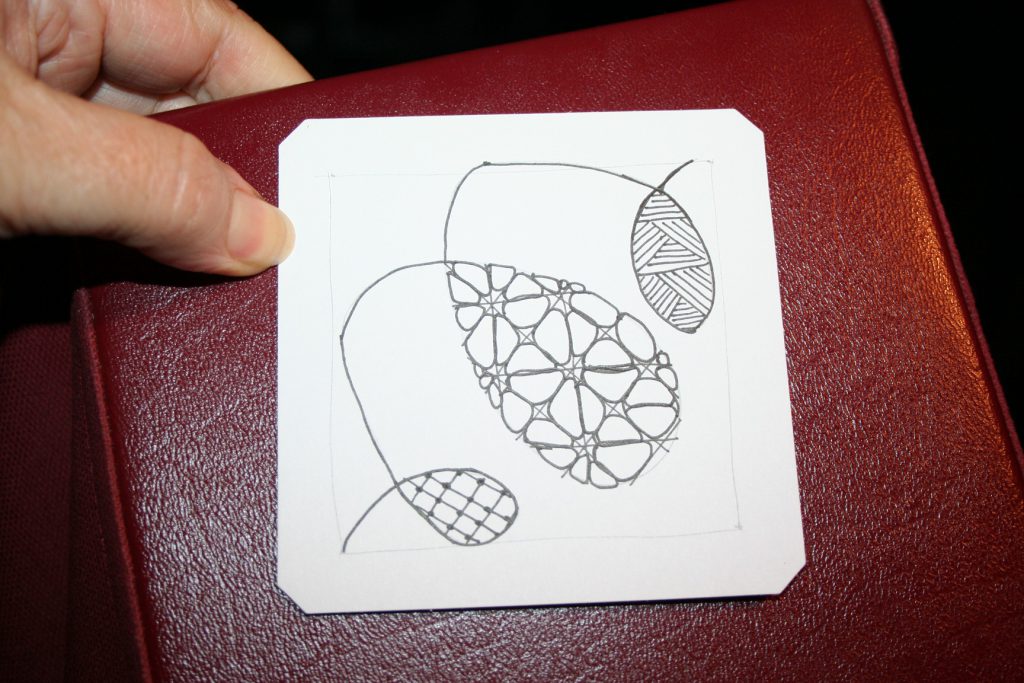 I went for some simple shading. 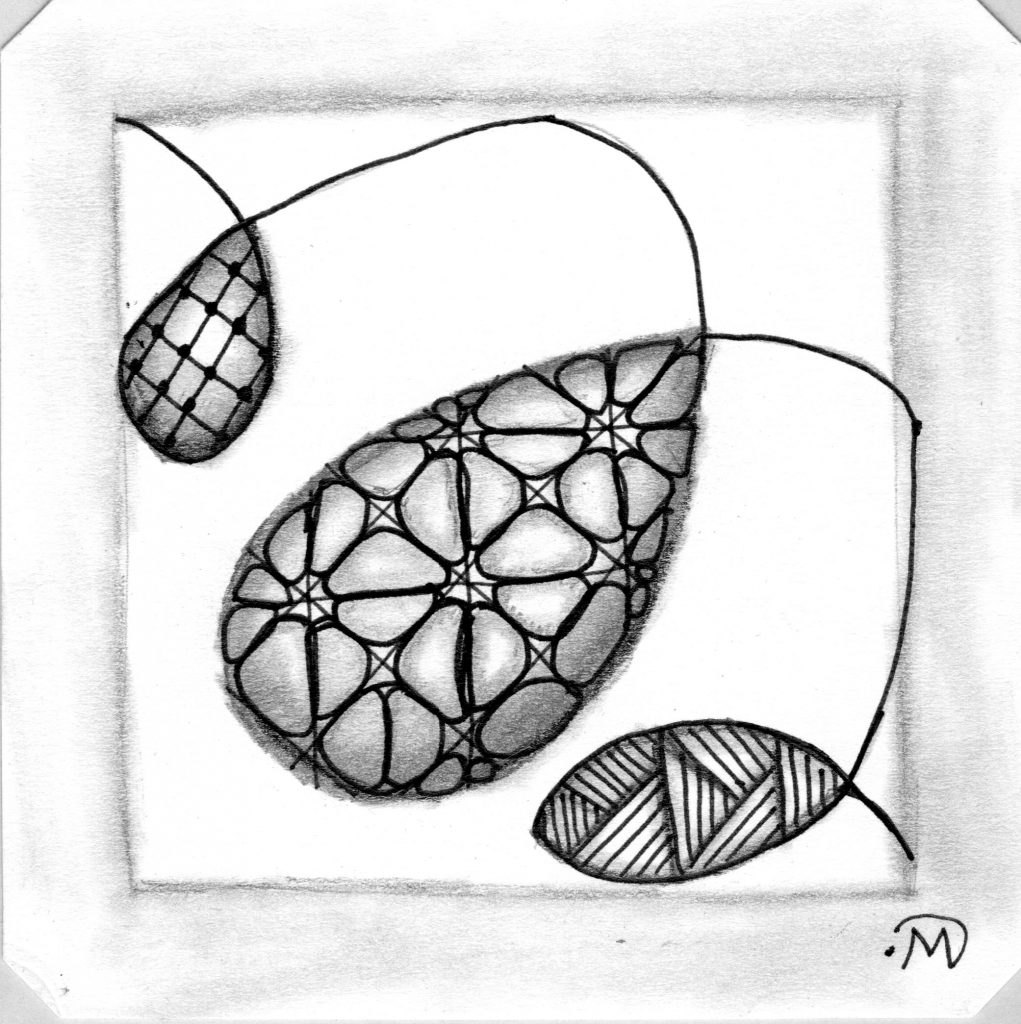 Here it is a bit smaller, which doesn’t amplify the shading I didn’t get smoothed out so well. 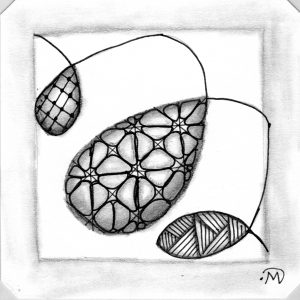 Here is the picture I took of it. 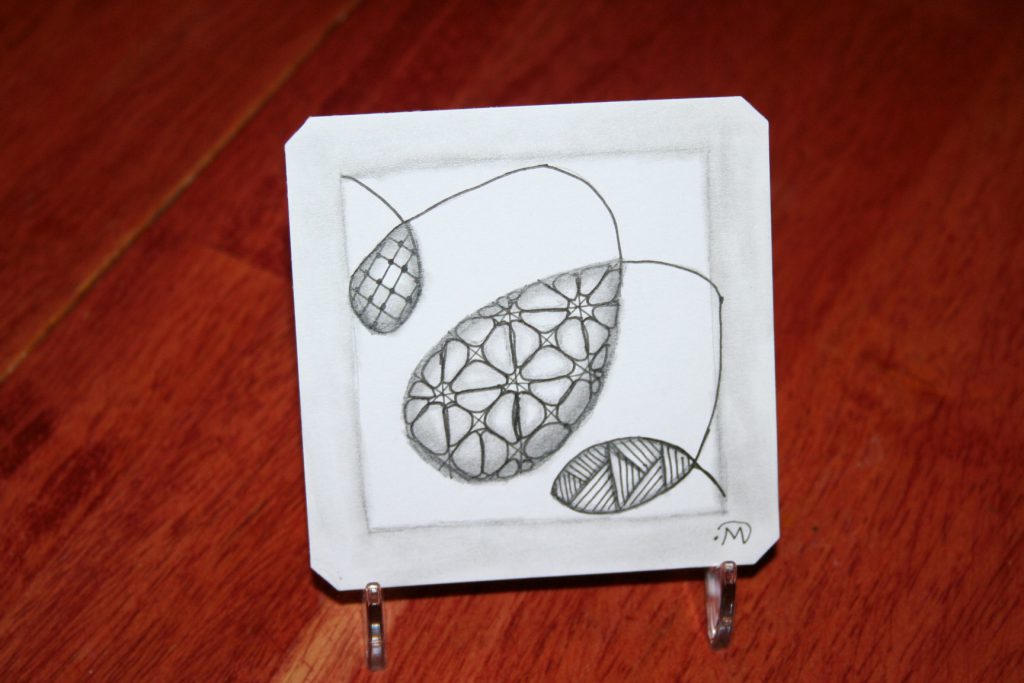 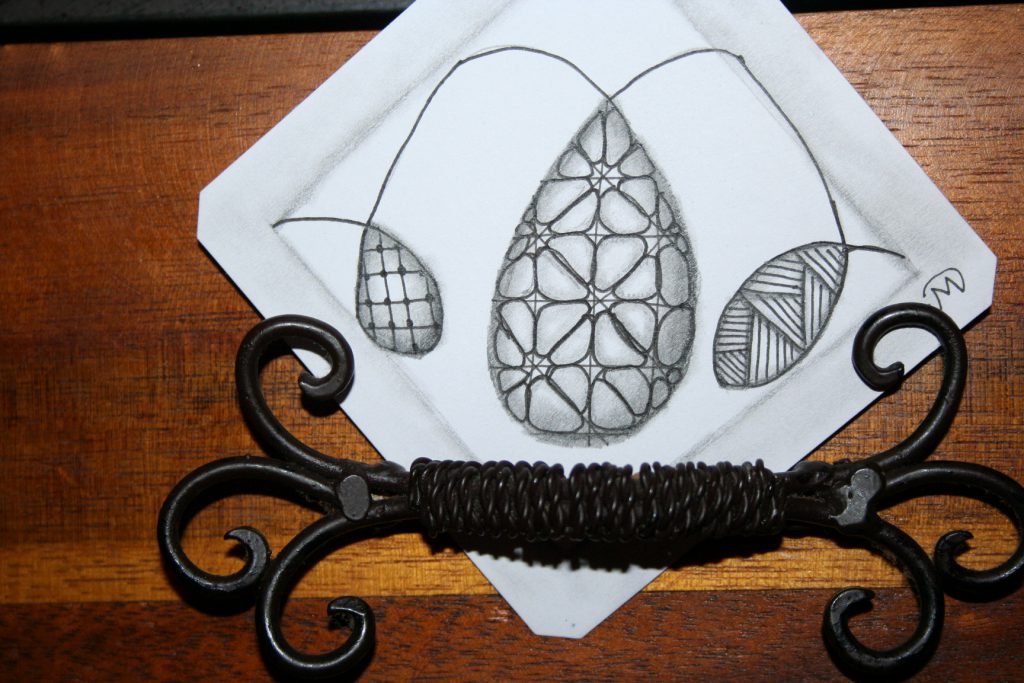 I like how it turned out. It was an easy tile to draw and stress free. I didn’t feel any pressure doing it. Of course all the tangles I used are easy ones or ones I’ve used before, so that may be a part of the lightness and ease of tangling this one.

I appreciate the simple prompts!

Thanks for stopping by. What are the tangles that are stress free for you? 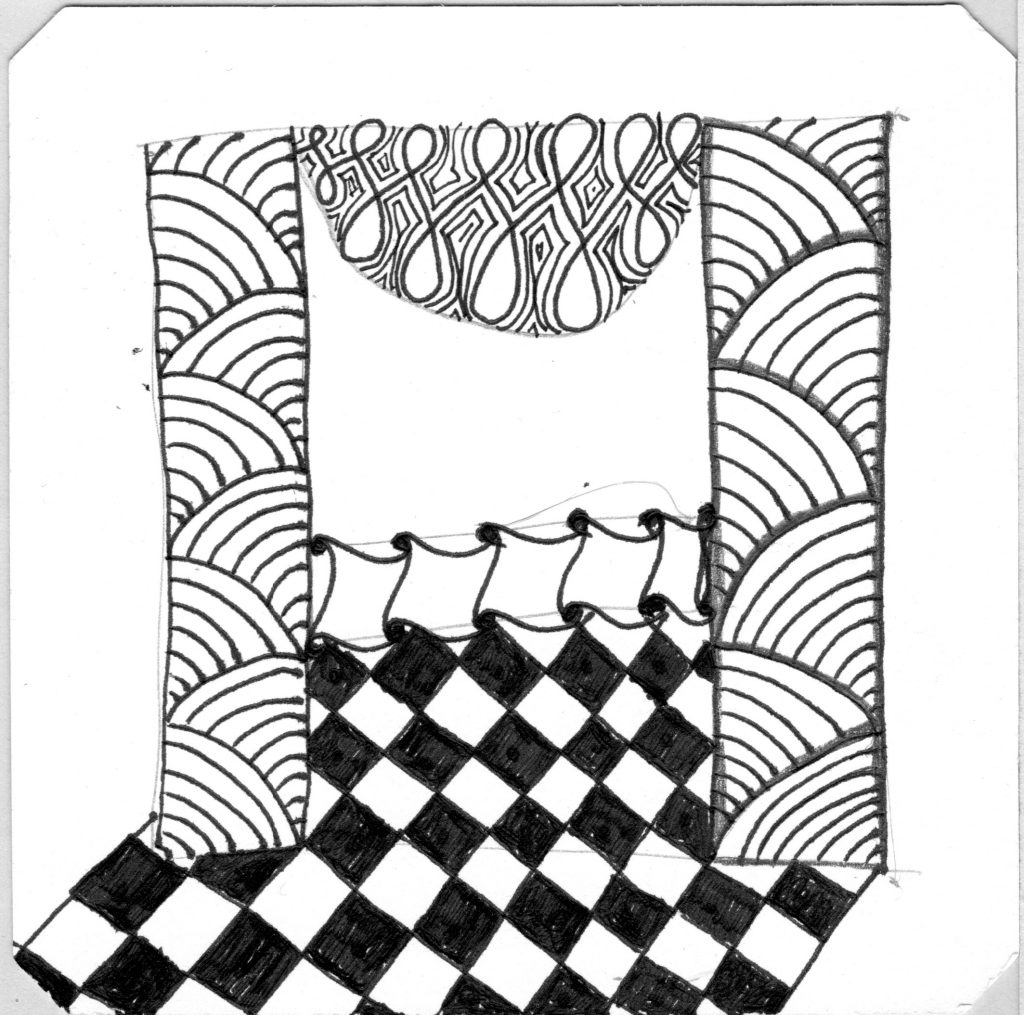 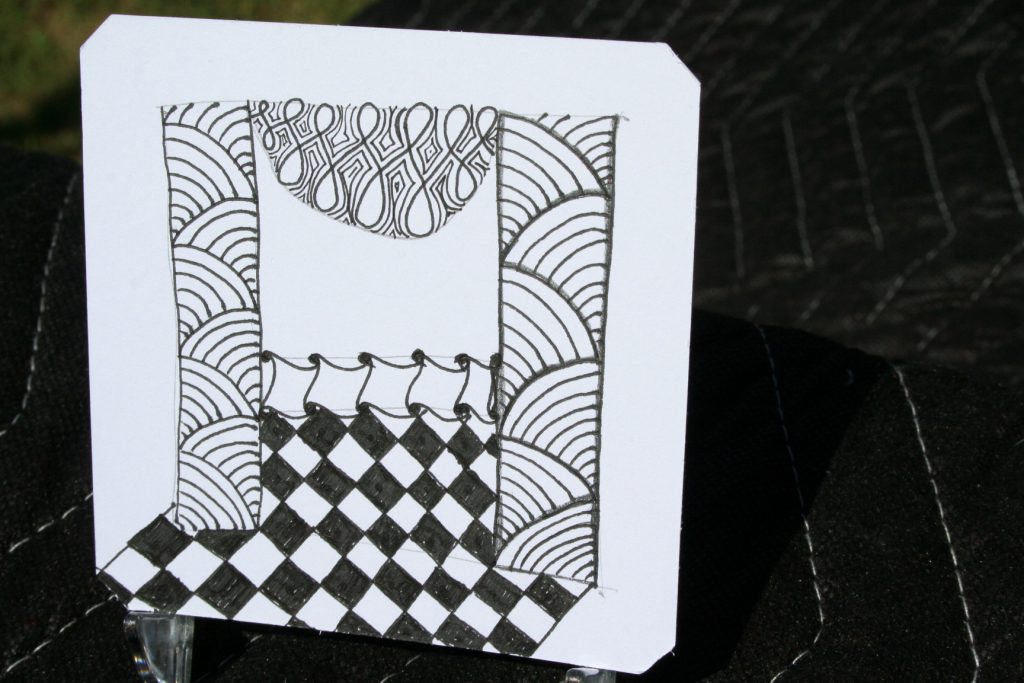 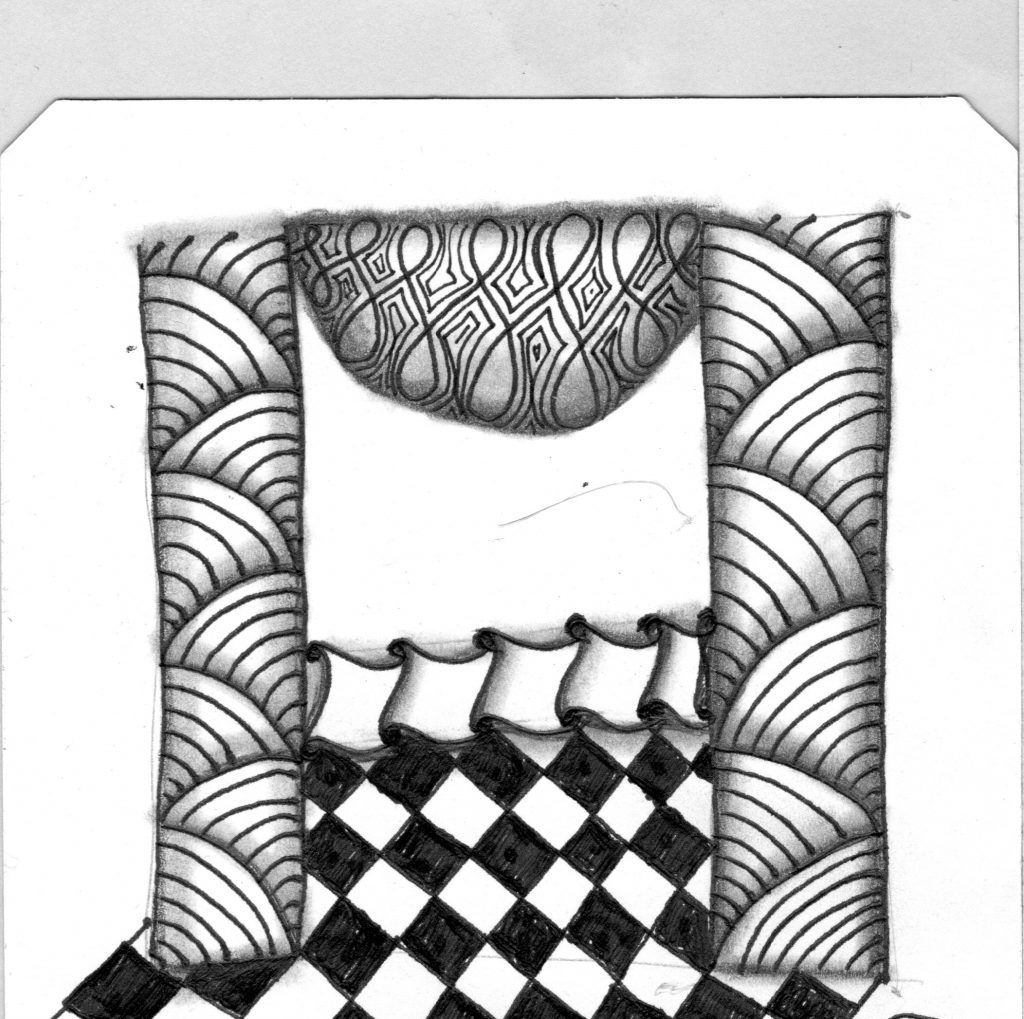 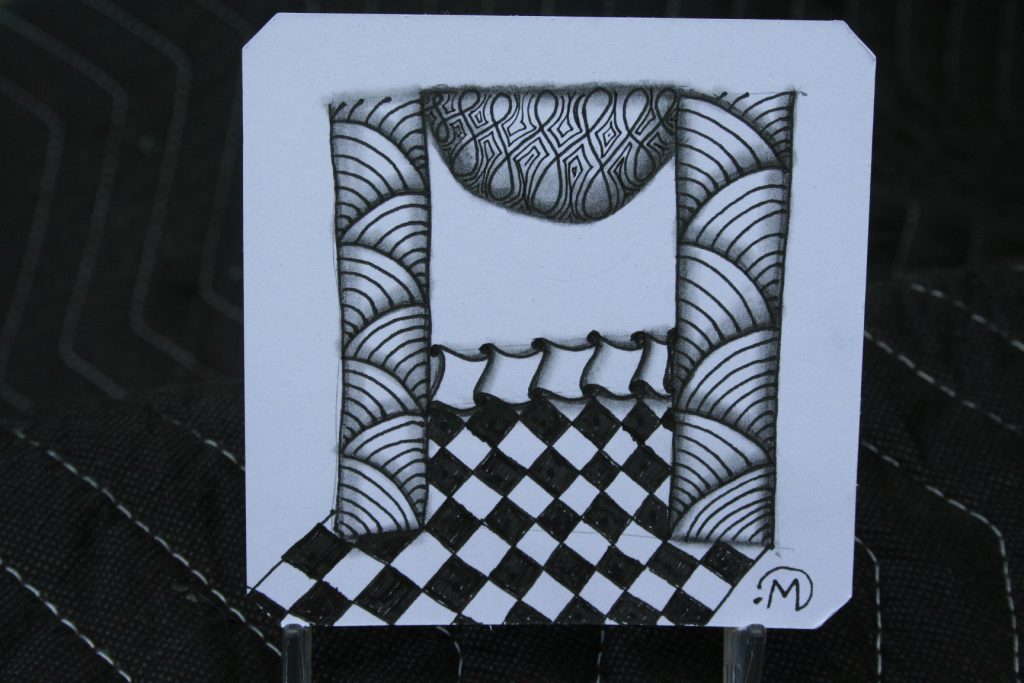