First things first: Thank you faithful commenters LonettA, Annemarie, Sigrid, and Holly! Your comments really encourage me! I appreciate you taking the time to do so. Thank you also to those 3 people that clicked the heart icon as well.

I do this first because I know that when I comment on others blogs, I don’t usually go back and see if they responded, so I figured people that comment on mine probably don’t either but I really want them to know that their efforts mean a LOT!!!

I have wanted to do a zendala for years! I have visited the Diva’s guest blogger, Erin Olson’s blog, The Bright Owl, for years now and loved what she shares there but have never been courageous enough to jump in and give it a try. But since the Diva Challenge this week is to use the provided zendala string, I finally did it!

So, the deal is that Erin provides the template or string in a pdf to download and print. I was intimidated by the process of transferring the string to my tile but pushed on today and it wasn’t as bad as I thought it would be.

First I printed off only the page with the tile size template on it. Then I cut out the square and turned it over. I used my 6B pencil and scribbled all over the back, holding it up to the light every once in a while to ensure that it was blackened behind all the lines.

Then I took a tile and taped the template to the front. Next I used a ball point pen and traced all the lines. When I finished I removed the template (and saved it for later because I think I can reuse this template again with all the pencil I have still on the back). I was shocked to see how dark the string lines were on my tile. So much so that I did take my kneaded eraser and dabbed at the string a bit to lighten the lines.

I had a couple of tangles that I considered for the circles on the outer edges of the string but settled on Jetties because the Weekly Zentangle Tangle Video Facebook group needed some more tiles using Jetties. I also used Meer and attempted a bit of auraknot in the middle but I probably should have stuck with my first thought and used paradox there. I then added some black pearls and a few little jetties on the strings between the big jetties. I’m quite pleased with how this one turned out. 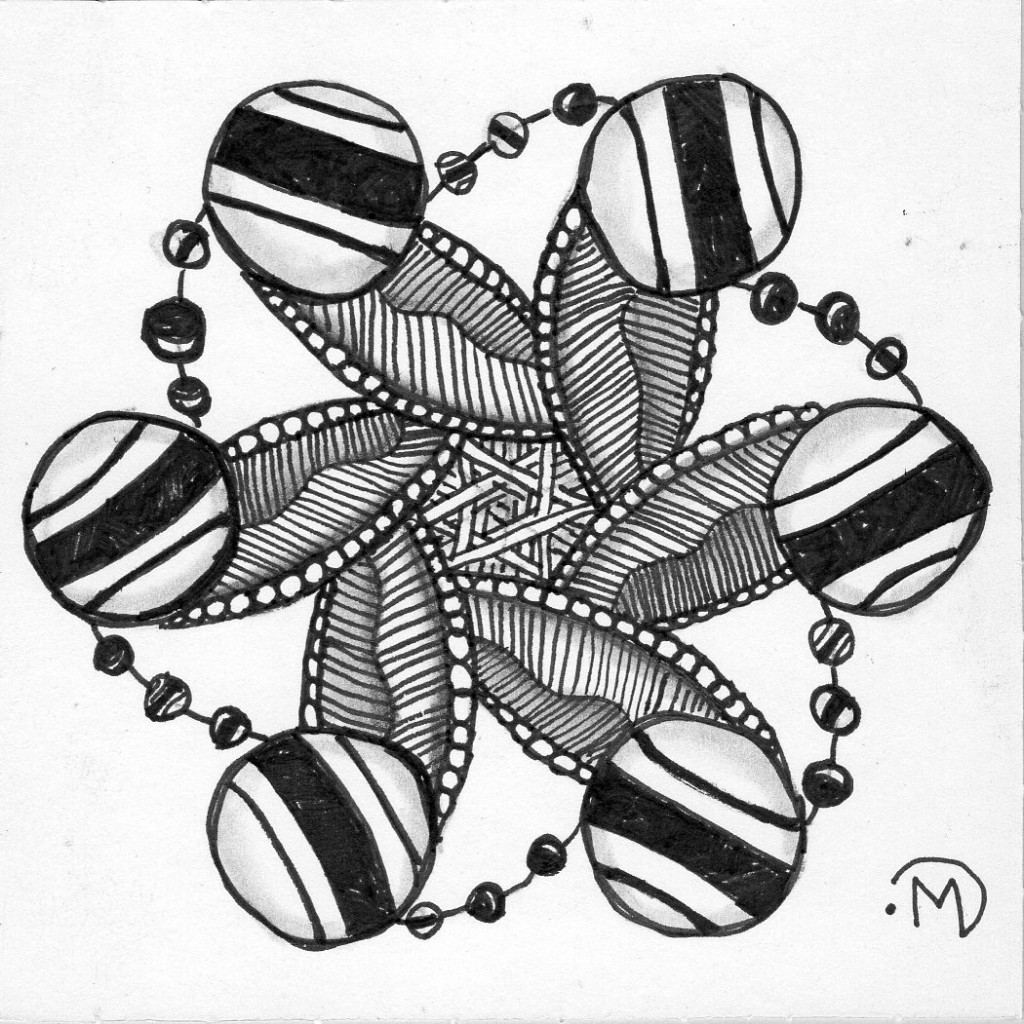 11 thoughts on “My First Zendala!”