Last weekend we decided to go into town and watch a movie. My sister and her family gave Michael and I a gift certificate to the theater for our anniversary and we finally used it. 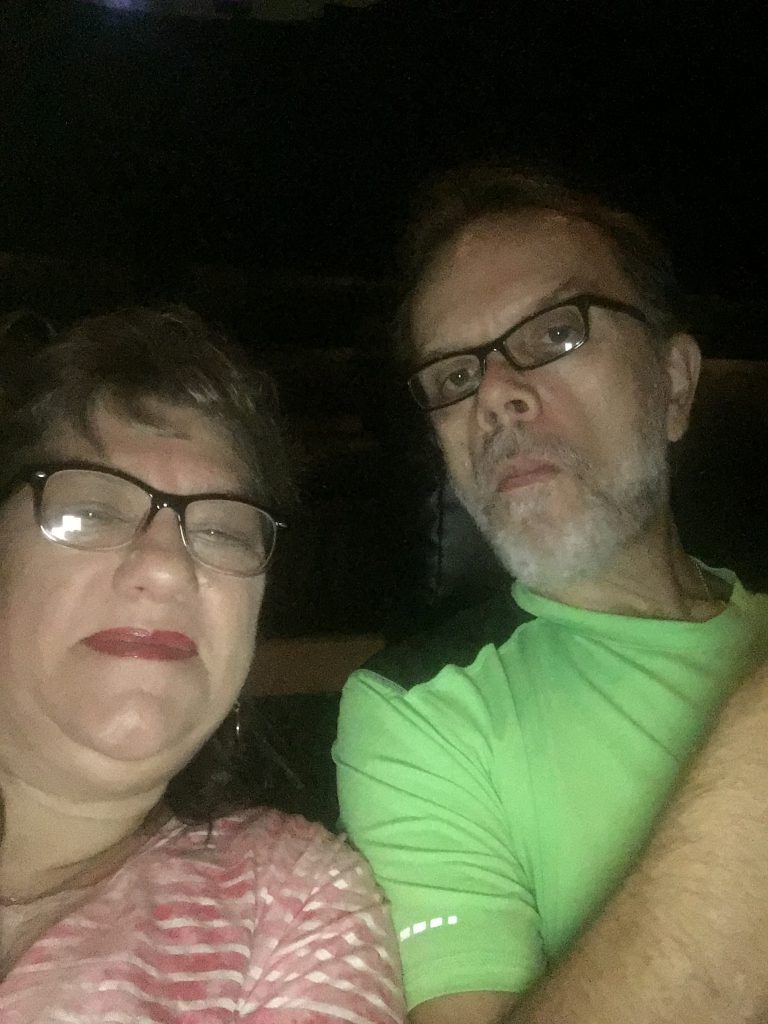 That wasn’t a very flattering picture but it’s all I have. 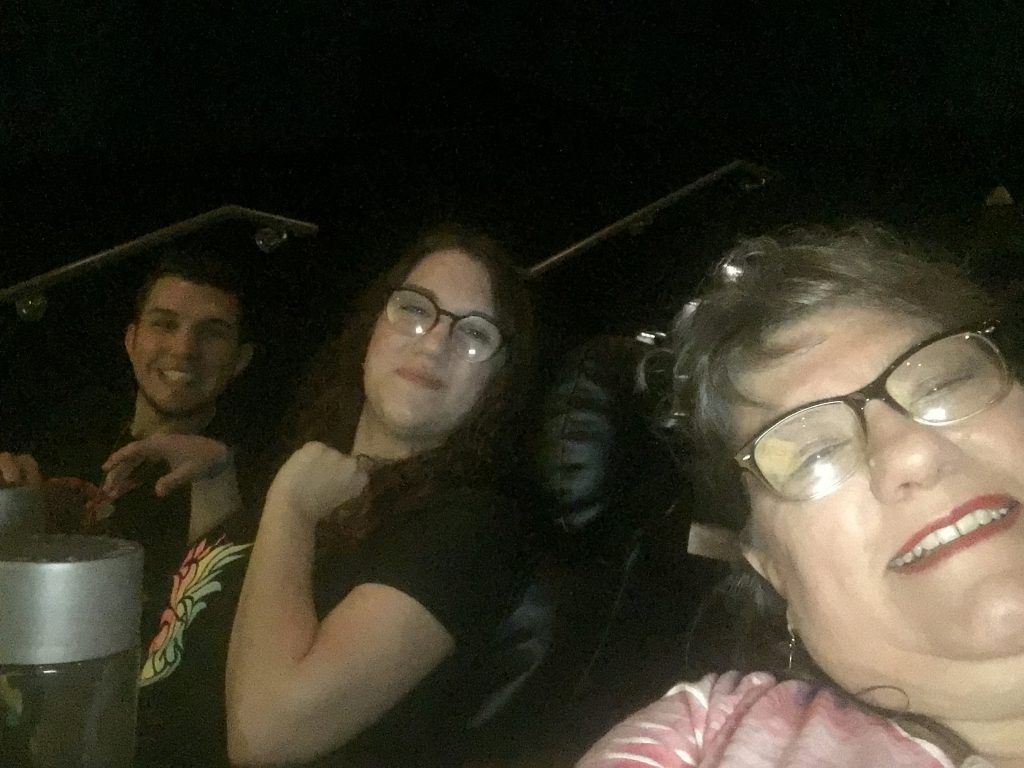 This was the first time we’d been since they remodeled the theater. It is really nice.

We did decide to have a crossover and eat the popcorn. Of course, I paid for it later with a headache but that could have been from eating TOO MUCH of it. Next time we will probably just get one bag of popcorn to share between the four of us, with the buttery topping.

We don’t go to the movies often enough for it to be a problem. If we went frequently, I’d just not eat the popcorn . . . I’ve done that before when I went on limited funds and it was either go to the movie without popcorn or I didn’t get to go to the movie.

It was a good food week.

I’ve gotten some good deals on some fresh salmon lately, so Tiffany and I enjoy it for lunch in a salad. 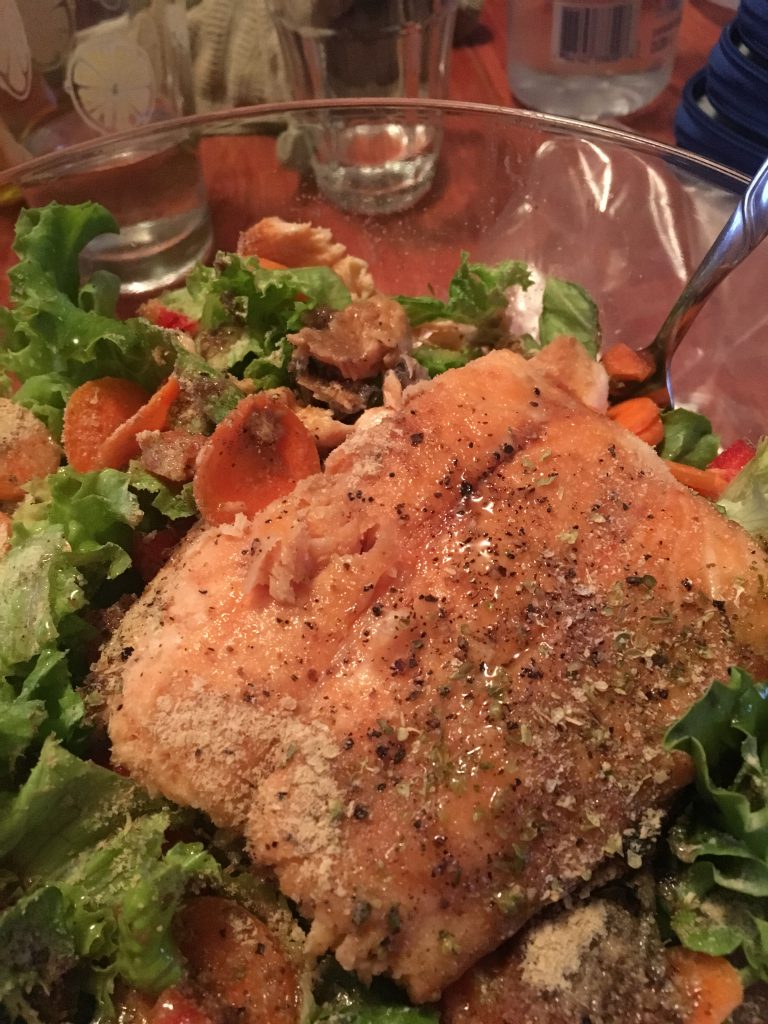 This salad was delicious. I actually enjoyed this one. I’m not a fan of vegetables but I’m learning to eat them more often and it is helping me in my health and weight loss journey.

They are not pretty but they are delicious. Chocolate chip pancakes from the Trim Healthy Mama Table cookbook. 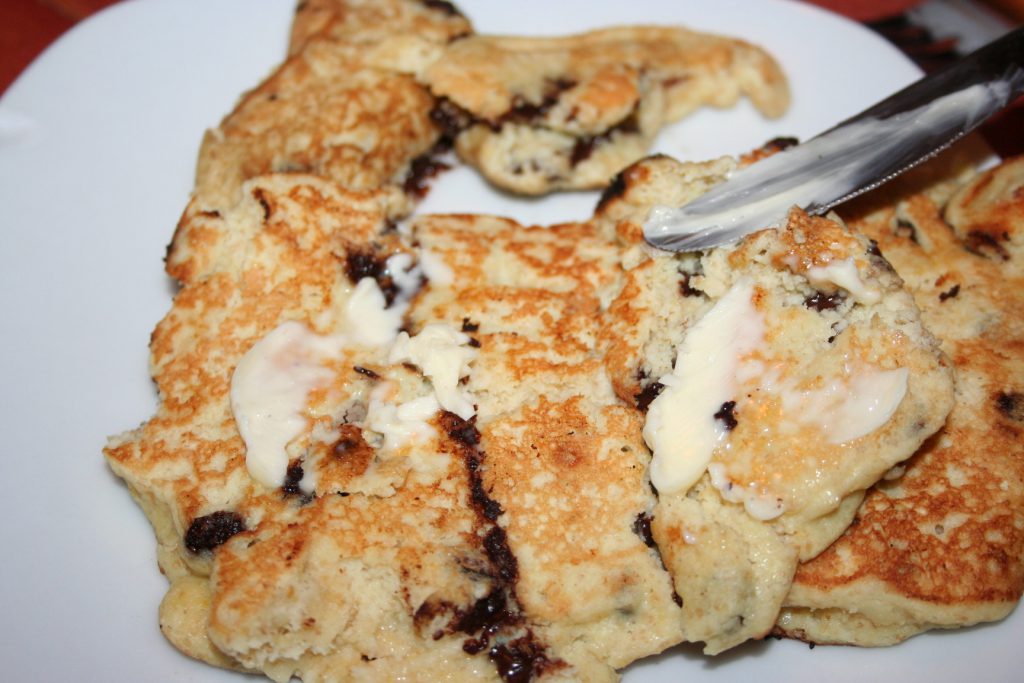 The recipe is single serve, so I have sticky notes on it for multiple batches. We have four adults living here so I always need at least four batches but my guys like a little more, thus I have the measurements for five batches too. But then we have made these when we have company, so I have it for eight batches too. At least I don’t have to do the math every time.

After the hour and a half meeting, Tiffany and I were ready for lunch. We decided on Chick-fil-A since there is one nearby. This particular one has a bit of a parking lot issue. We noticed a lady crossing from the nearby parking lot (not the one next to it but across the access road) to the restaurant. We decided that was a super idea and followed suit. As we were parking, we saw another young lady coming back across the way with her food.

Evidently this is the way things are done at this location.

We ordered Cobb Salads minus the corn to keep in THM S meal mode. Unfortunately we did NOT remember to ask for GRILLED chicken instead of crispy chicken.

Oh was I upset with myself! It was our mistake so we couldn’t very well go up and say anything. I tried to remove the breading but it was stuck like glue. Instead we decided to eat it as it was, with vitamin P for pleasure and know that it is just one more step in confusing our bodies which will enable us to release more weight in the end.

It was tasty and I’ll have to bread and fry some chicken at home some time to put in salad.

Tiffany was battling a migraine headache and we needed to get some gas, so we went across the street to QT. I parked and went inside and purchased the generic ibuprophen for 75¢ and brought it out to her and off we went. As we had entered traffic, I realized I hadn’t gotten gas! Oh brother! I’d get it later.

We headed to Barnes and Noble because they were having a sale and that is one of  our happy places.

We found some good books for Tiffany and even one I wanted. I purchased it and it will be available for someone to give me for Christmas (or maybe I’ll just start using it soon instead–we’ll see).

Yes, if we find something that we really want and it is likely to be gone by the time anyone can purchase it for an occasion, be it Christmas or birthday, we buy it and then give others the option of getting it and giving it to us at said event. We also make gift lists to ensure that people get what they want and limit the number of returns that have to be made by anyone. It works for us.

After spending about an hour and a half in Barnes and Noble, we then did our grocery run which only included three stores this week and not four but we did have to stop by the library for items that needed to be returned.

Unfortunately I made a big blunder last week as well.

My son Brian and his wife, Lauren, had asked us a couple months ago to watch Liam early in October. I did not check the calendar and we just said yes because they needed us to do it. Well, then I realized our conference is the same week of the couple of days they needed us to watch him.

I was trying to figure out a way to keep my word and still do all I need to do for the conference. Michael put his foot down and said there is no way we can keep him. My honey looks out for me and knows that I get tuckered out the week of conference without having a two year old to look after. Unfortunately this was not well received. I love Brian, Lauren, and Liam soooo much. It hurts when things are strained. I hope they know we love them and want to keep Liam another time. (I know Lauren reads my blog–Hi Sweetie!!) I know it will all work out because we are a family that loves deeply. Of course that means that at times we also hurt deeply but enough of that. Hopefully by the time this post is goes live, all is fixed and but a memory.

I hope you have a great weekend, building good memories.