I decided today that I should probably exercise some. I do NOT like to exercise. I live way out in the country and there isn’t really anywhere to walk . . . okay, there are places to walk but I don’t want to go bush walking, you know the kind where you need a machete to clear a path, or walking on HILLY dirt roads. So going for a walk is out, at least for now.

Thus, I decided I would use the Wii U for some exercise today. Then I had to choose which activity to use. I have Zumba, Your Shape, and Wii Fit U. Since I was listening to a preaching audio, I decided to use the Wii Fit U and ‘kill two birds with one stone’. There are many activities available on it but I selected the free cycle. It has a timer of 30 minutes. I was surprised that it had snow added to the scenery. What fun! I had Mike take a picture. 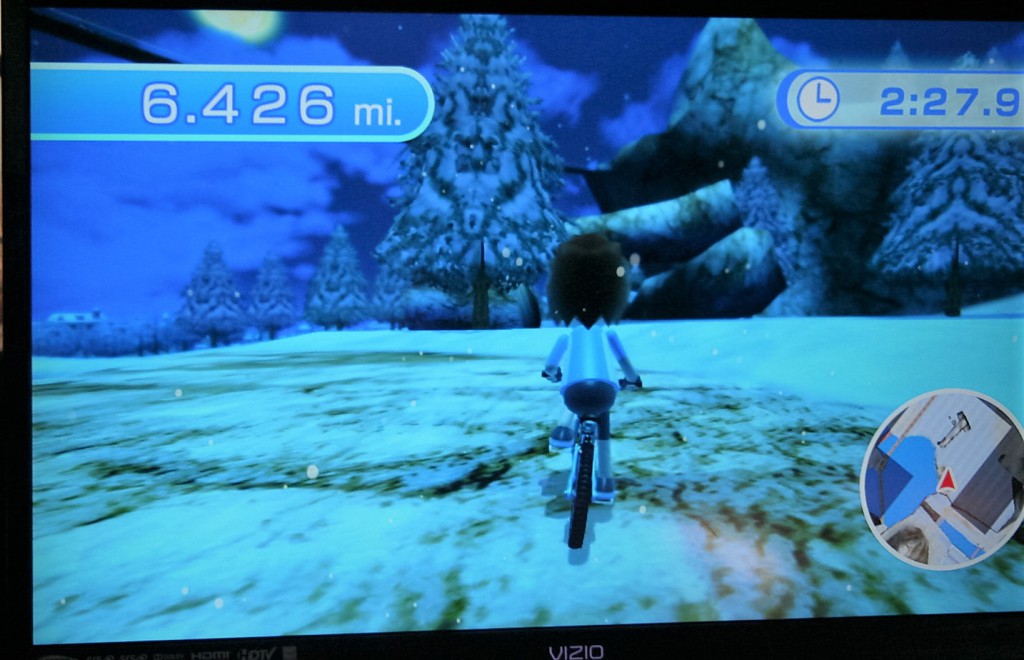 I’m not sure why this picture is soooo blue. It was the first time it was night time while I was riding and the first time with snow. It was a very nice change!

Not that I’ve done this activity a lot but I did it several times on the Wii Fit before we upgraded to the Wii U and these things didn’t happen before.

Here is another picture of it snowing at nighttime. 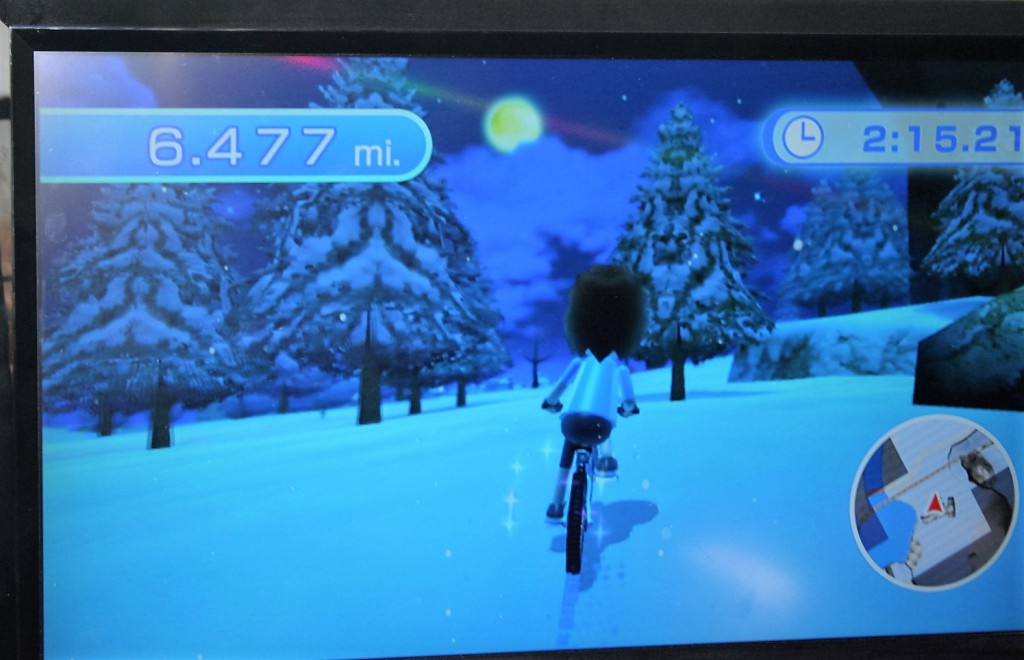 And then I rode to the town and was so delighted to see this . . . 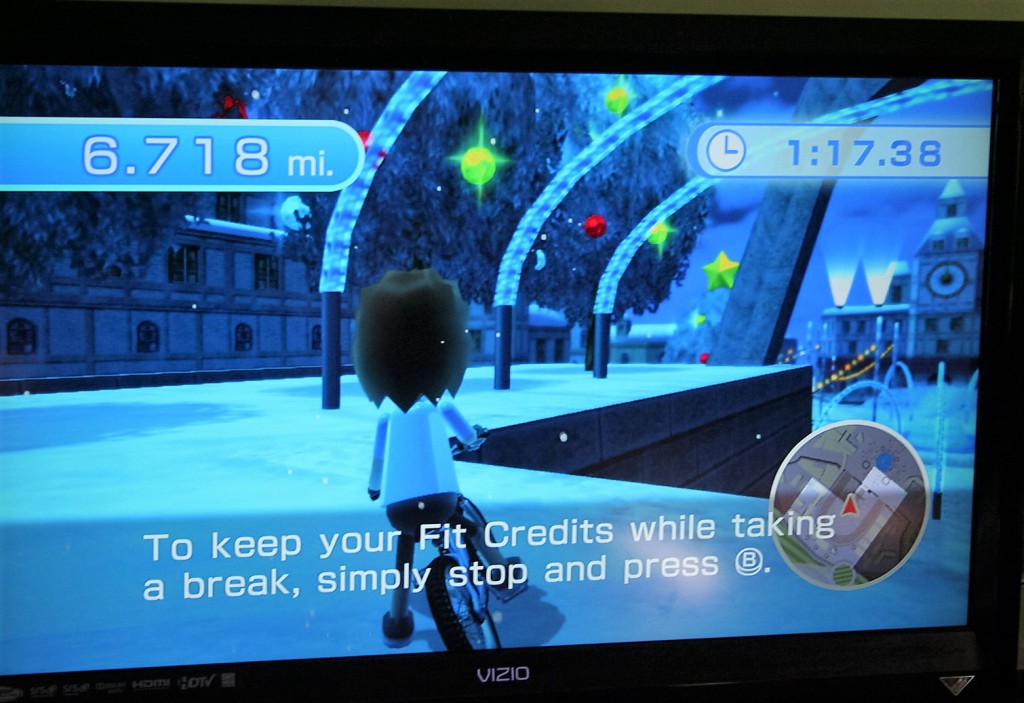 Those are decorated trees and even one with a star on top! Light strings are streamed along the town circle. Soooo fun!!! 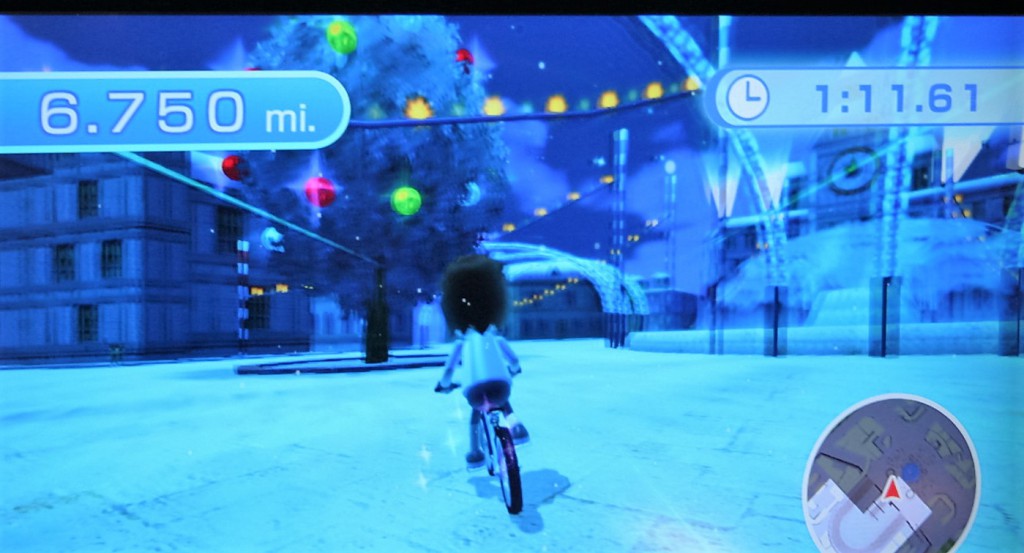 I had a little over a minute left of my 30 minute “ride”. I ended up with nearly 7 miles.

After this, I did some other activities for another 10 active minutes on the ‘game’ and then decided to call it quits.

Since it was warm out today, mid-60º’s, I decided to go outside and extricate my poor rose bush from the vines and weeds that choked it this fall. I put a small dent into the overgrowth and quickly realized that the poor rose bush is going to have to be pruned. I sincerely hope that the vine didn’t kill it because I’d feel really bad since I should’ve freed it earlier. :\

Next Saturday we are starting a Daniel’s Fast. I’m not sure what variation we are doing yet but I am beginning to look for some good vegetable and vegetarian/vegan dishes. Vegetables are not my favorite food and thus we don’t have many of them. The ones we do favor are fried or covered in cheese or a cheese sauce.

I like roasted veggies, mostly potatoes and carrots. I like roasted broccoli and brussels sprouts too but prefer both of these with Parmesan cheese on them. I like them roasted because the caramelization brings out the sweetness in them and I definitely prefer sweet vegetables. So, if you have any wonderful veggie recipes that are dairy free, please let me know.

2 thoughts on “Exercise and Veggies”