On a Carnival cruise nearly all of the food is included in the price of the cruise. There are some exceptions but trust me when I say you can eat more than you need from what is available. In the fine dining room there is generally one menu item, clearly marked, that has an extra fee. Water, lemonade, iced tea, juice, milk, and chocolate milk are all included as well. However, if you want a soda or alcohol, you will have to pay extra for those. We generally drink distilled water at home and did just fine with the water as long as there was plenty of ice.

The Lido deck is where one can find the majority of the food. There were two buffets that had the same food on them. You could enter from either end and stop in the middle, as they had the same foods end to middle on both sides. I really cannot say all that they had because we only ate at these buffets a few times. The first day we had Guys hamburgers, well most of us did. Brian and Lauren ate that most days for lunch. There was salad, tacos, burritos-made to order, pizzas, wraps, and ice cream or frozen yogurt most of the time. Most everything was good.

In fine dining, for dinner, I ate a lot of beef and pork.

That probably doesn’t come as much of a surprise to those who recall that at home I fix mostly chicken and turkey because Mike is allergic to both beef and pork. I had prime rib, braised ribs, short ribs and filet mignon. I cannot remember what other dinner entrees I had but they were very good.

Some days I was not exceptionally hungry so I went with a lighter appetizer. One thing I have wanted to try for quite some time is a bisque. I’ve never had a chilled soup and didn’t want to give it a try at home and waste my money. So I was delighted when I saw Strawberry Bisque on the menu one night. It was easier to give it a try, firstly because I wasn’t paying for it, and secondly because I was not hungry enough for a heartier appetizer.

OMG!!! It was wonderful!!! So much so that a few nights later I got the Peach Bisque; it too was great. Lauren even tried it and liked it. It was light, slightly sweet, creamy, and cool, which was a plus considering it was hot.

I will be looking for a recipe to make these this summer. But I do have to mention that Lauren and I tried a ginger mango bisque (I think that was it) but the ginger messed up that yummy goodness. It’s okay thought because that night we had gotten a few appetizers to split.

Cruises are wonderful for that, order as many items off the menu as you like. Sean ended up getting several desserts each night. By the last night, Wilfredo knew he was ordering nearly all the desserts and brought the one he didn’t order, just for us to try. It was quite fun. At 22 years old, Sean is still, pretty much, a bottomless pit and can down thousands of calories without many consequences.

Here is the picture I took of the wonderful strawberry bisque. 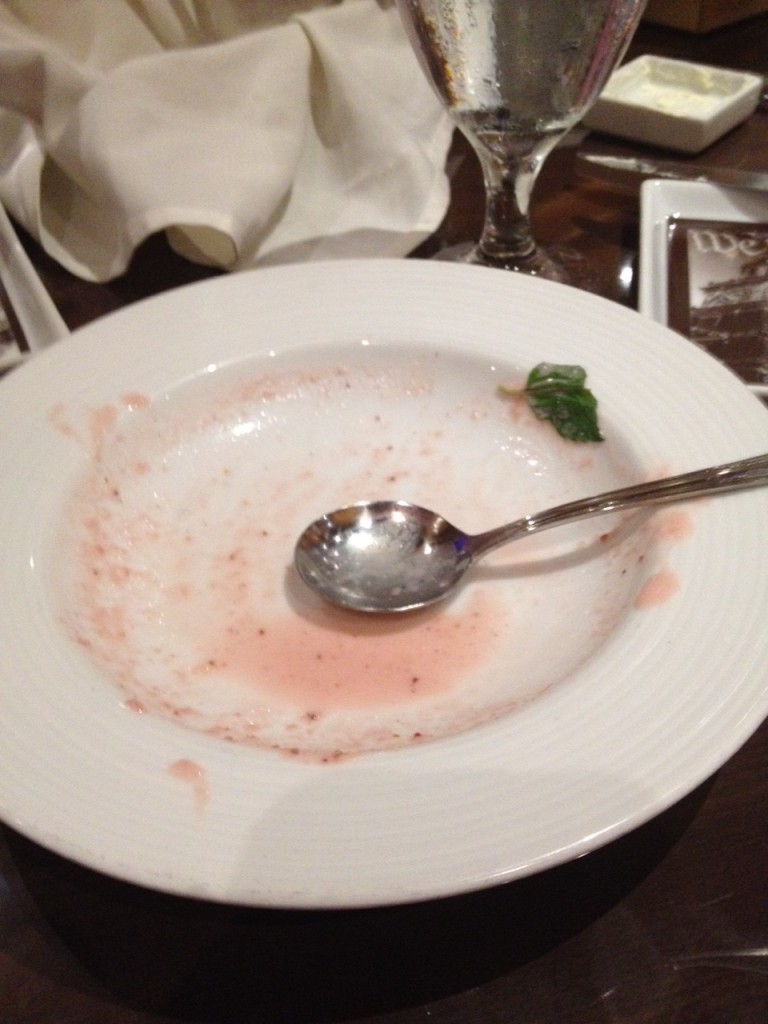 Yep, that’s right. I forgot to take a picture of it until it was all gone. But that is the only food item I did attempt to get a picture of.

I guess I was too busy living in the moment and enjoying the wonderful food and fellowship with my family.

It seems that Carnival Cruise Lines is rather famous for the Warm Chocolate Melting Cake. I have to say that the Hot Fudge Pudding Cake recipe is very similar to it.

I could go on and on talking about the wonderful food on the cruise but I will close for now. If you get a chance to go on a cruise, I recommend it; just keep your expectations low and you should have a marvelous time.