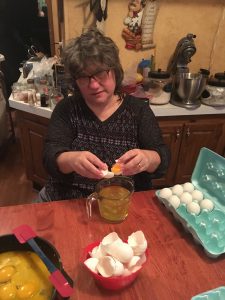 So I did really good over the holidays at the end of last year staying within three pounds of my current weight. We had all kinds of yumminess (if that is not a word it should be

), I did not feel deprived whatsoever, and I did not stick to the ‘three hour rule’ of Trim Healthy Mama (THM), which means that I did not carefully watch the clock to ensure that I was not eating too often and if others were having a snack, I joined in.

Well, I was certain that after the holidays I would faithfully follow that rule and get back to eating more salads and veggies in general, and would begin losing weight once again. But alas, March came and went and I was still firmly planted in the same weight, even my allowed three pounds up. I began getting frustrated with myself and knew I needed to do something.

Last September I was in a similar position only about twenty pounds heavier. I’d been on THM for a few months and saw a little weight loss but not much. I had been on keto for a good while prior to THM and the scales had not moved much. So I have come to realize I have stubborn weight issues. This probably has come from a stint on the hCg diet, entering menopause, and really a lot of dieting/lifestyle changes over the years.

When I purchased the Trim Healthy Mama Table cookbook they offered a free month on their membership site with it. I doubted that it would be very beneficial to me but since it was free, I checked it out. One of the things on that site are some ready made menu plans. I don’t generally like menu plans because it usually includes foods I wouldn’t normally eat. But one of them caught my eye, Stubborn Losers Menu, and there were three of them.

I talked with Tiffany and we decided we’d give it a try. Now, I used to weigh myself daily and when I was really addicted to the scales, more than once a day but that proved to be unrewarding.

Anyway, in the previous year and a half to two years I had stopped weighing altogether. I could tell how well things were going by the tightness or looseness of my clothing; trust me when I say that clothes do not shrink in the laundry as much as I had hoped they were.

Okay, in all honesty, I would step on the dreaded scales when I needed to prove something to myself or just to know my clothes were telling the truth. At any rate, I decided I needed to know exactly where I was at the beginning of trying the Stubborn Losers Menu to see if it was working. I also gave myself the leeway to check in again halfway through the week to see if eating things I wouldn’t normally eat was worth it.

Well, that first week at the mid-way point I had dropped a pound and a half. That was good considering I’d been stuck at the same area for a while. It encouraged me to continue on. By the end of the first week I’d lost a total of three pounds. Now that was good. So we proceeded on to the week two menu. By the end of that week, I’d lost an additional three pounds! That was six pounds in two weeks. Now that may not be good for a lot of people but I was thrilled I was finally loosing weight again. The same thing happened with week three. So in three weeks I’d lost nine pounds.

I was concerned though because our church had a conference the next week and I would be eating out most days. I was very concerned that I wouldn’t be able to keep the weight off and that would be depressing. But by the end of conference week I’d lost an additional two pounds!!! Hallelujah!!!  And that is pretty much where I have stayed ever since. Michael’s birthday happened and then the holidays and my sole goal throughout the holidays was not to gain any weight and enjoy the holidays with family. I was successful.

However, I expected to begin losing again after the first of the year but here it is nearing the end of April and that did not happen. Nearly a third of the year is gone and I’m still where I was last October, give or take a few pounds. Now I must admit that I am at a weight that I lived at for many years; it is one of my set points of weight, so I know it will take a bit to get through it.

So, Tiffany and I decided it was time to do the Stubborn Losers Menus once again. I began by weighing myself so that I knew where I was starting from . . . yep, at the high end of those same three pounds. Ugh! This time I did not need to weigh myself during each week because I know that if I follow it without cheating, I will lose the weight. We are currently nearing the end of the second week and a few days ago I ate some on plan chocolate chips (too many of them) when I wasn’t supposed to. I decided that I needed to see where I was. Unfortunately I was only down a pound and a half! But I was down that pound and a half even after the chocolate chip indulgence (fyi: they are stevia sweetened) so at least I am making progress.

I determined to be strict with myself and stop allowing myself the little bit extra each meal, if I was not still HUNGRY; there are provisions to keep you from being hungry and miserable.

Low calorie and hydrating suggestions. The next morning I weighed once again to see if I’d lost those chocolate chips and thankfully another half pound had disappeared.

So, I probably won’t weigh again until after the end of the third week on the plan and will decide how strict I’m going to be afterwards at that point. Odds are high that I’m going to need to have salads daily. Sometimes they are tricky and you think you are getting away without a salad for a meal but they just disguised it by putting it into a “wrap”.

So that is where I am. The progress is slow but sustainable. Really at this stage of my life, I’m just so very thankful that God has lead me to something that works. I am anticipating a breakthrough to the next lower ten-pound bracket within the next month and then expect there to be a weight loss whoosh!

Yes, very technical. hahaha But every so often my weight becomes stubborn and doesn’t desire to leave but I force it into submission by eating things I wouldn’t normally eat (like plain tuna in a salad of some lettuce and lots of celery and green onion not with mayonnaise but with soy sauce and sesame oil for example) and lower calorie snacks like Tummy Tucking Ice Cream or Fat Stripping Frappes instead of allowable chocolate chip cookies or fudgey cake or chocolate zucchini cake or cream-filled chocolate cupcakes. All of those things are delicious and completely allowable on THM BUT not conducive to ME getting rid of stubborn weight.

I highly recommend Trim Healthy Mama to you, not just for weight loss but for life. But if you’ve tried everything and still cannot seem to get the weight to move, it is soooo worth the $10 to the THM membership site to get access to the Stubborn Losers Menus. On top of that, you also get 10% off any orders you place from them.

I hope this is an encouragement to you. I’ll try to remember to get some pictures together this week to share a good recipe next week (but I’m not making any promises