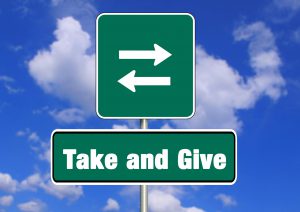 It’s important in a marriage to know when to give in. It really is. Sometimes there is just something that is not worth making your spouse unhappy about doing. But then other times the thing is important enough to stick it out to get what you need, in which case it is your spouse’s turn to relent.

My father had open heart surgery last week fixing an aneurysm, valve, and blockage. It was a lengthy, specialized surgery and we are very thankful for the talented surgeon that performed it. Many people have prayed for him which we are sure has aided in his speedy recovery and shorter surgery than anticipated.

During this week, Mom has not left his side, except when required to by the hospital.

She has been his helpmeet for 56 years! They’ve learned a thing or two about the give and take.

Mom has been his helpmeet for so long that it is only natural to help push him to do the things he needs to do to recover well from his surgery. There were some difficult things he needed to do and she was there to support him and encourage him to do them, even when he didn’t want to.

Michael and I have been married 31 years. We too have learned this art of give and take. Michael loves to protect me and keep me safe. It was a stretch for him to be okay with me getting outside his comfort zone, but with my dad being in such a serious situation, he gave in where I was needing to take.

Love isn’t about getting your own way. It is about sharing and working out a balance of giving and taking.

I hope you will be a good giver during this holiday season and also take with humbleness.