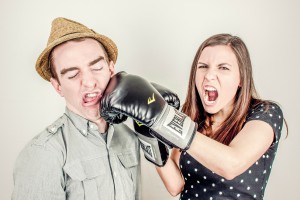 This is going to be hard for me to admit because of what I now know but I think it will be helpful to others, so I will share it here.

You know how when you are younger and you are hanging with a friend and someone says something funny or outlandish and you punch or slap them in the arm? Well, I had a tendency to do this with Mike. He was my best friend so it seemed natural.

This became a problem when it grew to where I’d slap his arm when I was a bit frustrated with him. As most people will acknowledge, this is not appropriate for anyone. You don’t hit a child in anger; a man should never hit a woman. Thus a woman should not hit a man either. I should have stopped it before it became a habit and second nature to hit his arm.

Beyond that, it is definitely NOT showing your man respect. You know, that thing that men need like women need love. It is especially disrespectful if you are angry when you do this or you do it in front of others.

I doubt that if someone saw me slap my husband’s arm while angry or frustrated that they would think I was acting respectfully or even properly. Then add to it that I’m a Christian and I’m sure I would not be a very good witness or example to others.

What it boils down to is that I’m upset and acting immaturely. I need to control myself and respect my hubby. He would not think of hitting me that way; I should not either. Touch should always be a positive thing, never done in anger or frustration.