Today I decided to use one of the pre-strung zendalas that I got for Christmas several years ago. I needed something that was simple this time around.

So here is the tile I went with. 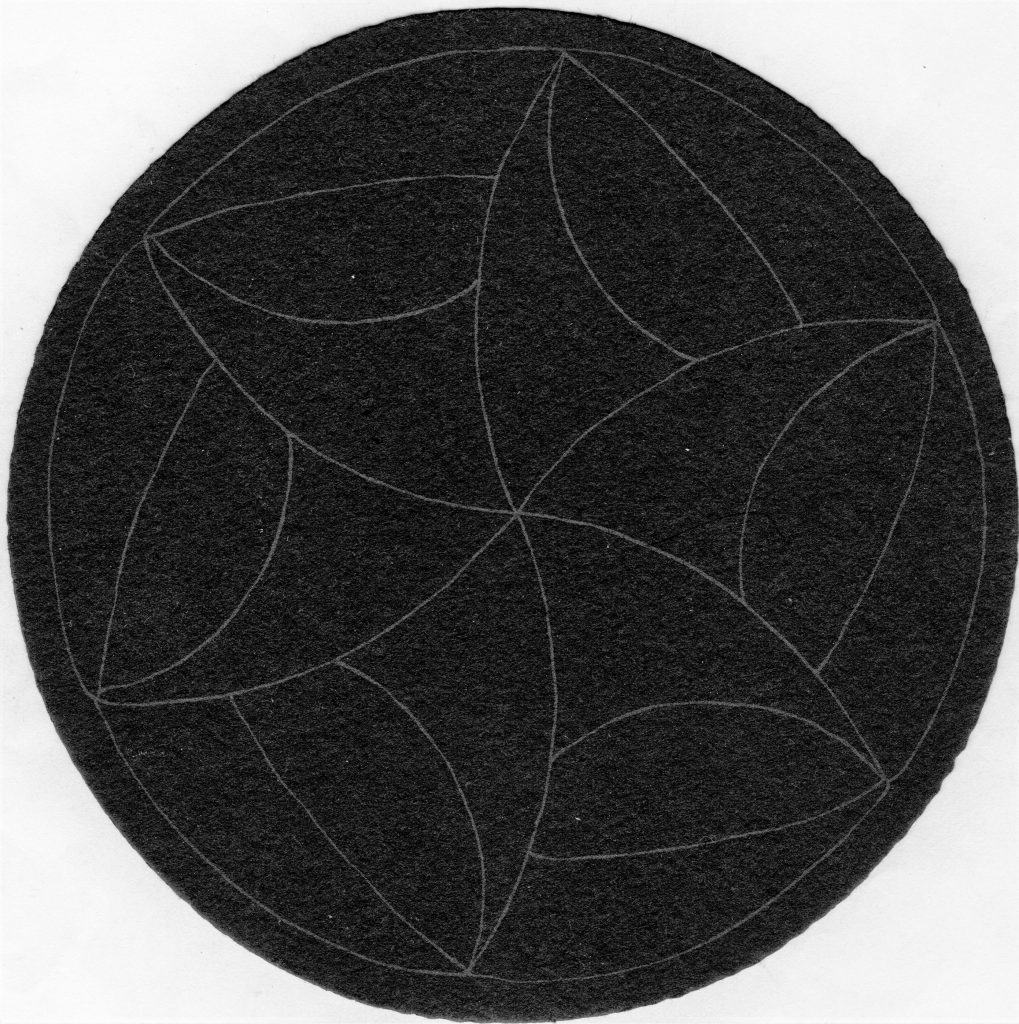 As you can see, I went with a black tile. I lightened the scan so that you could see the string.

I spent some time looking over the CPT journey pages over on pattern-collections. I got through about five of the pages and although I’m interested in it, I really only wanted some simple tangling today.

The reason I mention it though is because I think it is what gave me the ‘courage’ (for lack of a better word) to just start putting pen to paper.

I started by simply auraing the line on one section. 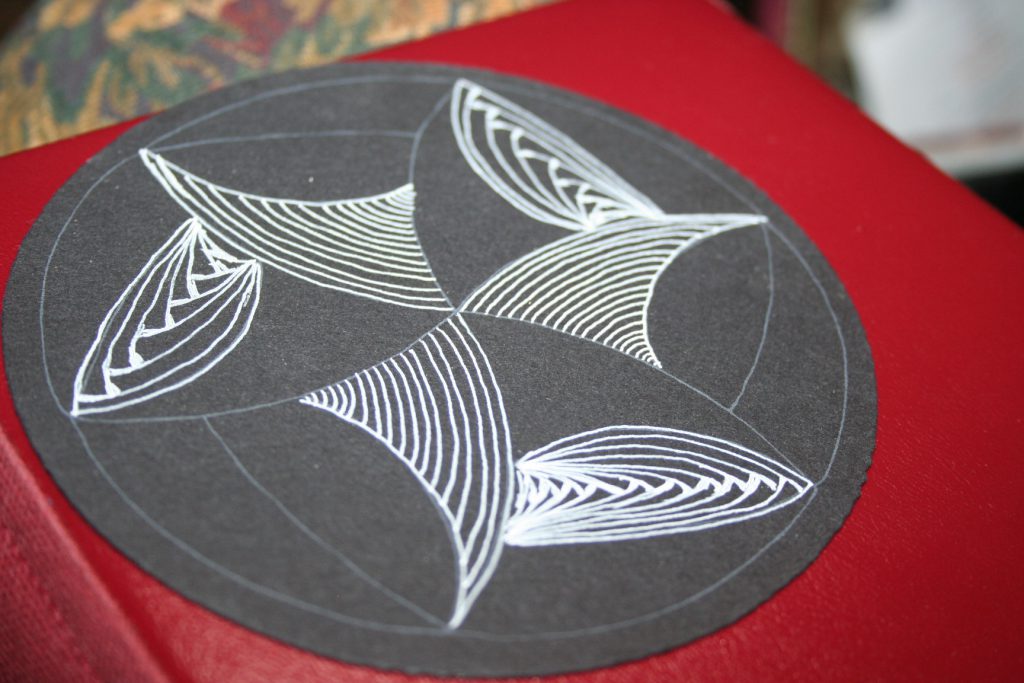 I didn’t want to commit to doing the same thing in all six of the similar sections, so I opted to make these same lines in every other section. Then I decided to do some Betweed in the ovalish top of the alternate sections.

After I finished that, I decided to draw more lines, but thicker coming down from the Betweed sections to the points. I’d used the 05 jelly roll for the thinner lines and went with the 10 for the thicker lines. 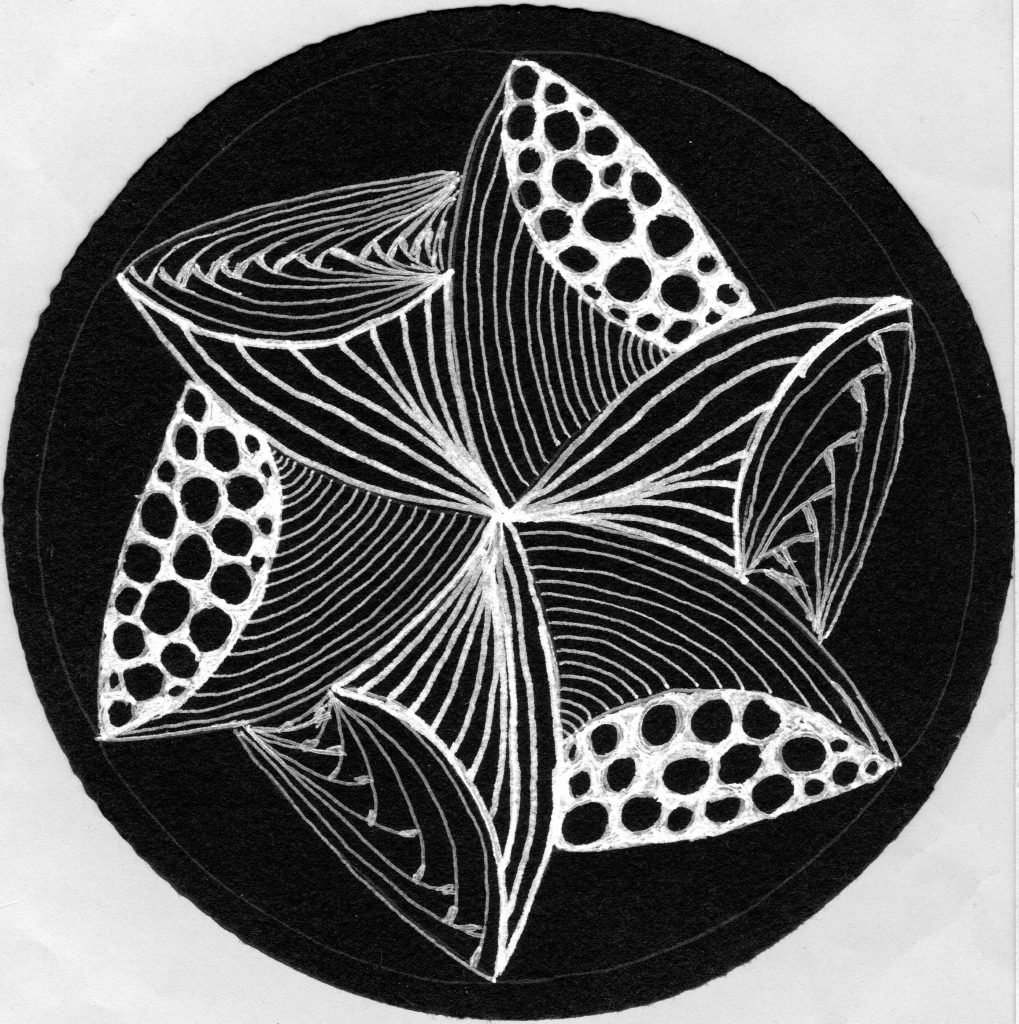 As you can see, I then drew some orbs in the remaining sections. I decided to fill in the background with white, so it looks more like holes than orbs.

Here’s the picture in natural light after I attempted to do a little shading. 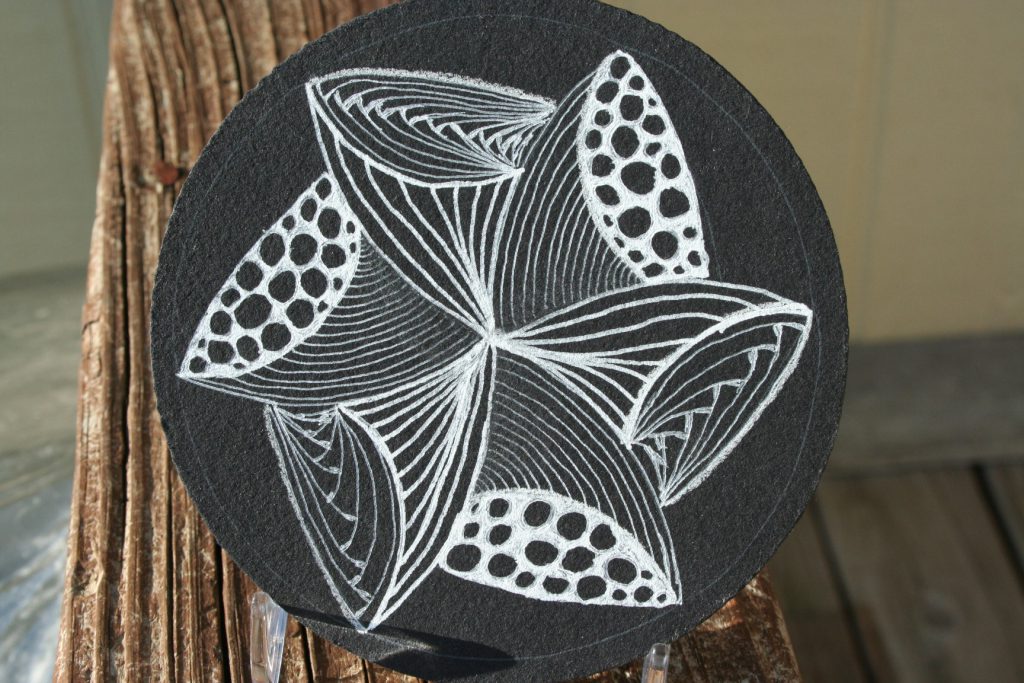 I put a little graphite along the line where the thin lines connected. I then added a bit of white charcoal pencil on a couple lines but other than that, I didn’t know what to do. So I just left it.

Here is the scan of the finished tile. It doesn’t look much different from the other. 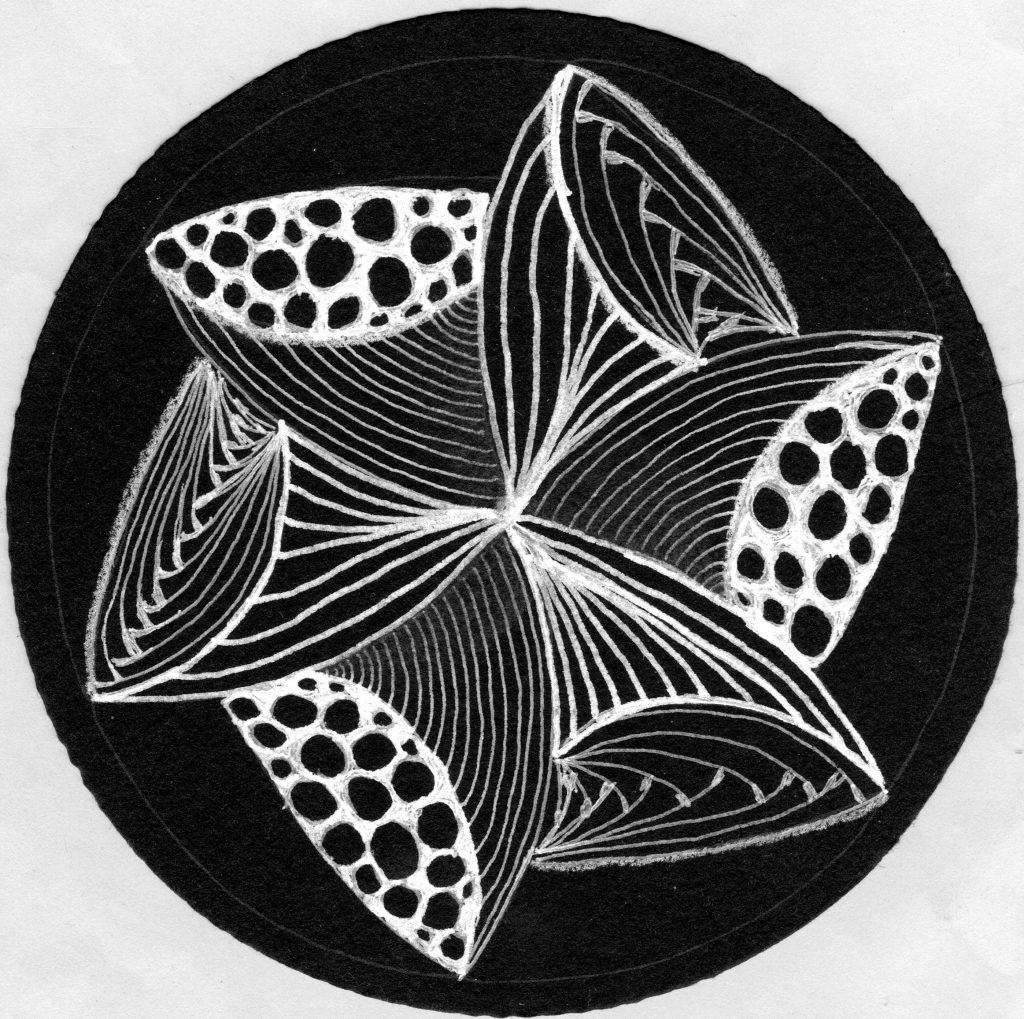 So, what would you suggest I do to add more dimension to this? I like it enough, but it just seems like it’s missing something. Actually I think it kind of looks like salmon and honeycomb in those ovalish sections.

Well, thank you for stopping by. I appreciate any advice you have for me on how to shade on black tiles.

This week’s diva challenge is to do a zendala and heart string. I think my approach is not very creative but it is what I imagined right away.

I’ve seen some lovely pieces on facebook lately using Verve by JJ LaBarbera. I have not used this tangle before but saw a lovely heart with Verve aligned sideways. It had lovely gold/bronze/brown tones and was just beautiful! Since seeing that, I’ve wanted to try my hand at Verve. So I didn’t even look at anything else this week; I just jumped in with hearts and Verve.

I stayed with just four hearts on my zendala tile. (For any visitors that are not familiar with the term zendala, it is what happens when Zentangle connects with a mandala. A mandala is a drawing that is round and is usually pretty symmetrical although not necessarily so.) This Zendala was done on an official Zentangle Zendala tile, which I believe is a circle with a four and a half inch diameter.

Here is what I had before shading. 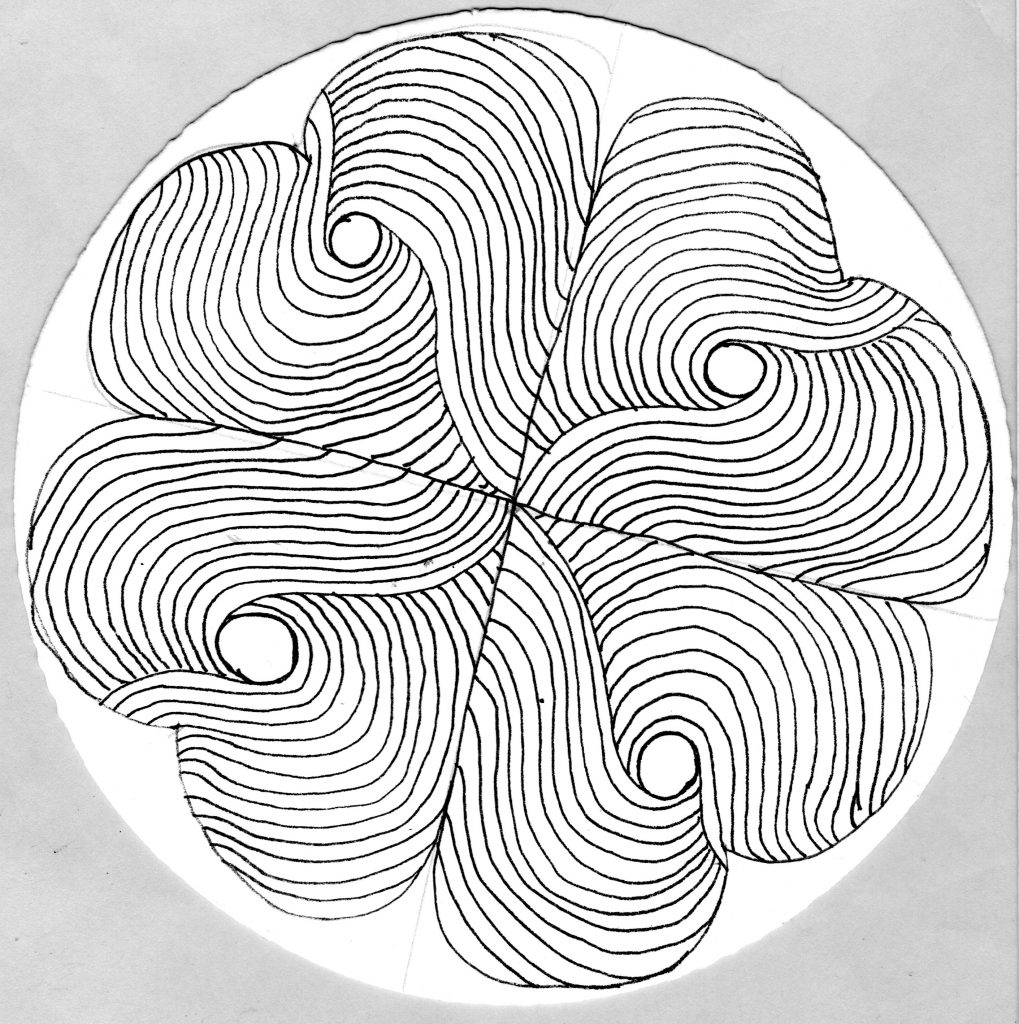 I was not fearless in my shading though.

I was afraid I’d get too much shading and it’d be too muddy looking. I haven’t done much tangling on official tiles lately, so I was surprised with how rough the paper was. Okay, it wasn’t actually rough, but just not smooth. I struggled to get enough contrast, so I used a #6B pencil in a few spots.

Also, when I was shading it, I focused on each heart shape individually, rotating my tile. So all of the circles had the shadow towards the center of the overall piece. After I was done and was looking it over, I–shhhh, don’t tell anybody–erased the crescent shading on three of the orbs and adjusted them so they were all in the lower portion of the orbs from one position.

And here it is after shading. 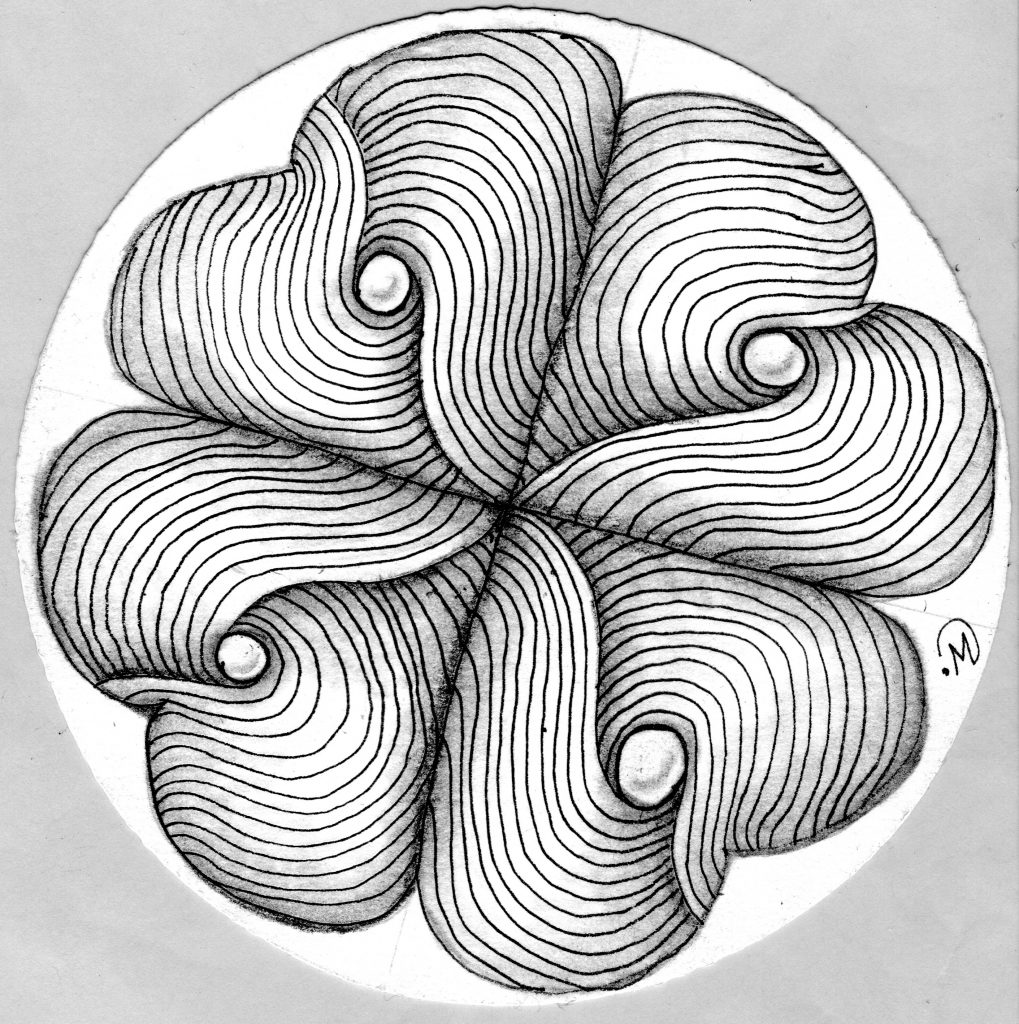 It always amazes me how much I shading I do and it still looks like hardly any at all. At least there is a noticeable difference between the shaded and unshaded versions.

Thanks for stopping by. I’d love it if you would leave a comment.

Have a great day!