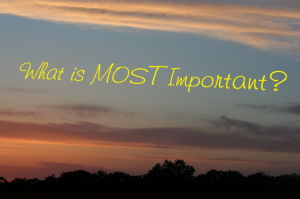 When we had our first child, we knew the most important thing was to raise him to love God and to follow after Him but beyond that, we just knew he needed to be able to be successful in this life.

Since we are products of the public school system, we didn’t really know anything other than the public school way. As I mentioned before when Brian, our eldest, was 4, we enrolled him in the private school of the church we attended. He loved it. BUT he only loved the fun and kids to play with; he did not care about letters, their names, or their sounds. By the end of the school year the other children were sounding out C-V-C words but Brian still didn’t care about letters or their sounds or really anything academic. Consequently the next year was going to be a struggle for him, so we made the decision to homeschool him. (Well, add to that the fact that the tuition for Kindergarten was nearly double the fee for pre-K.)

In the beginning I just thought educating my children was about academics but I came to realize that it was more about raising them to be the kind of people God wants them to be rather than just filling their heads with knowledge. Thus it brought me to a point where I had to consider what things were important to teach the children.

Of course, they needed to learn to read, write, and do arithmetic. They needed to be aware of the world around them, history, and how things work. Then I realized that learning about God, how to act, be and treat others were important too.

We decided that teaching the children about God and encouraging them to have a relationship with Him was our highest priority. When I was in my early teens, I didn’t really know what I believed; my religion was more about what I could and couldn’t do than what I believed. Thus I knew I wanted the children to know what they believed and why, including Biblical support for what they believed. If these were going to be our priorities then how would we have time to learn all the things that schools said needed to be learned?

Then I was introduced to some wonderful educational ideas that liberated me. Basically, educating children is NOT about filling their heads with knowledge like a bucket with water but more like teaching them HOW to learn, like igniting a fire inside them  with a thirst for knowledge. When I thought back to things I learned in school, especially about history or biology, I realized that I didn’t remember certain things I had been taught and passed on tests but that it didn’t matter because if I need that information, I know how to find what I need. Thus teaching my children how to learn became a priority as well.

With all these as our priorities in educating our children, I realized that our “school” day was not reflecting these priorities and thus we needed to change how we did things.

My admonishment is to think about what is important to you. What do you want your children to value? Are you teaching these things to them? How? Are you modeling what you believe to be important or just telling them? Children follow what they see far more frequently than what they are told.