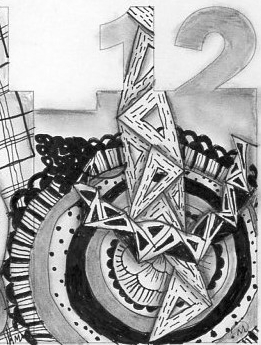 Not too long ago I tangled in my calendar; I’ve gotten out of the habit of tangling every day in it, unfortunately. On this particular day I was working on ING and not being very successful at it. Odds are I will end up loving this tangle, as that is what seems to happen with tangles that I struggle with at first.

Any way, I started with the big ING (the triangle pattern in the middle and up the 1) and then added the ING chain across it. Thoroughly disliking what I had so far, I thought I’d add something behind it, thus the big target thingy. I wasn’t thrilled with what I had and kept adding to it until I even went over into the empty space to the left. (I did tell you I hadn’t drawn in my calendar for a while.) Then as I was nearing the end, I made a mistake, thus the oddly placed Bronx Cheer (raspberry shape at the upper left). I finally just called it quits and went on and decided to draw a big Mooka in the previous space (day 11). 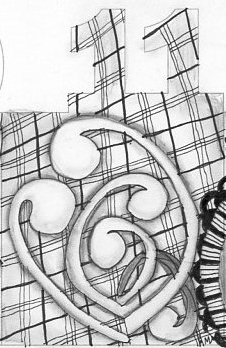 I’d seen some other Mooka recently and thought I’d revisit this tangle (another one that I didn’t do very well in the beginning). In the past, I haven’t put big enough balls at the top of each upward stroke, so I was deliberately focusing on that this time and mostly, I like the results. I had seen the “plaid” pattern (MacDee) on The Diva Challenge one week but had not used it yet and thought it would be a great background here. It isn’t perfect but I like the results well enough, in spite of the messy final bit of mooka and shaky lines in macdee.

Then I went on the the last space on the left of the calendar page and just started drawing leaf shapes. I don’t even know if they are an official tangle (not official as in Official Zentangle Tangle but official as in someone has named it and created step-outs) or not; I can only imagine they are. 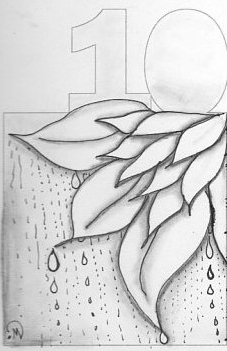 I filled in the background with Msst and added some teardrop/raindrop shapes – again, I have no idea if this is a “pattern” or not, I just drew it.

These last two are excellent examples of the importance of shading, as I believe it really makes them pop.

Here they are all together, as in the calendar. 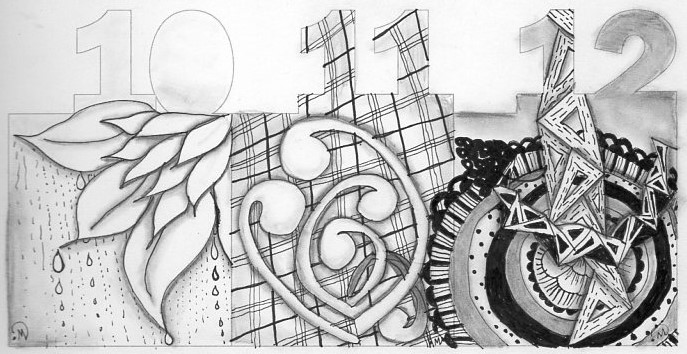 And I still didn’t like that first one (on 12) until I was showing it to Lauren, my daughter-in-love. I turned it upside down to show it to her, as she was sitting across from me and this is what I saw. 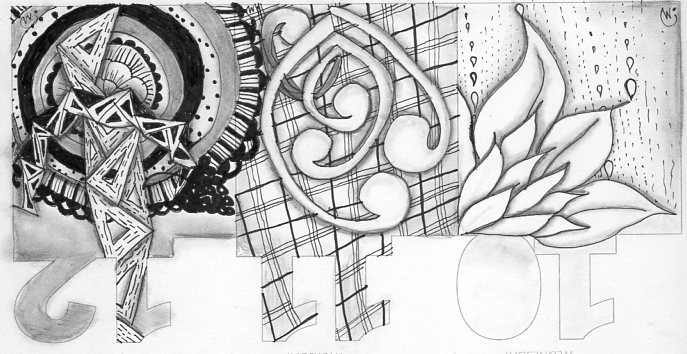 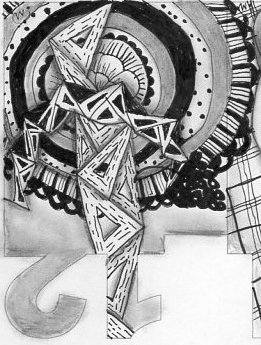 All of a sudden, I saw some creature, be it bird, scarecrow or what, carrying the berry, and I didn’t dislike so much. That is when I realized the importance of turning your tile and viewing it from different perspectives. I guess the same thing could be said for things that happen in life; if we take the time to view it from a different angle, we just might find something worthwhile in even the worst situations.

That’s all for today so, until next time, God bless,