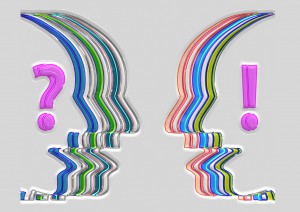 There is a subject that when I bring it up with Mike, he gets uncharacteristically defensive/offensive; it’s odd really. I thought enough time had gone by that I could casually talk about the subject but when I did, he once again got ruffled. He was adamant about his viewpoint and it seems he somehow thought I was against him or disagreeing with what how he wanted to handle things.

Like many discussions, it bunny-trailed into other subjects. It was starting to get uncomfortable. I knew we had entered a point where I just needed to back of and assure him that we are one. I went over to him, took his hand, and gently told him that I know Adam was placed over Eve because she was deceived and that God had him over me to keep me from being deceived as well. I then told him that I trusted him.

Nothing and no one is worth causing division in our marriage. We are united. I may have differing opinions but we are united. I trust my husband. He loves God and has a good relationship with Him. I trust him to protect me from deception the way God intended it.

I think my actions supported my marriage rather degrading it. That is what is important. I once again learned the importance of keeping myself controlled and not getting passionate about things I’m talking about – at least, not to the point of losing my self-control.

It’s a growing and learning thing. You would think after twenty-eight years that I would have it down and not really continuing to do this but better late than never.

I hope you are building up your marriage rather than tearing it down.