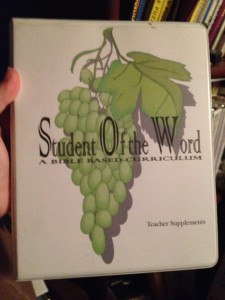 I talked about how I found SOW and some generalities of it. Today I want to share a little more in depth.

Discipleship is a key element of SOW. It is about the Bible and letting the Bible interpret the Bible, first and foremost. It is okay to use Bible helps like commentaries and handbooks after first trying to glean what the Bible is saying on its own. Use of a concordance and dictionary is a must.

Another big element of SOW is charts and such for getting things organized from schedules and chores to goals. This is one of the areas that really freed me and kept me from getting burnt out. David and Merle Reese are the authors of this wonderful program. They used more of a “year round” schedule. In the beginning I used her ideas of four weeks of studies and then a week to catch-up in our basic school months schedule but ended our homeschool following the “year round” version, taking months off as we desired or needed.

Another major element of SOW is its flexibility! I don’t think we used SOW exactly the same way any two of the 15 years we used it. WOW! It is hard to believe we used it that long but we did. We started in August of 2000 and Tiffany finished in April of 2015. The flexibility is not just in the schedule. It is also in the resources and how much of SOW you want to use.

The bulk of the curriculum is Bible based, i.e. centered around the Bible. There is a portion of Scripture that is the focus of the week. In that passage there will be a key scripture verse (ksv) that will be used throughout the week for memorization, dictation, copywork, language arts, spelling, and study. Throughout the week, study is done on this passage by means of an outline, the setting, vocabulary, a given topic, a given character, and ending the week with a commentary noting what was learned from the passage and how to apply it to their lives. That’s a lot of Bible study! They learn the Bible, what they believe, and why.

There is literature, short stories, poetry, and articles suggested for literary study. There are topics and activities suggested for science, history, and geography. These three subjects are rotated throughout the year. There are also ideas given for Creative Writing, as well as electives. As you can see, SOW really is a comprehensive curriculum.

In the years since I first purchased my version of SOW, there have been some substantial revisions. Worksheets were first integrated in my version of SOW but I believe many more were created for varying ages in successive versions.

Using SOW as a complete curriculum is very economical, even though rather pricey in the beginning, though not really compared to other curricula. The first year you get the Resource Edition (RE) and Teacher Edition (TE). The RE has much information about the overall setup and organization of your day and year. The TE has the information on the actual week to week lessons.

SOW is set up with two 12-week semesters. This comes to 24 weeks. My state requires 36 weeks of schooling in a year, so adding a week after every 4th week will add another 6 weeks to the 24 weeks of lessons. That comes to 30 and leaves only another 6 weeks that can be used for more catch-up weeks or weeks for further study of either subjects they already studied or ones they would like to study.

When I purchased my version of SOW, there was a bit of a learning curve for me to figure out how everything worked together. I cannot say how things have changed throughout the years because once I learned how things worked together I did not feel the need to upgrade because I go with the idea that if it isn’t broken don’t try to fix it. I already had things flowing smoothly and did not feel the need to upgrade (or spend any more money on it).

Bottom line . . . I loved using The Student of the Word.

Oh! One thing I forgot to mention: It is recommended that the parent(s) do at least the Bible portion of the curriculum so that they can discuss the passages and studies with them. Thus more of the discipleship aspect of the program.

If you have ANY questions about SOW, don’t hesitate to let me know and I’ll be glad to help you.

5 thoughts on “The Student of the Word part 2”