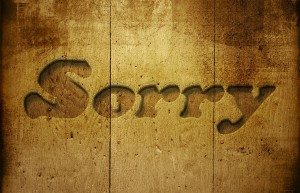 In this marriage walk, I have found how important it is to realize when I am wrong or when I have acted in an unkind or unloving way.

It seems I am frequently given opportunities to have something to share with you from my experiences.

Yesterday I had a situation arise where I said something that Mike took negatively. It was clear that I offended him. This was NOT what I had intended at all!

My purpose behind asking him what I did was because I had just seen something online and thought about making him a special lunch today. Unfortunately, wherever his mind was at the time, the way I approached the subject upset him.

Now I will admit that I continued the conversation a little longer than what I should have but I did quickly realize it within a few minutes or less that things were not going anywhere good. I also knew that the situation arose from what I had said. So, the logical thing to do was to apologize, which I did right away.

Now, I will also admit that it probably wasn’t done in the best way but I did say I was sorry. And then I did the hard thing and just shut my mouth. A while later, Mike found it within himself to apologize for his part in the situation.

I openly accepted his apology and forgave him. Shortly thereafter, the atmosphere was back to normal.

Without being quick to apologize this situation could have escalated to a really bad fight! There is great power in seeking forgiveness and it is a great blessing to a marriage. Consider what power a proper apology and acceptance with forgiveness can do in your own marriage.