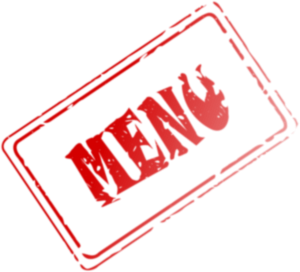 So this week I thought it’d be a great time to talk about how I use a menu. You see, for the first, maybe ten years? of our marriage I flew by the seat of my pants when it came to meals. It was always about what I felt like making or eating, mostly eating. I went grocery shopping when I got very low on food or could no longer throw together something from what I had available.

Of course that usually included eating delivery several times each month because I did not feel like fixing anything or eating what we had available. We generally ate out after church on Sundays and then usually had pizza delivered at least once during the week.

About twenty years ago, we’d moved to a new state and being self-employed, it was like Michael was just starting his business all over again . . . well, that is exactly what he was doing, only this time without the referrals he’d had the first time. It was definitely a difficult time for us.

My dear friend and neighbor, Joyce, taught me about looking at sale papers and making a menu based on them. Of course, when money is tight, you don’t veer very much from the menu because there isn’t really much else available.

As time passed, Michael’s business grew and things weren’t so tight but I still made menus because it made it easier to have some idea of what to have for dinner. You see, a menu enables you to think about dinner once and then each day is easier because you don’t have to wrack your brain to come up with an idea when you are hungry and have people depending on you for dinner.

For many years now, my menu has become a list of suggestions. I buy the ingredients necessary to make the things on the menu but sometimes I just don’t want anything I have planned.

For example, it may be eighty-some degrees out and thus I don’t feel like having soup. Or making Light and Luscious Enchilada Casserole sounded like a good idea because I really like that meal but it I have to make two recipes before I can assemble the casserole and I’m just not up to all that. So, I either switch gears and make something from another night or fly by the seat of my pants and come up with something completely different.

This past week this is what I had on the menu:

We did end up eating the Quinoa on a different day. Still haven’t had the second or third ones. The squash recipe got eaten before the week even started, since I had the ingredients already on hand. We subbed in BBQ ribs and baked thighs for the other two nights, from stuff I had in the freezer.

We did have the zuppa and roast and even on the days I listed. Mostly because I put a lot of thought into the meals for those days because we were going to be busy and/or cold. But come Saturday, I didn’t feel like making the listed thing and we ended up having tacos. We haven’t had tacos in ages and it was delicious.

So you can see how I used the menu as a guideline but changed as the need or desire arose. When there is a good deal on meat, I stock up and work it into a future menu.