Well, I didn’t get the craft room finished last week, so I kept working on it this week. The plan was to get it finished by Monday night and play stash and dash on Tuesday but I couldn’t bring myself to doing that. So I kept at it Tuesday and even some on Wednesday.

Oh my! It looks soooo much better even though I had to throw a bunch of stuff into a big box to sort through and find homes for in a couple of weeks. (Maybe I’ll feel motivated enough to go get a few pictures but it won’t be the same without seeing the embarrassment it was before.

Okay, so I decided I could muster up the strength to go in and take a few pictures. These shelves were stuffed to the gills with not really any rhyme or reason to how they were stuffed. Just simply, put this stuff somewhere. 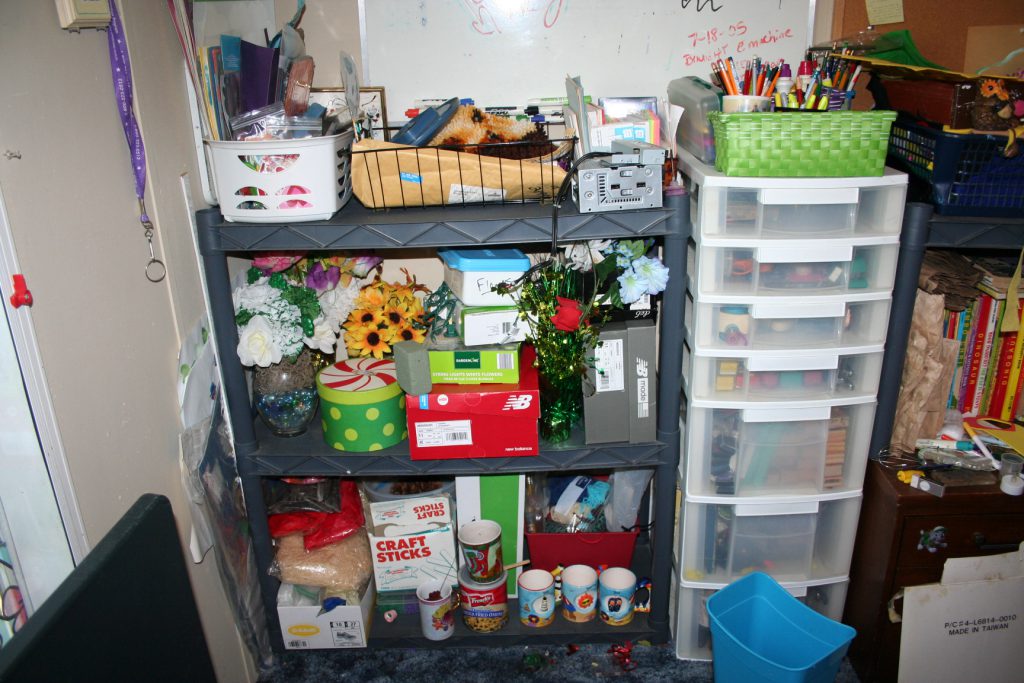 I like to buy cheap fake flowers at Dollar Tree and make arrangements for the table. There are flowers stored in several of those boxes and some lights we like to put up in the kitchen/living room for times not covered by the fall and winter ones we have in the holiday boxes in the shed.

Those drawers were a shambles and I emptied every one of them and resorted them. There is now only one drawer that is not as I would like it but I had to stash some things in there the other day to just be done.

This is the box where a lot of things went that I’m not ready to deal with and will take a while to sort through . . . not this week. 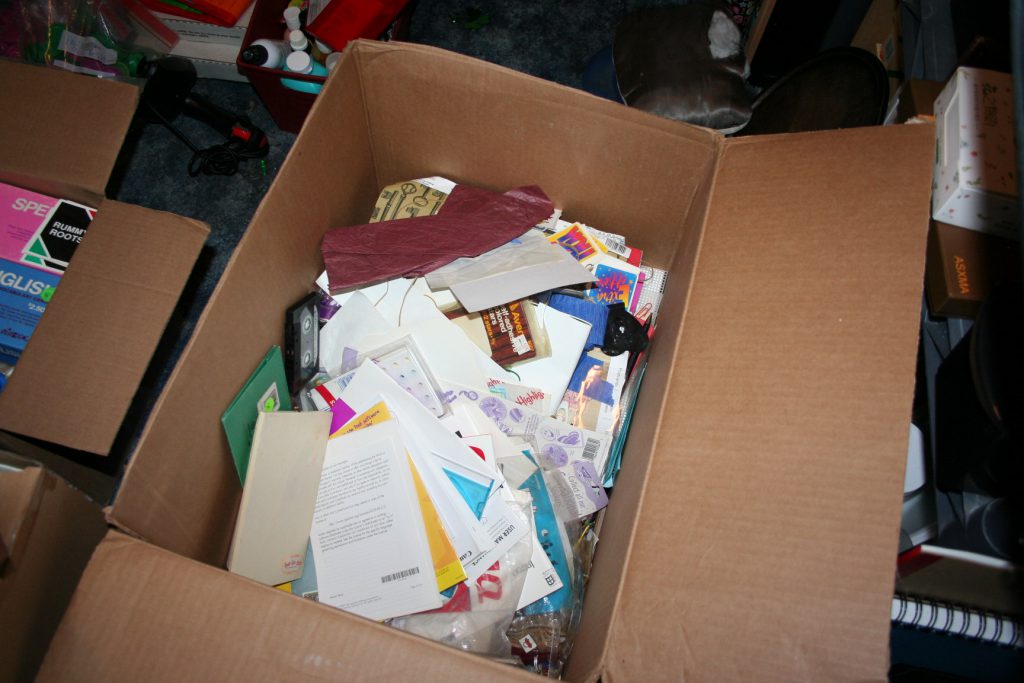 I started cleaning these next shelves earlier this year. The bottom two surrendered more easily but the top two were done this week. 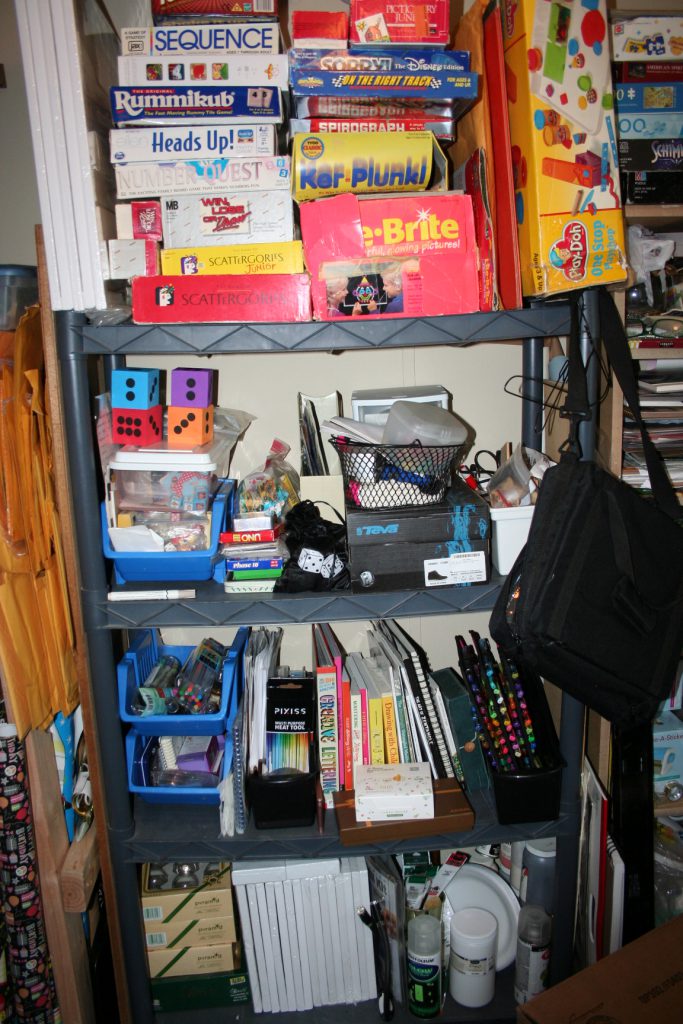 There are painting supplies on the bottom shelf. The next shelf up holds my inks, calligraphy pens, other pens, embosser, and books on zentangle and typography.

The shelf above that has some game stuff on it but it now also houses some pouring art supplies and some wood burning supplies, as well as a basked that I have yet to clean out.

Believe it or not, the games on the top shelf have been culled quite nicely.

I’ve kept some of my kids games so that as Liam is ready, we can play them together (as well as any other grandchildren I am blessed with in the future).

We also culled the puzzles a little bit. I figured we’d put them together and then decide if we want to do it again. I’ve got a fun one to do this coming week with Stephanie that has Mickey Mouse on it. 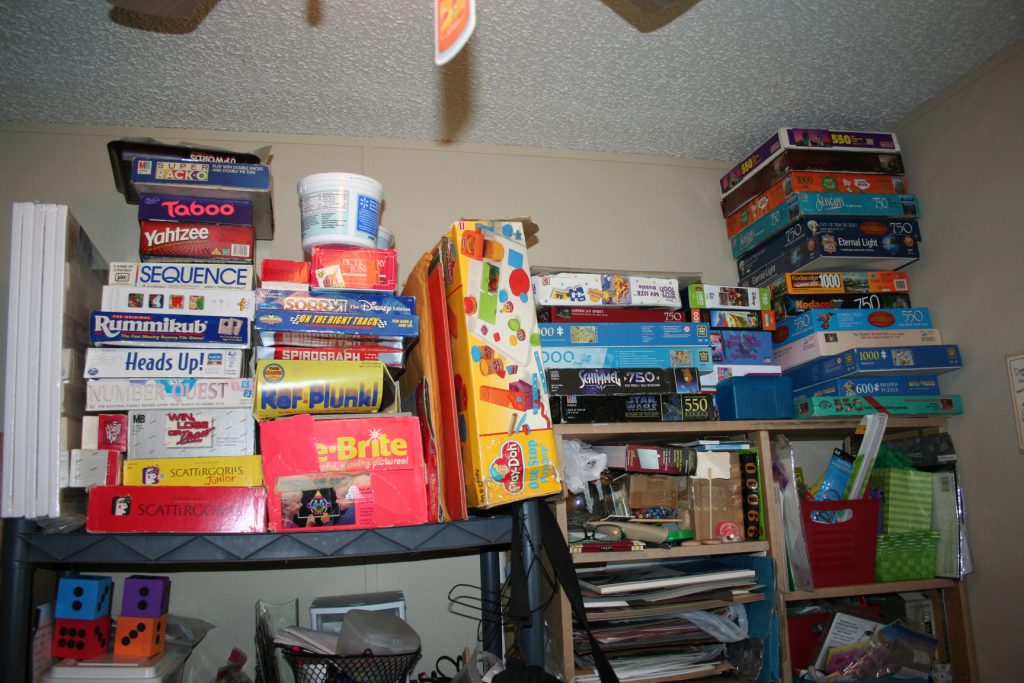 I’ve also done quite a bit of culling in the servants’ quarters. 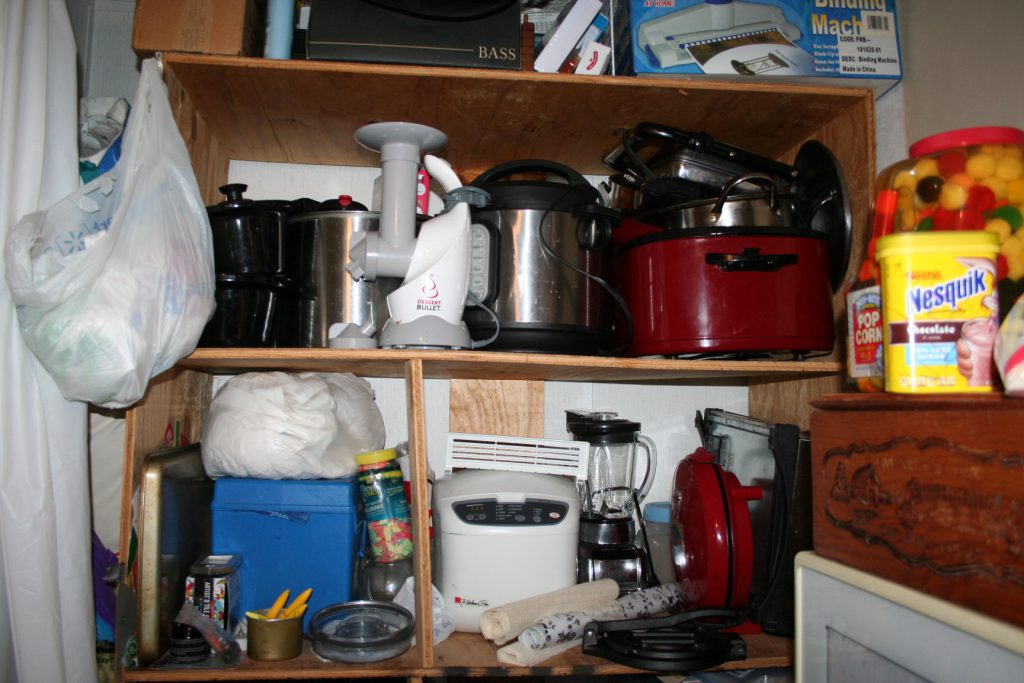 I actually have some space here now. Of course, the ice cream machine needs to come back in here from the kitchen floor.

It’s a work in progress.

Thursday we started cleaning the Library in earnest. Tiffany and Michael had done some a few weeks ago but it hasn’t been touched much since. This is the room our company will stay in, so it is imperative that we get it cleaned up!

Unfortunately part of that cleaning process was moving a bookcase and way too many books for one unit. Since I’m done with my homeschool adventure I no longer need the school books I once used but information does not have an expiration date on it, so I’m letting the kids decide what they want to keep and what they want to get rid of. We are boxing up all the ones they want to keep and storing them elsewhere and bagging up others and taking them to Gardner’s Used Book Store. Any that are curricula I may take them to Bibliomania. 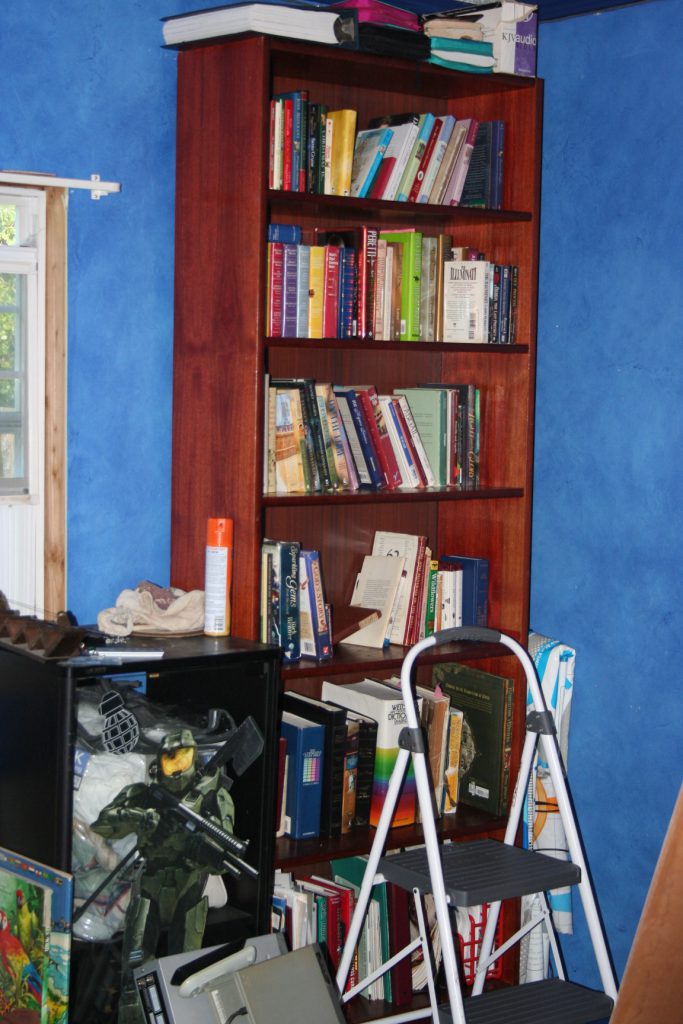 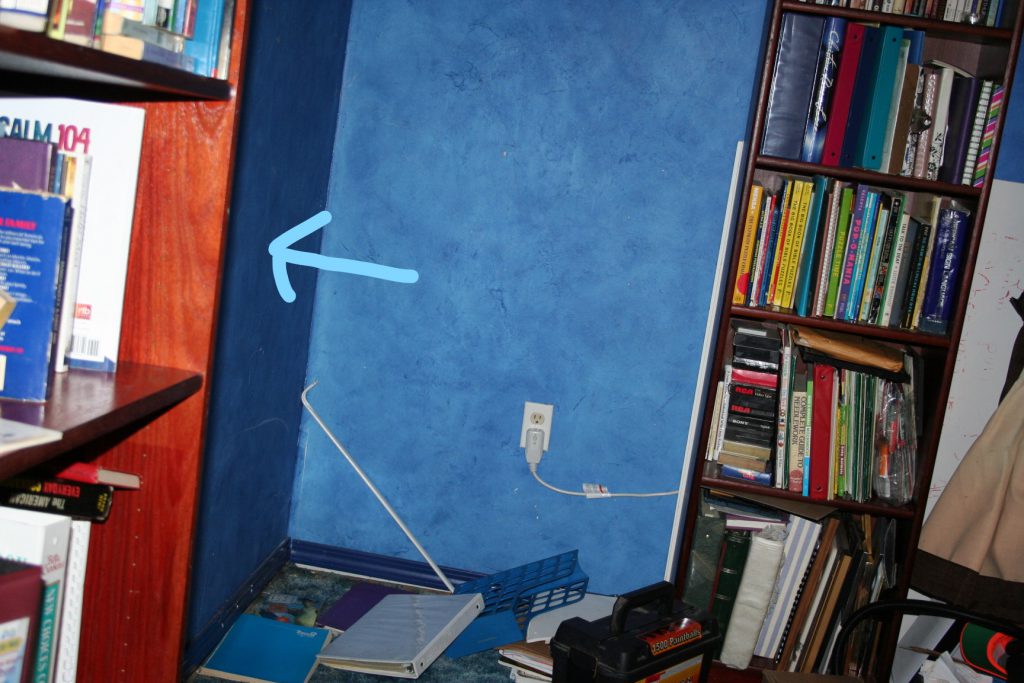 As you can see, there’s still a bit of cleaning to be done in here.

Well, today is a BIG cleaning day. Tiffany and I have a plan of attack written down. We will work for 30 minutes and then take a 10 minute break and then on to the next area. If we stay on track, we should be done and taking a nice rest by 2 this afternoon. Pray for us!

Oh! Although I didn’t get any pictures from the water park, we had a good time. It was a lovely, sunny day and nobody got too burnt.

I did get a bit sun-kissed and put a shirt on the last 20 minutes or so but it was a good time and no skin peeled in the end.

Well, that’s it for me today. I have lots to do and am looking forward to seeing our friends tomorrow!

PS. I guess I should clear this up: We added two rooms onto our house about twelve years ago. In so doing, that gave us one small room to get book shelves out of the hallway and living room and out of my bedroom. Then when Brian moved out about eight years ago, we were able to move the books out of the one room and put them into another, giving me space to put up other shelves and store things a little less congested. As my artistic endeavors have increased, so have the supplies needed. Although, the need for some of the old supplies (think kids crafts, like pom poms

) have diminished. This is also the room where I store bulky kitchen helps that are not used as frequently as others.