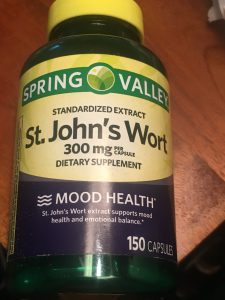 Recently I was enlightened to the fact that when the kids were younger I was a bit uptight and frequently spoke harshly.

So I’m writing this today to save others from going down the same path that I did.

I didn’t think there was anything wrong with me. I thought other people were just touchy. But Tiffany lovingly let me know the truth as she remembered it. It hurt but was needful so that I can help others.

I started taking St. John’s Wort for some bumps on my hands. After a while, I stopped taking it because it didn’t seem to be making a difference for my intended purpose but I noticed that I started getting frustrated more. Then I was smart and read the bottle which stated that it was a for mood health and realized that it was helping me in other ways.

I have been taking it every night for quite a while now, years now. A few months ago I decided that I was going to cut way back on the supplements I was taking and out went the St. John’s Wort; I didn’t think I needed it anymore. HA!

After a few weeks, I think that it takes about that long for it to get completely out of your system, I began having those old feelings of frustration again. I decided to start taking the St. John’s Wort again and don’t plan on removing it again. It helps me be more chill.

So, I’m just sharing my experience and recommend that you do some research, talk to someone you trust about herbal supplements be it a natural doctor, chiropractor, or other knowledgeable person.

2 thoughts on “Supplements to the Rescue”