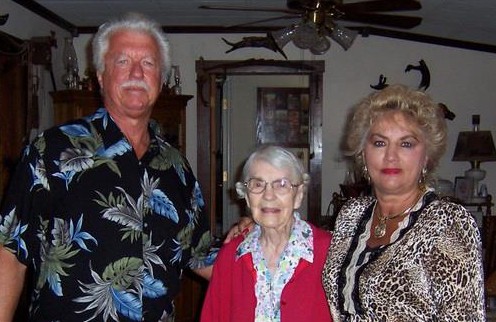 This past Christmas I gave my dad a “gift certificate” for the “Quarterly Dessert Club.”

Dad had a hard time making a Christmas list last year, so this was my solution, since there are certain desserts that he really enjoys but doesn’t get very often.

A few weeks ago I took him the first installment. I decided to bring him this Sunday Pudding because it was his mom’s recipe and the only time we got it was when she brought it over. Then nineteen years ago we moved about 1200 miles from her and unless one of us made it, we weren’t getting it.

My sister Sondra, who is two and a half years younger than I am, attempted to make it a few times through the years. We enjoyed the attempts, even when it separated into layers.

Then we lost the recipe for a while. I looked all over the internet but never found what I thought was the one.

One day, I really really wanted that recipe, so I prayed and asked God to help my mom find it. I commissioned the angels to put it in a place where she couldn’t miss it. Not too long after that Mom went into the spare room to play her keyboard and right there on top of everything was this recipe! Thank you God!

The recipe was a bit difficult for me to decipher the first time I made it.  The first several times I made this I made a triple or quadruple recipe because I took it to my parents’ on family day. I learned to make it before four in the afternoon when I made that much, so that it would have time to set and mix properly before going to bed that night.

Start by heating one 12 ounce can of evaporated milk, 1/2 cup water, and 1/4 teaspoon nutmeg in a double boiler. If you don’t have a double boiler, you can use a bowl and pan, with the bowl acting as your double boiler pot. 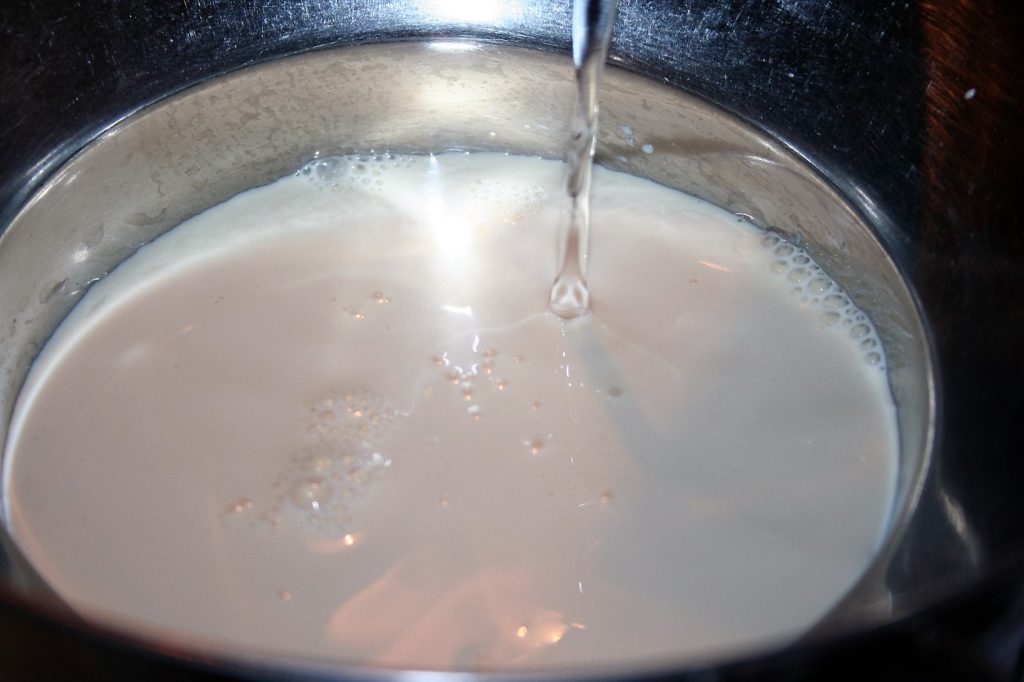 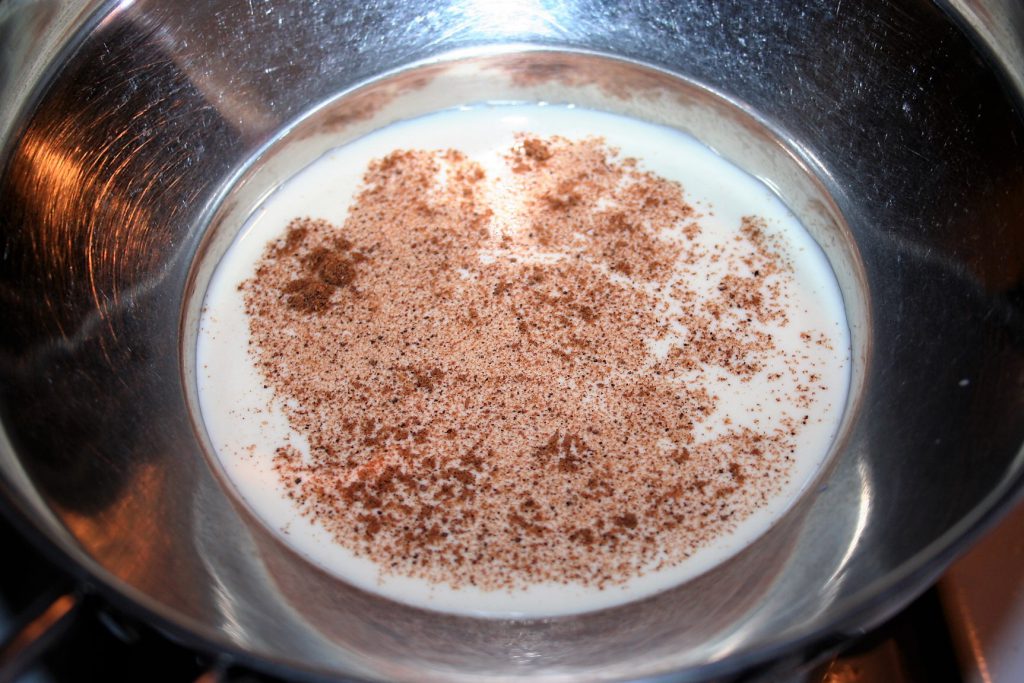 I use a whisk to combine the nutmeg into the water and milk but it really doesn’t combine well for a while. 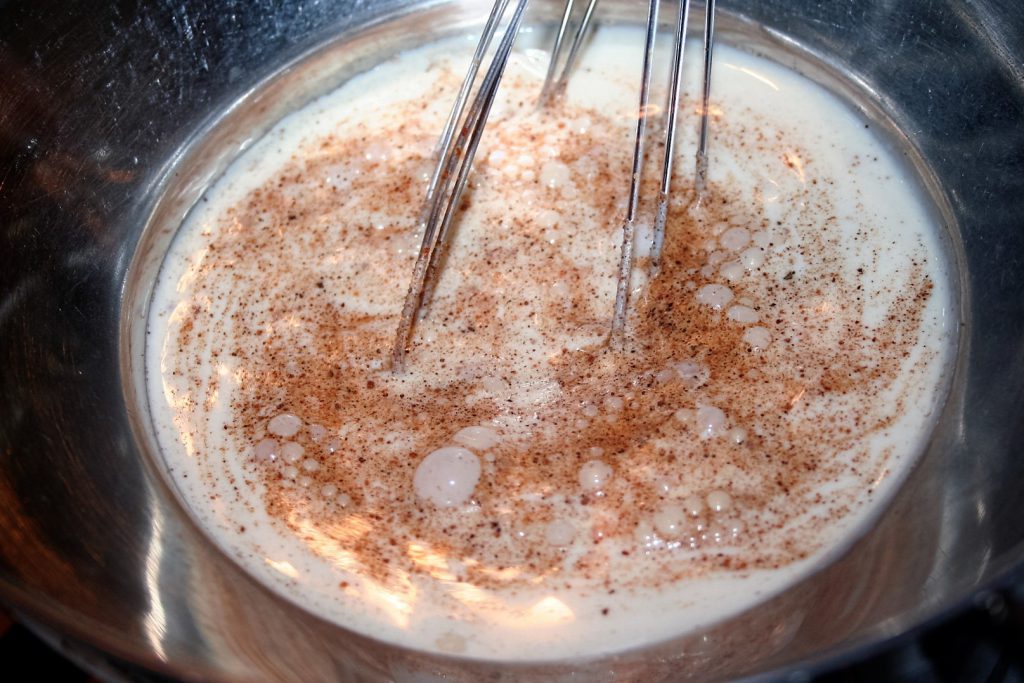 While the water is coming to a simmer, it is safe to prepare the eggs.  Separate the yolks from the whites of three eggs. Keep the whites for later.

Place the three yolks, 1/2 cup of sugar, and 1/8 teaspoon salt in mixing bowl and beat until light. 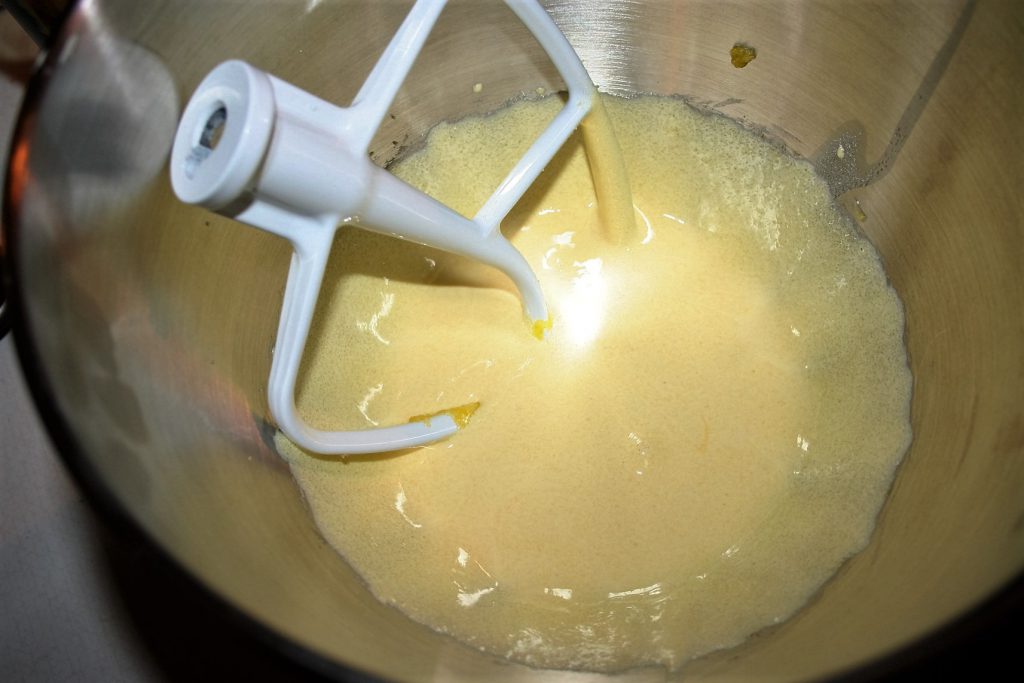 Meanwhile, keep checking that milk and making sure it doesn’t scorch. 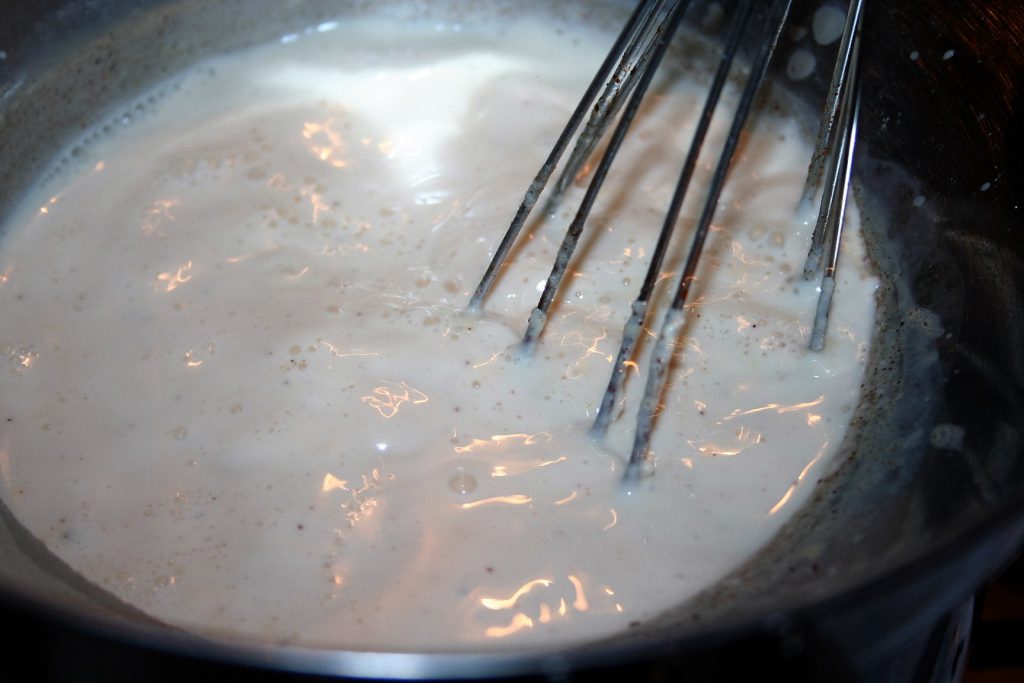 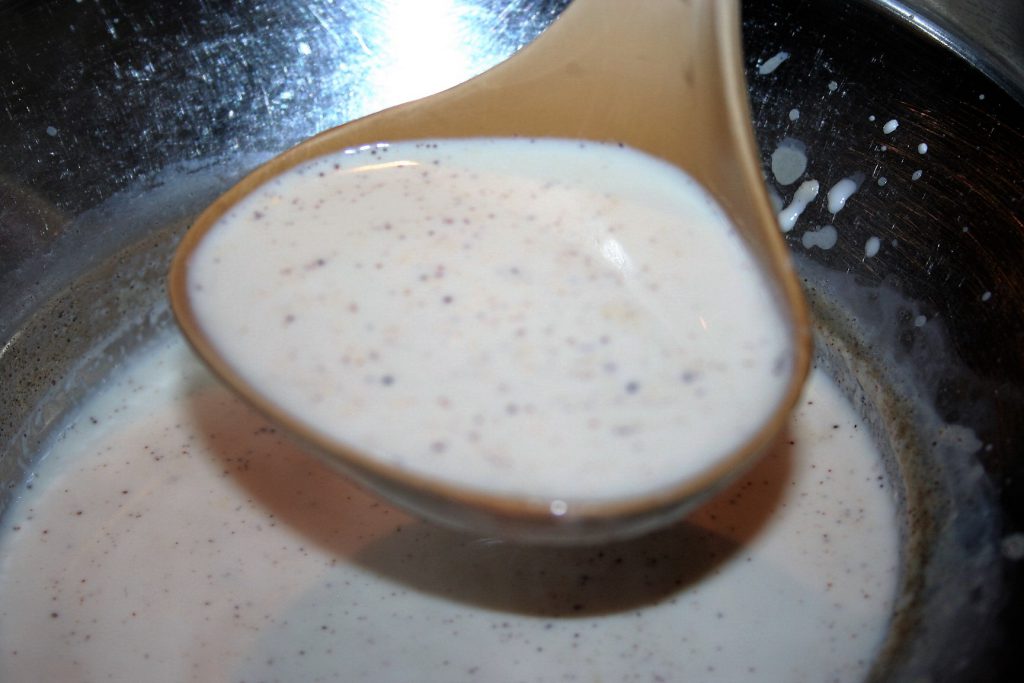 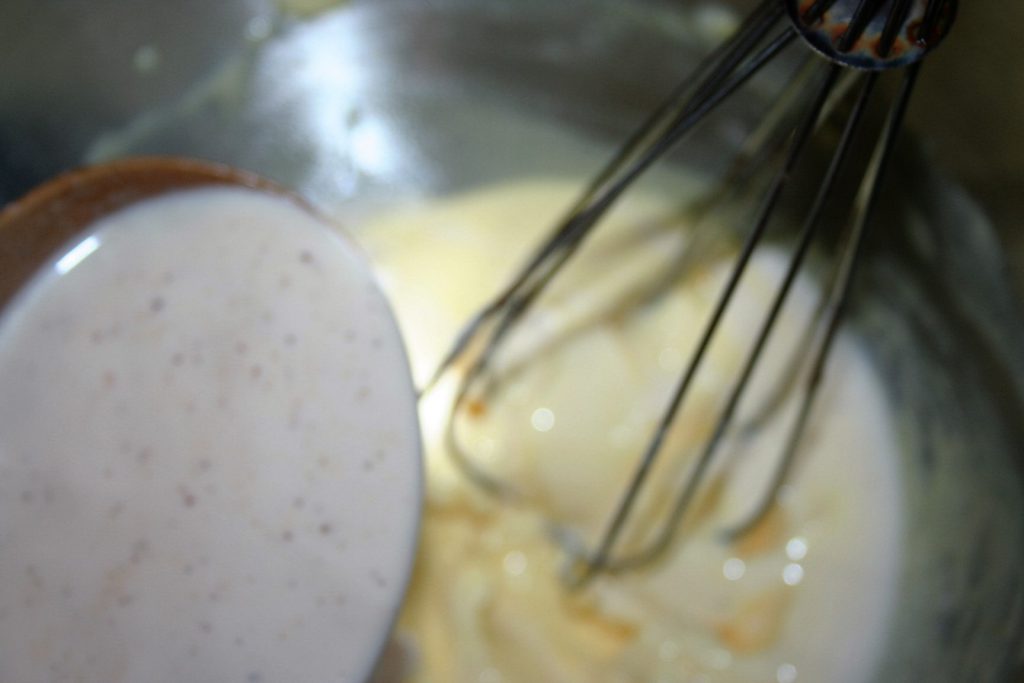 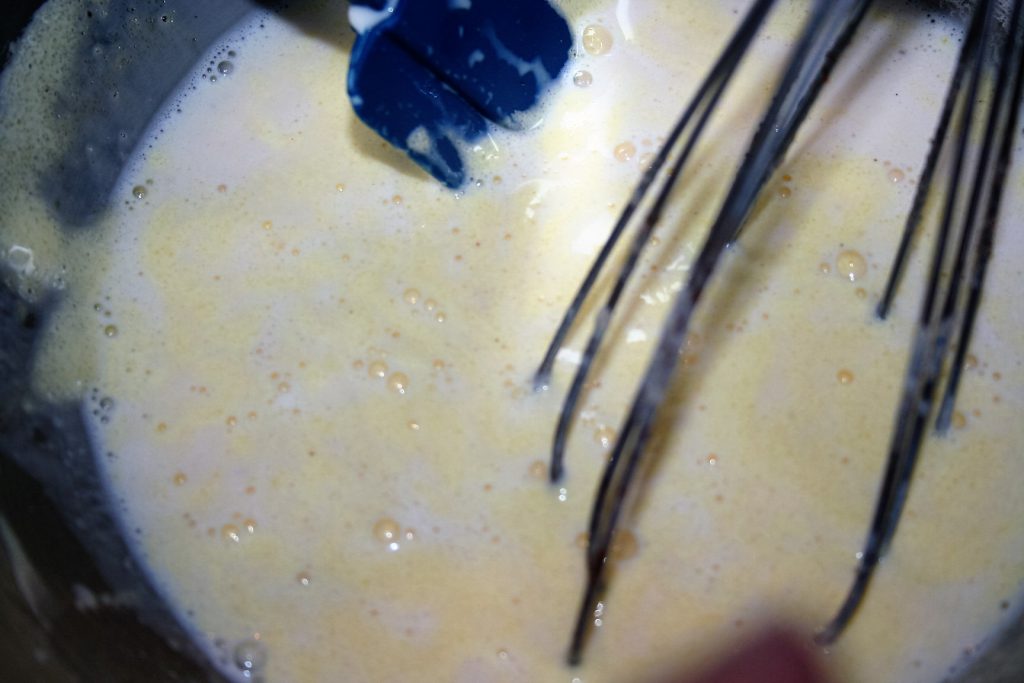 Keep stirring and cooking until thickened.

Meanwhile, put one envelope, 1 tablespoon, of unflavored gelatin (Knox is one brand),  in a small bowl with 3 tablespoons water to soften the gelatin. 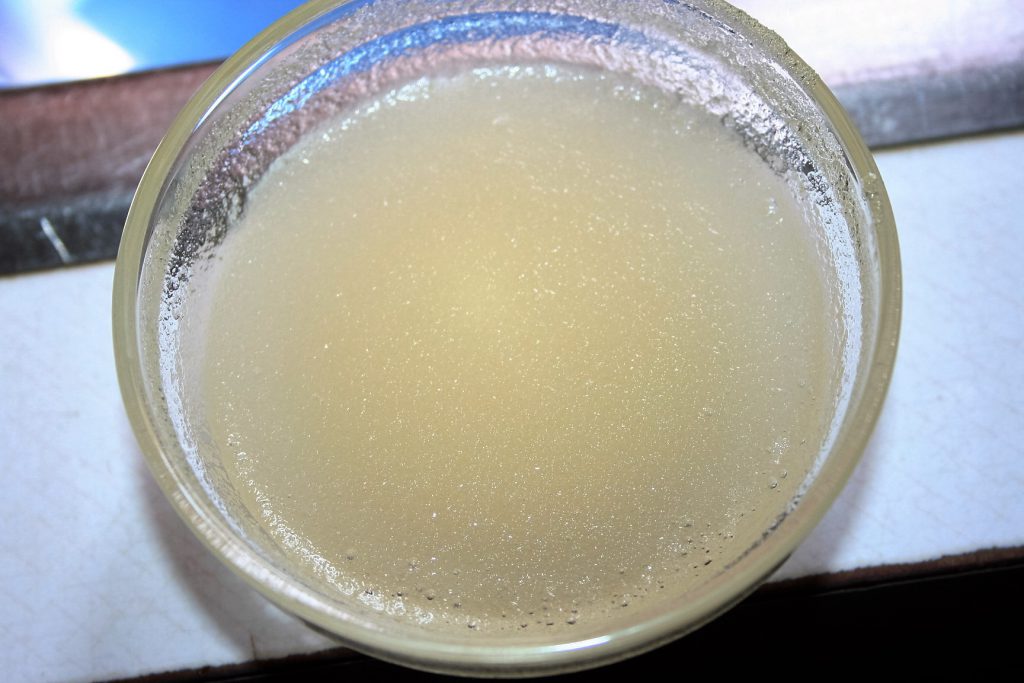 Keep stirring milk and egg mixture until thickened. See how thick it is on the upper edge of the pudding and on the spatula. It isn’t much but it is thicker. 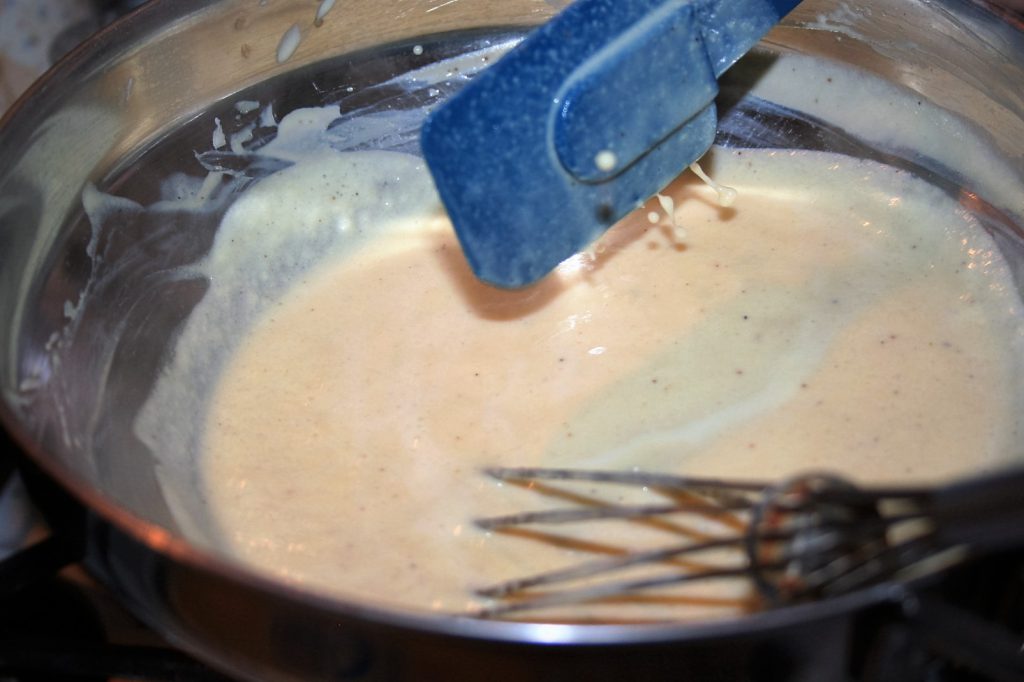 Now it’s ready for the next step. 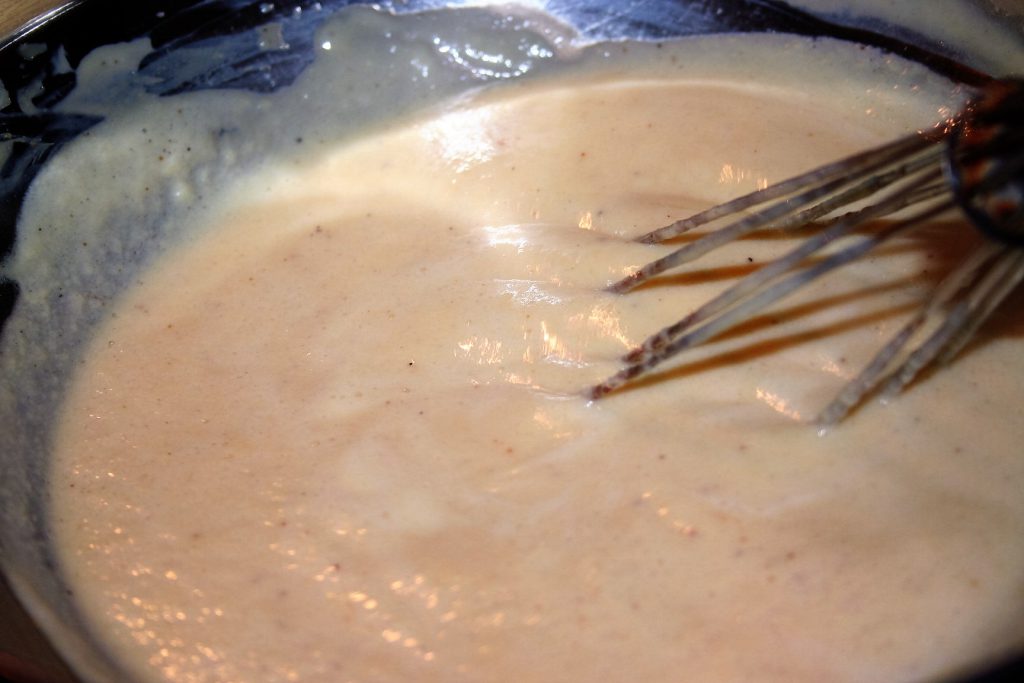 Remove the pans from the heat, turn off the burner. 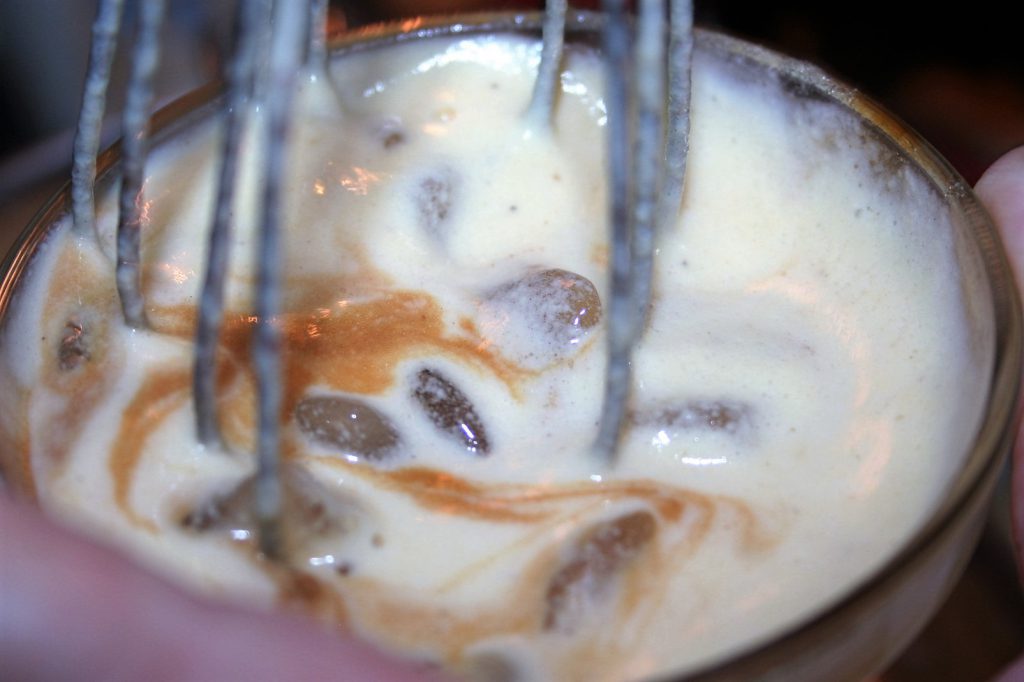 Add this gelatin, water, vanilla mixture to the pudding in the double boiler and combine thoroughly. 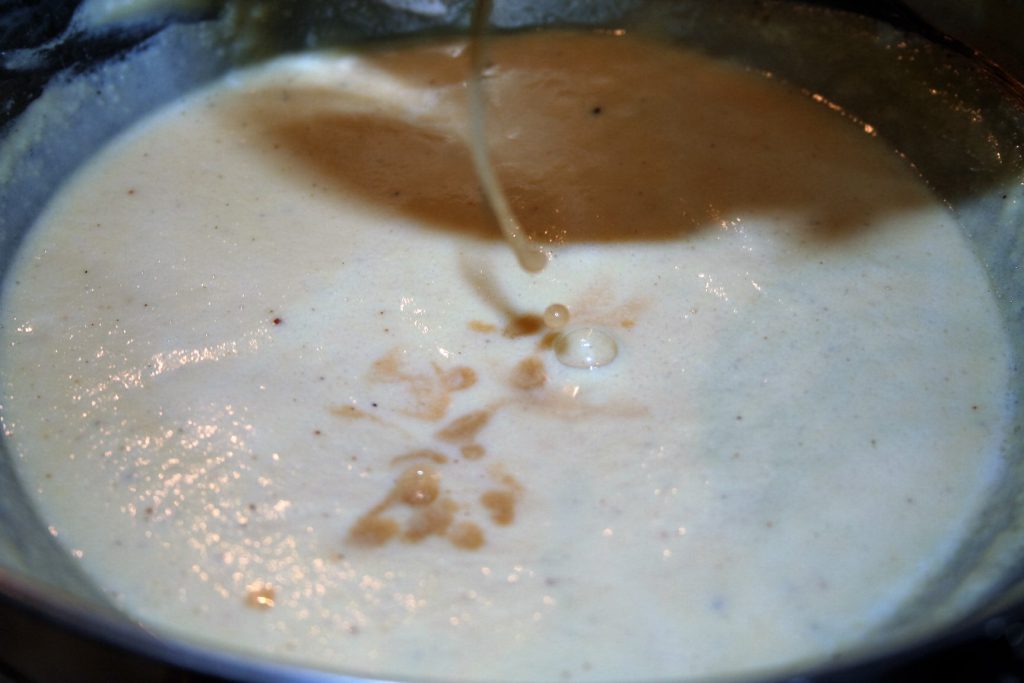 Pour this into a bowl and cover with plastic wrap. Refrigerate.

(Sorry, forgot to get a picture.) Your choice of bowls is important. If you use a larger, flatter bowl, it will be nearly set much quicker than if you use a smaller, deeper bowl. I found a glass bowl at Dollar Tree that looked like one my granny would have used, so that is what I used. It was a deeper bowl.

Keep checking on the pudding. You want to catch it before it sets up firm but cooler and firmer than when you put it in.

I checked on mine and found the middle was still rather warm while the outer portion was setting, so I stirred it up a bit to get it all back to the same temperature.

When it is just about soft set, it is time to beat the egg whites to stiff peaks. Now fold the egg whites into the pudding. I like to do this in a couple of batches. I take about 1/3 of the whites and fold it in, not being overly concerned with keeping them stiff; this is to lighten up the pudding so the rest of the egg whites fold in more easily. Remember, folding is cutting down through the middle, scraping the bottom of the bowl as you bring the spatula up the side and fold the bottom onto the top, turn the bowl a quarter turn and repeat. 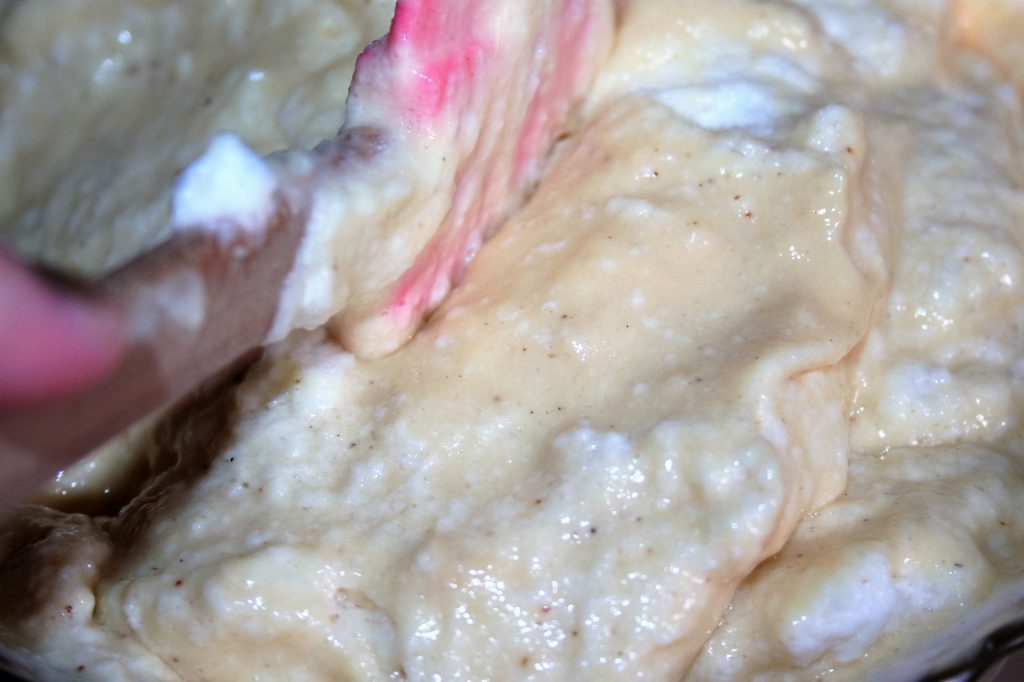 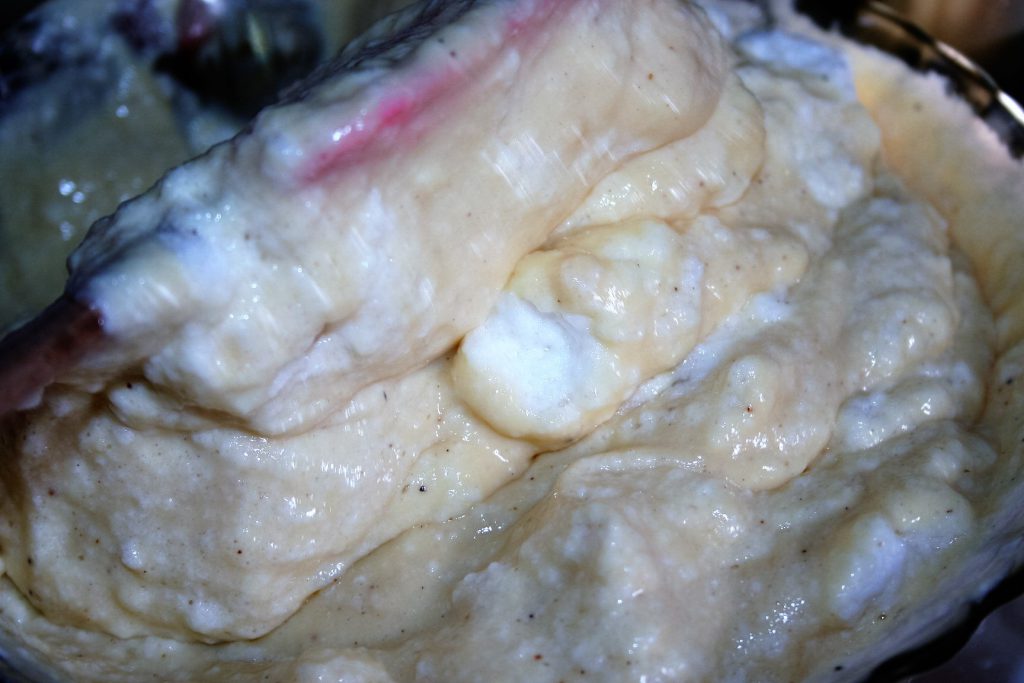 When there are no more lumps of egg whites, you are done. Cover with plastic wrap and refrigerate again. I usually make this the night before I want to serve it so it is good and set when we want to eat it.

I forgot to take pictures of it when I was done mixing and when it was completely set. So, I asked my dad to take a couple of pictures and send them to me. 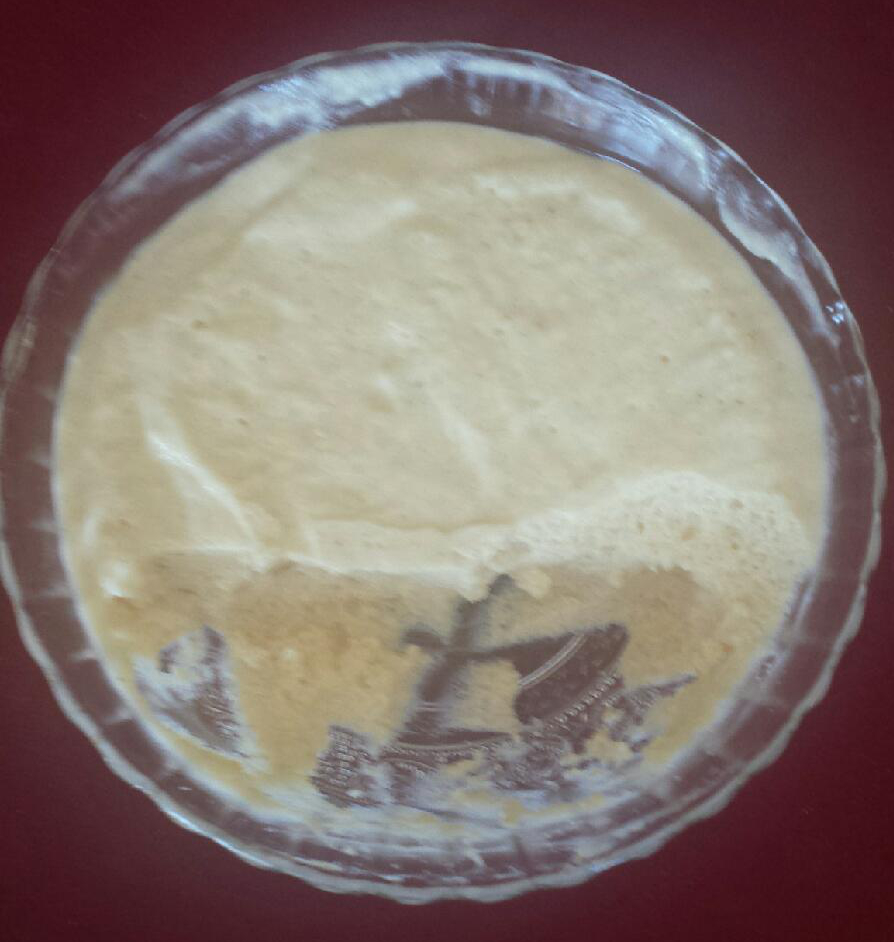 This is a light airy pudding that I was taught to squish a bite through my teeth, to fully enjoy it.

Daddy said he likes his with canned whipped cream but I always remember Granny serving this with chocolate sprinkles. 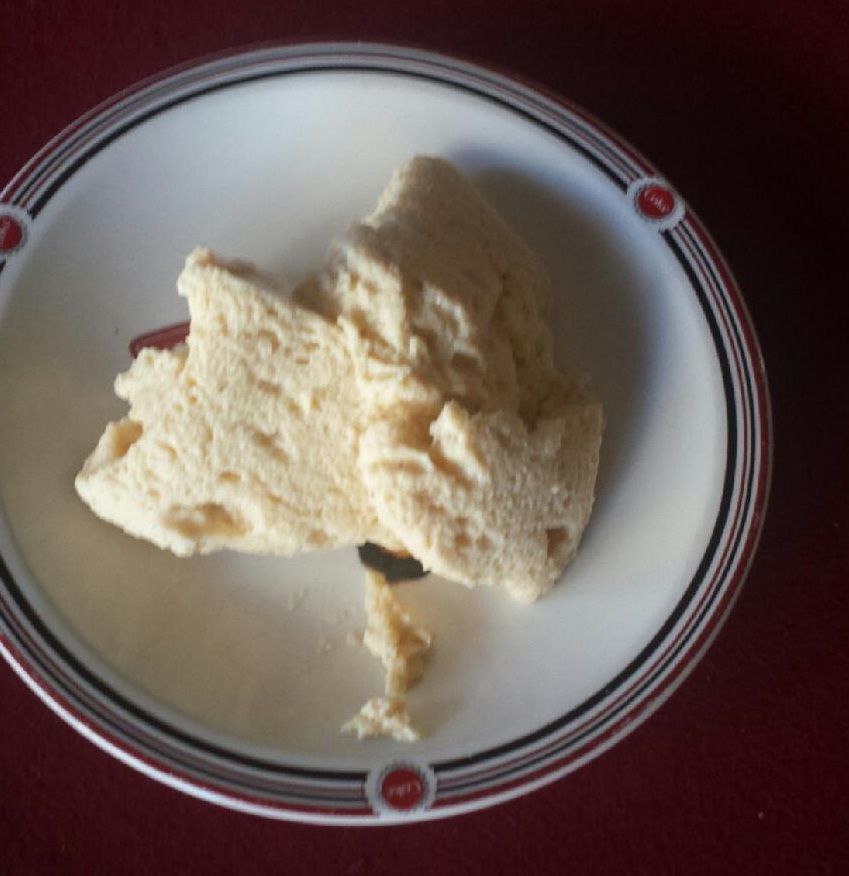 I had intended to make some of this yesterday so I could show you the individual serving with chocolate sprinkles. But the day got away from me and got too late for me to make it and serve as dessert last night. Then it got too late to make and be assured it would soft set before I went to bed. So maybe later today I will get it made and can add some extra pictures.

Now I must add that my kids prefer this pudding before I add in the egg whites but that is only because they never had it when Granny made it.

They actually liked my flops where the pudding separated into layers, which was just weird!

I will also add that the original recipe said to pour it into a pie shell and top with whipped cream and chocolate sprinkles. Granny NEVER served it in a pie shell that I can recall; Daddy might remember her doing it that way at some point in his lifetime though since he remembered it with whipped cream and I never remember her serving it that way either.

Well, I hope you enjoy this recipe. It is one that brings back fond memories of my granny and childhood.