This week’s Diva Challenge is to use only straight lines.

Now that is a challenge because my lines usually end up going a little wiggly somewhere along the way.

All the other challenges and focuses for the week are using tangles that involve some curved lines. So rather than trying to see what the focus tangles would look like using only straight lines, I opted to just keep it simple this week.

The first straight line tangle that comes to mind is Paradox. I love Paradox because it makes curves out of straight lines.

It is an amazing tangle that took me a while to get a grip on how to draw this one successfully but since there weren’t a whole lot of published tangles back then, I didn’t mind spending the time to do so.

I decided that I’d try to make it appear that each tangle was overlapping the others with Paradox on the “top.”

Next I wanted a boxy tangle but wanted my “boxes” to be large, nearly as large as my paradox. I started to go with Dex but once I got the four boxes drawn, I realized it wasn’t going to work, so added a few more lines and went with another old favorite, Cubine.

Somewhere along the way my boxes got out of proportion (mostly because I started with just four boxes and then switched up to a grid) so on the bottom I have one oversized box. Oh well!

I decided I’d use another favorite tangle, MacDee, as the farthest tangle. It is such an easy background tangle that I gravitate towards it frequently. This time I thought I’d leave the blackened boxes of cubine open so you could see macdee in behind. Unfortunately my lines were off too much and I had to blacken them in, so there isn’t much of MacDee showing but I still like it.

I forgot to scan before shading. That tends to happen when I have large bits that get blackened in. So without further adieu, here’s my tile for this week’s Diva Challenge. 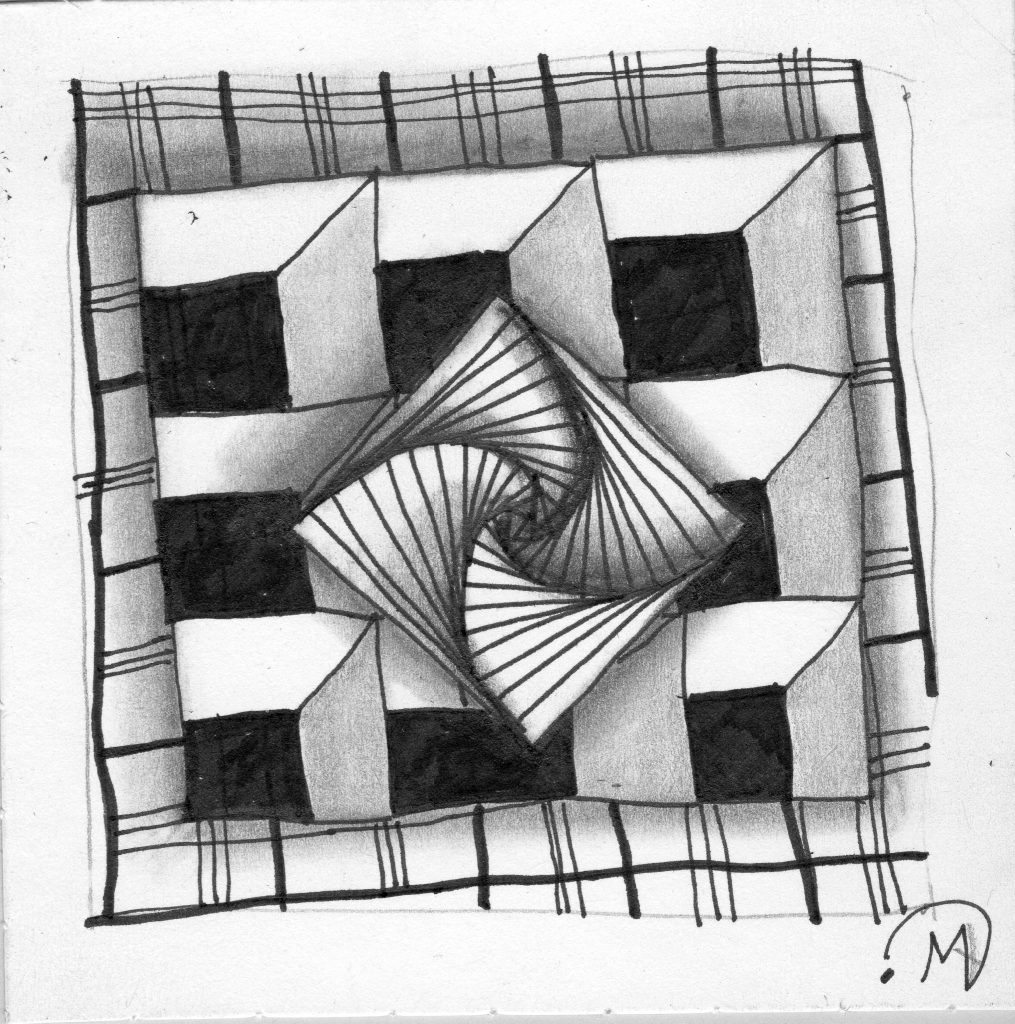 As you can see, it is all kind of tilted.

Actually, you can see some of the MacDee lines I attempted in some of the blackend parts of Cubine. I use a Graphic 1 micron for big black sections.

You are a huge encouragement to me.