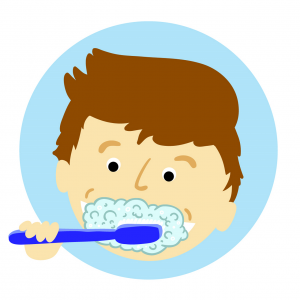 FlyLady taught me years ago, that even if you don’t think you have a routine/schedule you do. People have a tendency to do certain things when they get up or go to bed or at some other point in their day. The kicker is that the routine you are keeping may not be working for you.

I used to have the routine of hitting the snooze bar on my alarm clock several times before finally pulling myself out of bed, shuffling across the floor to my chair where I would drink the cup of tea my wonderful husband had prepared for me and pray or read my Bible or some other such thing as it got closer to the time when I needed to make hubby’s breakfast and lunch and off he’d go.

I’d procrastinate getting dressed, and making my bed (if at all), and would manage to get through my day generally feeling like I was undisciplined and/or not accomplishing much in my day. You see, that was a routine; it just wasn’t conducive to productivity or much in the sense of accomplishment.

I learned about morning routines, evening routines, before bed routines, weekly routines, and other such things. I found that incorporating some of these in my life really gave me a better sense of accomplishment and overall peace/joy because I wasn’t fighting myself any longer. Now don’t get me wrong, it wasn’t easy, but just starting with ONE thing and getting it down is a good beginning. Then add another thing until you have those two down. If you try to incorporate too much all at once, you are setting yourself up for failure. Whereas if you just set out to do one thing (or a couple things) in the beginning, you set yourself up for success.

I read the book Make Your Bed by Admiral McRaven last year and he shared some good thoughts on this as well. It is a short little book that he wrote based on a commencement speech he gave. It is an easy read that I got from the library. I recommend reading it.

Thankfully, I’d already started the routine of making my bed as soon as I get out of it (most mornings

). I also get dressed right away most mornings–the exceptions are mornings that I have to get dressed enough to face the outside world, which generally includes some uncomfortable clothing,

. On those mornings I stay in pajamas until I need to get dressed, usually two hours later, and make my bed before getting dressed, if the bed fairy (a.k.a. my hubby) hasn’t made it already. (Side note: If hubby has made the bed, I thank him.

All of that to say that we are all creatures of habit–some are good habits and others not so good. Children do well on routines also. It is good to be consistent in their routines and what you do.

There is this gal I watch on youtube that loves to read. Her toddler loves books as well. My son loves video games. His son loves to have a controller in his hands like his daddy. Children follow the example we lay out for them. It is good to help children have routines.

When my children were young, even before they could read, I made a routine for them with pictures and put it in a page protector (better to have laminated it, which can be done inexpensively at Mardel or some teacher supply stores) and pinned it to the wall for them to follow. This included things like a dinosaur brushing his teeth and one washing his face. One making a bed and one eating. I also put a picture of clothes for them getting dressed. This gave them the visual reminder of what needed to be done each morning.

It is good to have some plans for how your days will go so that you don’t end up doing nothing or getting frustrated. Change of scenery is helpful too. Getting outside everyday is good. I read a post on Busy Toddler about her schedule–she leaves the house every day (around 10:30) for a while, for something to do. But living in the country I say that it can be changed to getting outside at a certain time each day. It can be something as simple as going outside and letting the child run across the grass (or parking lot, as the case may be), to using sidewalk chalk or playing with a ball or some such thing.

Wow, this has gotten rather lengthy, so I’ll leave it for today.

Have a great day,