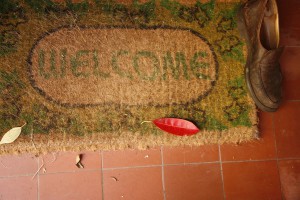 Mike and I have an agreement, he texts me when he’s headed home and lets me know how long until he arrives. He is a paint contractor so his commute varies from job to job and his estimated time to get home changes daily.

The reason we arrived at this arrangement began about 17 or 18 years ago. Yep, that’s a long time.

You see, since I homeschooled our children, we pretty much did everything in our main room. Mike would come home and we’d have books and papers piled around and the kids would be playing with toys and it just looked VERY lived in. Of course if you just come into the front door it probably looked like a chaotic mess. No matter what, it was not the calm welcoming surroundings that he would eye upon entering the home. As you might imagine, this did not make for an easy transition for him.

Eventually we landed on our arrangement. When Mike sends me the text that he is on his way home and approximately how long it would take him to arrive home, the kids and I would stop and tidy everything up and I would start dinner. The kids didn’t have to put away toys they were playing with but anything they weren’t playing with needed to be put away.

When Mike walks in the door, we always say hello to him and I ask him how his day was. If he’s ready to talk about it, he does. Many times he just needs some space for a little bit and I just wait, going about doing whatever it is that I was doing when he walked in.

Things have changed up a little bit as the kids have grown and begin working. Sean doesn’t get home from work until shortly after six o’clock, which is later than we were used to eating. Now Mike has a chance to get home, shower, change clothes, and change gears before Sean gets home and we eat dinner.

I recently read an article that was soooo good that addressed this subject very well. She still has young children and her approach is so neat. I urge you to check it out. Her article challenged me to think about how I greet Mike when he walks through the door. I need to realize that he is leaving his business world and entering his home world and I need to let him know that I’m glad he’s there (and I appreciate all he does to allow me to be here making his house a home – and raising our children when they were young).

I hope this post will encourage you to show your man respect by letting him know how much you are glad you he has arrived back home to you and the family.