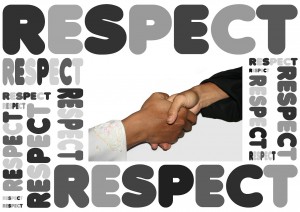 The thing on my mind today is respect and reverence. There are so many kids in today’s world that don’t show any respect to, well, anyone really. It is a tricky time because I don’t think we have to get all Mr and Mrs either because respect isn’t just about how you address someone, it is also about attitude.

When I was very young, we called our teachers Mister or Mrs.________. At church we called people Brother and Sister     Last Name     . Then when I was my teens, we went to a different type of church where people were just family and were called by their first names. It got tricky to show the proper respect to those older than me but it was nice not to have the title required when addressing people; it made them more friends than strangers.

Then as time went by, I was in my early twenties and I taught a group of young girls at our church. They called me Miss Michele. Even after I got married they called me Miss Michele and that was okay because it was just easier to say than Mrs. Michele, which kind of morphed into Ms. Michele, not feministically but more of slurring or lazy speaking of Mrs. My kids followed suit.

Along the way my kids learned how to talk to any one, no matter their station in life. They learned to talk to a doctor, lawyer, and minister as well as a cook, janitor, or elderly person. This happened because they were put in situations where there were not many, if any, kids their own age around and in order not to be bored, they had to talk to other people.

Whatever we did worked because recently I have had people tell me that my kids are great kids and so respectful. They are grown now; I hope they keep this a part of who they are for the rest of their lives.

I know I said reverence was on my mind too but I’m not sure what to say about it. It just seems to me that we don’t revere much any more. I’m not sure that is a bad thing though because it seems that we may not reverence the church buildings any more because we have a closer relationship, a friendship with God today more so than in years gone by.

But I also notice that people today will get up during church and go and talk to someone else in a different part of the sanctuary, while the minister is speaking! Our church has a habit of opening with announcements, prayer, and offering and then tell us to greet one another, which will usually last for about 10 minutes or more. Generally speaking we are in the middle of greeting others when they start the announcements. I pause, pay attention to the speaker, bow my head in prayer and THEN continue talking to whomever I was speaking with before BUT I have noticed others just keep right on talking and some don’t even lower their voices. It just stuns me.

I guess I’m just trying to bring this up so that you think about what you are teaching your children. Remember, they will more likely follow your example than what you tell them to do. Respect and reverence is important but it is also vital to keep them in moderation or more low-key, not doing something that leads to a false respect, like I had when I was young but finding what will lead to true respect.