Tiffany and I had a very very long errand day this week! I started by doing my nails (I used my sensationail gels and since I haven’t done them in ages, it took me about an hour to an hour and a quarter, which is really good for me since it has taken me two hours when I was first learning to use the gels.

I love the gels but alas, I was nearly out of my raspberry wine color that I got with my starter kit. Since the bottle is black, you can see how much is in the bottle — I have a hard enough time with regular clear glass bottles.

At any rate, I did the first nail and then started the second and realized there was very little color left in the bottle. Now gels are different than regular nail polish and you just can’t wait to finish it until later, so I had to eek out enough to do all ten nails, TWICE! I came out with a bit of an ombre look to them. I just embraced it and am pretending that is what I intended to do.

Well, last week with the conference I realized that I no longer like my hair shoulder length. BUT I also know from experience that I don’t like it SHORT either. Soooo, even though I just had my hair cut two weeks ago, I had to get it done again this week. Once again, the uncomfortable task of trying to explain to the sweet beautician what I want and don’t want, while trying to figure it out myself.

I think she did a good job! Tiffany and I decided ahead of time that I don’t want it any shorter than the middle of my neck, which I told her. I explained that I like to flip the ends up all over the back, so she gave me lots of layers (a sort of shag, she said). Then she cut the top short enough to be bouncy but not so short it will stand up without me wanting it to. From there we discussed the sides and, I’ll be honest here, I don’t know what she did with it but I think it is going to work fine. I say think, because I have yet to have a chance to work with it and tell for sure. 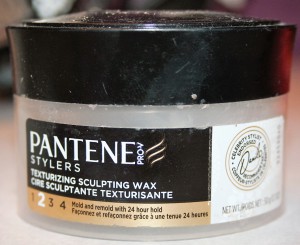 Tiffany thought it looked pretty good, as she proceeded to put the sculpting wax in my hair to spike the back a bit. I hate it when you use a product for a while, a year or more, and when you go to buy a new container of it because you are about out, it is no where to be seen. Seriously! No where! It’s like I dreamed it.

I have used three containers of this product. The last two are nearly empty. And now, I cannot find it. I cannot even find something with the same wording — promade. Now what? So on a day, when we have been out of the house, driving and shopping for seven hours, I have to try and find a replacement. 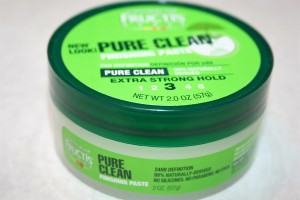 Here is what I came up with. I have no idea if it is even going to work. I did not notice that this had a hold strength on this when I bought it. Oh well, we shall see!!!

Well, that’s enough of my adventures for one day. I hope you have a great weekend. I know I will, as I will be spending it with my family.