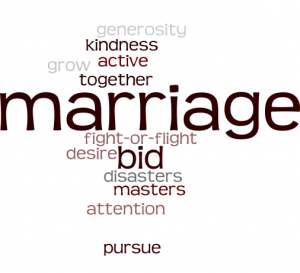 I don’t know why I find it so difficult to find topics to write about on Mondays. I guess I don’t want to ever appear that I’ve got it all together even though Mike and I will celebrate our 28th wedding anniversary in less than 2 weeks. It is a great accomplishment but has NOT necessarily been easy.

I come from a family full of long marriages. My parents will celebrate their 53rd anniversary next month. Each of my grandparents were married only once and that until death separated them.

Mike on the other hand comes from the opposite situation. His mother was married and divorced three times. His father too was married three times but divorced only twice and died several years ago, still married.

Mike and I are both pretty stubborn.

I think this is probably the biggest contributing factor, other than my belief that once we said “I do” to marrying each other that became God’s will for our lives and He said “what God has joined, let not man put asunder.” (I do know that there are extenuating circumstances for which ending a marriage are permissible but these don’t apply to us.) This doesn’t mean that I (or Mike) haven’t ever been so frustrated with how things were going that I wasn’t tempted to give up though. I’m pretty sure that I gave Mike the same temptation, especially when the kids were young.

I find it difficult to remember those years very well, as they were hard, tough years. But looking back I know I made Mike frustrated because I frequently ‘rejected his attention’ not realizing that was what I was doing. I read this article recently that talked a little about this, entitled Science Says Lasting Relationships Comes Down to 2 Basic Traits. The two traits are kindness and generosity.

The article tells of tests that were done on couples and found that there were two groups of couples they dubbed either ‘masters’ or ‘disasters’. The ‘disasters’ had a different physiological response during testing than the ‘masters’ did; the disasters had  ‘fight or flight’ physiological signs or symptoms and were the ones whose marriages did not survive.

I know the article is somewhat lengthy but it is worth the read. The next part of the article relates to some of the mistakes I made during those tiring years when the kids were young. It talks of how one spouse will ‘make a bid’ to the other, looking for a connection. What one does with this bid can either help or hinder the marriage. As the years go on, you have to keep working to grow together, taking interest in one another and the things that interest your spouse. Otherwise, you will grow apart.

I guess the bottom line is to remember the person you fell in love with and actively pursue him, watching out for the signs and signals you are sending him. Know that there is meaning behind the ‘bids’ he presents and desires you and your attention.