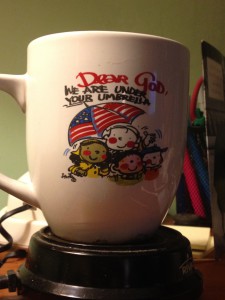 This week I read a post on Calm. Healthy. Sexy. entitled, 6 Free Gifts to Give Your Husband, that made me think a bit. One of the gifts is to “Treat him like a man, and let him treat you like a woman.”

She went on to explain that a man likes to take care of his woman, so let him do things for you. In other words, don’t stop him from warming your car up or whatever it is he likes to do for you. Mike makes my morning beverage every morning. I make his lunch.

I’ve been trying to look for the ways the Mike takes care of me that I have either gotten so used to that I don’t realize all he does for me anymore, or they are just so naturally done, without making a big deal about them.

Like I already mentioned, he makes my morning hot beverage every morning. It started as a cup of tea. Then I learned that green tea was better for me, so we switched to that. Over the last several months, I have changed to warm honey lemon water.  The one constant in all of this is that Mike makes it for me and has done so for about twenty years. Actually, I don’t really know how I like my drinks anymore because I usually only drink one a day and he makes it.

Yesterday, I thought about this again as we were riding to church. Mike fills a water bottle for me, to take to church, with cold water, which is my preference. Some weeks he puts my phone in my purse. Some weeks he puts a banana by my purse, so I don’t forget to take it. This week he put some mints on my phone because he remembered that I had run out last Sunday and he gave me some of his.

I also realized that sometimes he plugs my phone on the charger because he noticed that the charge was running low.

Is he perfect? Nope!

Does he ask me if I want something every time he goes into the kitchen to get something? Nope! But if I keep my eyes open, I can see where he does look out for me.

Sometimes he is looking out for me sooooo much that it is annoying, like when he wants to drive me somewhere rather than let me go alone. It took me YEARS, nearly 28 years, to realize that is his reasoning for him not liking me to go places without him – well, that and the fact that we really enjoy spending time together.  When I finally realized this, it made it so much easier to handle. (I am a rather independent person, so if he doesn’t want me to go somewhere I had a tendency to think he didn’t trust my driving or something, which is NOT the case at all.) I never really understood how seriously he takes protecting me. It really is sweet when I see it in that light.

So, I encourage you to take a second look at some of the things that your hubby does or wants to do, and realize that it just may be how he takes care of you. It may make some of them not so frustrating and actually kind of sweet after all.