We have not gotten away in quite some time, so it was a joy to do something different for a change.

It had been raining quite a bit here in OK but we were not going to be discouraged. Because we know that camping in OK is tough, we decided to make camp at the Hampton Inn in McAlester. After going to Natural Falls State Park last Thursday morning and eating lunch there (see last Friday’s post), we headed down to McAlester, checked into our hotel, settled in and then headed out to dinner. We ate at a Chinese buffet that night for dinner. I enjoyed it.

Then we went back to the hotel, rested about an hour and then went down to the hot tub, pool, and sauna. They have a workout room too but with all the hiking we did, we didn’t need any more.

The next morning we got up and went down to the complimentary continental breakfast, which was very nice. They had everything from waffles you make fresh yourself in under three minutes to oatmeal to fruit. After breakfast we headed out to Robbers Cave State Park which is about 45 minutes away from the hotel. We still had not encountered any rain, for which we were thankful. (The picture above was taken there.)

It seemed as if it had rained fairly recently, so we were glad we left the hotel when we did.

They guys climbed all over this area for about 30 minutes or so before we moved onward on the trail. (This was right near the very beginning of the trail. We hadn’t actually hiked anywhere yet.) Brian and Sean even investigated the opening here behind Lauren and I.

I know this next picture is a bit blurry but it is one of the few I have of most of us in the same spot on the trail together.

Sean and Tiffany are the only two that climbed down into the actual cave.

Tiff took this picture from inside the cave looking out at us.

This next one reminds me of the view atop Twin Peaks when we hiked in VA, near Mount Rogers. 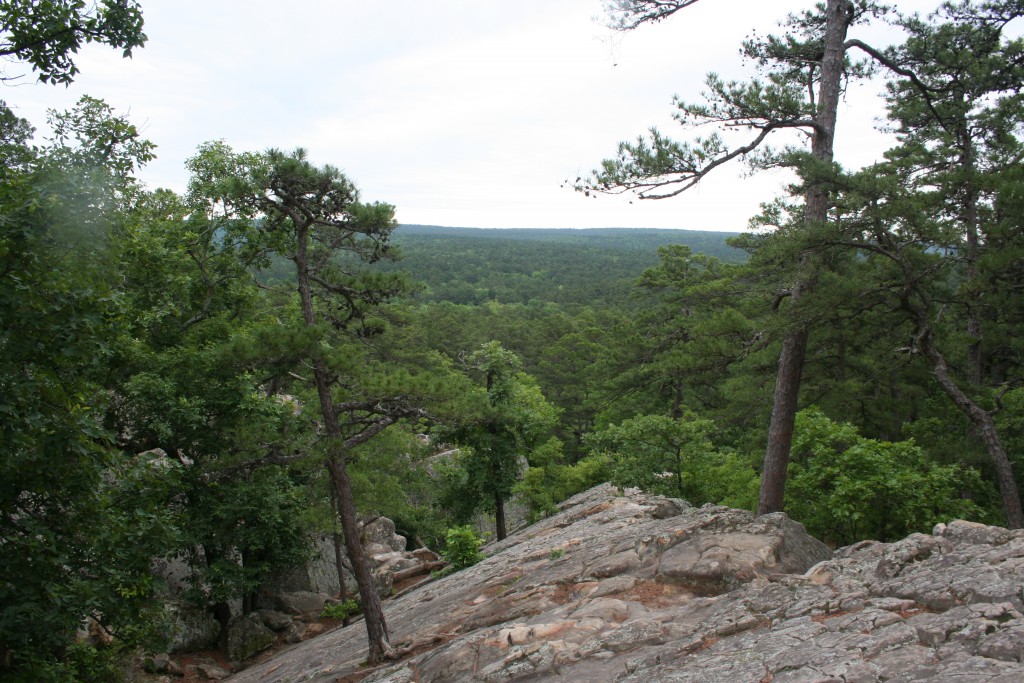 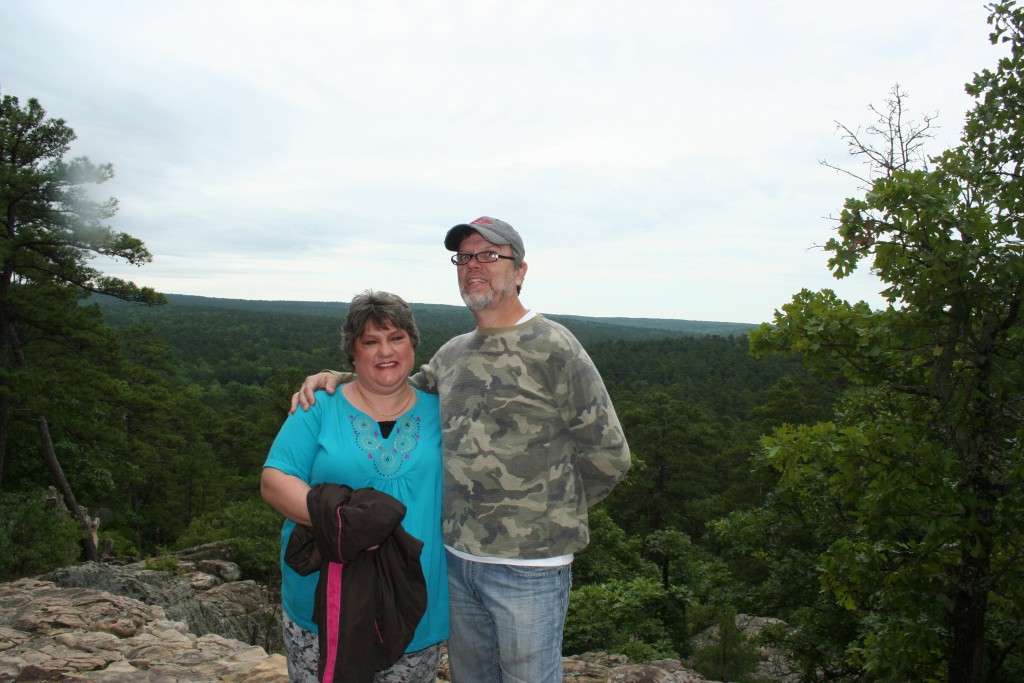 This is about the time I realized that I was doing it wrong! I am NOT new to hiking! But my hiking stick was not even on my radar at any point until I needed it! I felt like such a newb. Climbing up wasn’t that difficult because there were rocks around to grab on but coming down was a bit treacherous and I nearly fell 2-3 times. It didn’t help that it had rained so much over the past couple of days that there was water running down the path we were walking on.

This was probably the best part of the whole trail . . . well, next to being on top of the cave and looking out over the beautiful view. This is the horse corral. It was really cool. 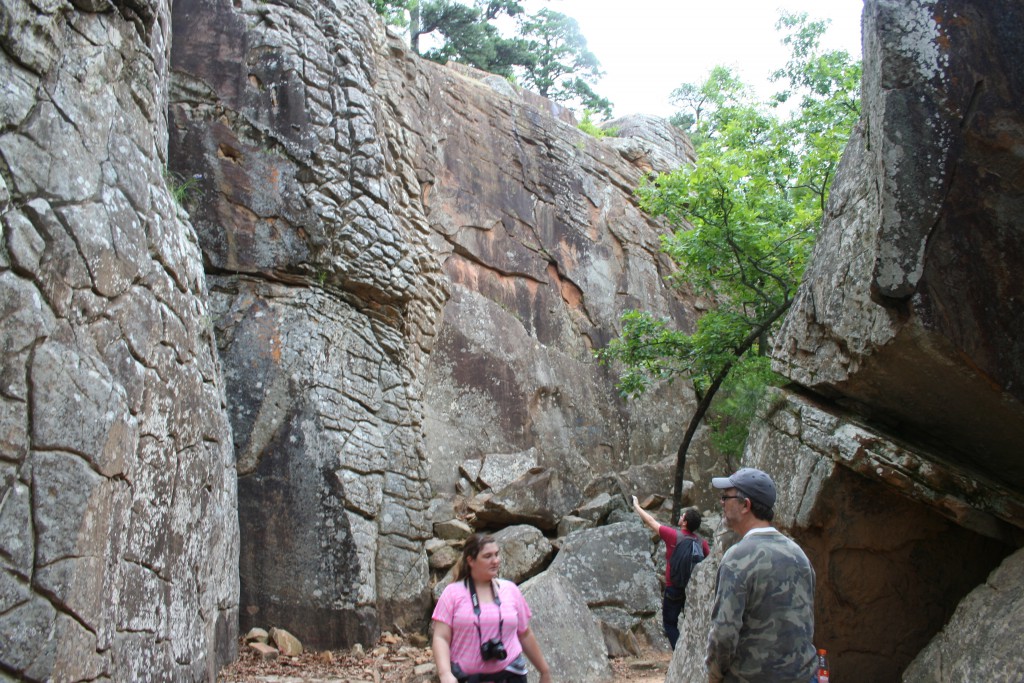 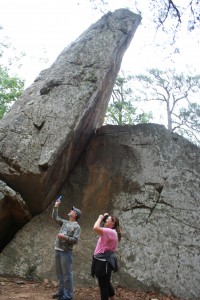 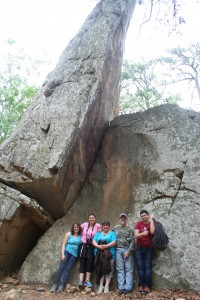 Tiffany, Lauren, me, Mike, and Brian in the horse corral (Sean taking picture) in picture above on the right.

We finished the trail and this is what I see as I come back from the restroom. 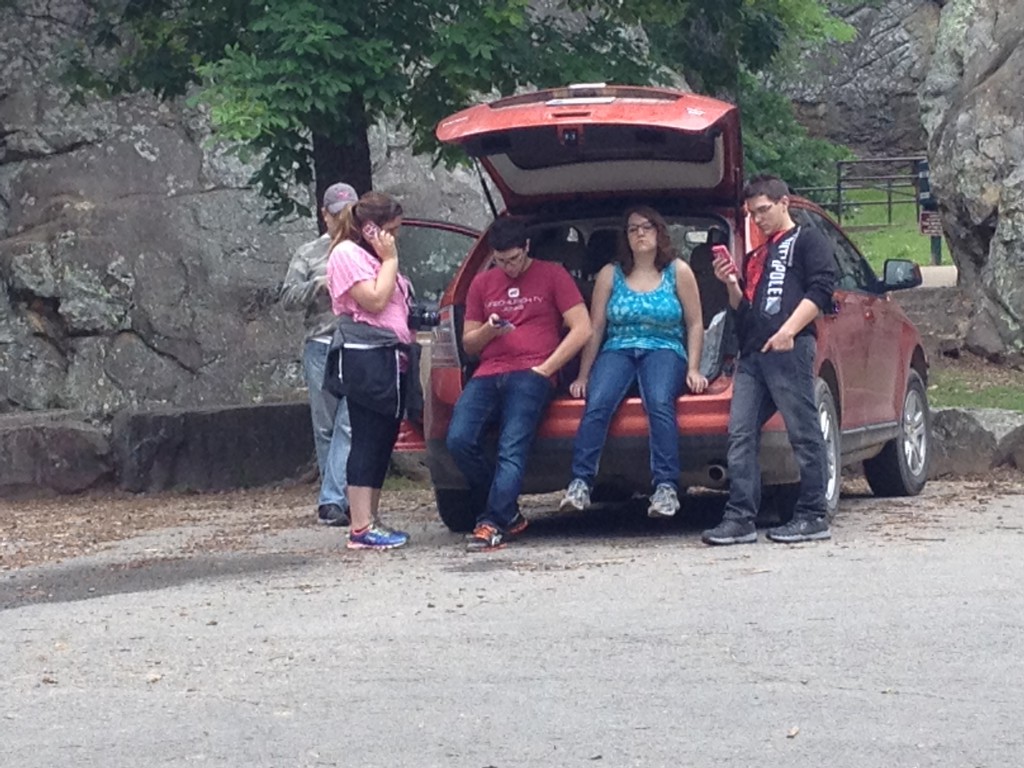 It was time to find a place to eat our picnic lunch. But it began to rain. Lucky for us, we found an available pavilion. I know this picture isn’t very good but I wanted you to see the rain.

(I think Brian was making a video.) 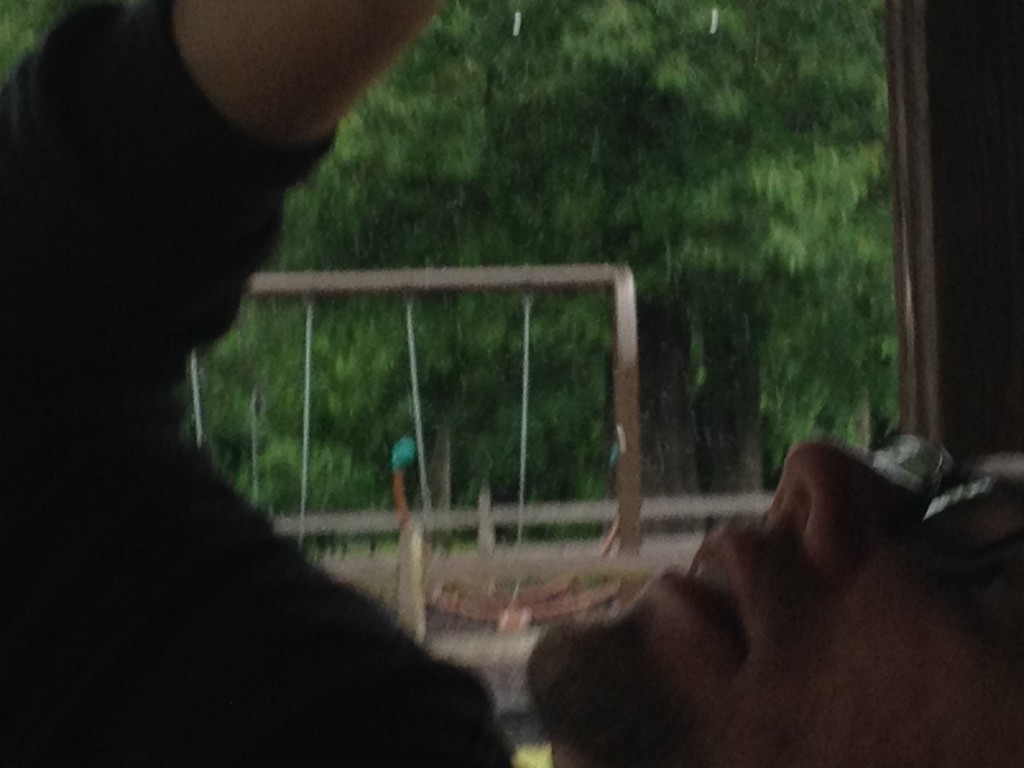 I don’t know how I missed Tiffany in these two pictures as she is sitting just to the right of Mike and just to the left of Lauren.

After lunch we stopped in the gift shop and nature center and headed back to camp Hampton. We were going to eat at Western Sizzlin’ but it didn’t look like a very meaty buffet so we headed next door to Denny’s. Afterwards we went back to the hotel, rested for about an hour, and again went down to the hot tub and pool for about an hour or so. 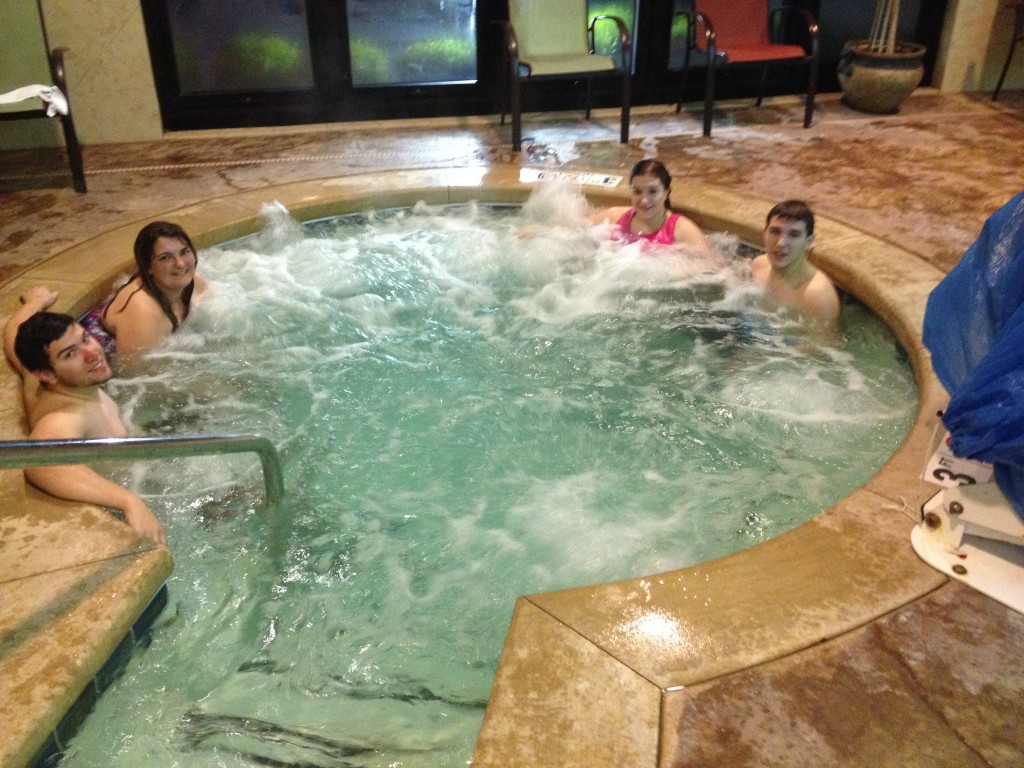 Then it was back upstairs to shower, get in our jammies, and play games while Mike had on Discovery channel.

This is getting a bit long, so I’ll share what we did the next day next Friday.