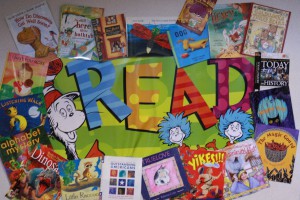 Last week I shared what we used in the beginning. After that first year with Hooked on Phonics, Bob Books, and eventually Pathway readers at the end of the year, I followed the advice from one veteran homeschooler on the Practical Homeschooling forum on AOL and purchased The Scaredy Cat Reading System.

I think I would have enjoyed it so much more if I had just used the curriculum and taught it myself. Instead I used the accompanying cassette tapes that actually taught Brian for me. Hmmm, now that I think about it, I seem to recall using this, in part, during that first year. It has games to play to practice the sounds and eventually sounding out words. If you recall, the same is true of the math program we used, which I was great because that was about a six year program. One decision I wouldn’t have to make again for years.

We made a cross-country move after the first year (kindergarten for Brian). Brian was then 6, Sean was then 4, and Tiffany was a mere 3 months old. I used Five In A Row (FIAR) with Brian while Sean played quietly on the floor, most of the time, in the same room with us. It was a fun time. Brian kept working through the math, Scaredy Cat Reading System, and Pathway readers.

The next summer I enrolled him in the Summer Reading Program with the local library and his reading just took off. I asked Sean that year (he had turned 5) if he wanted to learn to read. I had learned that when a child does not desire to learn to read, it is very very difficult to teach them to do so. He let me know that he did want to learn to read. All year long I had researched what program to use next. I settled on Teach Your Child to Read in 100 Easy Lessons. With this program the child did not need to spend time teach the child all the letters and their names. Individual letters are introduced with one of the sounds it makes. Visual cues are given to help the child know which sound the phoneme makes.

I really liked this method but unfortunately Sean did not.

Well, he liked some of it. The part he did not like was having to re-read the passages. It has some good activities including ‘Say it Fast’ and ‘Say it Slow.’ We made it through about 1/3 of the book before I gave up because of his insistence at not re-reading the passages. Knowing what I know now, I would have continued on and just allowed him to read it just once but I was a new homeschooler and thought I had to follow the directions exactly or it wouldn’t work.

I found another program, Teach a Child to Read with Children’s Books. I have found this book, that I was able to read by borrowing it through Inter-Library Loan, as a pdf available for free online here. I like this because it has a list of library books to use for each grade level. I used this with Sean the second semester and come the summer reading program again and he took off reading as well.

My kids spelling wasn’t too good, so I began looking for something to help with that. I found Reading Reflex which is another learning to read program but could also be used as a remedial reading (or spelling) program. This program uses manipulatives, which I liked.

By the time Tiffany was ready to read, I had found Reading Made Easy by Valerie Bendt. It is very much like Teach our Child to Read with 100 Easy Lessons and is Christian based, which I loved. Tiffany was much like Sean and did not like re-reading the passages. Thankfully I had learned a thing or two by then and did not always enforce that she re-read the passages. I did make her finish the book though.

So there you have our journey through teaching my children how to read. It’s never an easy task but it is most rewarding!