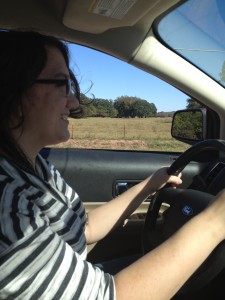 Years ago, a fellow homeschooler that has children around the ages of my children and a couple of years older told me that boys were not eager to drive and that was okay with her. At first it seemed odd to me but the more I thought about it, the more sense it made. She told me that she wasn’t pushing them to drive. When they were interested (or it became necessary) is when it would happen. I adopted this thinking as well and hoped my kids would be the same way. Well, I think I got way more than I bargained for.

In Oklahoma in order for a person under the age of 18 to get a learner’s permit, they have to pass an 8th grade reading proficiency test. I think this was done in efforts to keep kids in school. If you homeschool this can present a bit of an issue, especially if you homeschool in a small town.

For Brian, my oldest, it was fairly easy because the test could be taken at the county vo-tech school albeit, only on certain days of the month. We managed to find the school, set the appointment, and get the test done and the results were mailed within a few weeks.

A couple of years later when Sean was ready, they didn’t provide the test any longer and thus began my battle to find how to get this done. Sean, however, was not in any big hurry. I began pushing it his senior year in high school. As it turned out though, I never did figure out how to get him to take the test. He turned 18 in March of his senior year, so we just went after that since it was not necessary any longer.

Tiffany is four years younger than Sean but I started a little earlier trying to figure it all out once again. Coincidentally, the place I am to vote at is the local middle school (where the 8th graders attend). I decided that since I was there anyway, I would just go into the office and see if I couldn’t talk to someone and try to figure it out. The principal was great and said he’d look into it. With his schedule, the holidays, my procrastination and all, it took us about a year to get it worked out but they decided that I could bring her to the school and they could administer the test.

They were great and Tiffany did awesomely but they did not have the OFFICIAL form and thus began a new problem that I wouldn’t even know existed for another year or so.

As it finally turned out, Tiffany turned 18 before getting her permit and we no longer needed the form. :\

I have to say that waiting for them to be 18 before they began to drive was a great thing. They are more mature and responsible. Tiffany just got her permit last Friday and with the conference at the church this week, she is getting a lot of practice in very quickly. She is picking it up very well. She had a bit of a disadvantage from the boys because they were accustomed to driving a motorized vehicle from their time of mowing the grass on a riding lawn mower and she has only used that a couple of times.

I guess my point is that like most everything else, just because most people do it one way, does not mean that it is the best way for you and your family. Don’t be afraid to go outside the norm, even in this.

I hope our story can encourage you to do whatever is best for your family, be it to drive early or wait until later.