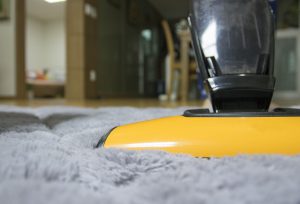 When Michael and I first got married, we both worked. We actually rode to work together. Well, wait . . . he drove me to work, about thirty minutes from where we lived and then drove to wherever he was working, usually within fifteen minutes from me. He’s a painter and as such, doesn’t go to the same place all the time.

Anyway, the point is that we left the house at the same time each day and arrived back at the exact same time each day–neither one was home any longer than the other. When we got home, neither of us felt like doing anything. It didn’t take very long and I realized that I like food too much to make an issue of working more when I got home–the desire for a good dinner outweighed my tiredness. So I told Michael that I’d go ahead and cook dinner when we got home but after that, if he was sitting doing nothing, so was I. (This included cleaning up after eating.) He seemed to be okay with that.

We were a mess that first year! I quickly learned to buy paper plates because they could be thrown away and not have a moldy mess on our hands. Paper plates saved our marriage! LOL

Soon thereafter, we paid my baby sister to come clean for us once a week. Oh my! She really earned the pittance we paid her. She vacuumed, did dishes, and laundry. I think she may have even mowed the yard! I have no idea how long that lasted, hmmm, maybe she does. She was a huge help!

My other sister got married the same day I did (double wedding) and remember sitting at the laundromat, right up the street from where Michael and I lived, with her one time as we waited on the clothes to wash. We talked about how difficult it was to work and come home and work some more. The difference was she and her husband did not have the same work arrangement Michael and I did but there was also another big difference, I was not afraid to have an argument with Michael about something just to keep the peace whereas she said they never argued.

See I would not trade those early arguments for peace because we used them to work through situations not just argue. I’m sure there was a better way to work through them but neither of us had the self-control we do now. But each ‘fight’ was worked through and we were at peace. Whereas my sister and her husband did not fight but were definitely not at peace. I counseled her that day to stick up for herself, talk to him, and let him know how she felt. Of course I did not advocate yelling and screaming because even I knew back then that wasn’t the best way to deal with differences.

Somewhere  along the way, we settled into a rhythm and things were good. After a few years, I got pregnant and after delivering our precious Brian, I stayed home with him. So then keeping house became my job; one I did not excel at–hmmm, still don’t but I get by, but I digress.

As time passed and we had more children and they grew and I home educated them, keeping the house picked up was difficult and a sore subject with Michael. My argument at that point was that we actually lived in our house 24/7 and all that living is messy. Thankfully I found Flylady and learned how to stay on top of the cleaning, finally learning a method instead of something being so dirty I couldn’t take it any more.

We began a daily pick-up time when we knew Michael was on his way home, so that he was not greeted with a huge mess when he walked into the house. We also began a ‘home blessing’ day where we split the chores (the kids and I) and had the house vacuumed, swept, mopped, dusted. windows and mirrors cleaned, and bathrooms cleaned in less than an hour.

It was smooth sailing for a number of years. As the kids grew and started working outside the home, those of us left, absorbed their duties. It’s a bit harder today for me to stay on top of all that cleaning. I have a set of chores I do daily (one load of laundry completely done to putting it in the appropriate room, emptying the dishwasher and refilling it, making meals, and vacuuming–well most days) but am floundering a bit to find the right method for getting those other things done consistently now that it is just me, with some help from Tiffany who works at home. But I will come upon a solution/method, I have no doubt.

Oh, when animals came into the picture, it was at the children’s request and thus their responsibility. To this day, Tiffany and Sean tend to the needs of the animals. I do buy the required items for their care but that is it.

I guess all this is to say that there is a method whereby you can handle all the chores that need to be done without stressing and arguing. Michael has grown much in our nearly thirty years together and still pitches in when he sees something that needs to be done be it a load of his work clothes that he ran out of or mopping the bathroom floor. I too have grown and have learned that just because he sees some task that needs doing and does it that is not an indictment or accusation of me, which I tend to feel since it is technically my ‘job’ to do.

Are we perfect? Heavens no!!! I just had a breakdown last week because of some stuff that needed doing and couldn’t do it alone. But . . . we get over it and do what needs to be done.

This has gotten long but I hope it has been helpful. If you are struggling with getting it all done, pray and ask God to help you find the method/system that will work for you. Check Flylady–she’s helped thousands tame the messy house beast.