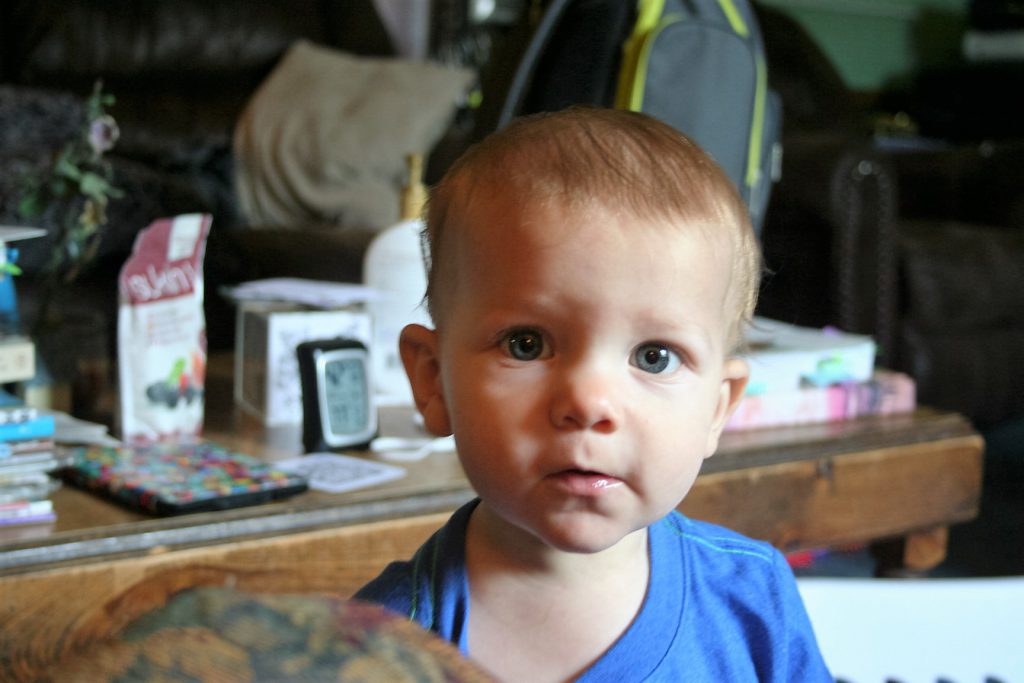 Yep! Liam was here this week. I love watching him. He had fun playing with our friend Meaghan and she was glad to get some baby cuddles in since her nephew lives FAR away. 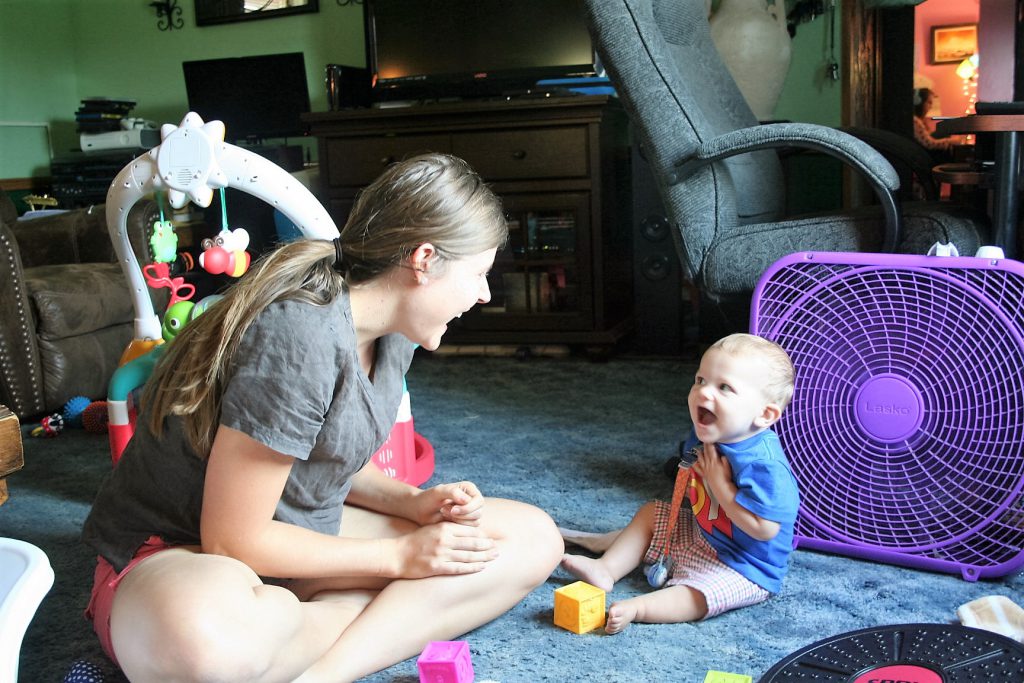 Of course, he liked playing with Shiloh too. 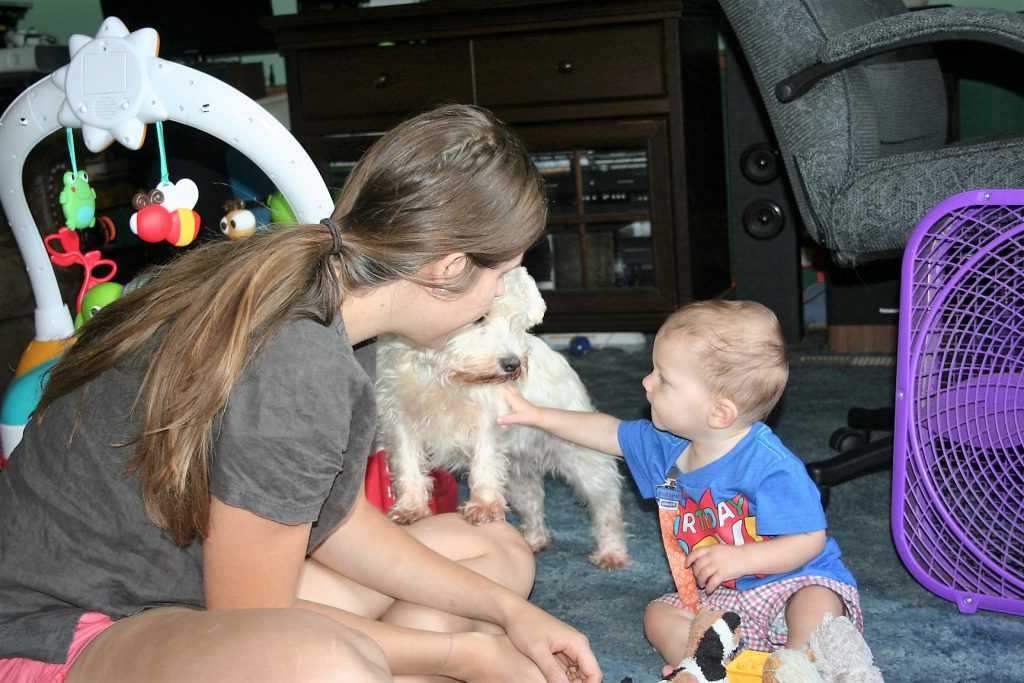 As you can see from his shirt, he had a birthday this week too! 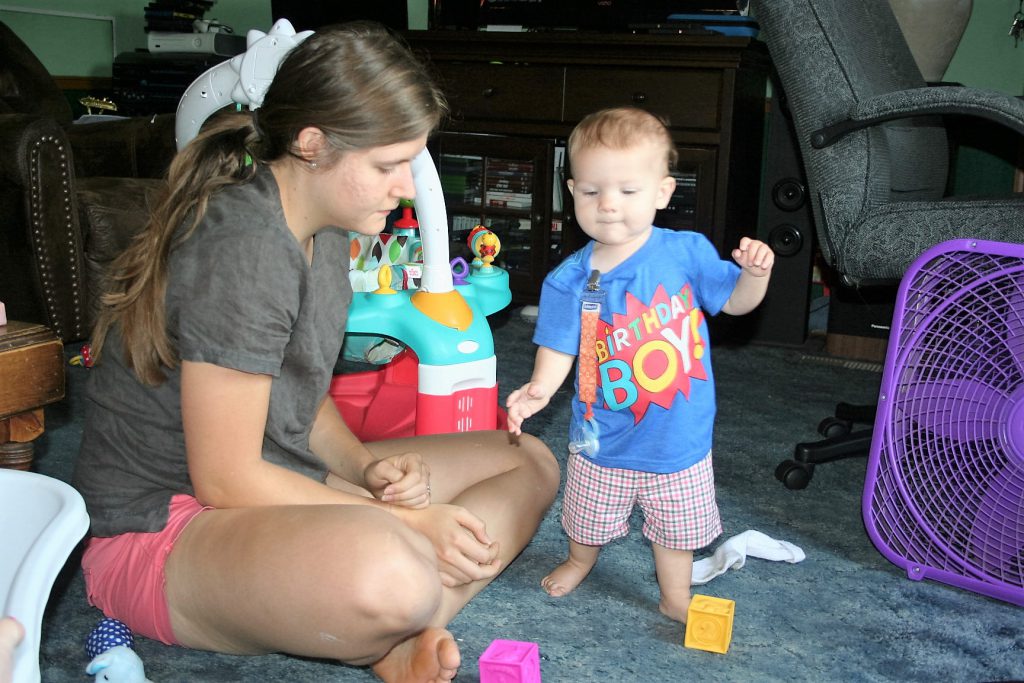 He’s a ham! When he saw I had the camera, he came over to me and was all giggly. 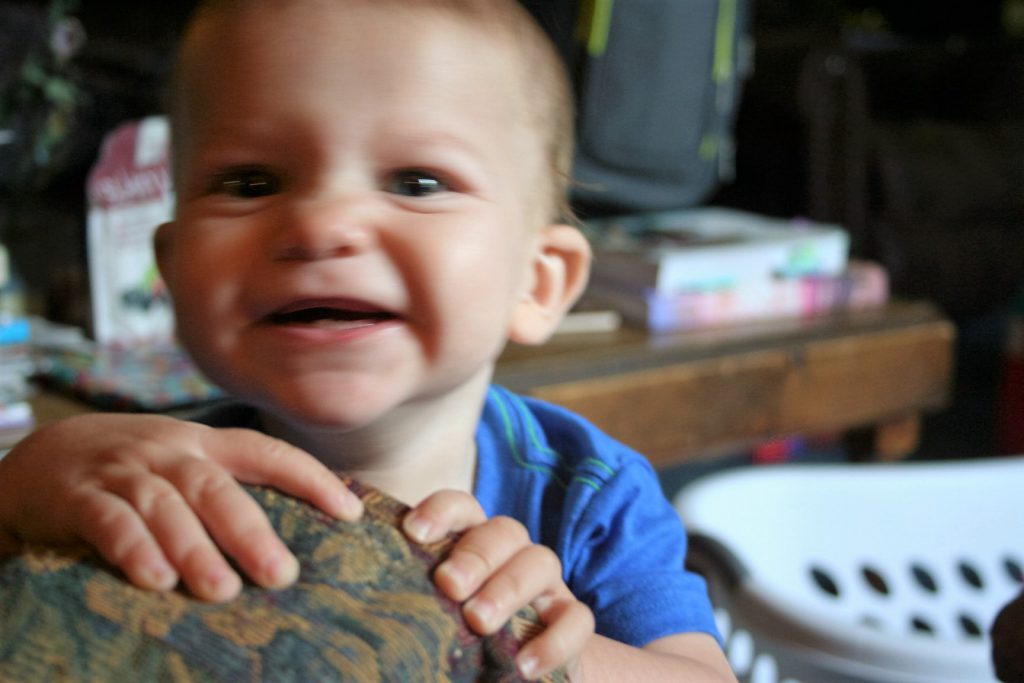 Please forgive the out-of-focus pictures; I figure slightly blurry is better than none at all. 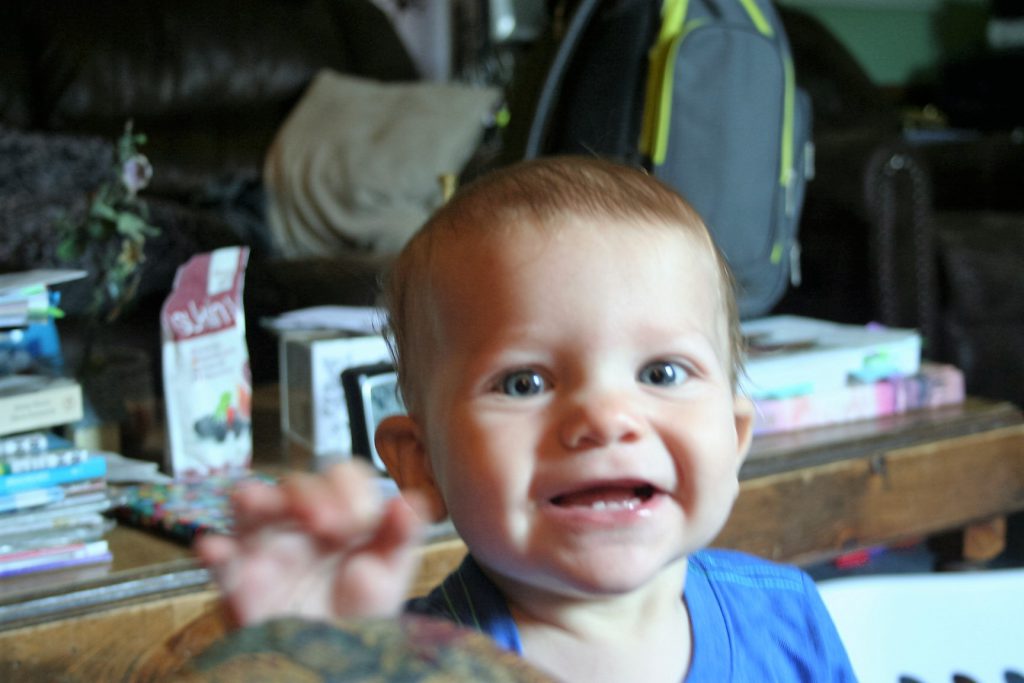 Yep, he’s got some teeth and cutting some more. They are bothering him a bit, as is usual, but it is making our normally really happy, sweet baby into a bit of a fuss budget at times. 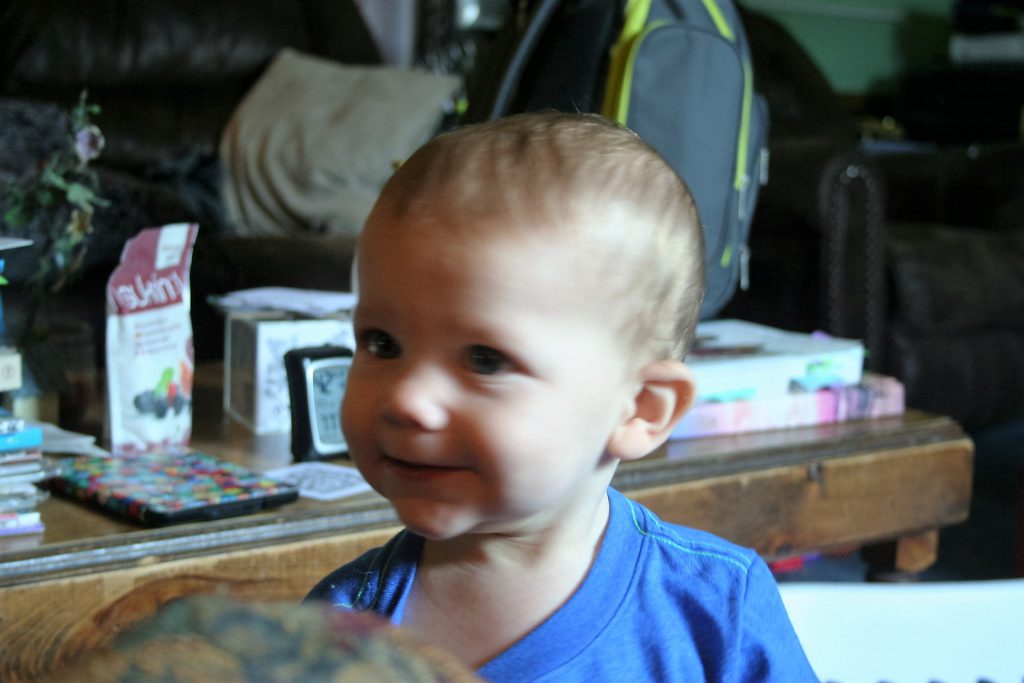 I just love that cutie pie! During one of his fussy bits, I decided to employ some distraction and had Tiffany put on a Veggie Tales movie (Jonah) and put him in his activity seat. But look at this picture . . . look who’s not watching it and who is! LOL 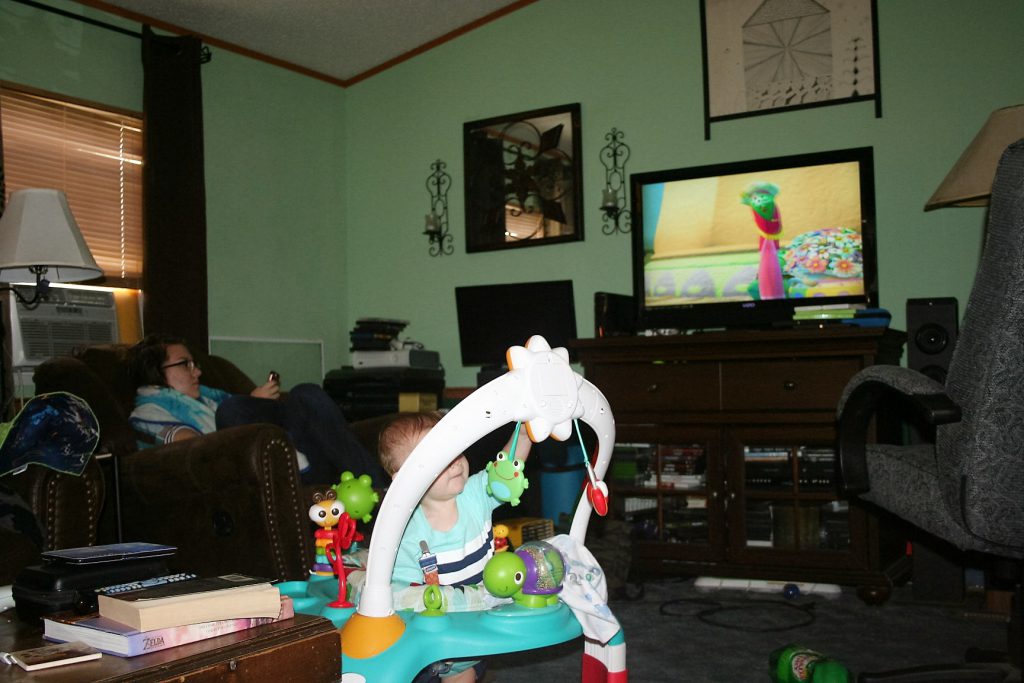 He finally calmed down and enjoyed playing until hunger struck. 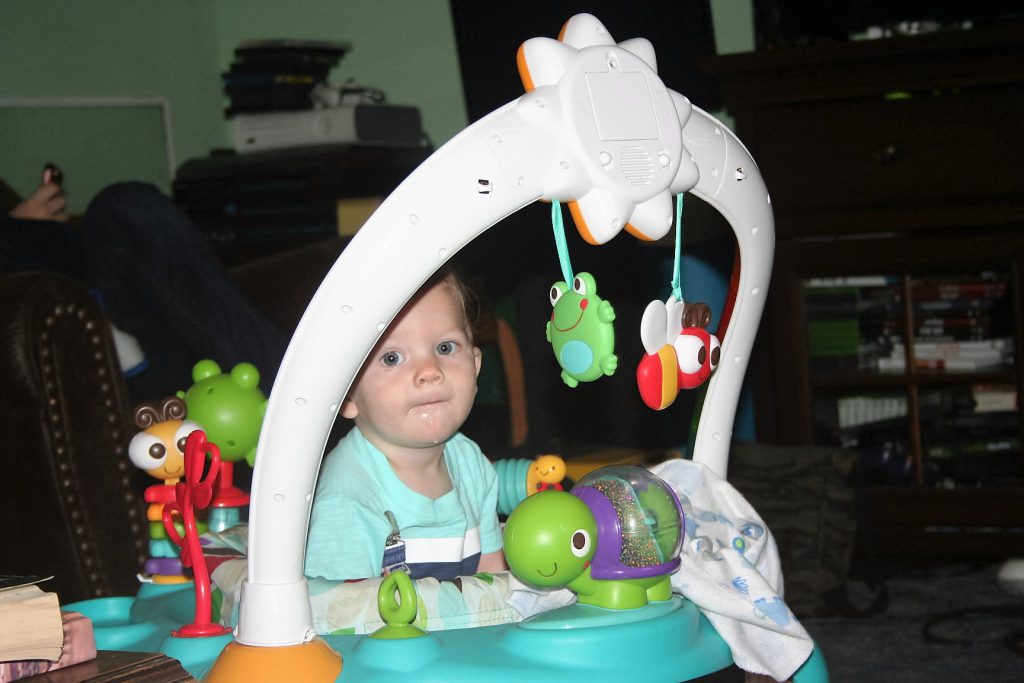 After eating, I let him play outside of the seat for a bit, until nap time. Such a good boy. Yeah, I know, proud grandma! 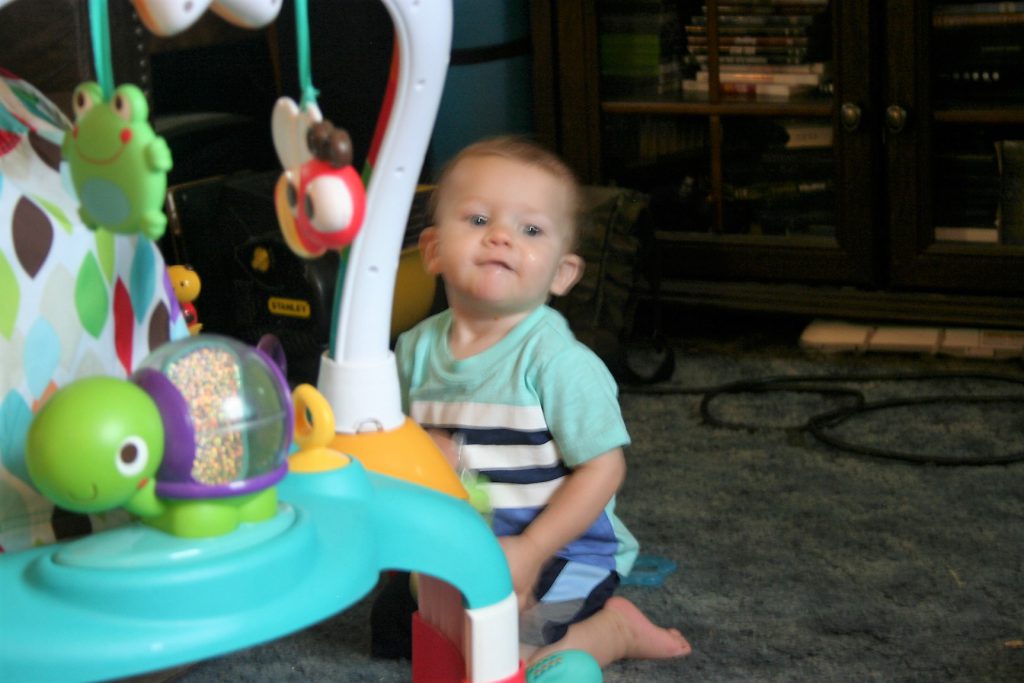 It’s been a long time since I’ve ran errands with a little one, but we will conquer.

Yeah, he kept me pretty busy most of the week, a good busy. That boy can eat! Loved him some bananas and grapes. The only thing he wasn’t too hip on was the avocado. I guess it wasn’t ripe enough for his liking.

I got behind on my Bible reading plan. It was a good thing I was ahead a day because I ended up getting a day behind somehow. So I did catch up but didn’t manage to get back that extra day. Maybe this weekend, but probably not, unless rain keeps us from running to the storage unit and getting some of the kids OLD toys so Liam has some new ones to play with.

Gamehouse came out with a new Delicious Emily game. I don’t know why I like those so much, but I do. It is a time management game revolving around food/cooking. I missed its release until it had been out a few days but then I saw some people were having issues with black screens and slow play, so I waited. Then yesterday I saw they had fixed it and so I bought it but before I checked out, I noticed their coupon code box. So I googled for a coupon and found one for 50% off that day only!

Well, I hope you have a great weekend. It’s supposed to rain all weekend here, which is always nice because we get some good rest and video watching in and I’ll get some game playing in as well.