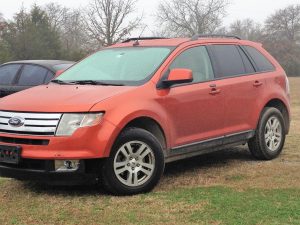 Last week after running errands, the car had overheated. So Sunday on the way to church, we dropped it off at the mechanics. This caused me to have to cancel a meeting I was supposed to have on Monday but it turned out to be a blessing because now the meeting is at a time I am already in town.

A few days later it was ready to pick up. Thankfully there didn’t seem to be anything wrong with it. While it was there, we had him do the scheduled maintenance on the new transmission. I rode in with Mike on his way to work and we stopped at the mechanic’s so I could get the car. I drove it home and then Tiffany and I went into town to run errands.

She needed another new dress, so we did some dress shopping. We struck out at Ross but found one at Burlington Coat Factory. It is odd because the two dresses that fit her nicely this week were VERY similar to the two we got her before Easter. Anyway, we got her a pair of flat sandals to wear with it.

Then we were off to Sprouts. They had 25% off on all their vitamins. There were free things to be had and special deals. One of the representatives that was there was for siddha. I had never heard of them before. They are a company that makes homeopathic remedies from cell salts (whatever that is) and flower essences. They had a GREAT deal on them so I thought we’d give it a try. I bought one for emotional stress and one for improving sight. We’ll see.

This weekend is the Oklahoma Christian Home Educators Consortium Convention. Unfortunately there is NOT one in our immediate area this year. Tracie, my sister, decided to go to Oklahoma City to attend and said I could share her hotel room and ride with her. So, I’m going! Well, actually, we are here already because we have to be at the convention center about 8am.

I hope I remember to take some pictures to share next week but we all know I’m not very good at that.

We checked-in the hotel about 7pm and then proceeded to take a trial run to the convention center so that we would know what we were doing the next morning. We discovered that parking will be interesting but at least we had an idea of what to do and where to go.

It’s going to be a full couple of days and Tracie and I are excited to be spending some time alone, away from all other responsibilities.