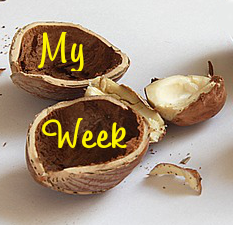 Friday is here! I’ve cycled through each of the daily categories. Some were more challenging than others and some challenges proved to be tougher than I could rectify this time around but I will keep working on it until I figure it out.

It’s been an interesting week. On Saturday the guys increased our internet antenna a couple dozen feet in hopes that we will have better reception – so far, so good. It was pretty hot though and it zapped their energy for the rest of the day.

While the boys were on the roof getting things started, Mike was at the furniture store purchasing a new living room sofa and recliner! Whoo Hoo!!!! Praise God! We went to that store on a date night last fall. Mike got one recliner for me right after Christmas, but it was nice to get the rest of what we looked at nearly a year ago. AND, while Mike was gone to get the furniture, we girls (my daughter Tiffany, my daughter-in-love Lauren, and I) took apart the old sofa, moved it into the “library”, and reassembled it . . . a great feat, for which we felt very accomplished and proud of ourselves.

Sunday we came home to lunch in the crockpot and I learned another way NOT to make Baked Ziti.

But I do have another idea and will try again in a few weeks; at least it was edible and the drop biscuits Tiffany made helped cover up the overcooked pasta.

Unfortunately, I didn’t get the work done on my website that I wanted to over the weekend and ended up scrambling several times this week. Just last night, I scheduled the post for publishing and this morning, with limited internet connectivity because of the thunder storm, I saw that something happened and it didn’t publish. You see, I had to turn off the internet that the guys worked on Saturday, because of the storm, as leaving it on when there is thunder and lightning can fry the chip and leave us with a hefty repair. AND because of the storm/cloud cover the satellite internet kept resetting. I finally got connected and then after another reconnection, got it published. So that explains the late publishing of the post yesterday morning.

I like Mondays because Tiffany cooks dinner and Sean cleans up thus giving me a day off. She made a wonderful meal that we just couldn’t seem to get enough of; I’ll probably be sharing it within the next several weeks.

I love Lauren, my daughter-in-love. She admits that she is a picky eater, consequently  I feel quite accomplished when she tries something here that she doesn’t normally like and ends up liking it. I’m always very proud of her when she goes outside of her comfort zone to taste a known offender.

Recently Tiffany and I fixed homemade egg rolls, which Lauren doesn’t like; she tried a bite and resignedly looked at her husband, my Brian, and simply said, “Really?!” and she reached forward and grabbed an egg roll and proceeded to eat one and a half! Whoo hoo! Yay Lauren!

I can usually manipulate graphics pretty well, but they are beating me this week, where this website are concerned. I will eventually get them conquered but until I do, please bear with me and the way the graphics are looking. Once I figure this background transparency out, I intend to go back and fix this week’s pictures.

For the second week in a row, Tiffany and I have gone out to the van to leave to run our weekly errands and the battery is dead. It appears that I have not properly taught her how to ensure that the ignition is turned off completely. Our van key will come out of the ignition even when the van is running, so it can be a bit tricky.

Last Saturday when I was getting ready to prepare dinner, I couldn’t find the turkey sausage. So I sent Tiffany out to the van to see if we’d missed a bag in our soggy state, having been rained on while out. She found it with her nose first! So she got the keys and opened the windows a bit to air it out. She was very careful to jiggle the key, just like I showed her, to ensure that it was indeed, turned off. Unfortunately that is what I taught her to do when it ended up draining the battery.

Oh well! I hope I don’t need to say it, but I will anyway; I have rectified this situation and she now knows the key must be lined up with the notch by the key to ensure it is in the proper place and not drain the battery.

Now, I wonder if you caught the fact that Tiffany rolled the windows down a bit to air out the van AND that we JUST found out about the error TODAY. AND I mentioned that it RAINED over night. Are you putting all these things together? If you have, you will probably not be surprised to know that when I got in the van before finding out that the battery was dead, my pants got wet. Yes, it added so much to my joy!

So, I sit here writing this blog post when I should have been in town running errands. But I’m ok with that, as I got to catch up with a sweet friend with a phone call that I would have missed otherwise. I went out to see if the battery had charged enough to start but alas, it had not and then it dawned on my “lightning fast mind,” if I ask my hubby to bring home some cheese for the fajitas I planned for dinner tonight, we won’t have to go out this afternoon. You see, it takes my daughter and I about 3-4 hours to run our errands, partly because it is 30 minutes travel time, one way and partly because we don’t really like to rush and thus make the task unenjoyable.

Well, that’s my week, in a nutshell (Well, maybe I was a little verbose for a “nutshell.”

. I’m hoping for a better, more productive one next week.

Until next time, have a great weekend and God bless,