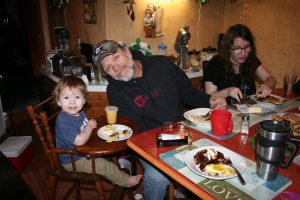 When our children were young Michael and I arranged a way for me to know when he was headed home since it varied daily being self-employed. When he texted that he was on his way, we stopped what we were doing and the kids tidied up while I began making dinner. He is always ready to eat when he arrives.

Years later when Brian went to Central Tech, he got home after Michael; it continued when Sean went there and then on into them getting jobs other than working with Michael. This threw a wrinkle in our eating schedule but because we have always eaten together as a family, at the dinner table, we changed our dinner time and I generally try to have it ready to put on the table when the last one arrives.

Recently when Michael arrives home a couple hours before Sean does, he is still ready to eat something and I’ve tried to have some kind of snack or snack suggestion ready for him. Some days Tiffany and I have just had our afternoon snack and will make him a portion as well. Some days I make him a shake, cut some fruit, or suggest something else.

In the early years, Michael didn’t really have breakfast except for coffee and maybe cereal or some kind of bread, toasted. Lunches he’d just grab quickly at some convenience store or fast food place. When we decided we needed to tighten up on our spending, I began making him breakfast at home and lunches to go. This saved on our budget and was way more nutritious for him. Today I make him breakfast, generally eggs of some kind, and pack him a lunch. I also try to include at least one snack for him to eat between lunch and heading home.

These things don’t take much time, saves us money, and let’s me love on him a bit.

If your hubby comes home hungry, I encourage you to plan ahead and have dinner ready when he gets home. On the Trim Healthy Mama lifestyle of eating, that means that sometimes I have to have a fuel pull snack in the afternoon so that it won’t hinder my weight loss efforts if dinner is closer to snack time than 3 hours needed between meals.

I hope this post has given you some food for thought on considering your husband’s eating schedule.