As things turned out last week, Michael’s van decided to be finicky and not start on my errand day. So, he had to take the car, which was okay by Tiffany and I since we didn’t feel like running errands anyway.

Michael stopped at the store and picked up some essentials, so that we could make it through the weekend.

But I decided that we could actually make it until Wednesday, which was the last day that Sprouts had their roasts on sale for $2.88 a pound. That is a great deal here and I usually like to get one each week of that sale, so I got a couple this week.

The last one we had was really good.

I cannot believe it is already March! Tiffany and I had our monthly check-in with each other. I like this because it gives us each someone to talk to about how things are going and set goals for the month. Some of those goals are based on the challenges of the previous month.

We could not justify spending any money to eat out this week since we chose not to do this on errand day (and my gift cards were depleted) so I decided to make something special for us. Ham and Cheese Scones! Only problem is that we really needed to have our meeting early in the day rather than around lunch time, so we chatted after breakfast. 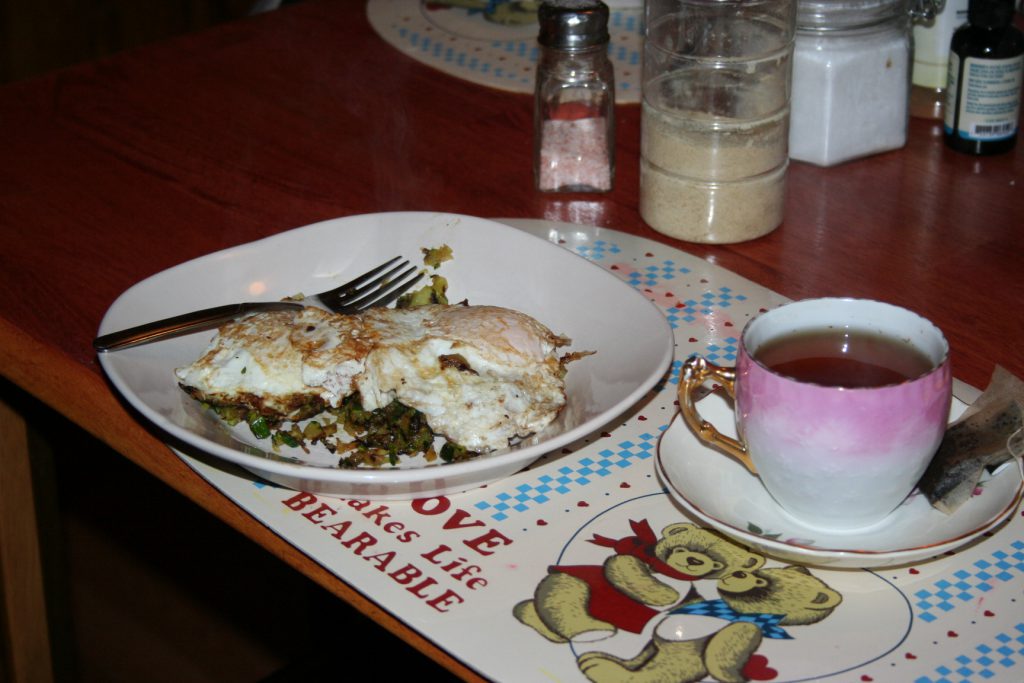 I fixed us eggs and zucchini hash and Tiffany fixed the tea. I got down some nice cups that I either got from my mom or one of my ancestors.

I love them; they are so pretty and dainty. I did douse those eggs with nutritional yeast after taking this picture.

Tiffany and I both took notes in our bullet journals(bujo) as we went. We paused to draw some rectangles to fill in the beginning. Then later I made some notes on some sticky notes on how I want to design my next month bujo pages. 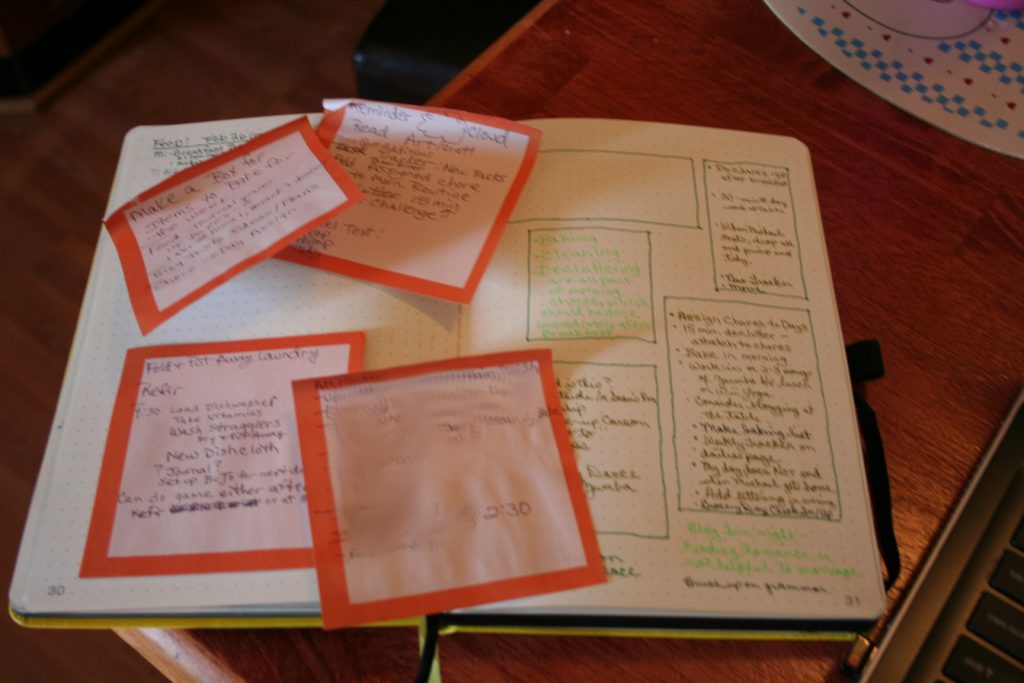 I’ll pretty it up later but I like how it turned out and I don’t have a bunch of meeting sticky notes to make pretty. Those sticky notes are my brainstorming schedules, routines, and bujo pages.

One of the things on those sticky notes is about habit trackers. Mine did not work very well last month. See. 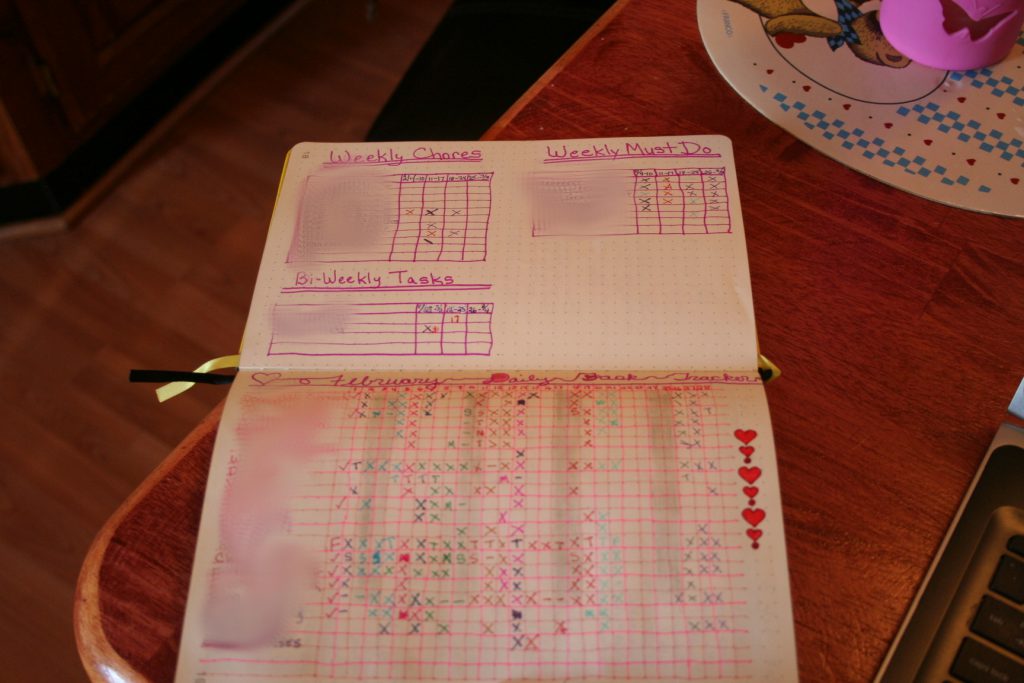 Notice all the squares without x’s? Well, there should be very few of those. The only reason there are x’s on the Weekly Must Do tracker is because that is all about the blog daily posts and I have to do those or not blog.

I’ve got a plan though, so I’m encouraged. That is one thing I like about a bullet journal, when something doesn’t work, change it. If this were a planner, I’d be stuck for the whole year.

Unfortunately I did not implement a lot of the things I wanted to last month. I’m referring to those things that I planned to do at the first of February. I have learned some things about myself through this. A tracker or list does not encourage me to accomplish a task. But a reminder and attaching a new task to an existing task works quite well.

With that in mind, I’ve revamped my morning routine, to accomplish some of the goals I set with Tiffany yesterday. I’m looking forward to implementing some of these changes.

I still made the Ham and Cheese Scones from AllDayIDreamAboutFood.com and they were quite yummy. I may play around with the flours a bit to lighten the calorie load so that we can have two without feeling like we overindulged. 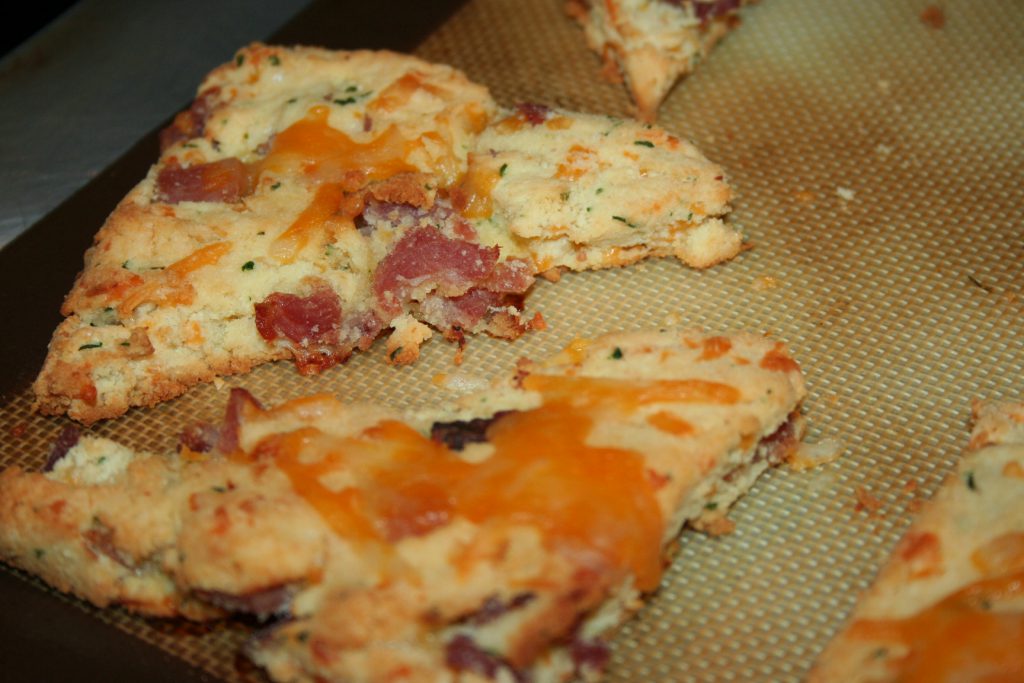 They were delicious! We had them with a small side salad and a “after work-out” shake. They tasted sooo good we both still wanted another one.

I’ve sent out a question to the THM groups to see what they think about how many can be eaten in a sitting.

Well, I’ve rambled on long enough for today. I’m excited and hopeful for accomplishing many things this month. I hope you are too.