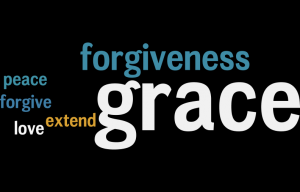 It is hard to be the one who extends grace to someone. It means forgiving. It sometimes means giving up your right to be right. It is not easy some times. BUT I must admit that being the recipient of grace feels very good.

It is in my nature to remember the times I have given grace and been forgiving and forget the times I’ve needed it. I think it is probably just human nature to think the best of oneself and that is why it can be so hard to admit our own wrongs.

I just kept forgetting and then I’d run across the re-order form and remember but it was always at a point when I was busy doing something else. I know, defending myself, once again. Ugh!

Well, Mike was home while Tiffany and I were out running errands. He called me looking for the checks, completely forgetting that he had run out and had asked me to order them. He was looking for them, trying to figure out where I had put things when I de-cluttered. I then had to admit that I had failed to order them. I waited . . .

And then he told me it was no big deal. WOW! What a relief! I was so thankful! It encouraged me to be just as gracious to him in the future.

I encourage you to extend grace to others and hopefully one day, grace will be extended to you as well and then you can feel the relief of such an act.