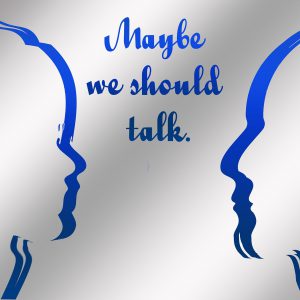 Michael and I are very different in a lot of ways, which has helped us grow individually into more rounded people. I have definite opinions about lots of things and when Michael’s opinion is opposite mine, clashes are bound to happen. There is nothing wrong with the clash as long as you are staying on topic and not resorting name calling and such. The conversation should be about the topic and not switch to being about your spouse, to where he/she feels attacked, disrespected, and/or unappreciated.

It is also alright to postpone a discussion for later, if it is becoming too heated. Find a way, to lessen the tension and agree to think on the subject some more and talk about it again later, be it in a few hours, days, or even next month.

Another important thing to remember is to reconcile to your spouse quickly, and I mean within minutes, when a disagreement has gone too far. If you have said something hurtful, even though you believe that what you said was true, you can apologize for the way in which you shared your feelings.

You can tell him/her about something he/she is doing that bothers you without throwing it at him as an insult or being hurtful or spiteful.

In the last instance, you could sandwich it with, “I appreciate you working so hard on your job and doing a great job. But I feel unappreciated when you don’t let me know you’ll be late getting home. You’re such a good man and I’m so thankful for you.” Something like that takes the sting out of the critique.

Now you might be thinking that it sounds like a great idea but . . . I agree totally. I’m very bad when it comes to praise, ask any of my family members and I’d bet they’d readily agree but it is an area I’m working on because I know that everyone flourishes when they know they are appreciated.

So when Michael does something little, like rub my back or bring me a glass of water, I am sure to thank him and let him know he’s wonderful.

It is important to reconcile your differences quickly, so that you give no place for the devil to work. He’s already working to undermine marriages and cause families to break apart, don’t give him an easy target. Be quick to forgive and move on, not taking account of wrongs done to you.