Laura is being rather easy on me with these diva challenges so far this month, for which I am grateful.

As I mentioned last week, I too am participating in Inktober, although I’m not working in many of their prompts but I’m okay with this.

Basically I’m following Stephanie’s tangle prompts, as is Laura. That is the one thing that I seem to be getting done in each day’s drawing. Some days I get the Pattern-Collections prompt in as well. The same goes for the doodlewash prompts.

It’s been nice to actually fill in the spaces on my Tangle-a-day calendar that I got several years ago and just did not follow through with.

I didn’t get pictures of the entire page before it got dark last night, so I’ll have to settle for these individual pictures I posted on Instagram.

On the 9th the tangle prompt was Fe-Ba which I had never done before and I must add that I did not do it correctly.

I should have skipped every other diagonal. Oh well! 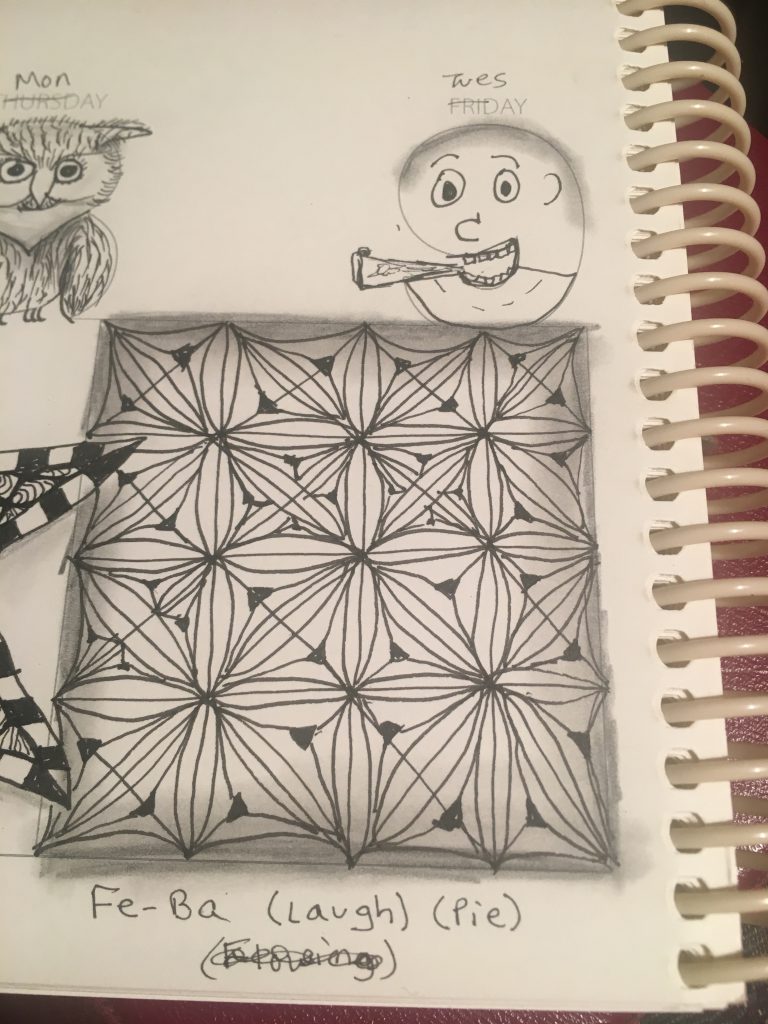 The pattern-collections (p-c) prompt was laugh and the doodlewash prompt was pie. The inktober prompt was precious and unless you just call this finished thing precious I don’t think that one worked into it.

Since it was the 9th, I used that for my laughing face and then attempted to draw a slice of pie headed into its mouth.

On the 10th the tangle was Sez, inktober prompt was flowing, p-c was violet, and doodlewash was nuts. I figure the sez tangle could kind of look like nuts and they were all flowing into one another. If I’d have thought a bit more about it, I’d have used a purple pen but alas, I didn’t. 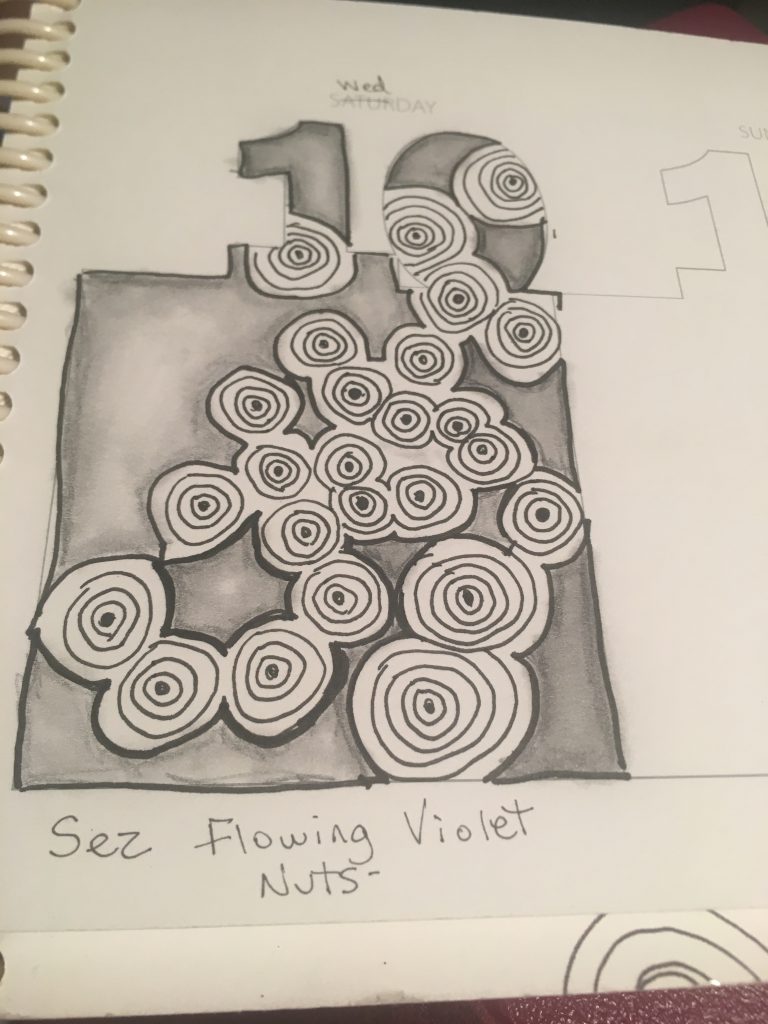 On the 11th the tangle was Copada, with cruel, flower, and clouds. Well, once again the Inktober prompt of cruel doesn’t seem to make it into my inking but I think the others make an appearing. 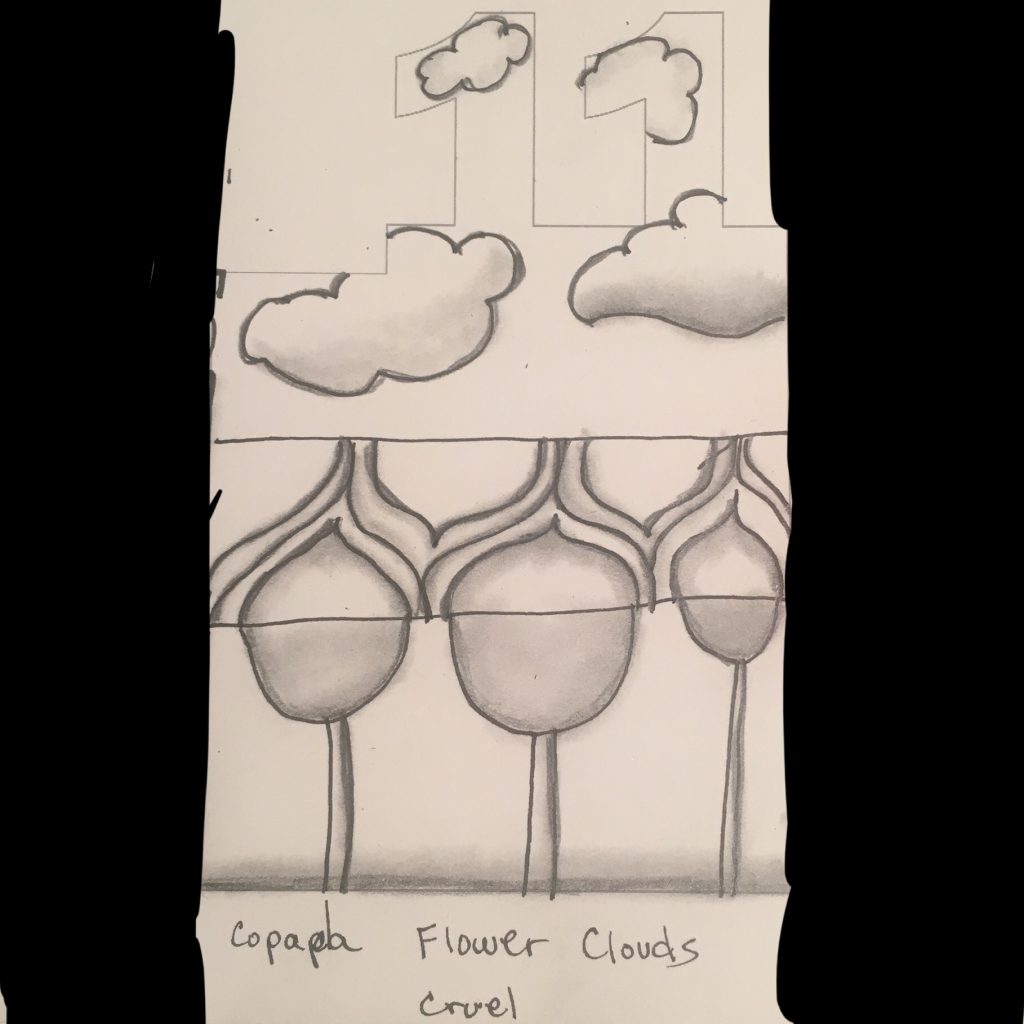 I like including the number into my tangling when possible.

I think the 12th is one of my favorites so far. The tangle was Heartswell, with prompts of whale, red, and spices. This time it was the doodlewash prompt that didn’t make it. For the p-c prompt red I decided to use a red watercolor pencil after inking it. That did not turn out very red, so I got out my distress ink marker in candy apple red and love how the left side of heartswell turned out. 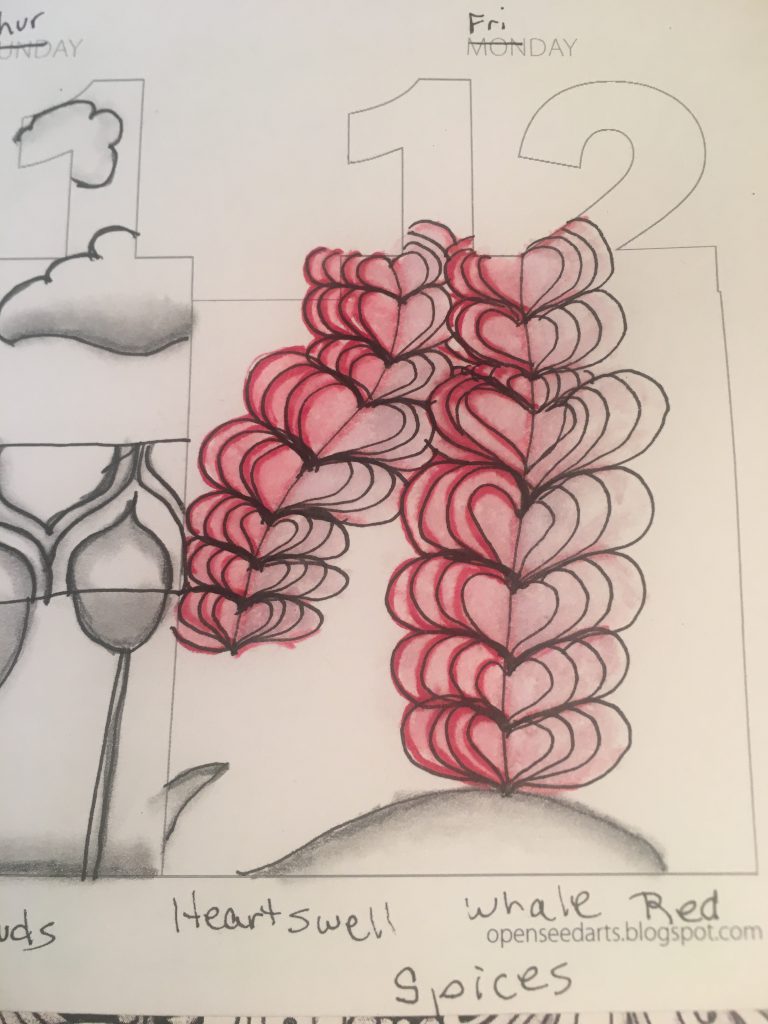 Now we come to the 13th, which is Dewd and the Diva Challenge for the week. The prompts were guarded, view, and trees. I guess this could be interpreted as any one of them. 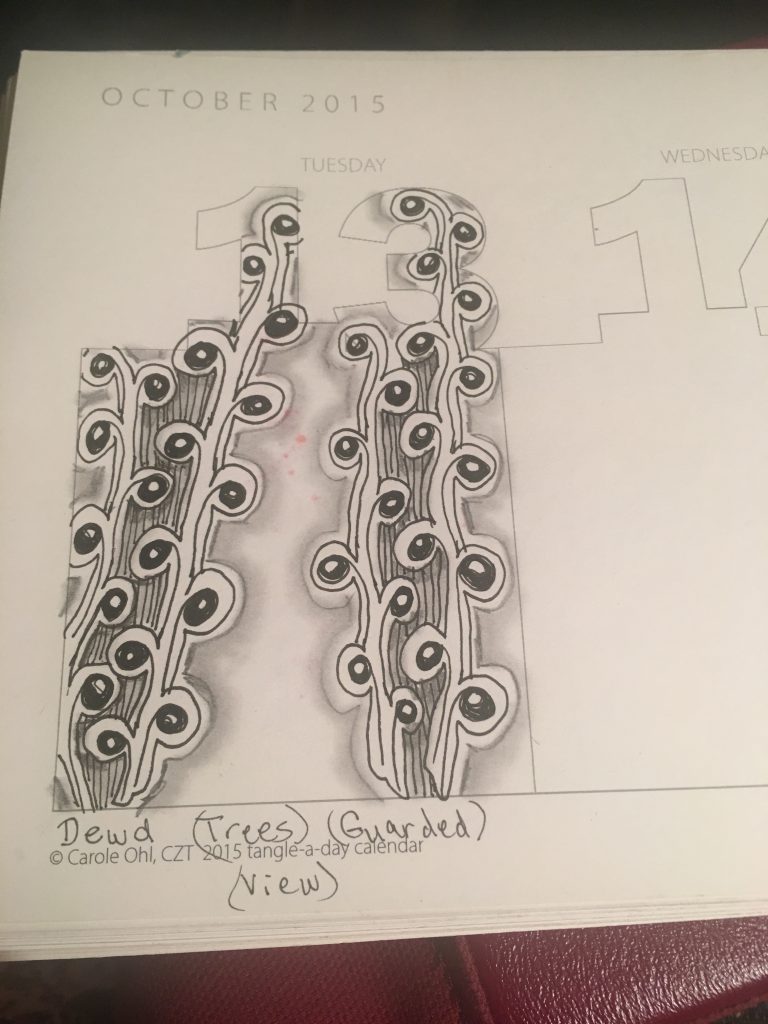 Dewd and I are not the best of friends yet but I do like how I worked it up into the numbers.

Sunday the 14th’s tangle was Ando with clock, dancing, and cider. Inktober prompt of clock was easy to work into my tangling since I chose to draw ando in a frame. 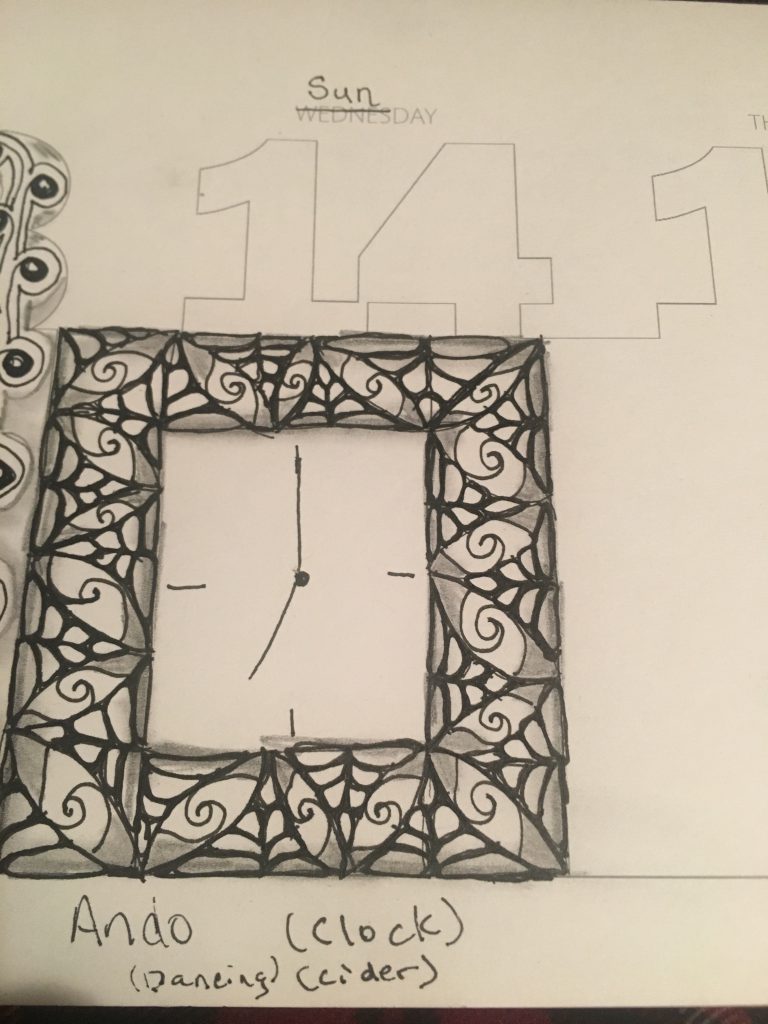 On the 14th the tangle was Inapod with weak, Hope, and Hay as the prompts. I ended up just tangling inapod, which is quite alright. 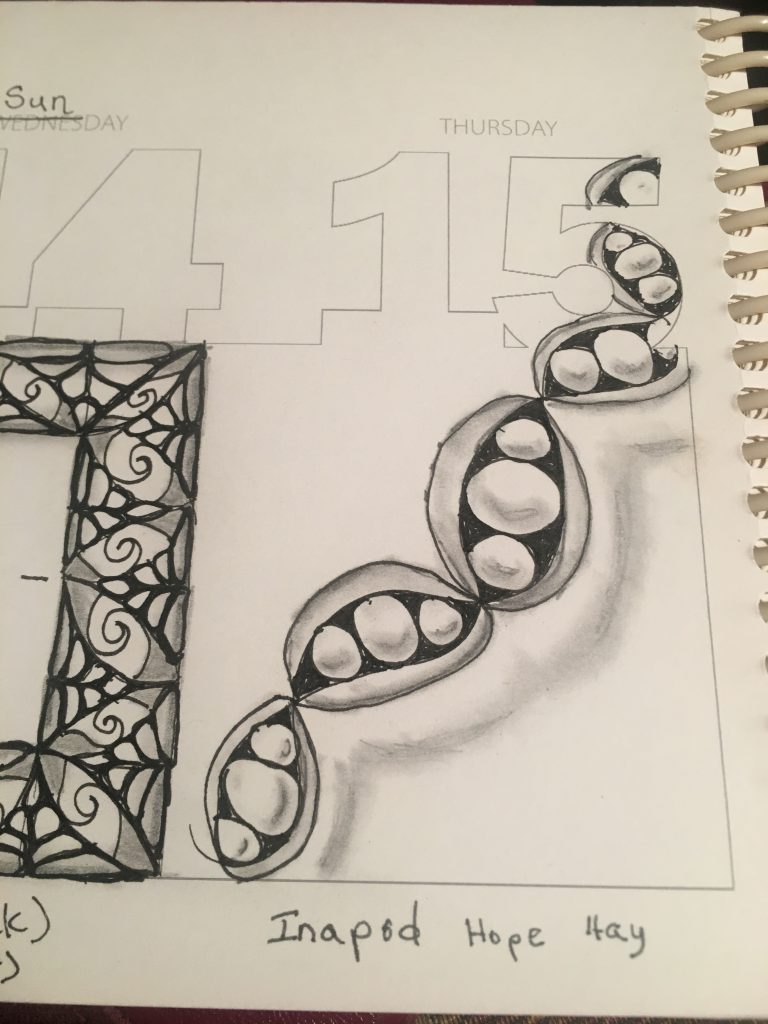 When I shared this one on instagram I accidentally labelled it as joki because I was putting up the next one at the same time.

I think that’s enough for today. Have a great week. We shall, as we will be celebrating birthdays this weekend so I get to see my married son, daughter-in-love, and GRANDSON.