I was unable to participate in last week’s challenge because I was on a family vacation, on a cruise with no cell phone service. I did take all of my zentangle supplies with me but did not do a single tile. I’m not sure what I think about this yet but will take them along again next time because you never know exactly what you will feel like doing on a vacation.

(I did post some zia pieces though, while I was gone.)

This week’s Diva Challenge is a guest post by Paula Bramante, Stones and Ceremony. I got a bit lost on all of the words and lovely stone pictures on the Pinterest board and decided to just use the cairn template as my string.

As I was drawing the string, I ran out of room and modified it a bit thus using fewer ‘stones’.

Next came the task of picking tangles. There are soooo many options that it can sometimes get a bit overwhelming. I haven’t used Kuke in a while and even forgot the steps but still wanted to use it on top; so I looked it up on tanglepatterns to refresh my memory.

Nipa came to mind next, so in it went. It kind of looks fossilized, the way I shaded it. I wanted another line tangle, so I used static for not other reason than I thought of it.

The my friend ‘Nzepple! I really love this tangle.

I was a bit stumped by this point so I opened up my Tangle Library app on my iPhone. Wabi was my next choice because it had a lot of white space in it and I didn’t want my ‘stones’ to get too heavy. Circfleur was chosen for the same reason. Yincut is next without much texture shading too it. Once again, I was trying to keep it from getting to dark and heavy so I stayed away from the shading that makes yincut seem tufted or puffed.

I finished it off with Ava, also found on the Tangle Library app. I filled it with lines instead of swirls which I don’t like as well coming right after yincut, but it is what it is. 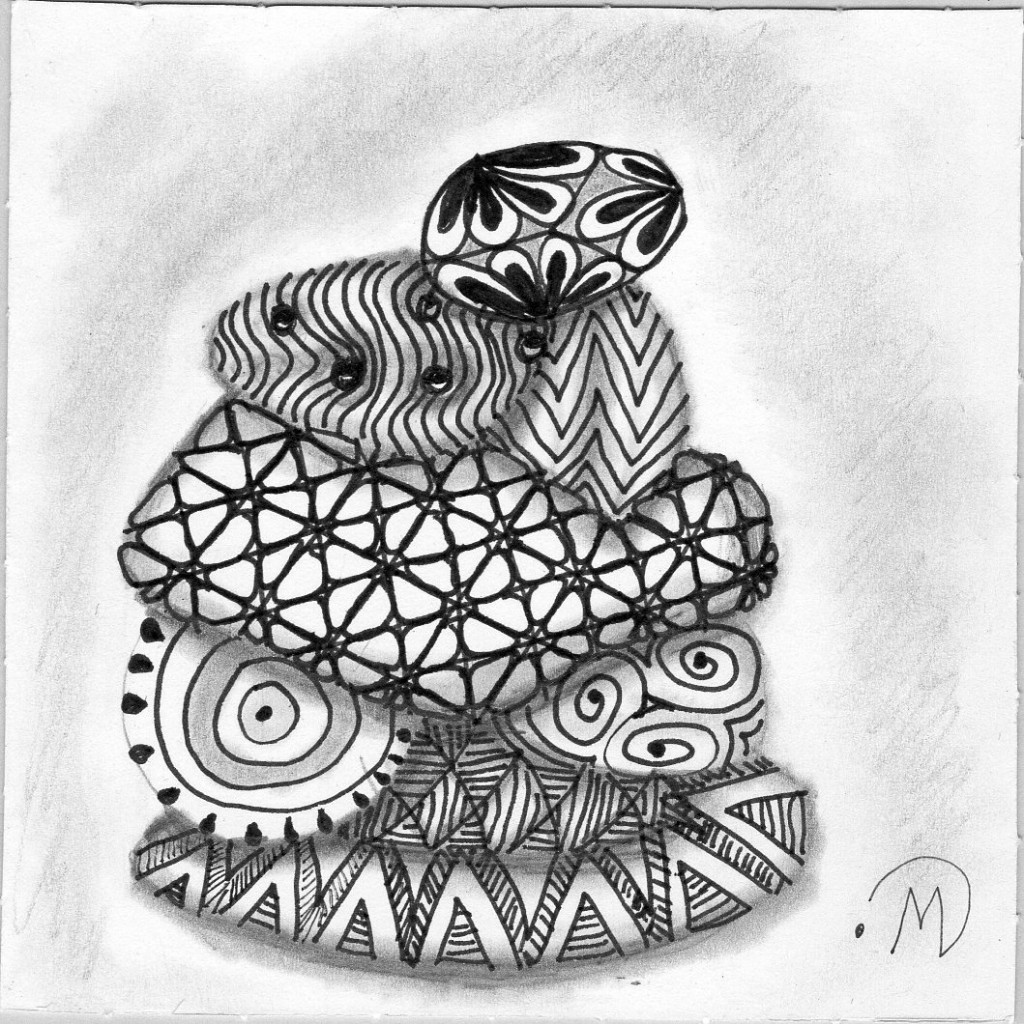 When I looked at it after finishing it, it felt too heavy and centralized with too much white space around it so I added the aura-like shading around it and liked it much better. I could have spent a lot more time shading this, to create more depth and layers but had other things to do, so I stopped here.

Thanks for stopping by and seeing my submission to the challenge. I appreciate those that take the time to leave comments or click the like heart below.