This week’s Diva Challenge is brought to use by Holly Atwater. Her challenge is to either use one of her Audio Zentangle Meditations or use Betweed in a piece. Well, since I have already done the audios, I knew I needed to do a tile with Betweed and that would definitely be a challenge as Betweed and I are not very good friends.

I started out by procrastinating.

Then I looked at Maria’s examples again and re-watched her video. Inspired by Maria’s unusual string in the video, I went a little ‘crazy’ with mine. I like the string but probably should have done betweed in several ‘columns’ like she did in one of her examples.

There was an orb on the bottom right corner of the border that just screamed to be filled with one black pearl which I learned how to do when I did Holly’s second audio and was glad to use it there.

The upper left corner seemed odd, so I threw in eke. Eke is not a tangle I gravitate to either and I’m not even sure it fits here. 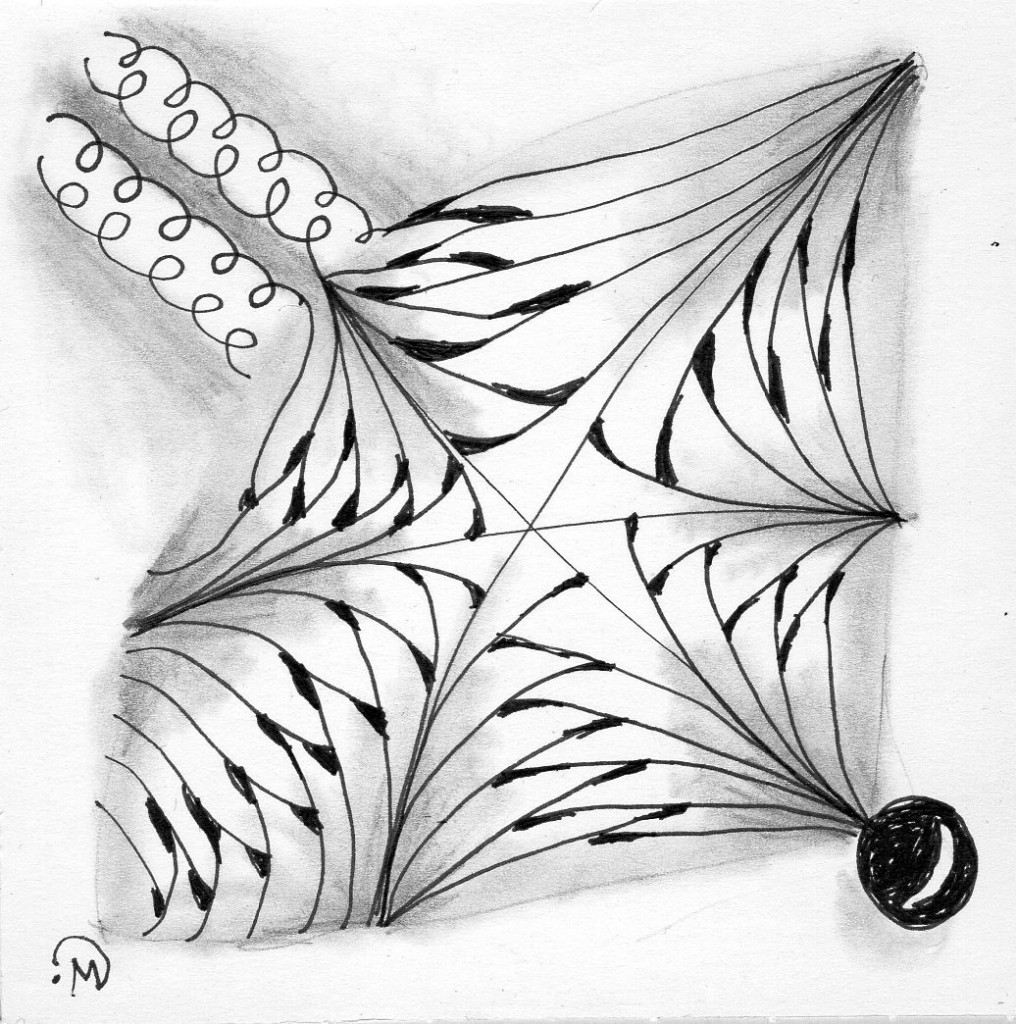 I have a hard time ‘weighting’ the lines in betweed as is clearly evidenced by this large view.

So from this angle, the finished tile kind of resembles a spinning top but when I rotate it 90° it kind of, somewhat resembles a kite with eke as the tail. I don’t know . . . but I did rise to the challenge.

Now, I want to thank Maggibee, Annemarie, Antonine, Ulrike B, Lily, and Yukari for taking time last week to leave such kind encouragement on my diva challenge tile and my zia for Exodus. It was really appreciated! (And a thank you to the one that clicked the heart icon!)

It dawned on me when I read a few comments that Exodus had several undulating tangles in it. (Sometimes I can be a little slow. haha) I only picked those tangles because they began with the appropriate letters and followed the theme I was looking for. I rarely use tangles like that.

For those who have nearly given up on showgirl, this video on youtube is what really helped me. I viewed it several times. Attempted to draw it. And viewed it again and practiced while pausing the video. As with so many other tangles, the shading really makes a huge difference on this one.

Well, that’s all for today!