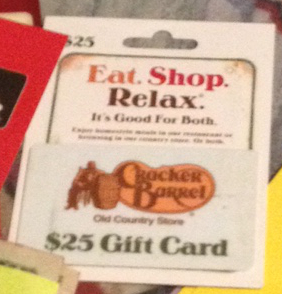 Well, we finally did it!

These two homebodies finally got out alone for dinner. Of course, it helped that we needed to get Mike’s work van to the mechanic’s place by Monday and that I gave him the tin of gift certificates for Christmas. It was also the twenty-seventh which is the date of our wedding, so a very good day to be out alone together.

He was concerned that some of the cards would not be enough for both of us to eat. Thankfully I had some more money saved and added bit to each one after he voiced his concerns. We finally settled on dining at Cracker Barrel.

I’ve written about my experiences with this place before, I believe, but I’ll share it again real quickly. Prior to last October, I had only eaten there for breakfast and I wasn’t a huge fan. Then last October, Tiffany and I went to lunch with a group of ladies and ended up there. Since we were trying to eat light and inexpensively we opted for the salad lunch special, which was delicious. We both got water to drink and the salads and were able to get out for $15 and change, which included the tip.

This salad experience gave me hope that Mike and I could both eat there for dinner on the $25 gift card but took a bit of cash, just in case.

I don’t always like to get the same thing Mike gets when we eat out, since he cannot eat beef or pork. This time was different though and we both got the Chicken Fried Chicken which comes with three side dishes. I got the macaroni and cheese, steak fries, and salad, whereas Mike got mashed potatoes, fired okra, and coleslaw. He ordered a sweet tea and I just got water. Our bill came to $23 and change; we left a cash tip on the table.

We were both stuffed!!! In hindsight, we should have split one dinner. We could have each picked on side and then split one side dish. If we were still hungry, we could have gotten a dessert but I think we both would have been comfortable AND it would have saved $10 for another day.

Afterwards we made a quick stop to make a return, an exchange, and a purchase of the supplies for a repair. We also ended up getting Mike a new shirt for church and a movie trilogy that we had just said we wanted to get. I am a slow shopper, trying to ensure I get the best deal. Mike is a conqueror: get in, get it done, get out kind of guy. We compromised.

All-in-all it was a good time. We were only gone for about three hours, which included travel time but it was good. These homebodies don’t like to be out but so long. And we definitely prefer to avoid crowds.

We had some good conversation about us, our future, and what God has for us. It was a casual talk reminiscing prophecies over us and things we feel God wants us to do. It is always good to recall the plans God has for us.

I hope you will have some good times of conversation with your beloved.