So last week when Tiffany and I ran our errands, we decided to take some leftover Creamy Chicken and Wild Rice soup with us in our thermos. It was such a good idea because we were able to eat a delicious THM E soup while shopping! Yay us! 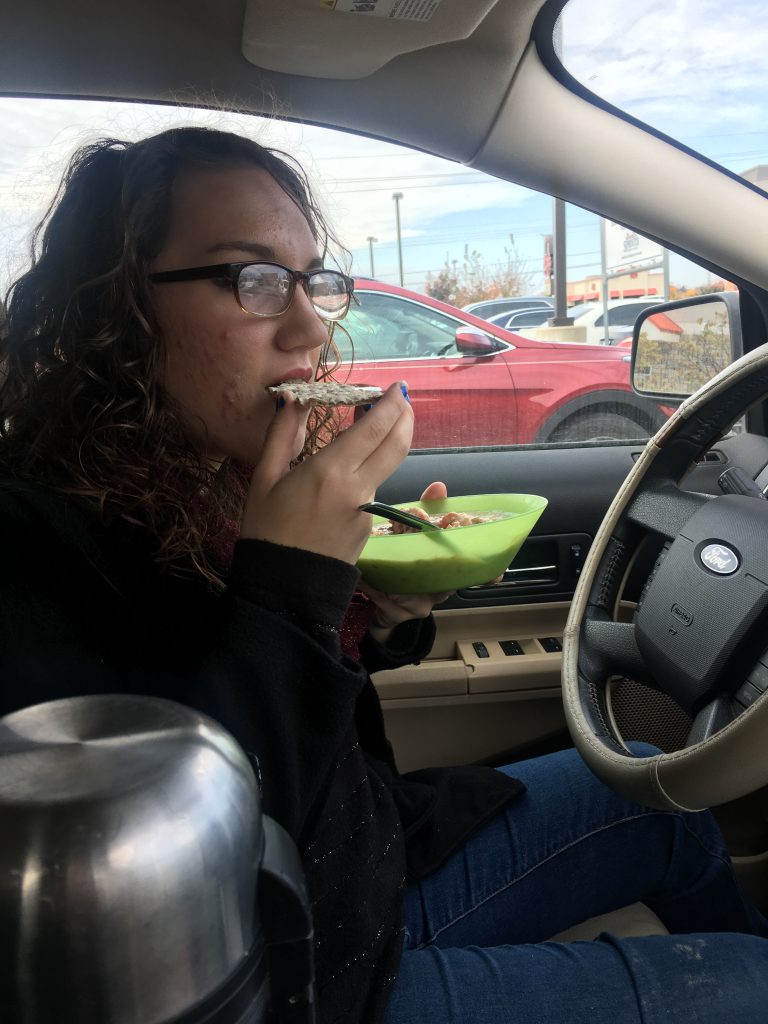 I’ll share the recipe next time I make it. It is really a wonderful soup.

It was nice because it was a bit chilly out, so we could really enjoy it’s warmth.

I had Tiffany take some pictures of the Holiday Bash and the decorations, otherwise, there would be none again. 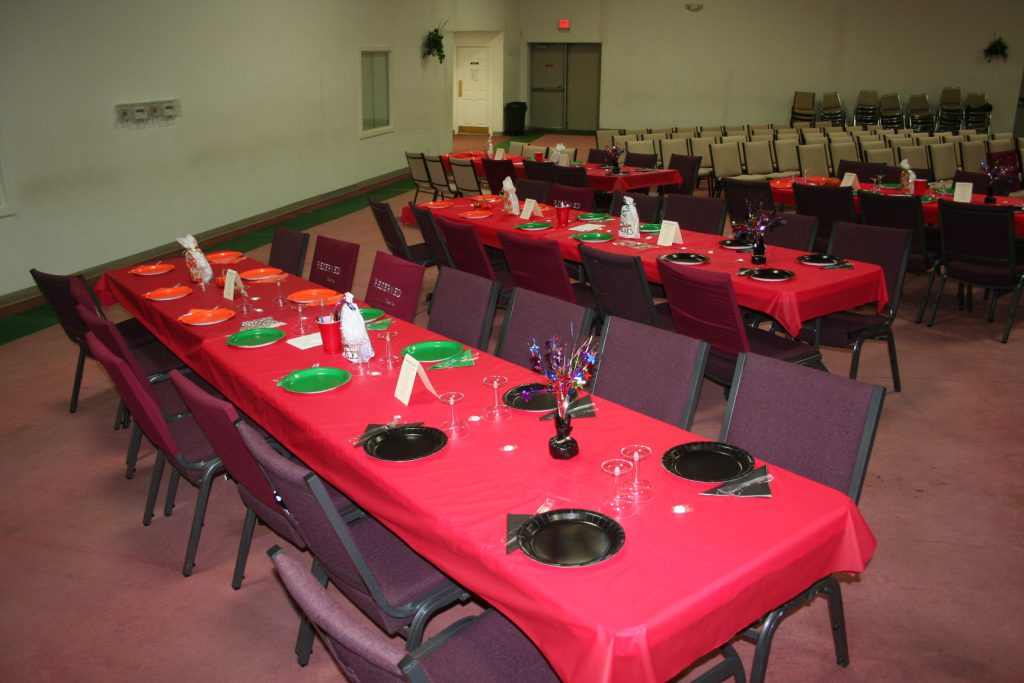 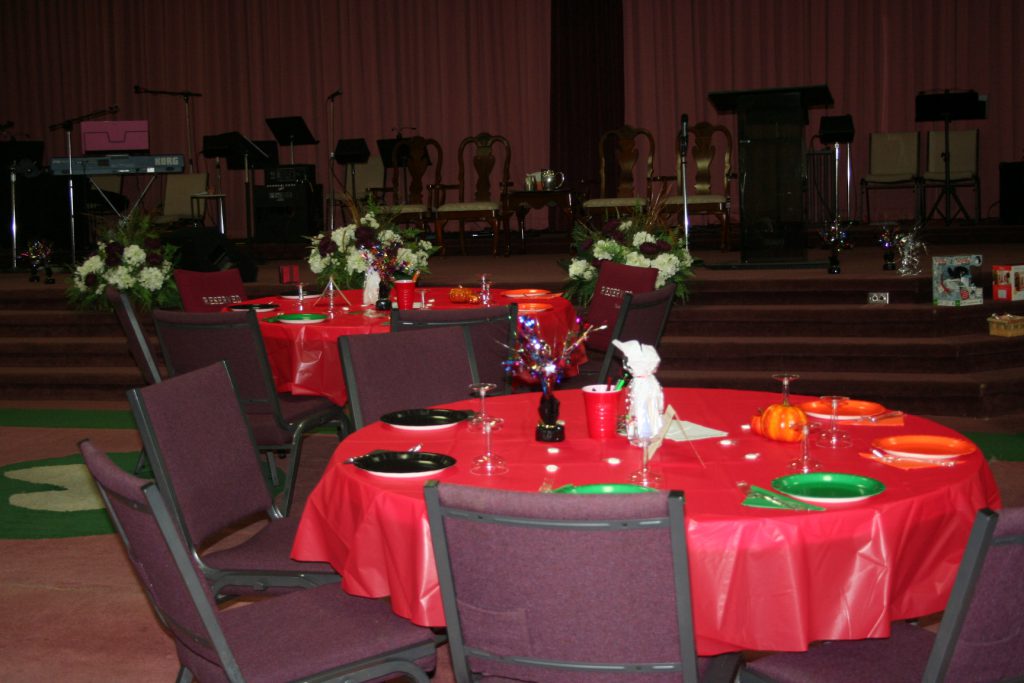 We have a variety of pumpkins on each table at the orange end. 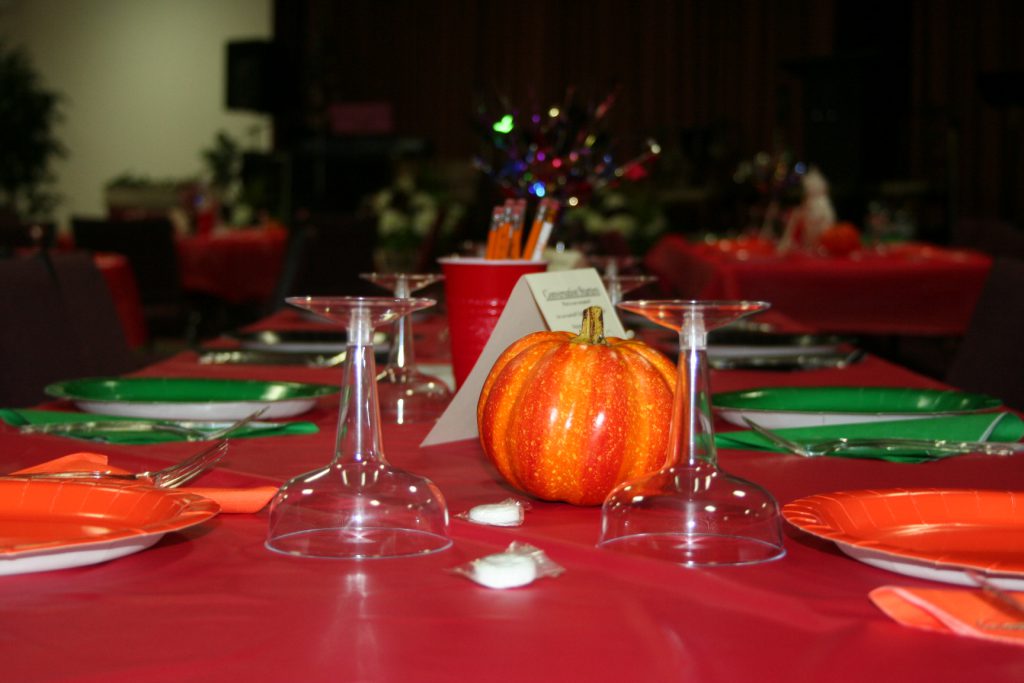 The “goblets” were at each place setting for the New Year’s Eve bit at the end of the night. And then some black balloon weights with foil stars at the New Year’s Eve end. In the middle was a cellophane treat bag with a “present” in it–we put the horns in tissue paper and then in the bag, so kids wouldn’t be making a bunch of noise with them before “New Year’s Eve.”

I had some great help on Thursday to set up the tables and decorate! Thanks Christy, Angie, Sharon, Ruby, Josiah, and Tiffany. You all are great and a huge blessing!

Christy and I brought some decor from home to add to the fun. 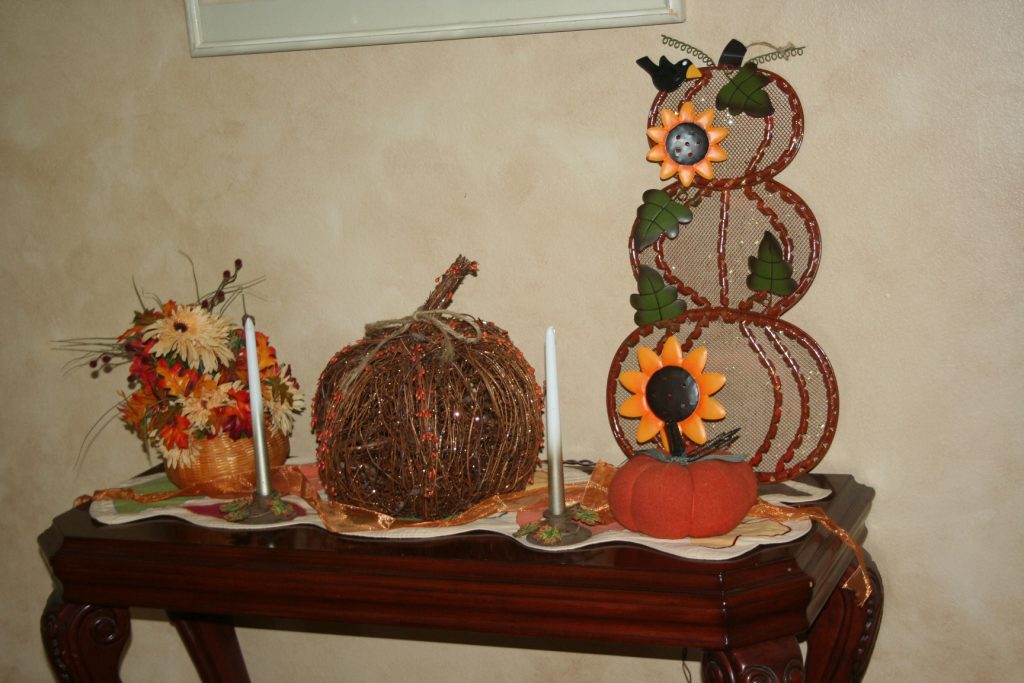 Of course that is the only picture we have of the entry/fall decorations, but at least we have one.

On the day of the Bash, Tiffany and I were at the church most of the day. 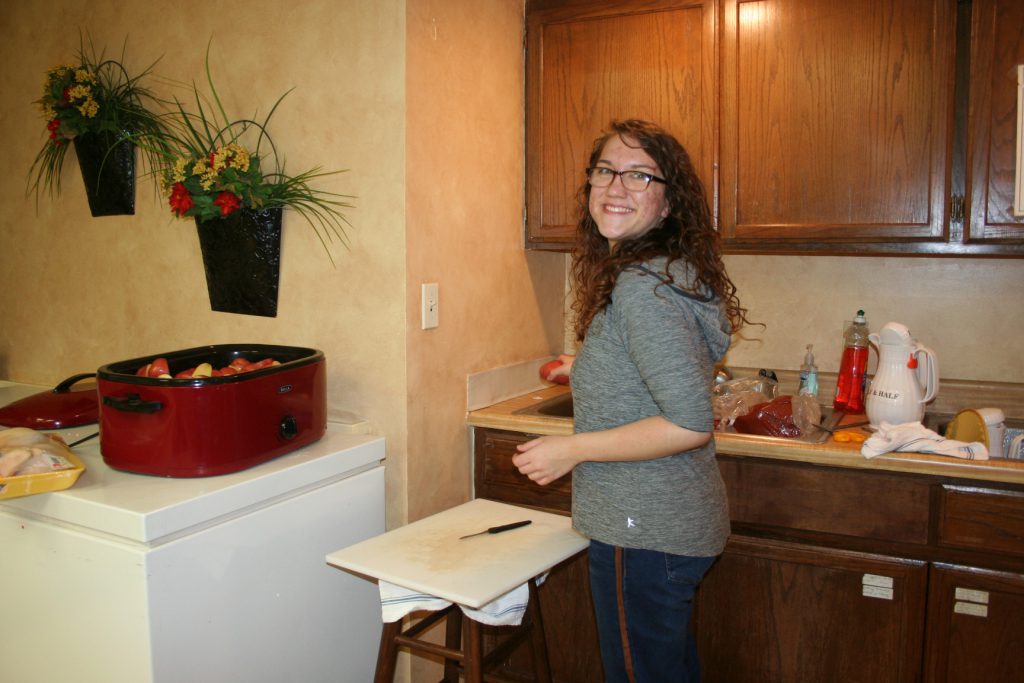 Those are red potatoes in the roaster, which we seasoned with the usual suspects: salt, pepper, onion powder, and garlic powder. We also added a few pieces of chicken to further flavor them.

To keep us moving, we had some tunes playing. 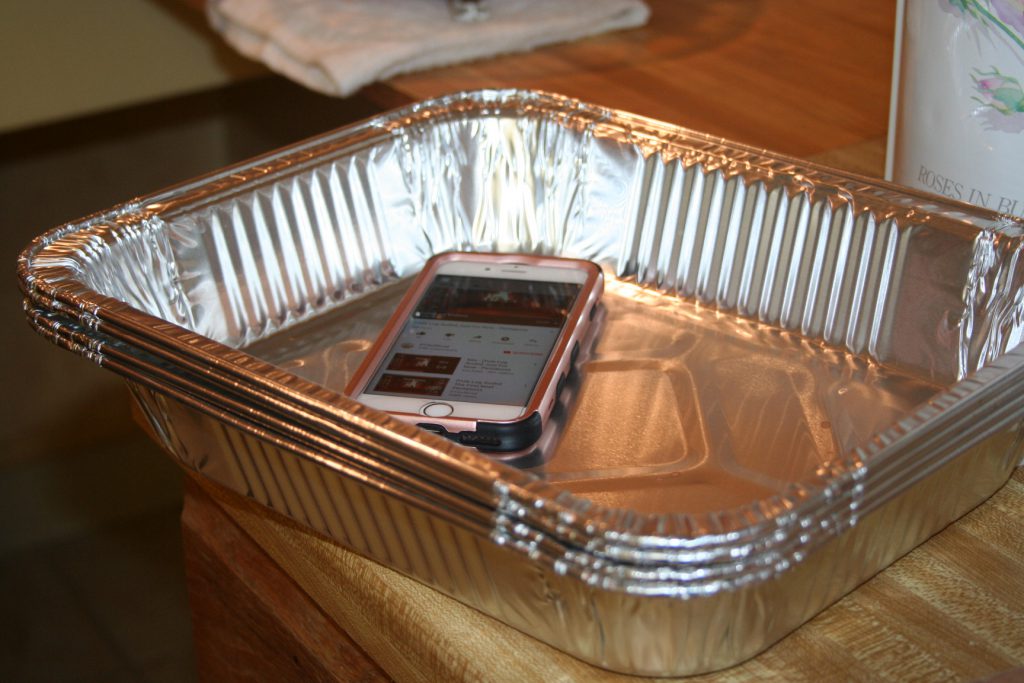 Yep, an amplifier so we could hear the music a bit better.

I printed out some Jesse Tree ornaments and started coloring them. Unfortunately I’m a bit of a slow, precise colorer. So, I still had about 18 to color that day. Tiffany helped me, okay, maybe I helped her, because she is much quicker than I am at it.

But then we had to get busy doing some other things and I still had one I hadn’t finished. So I had some help. 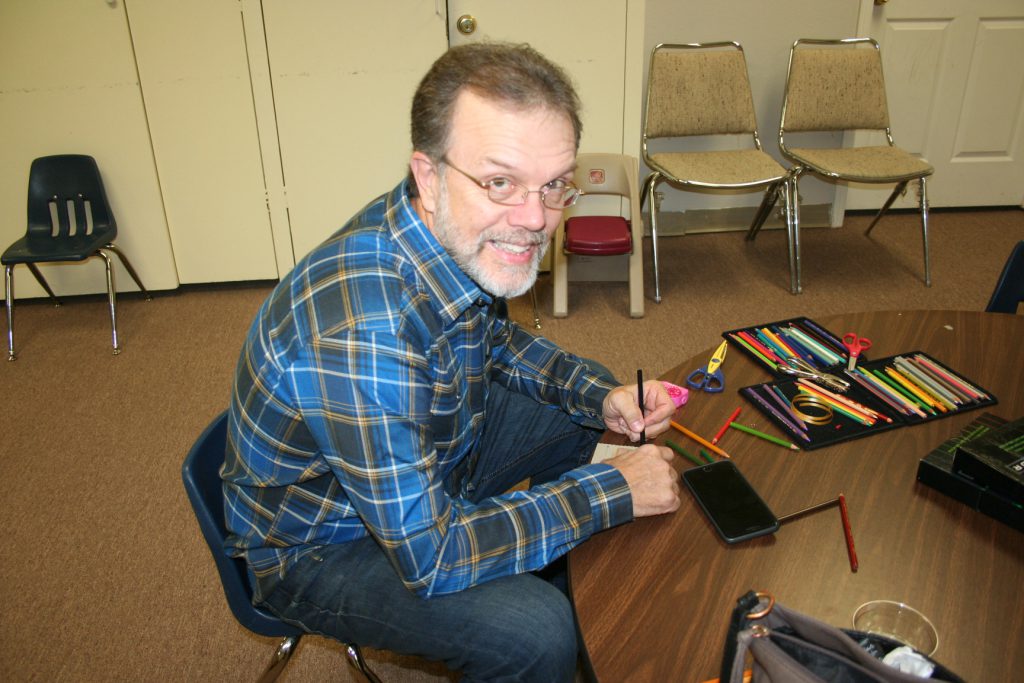 My hero! Thanks babe!

I had a great serving team come in early to help! 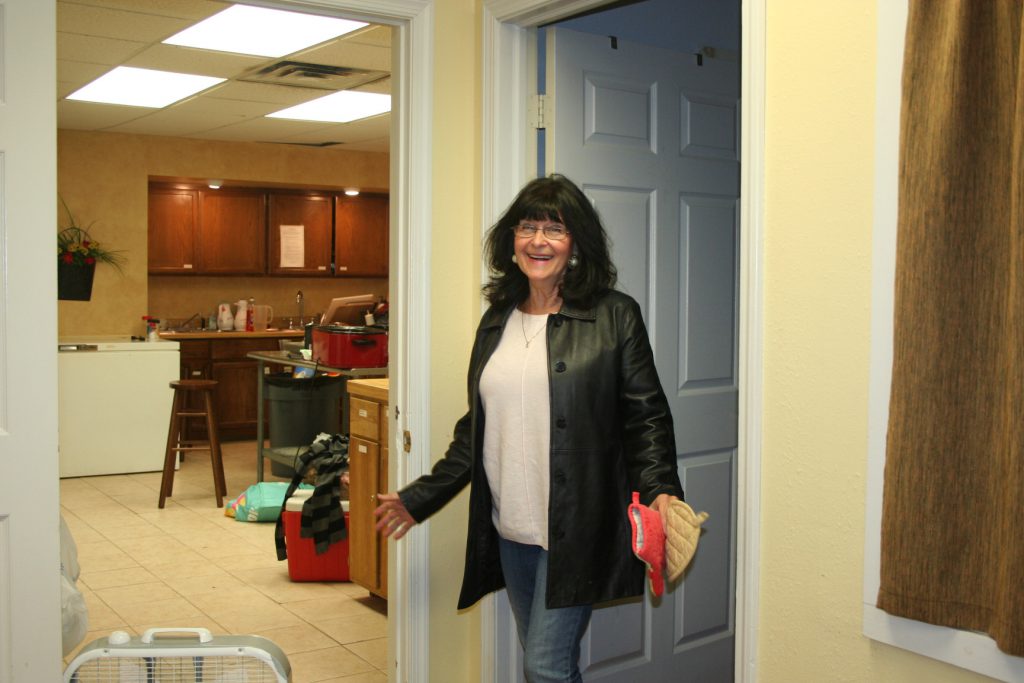 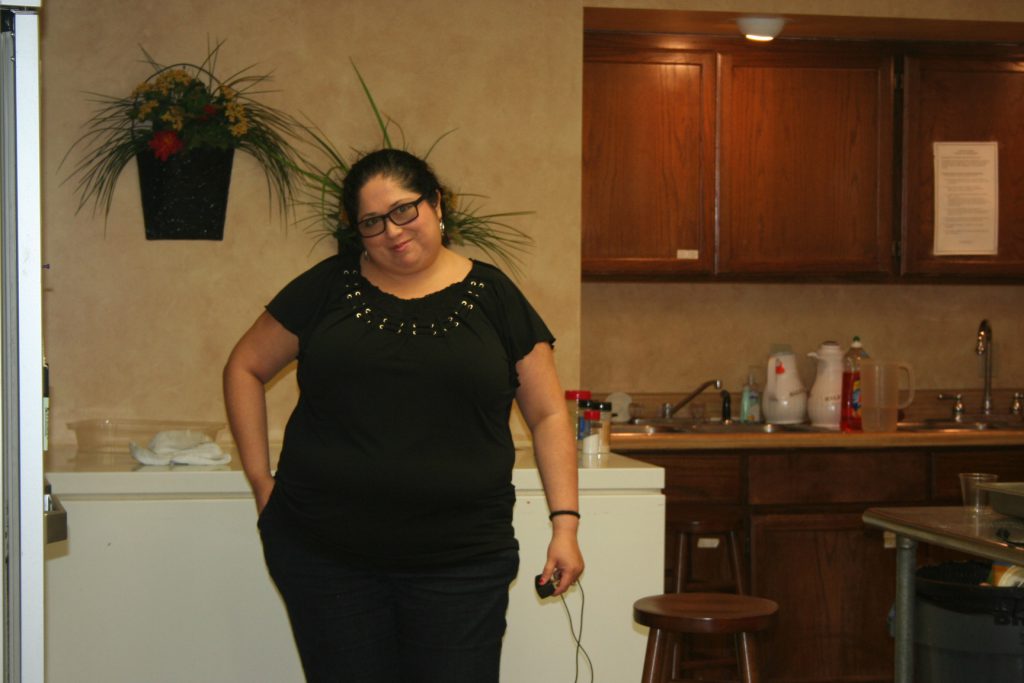 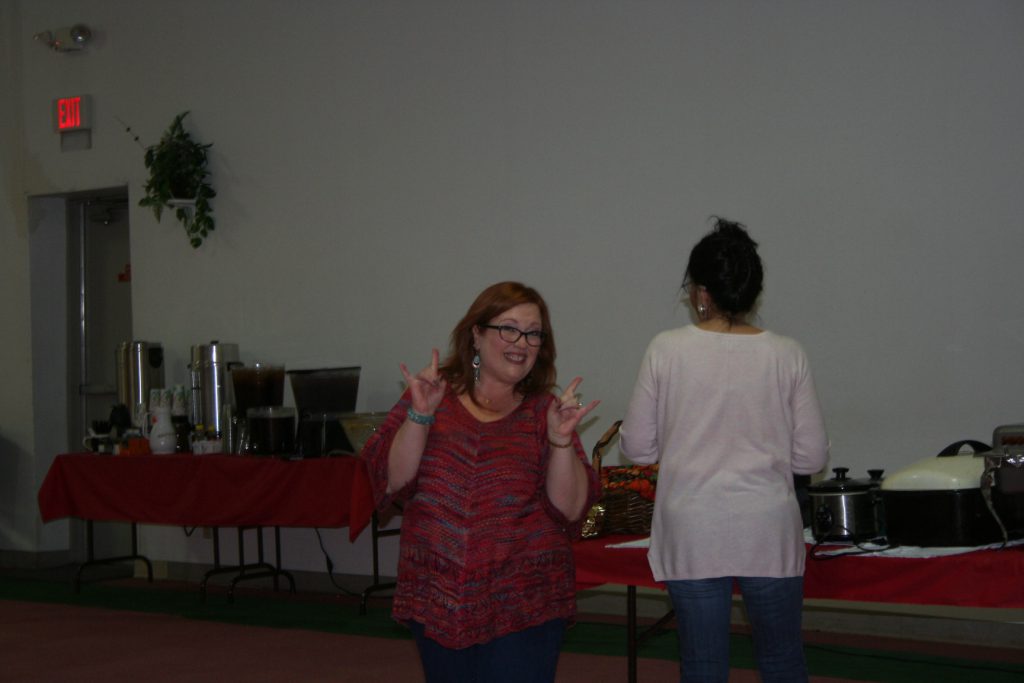 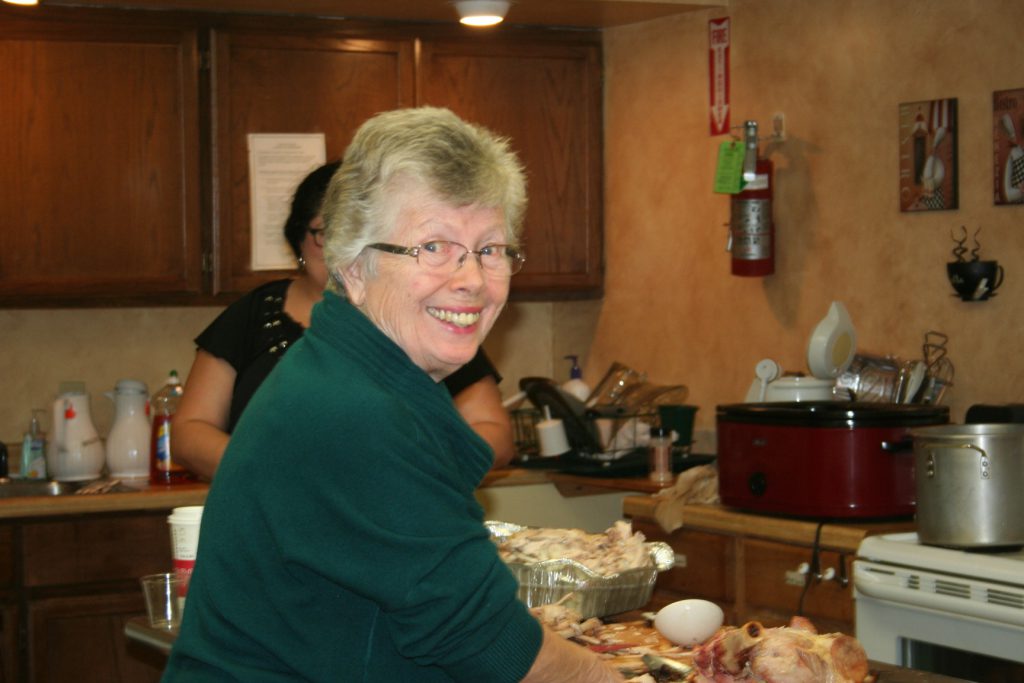 Each person took their plate to get their food. 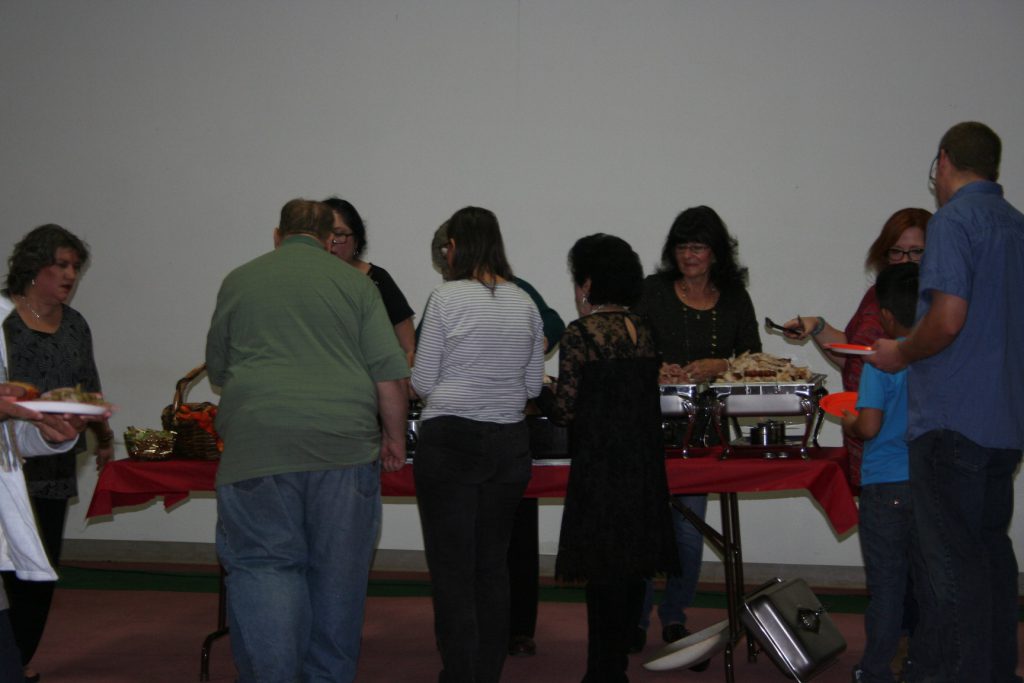 We had some entertainment in each section. (We didn’t get pictures of all of them. 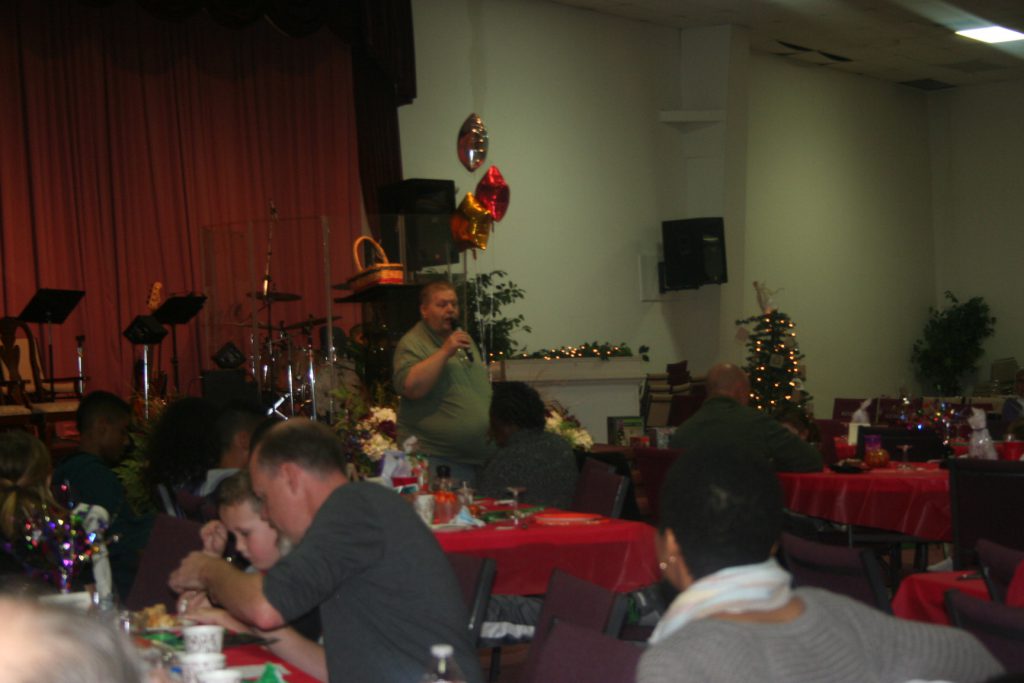 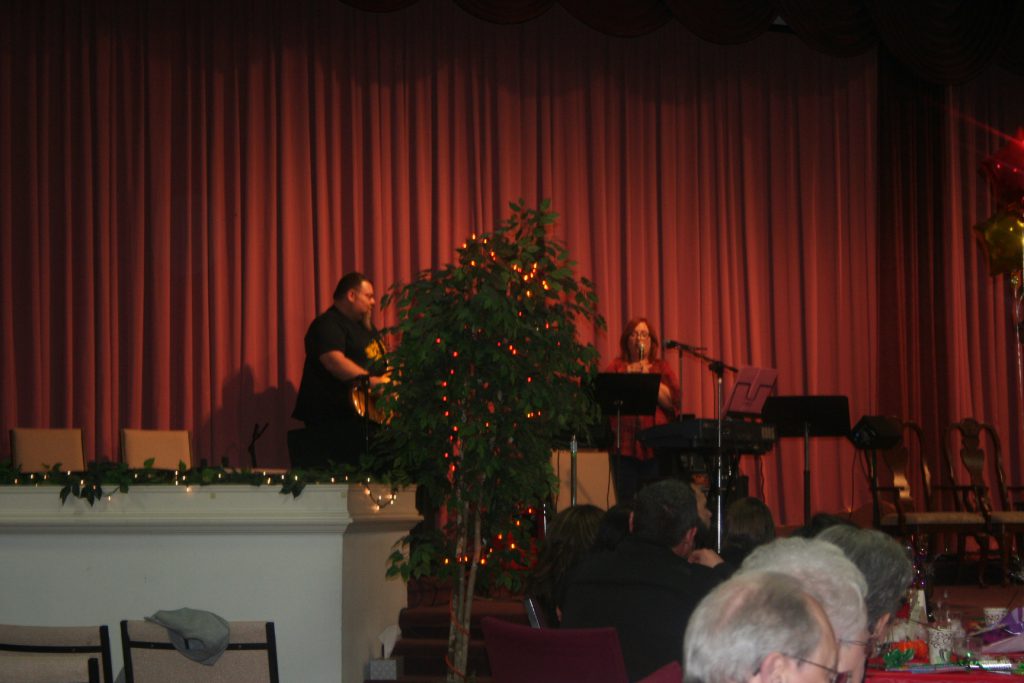 We played games. One of them was a Christmas Bingo. I kept the words from last year but did not keep them in a covered container and I believe I lost some somewhere because obvious words like Joseph and Mary were missing. :\

We had door prizes and prizes for winning bingo. We got to learn a little bit about the people at our table. We had a man that had been a deputy at our table.

At the end of the night, I had Sean play a countdown video as everyone was poised with their horn and sparkling juice, and rang in the new year together. After which, every one pitched in and helped us whip the place back into shape for service on Sunday. 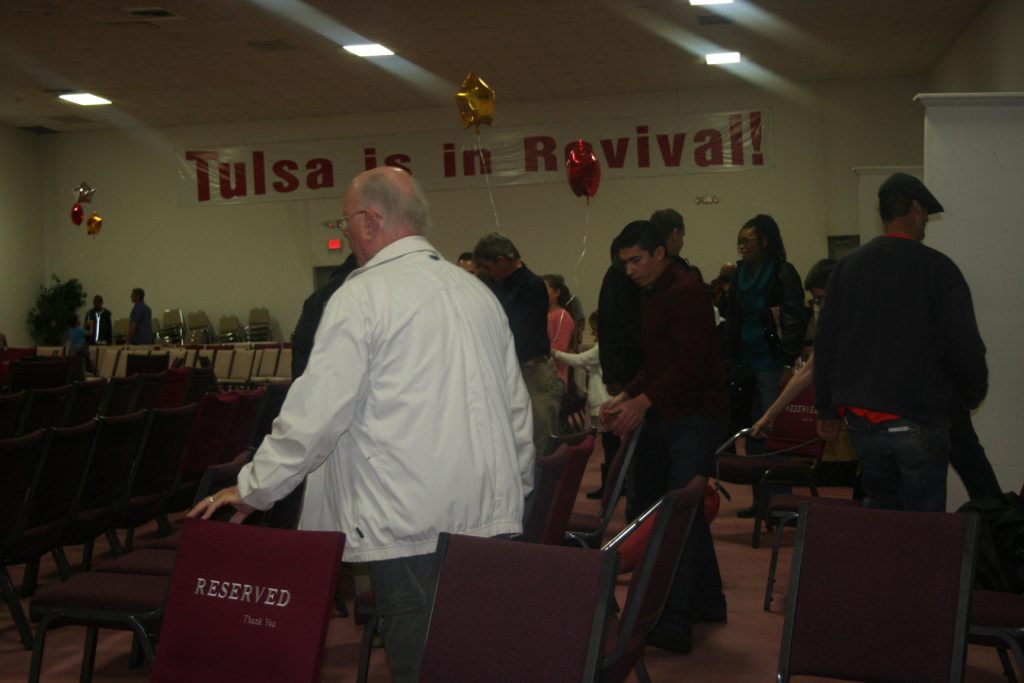 Of course, we had such a mess in the kitchen that it took us an extra hour and a half to get it cleaned. So thankful that we had some extra help volunteer to help us do that.

Saturday I crashed for about 4-6 hours. I made chocolate chip pancakes, my new favorite pancakes (from the new Trim Healthy Table Cookbook) for breakfast. Tiffany made the whipped cream and chocolate sauce to put on them.

Then we chilled and watched some Eureka while the guys helped move a dining room suit and stuff to my sister’s house. Then I unpacked some Trim Healthy Mama package of goodies, made dinner, and made two no bake cheesecakes, one for my brother-in-law and the other THMified for us to eat at his birthday celebration on Sunday.

Sunday was a WONDERFUL day because I got to see this little cutie!!! 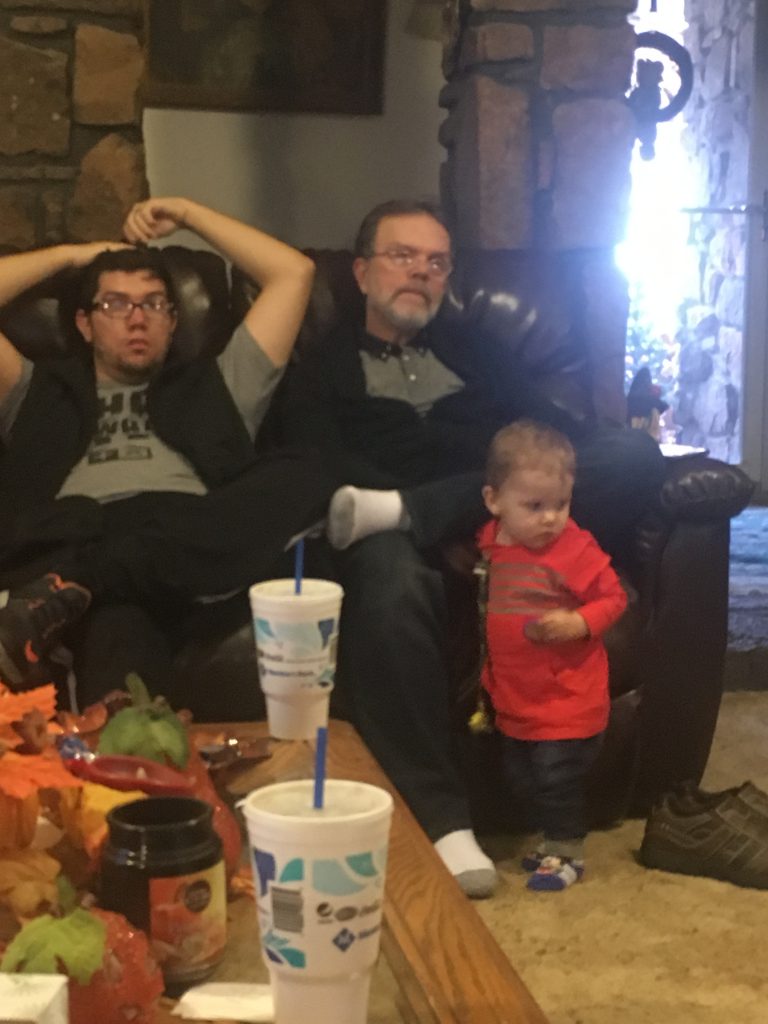 He kept going to his grandpa! It was so sweet. I was thrilled that he was so excited when he saw me! I was afraid he’d forget me. Love him to bits!

We had more stuff go on this week but I’ve rambled long enough for one day. I’ll share more next week.