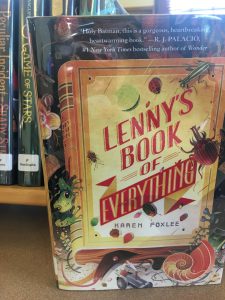 This is another of those books I found at the library a couple months ago that was about siblings that actually got along. The only other thing I knew about this book going into it was that they younger brother had rare form of gigantism. Consequently I assumed it would end up being a sad book but was interested in the sibling relationship.

Lenny’s Book of Everything by Karen Foxlee

Okay, I’m just going to be honest . . . this is a hard book. It did not capture me–I had to push to keep reading it. There is a lot of loss in this book.

I guess I should start by telling you a bit more of what the story is about. First up, Lenny is short for Lenore and is a girl who is three years old when her brother is born. The book starts out very somberly! with the mother having a feeling something was wrong with her newborn. This is given credibility because it is like the feeling she had the day Davey was born, which is shared in the beginning.

Lenny’s father was in and out of their lives the first several years. So this is also a story of a “single” mom with two kids and how she handles it but told through the eyes of the children.

A few things to consider:

My recommendation is to definitely use this one as a read aloud, so that you can stop and discuss things as they happen. Talk about why Lenny thinks Mom lied in the letter and if it is really a lie. Talk about if Lenny should have met GAE. Talk about what meeting GAE did to her relationship with Davey and the adults in her life.

There is also the “dark heart feeling,” which is mentioned from the very beginning of the book. I would describe it as a sense of foreboding. Other phrases that are kind of similar

This book is a bit heavy. It does show siblings in a good light. Ones that enjoy sharing things with each other but how sometimes they can be embarrassing and how to deal with those feelings.

OH! I almost forgot to mention: if your child is into beetles or birds, they will probably really enjoy this because Lenny finds she is intrigued with beetles of all kinds and Davey is enamored with a Golden Eagle and later Falcons. Definitely a fun part of the book

I also enjoyed how they looked forward to the parts of the encyclopedia showing up each week and how they would pour over them. There is also the mention of a few television shows in the 60’s and 70’s as well as the mention of the moon landing.

There are probably more things I should mention, like I think Mrs. Gaspar is Catholic, vandalism–which is immediately dealt with, and friendships.

As you can see, I had mixed feelings about this book. I hope I have shared enough that you can decide if it is a book for you and your children or not.